Join Pinkbike  Login
The ChainReactionCycles.com/Nukeproof downhill team raced at the first round of the Irish National Points Series at Rostrevor, Northern Ireland, last weekend with mixed results. It was a super tough track where team rider Matti Lehikoinen took the win, but unfortunately 2 team riders ended up in hospital after heavy crashes. 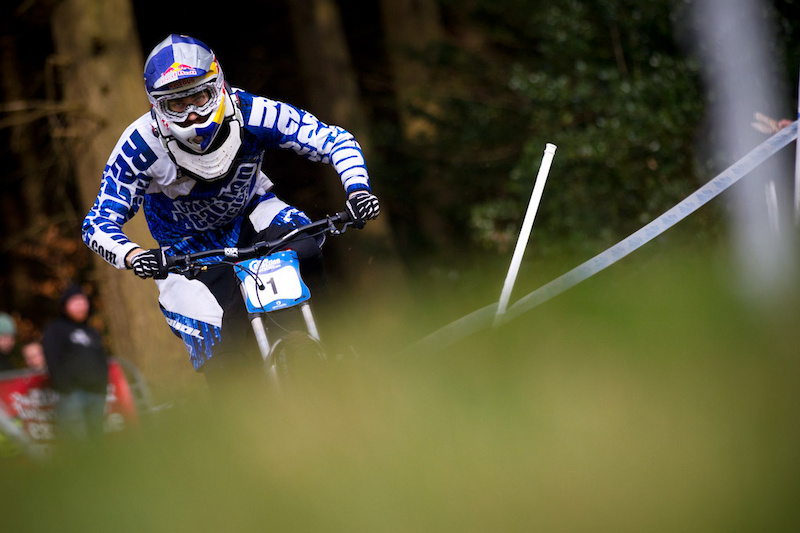 I will start on the positives, with Matti Lehikoinen taking the win, and the fastest time of the day and Joe Smith placing third only one second down – so a big congratulations to those guys from the whole team. They are both looking strong early in the season leading up to the World Cup races. 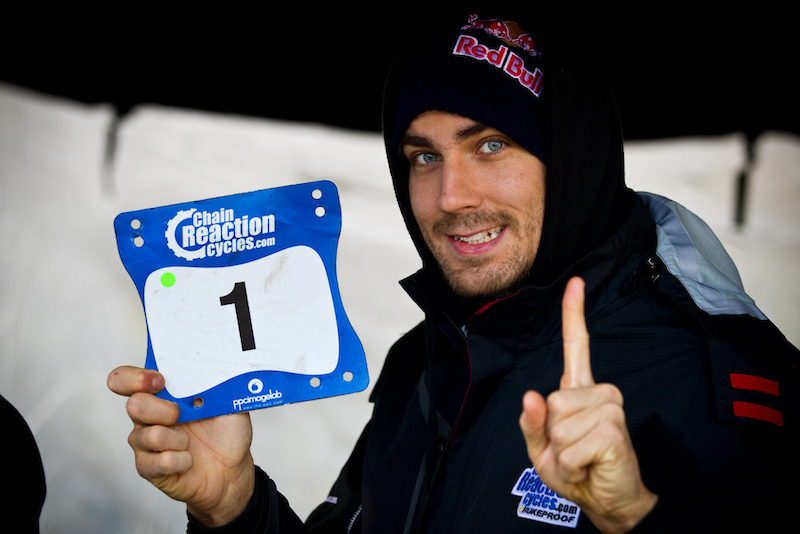 On the downside, we had two team casualties from the weekend. The track at Rostrevor is really rocky, pretty slow and technical but very awkward in places, with unpredictable rock sections and to add to it the track was really greasy and slippery making it very difficult to have a clean run.

Lewis Buchanan had a nasty crash during Saturday morning’s practice when his front wheel slid out on a slippery rock drop and piled his right shoulder into the rocks, and dislocated it. So myself and Lewis went off to hospital to get him some morphine and have it put back in. Very painful for Lew but he is doing OK now. 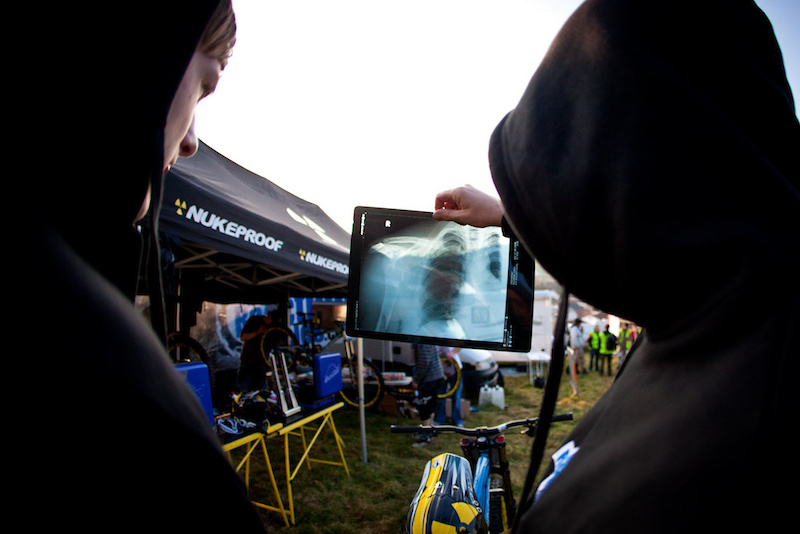 Lewis and Pagey checking out the X-Ray
In Sunday’s race, Matt Simmonds – who was looking amazing on the track throughout practice – caught his pedal on a rocky straight and smashed into some rocks, banging his knee up pretty bad. Matt rode down the rest of the track but looked in a lot of pain and for a guy that never complains he didn't seem too good.

I suggested we go off to hospital to have it checked out, so it was back to Daisy Hill hospital in Newry for the second time in 24 hours. It turned out that Matt had broken his patella in two, so it was a huge disappointment again. Matt and Lewis have worked so hard on their preparation for this season, so we are all devastated for the pair of them. It looks like they might both have to miss out on round one of the World Cup in Pietermaritzburg next month, but only time will tell. They will be back on their bikes and racing stronger than ever as soon as possible. 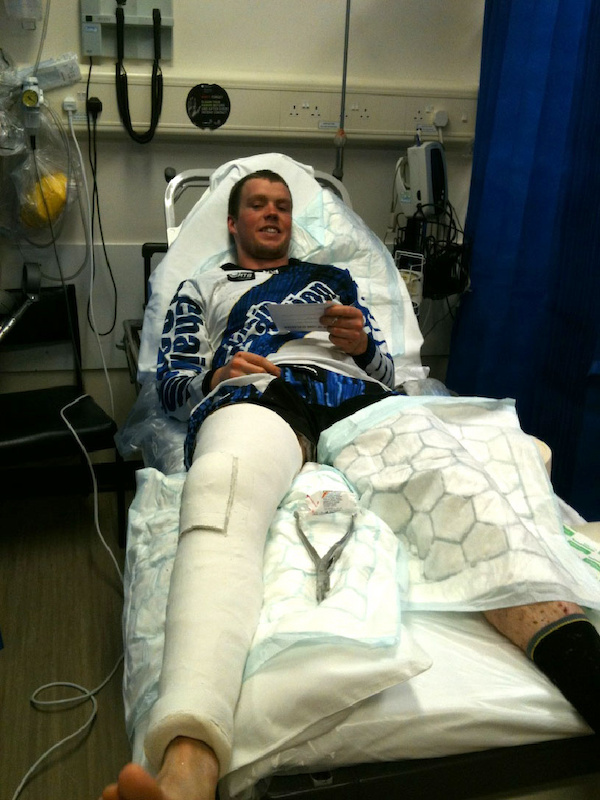 Matt layed up in hospital with a broken kneecap
I could only manage a second place this week in the Masters losing out to local boy Andy Young by two hundredths of a second, but well done to him. Congrats also to Michael Cowan from Chain Reaction Cycles who placed third in the Masters with a great time. 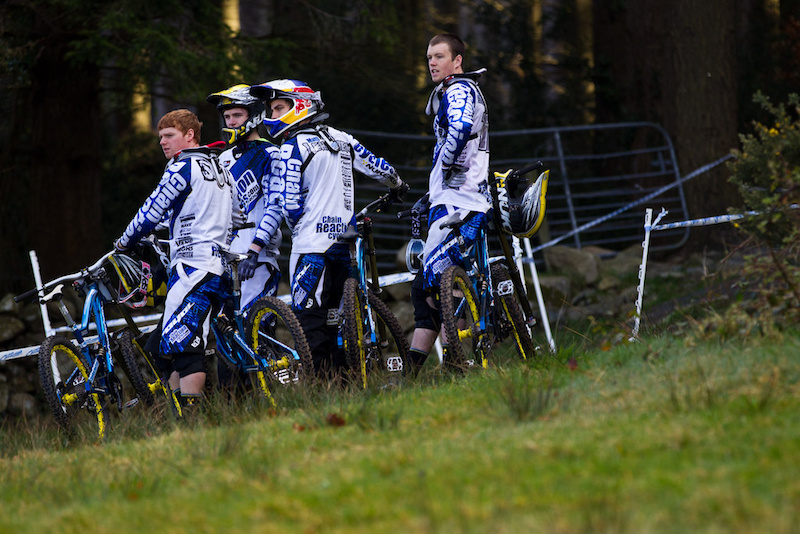 The Team checking out the course 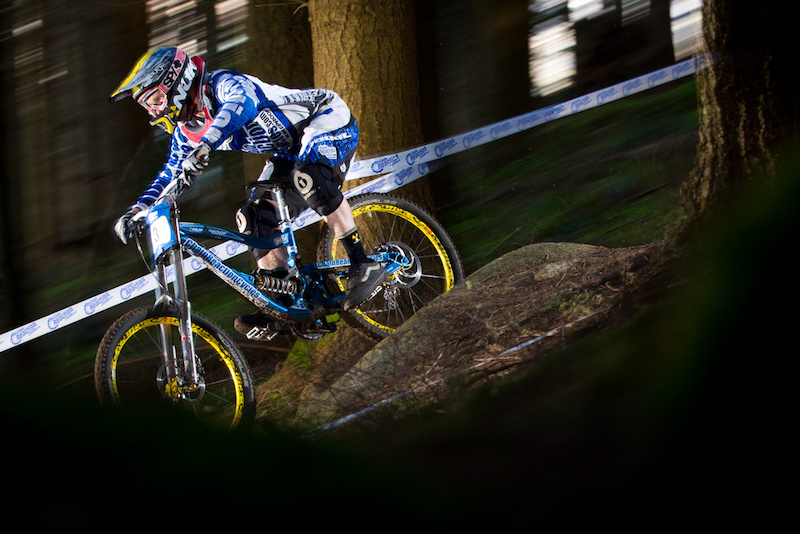 Joe Smith on the rocks of Rostrevor
Another positive from the week was that we got some great filming and photographs done earlier in the week with MTBCut and all picked up our amazing new Nukeproof Megas. It was also great to catch up with our 4X riders Lukas and Michael Mechura who came over for the week, and we had a great time hanging out with all the CRC guys who always look after us so well.

The Irish National was well run and well put together. The depth of talent is really good and it was a great atmosphere. 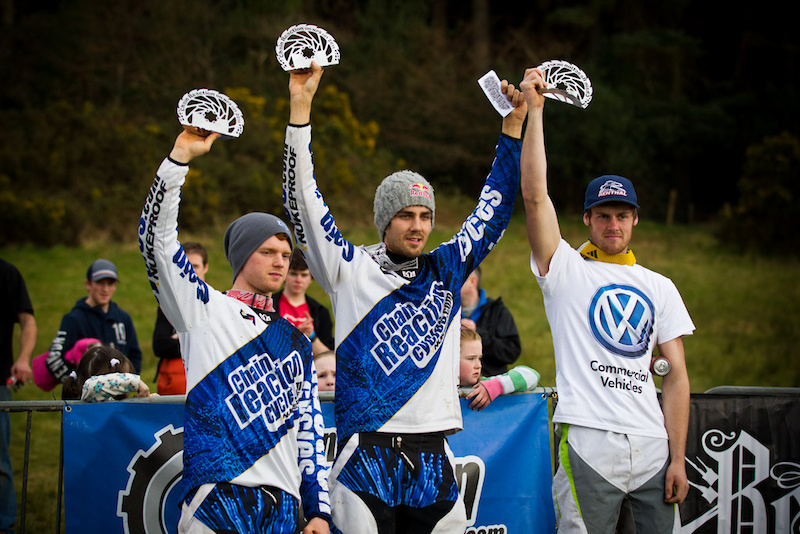 The Elite podium... left to right Joe Smith, Matti Lehikoinen, Dan Wolfe
Thanks very much to Michael and Tina for all their help this week, Carl and Brooks for their mechanical skills, and the guys from MTBCut.

Our next race is in two weeks time at Moelfre, North Wales for round two of the Halo BDS.

supercaly (Mar 28, 2011 at 14:33)
oh man i saw that crash when he broke his knee!! it was scary to watch. i had already finished my run and was walking up along the track to watch when he flipped fight over his bike.

Maverickdh00 (Mar 28, 2011 at 13:49)
Good win, Congrats to Matti L welll deserved hes had his hard times too! Ah hate seeing injuries, but many of us are not wearing as much protective gear as we used either, especially us mere mortals! Most of us me included wear FF, neck brace and soft shell knee pads, TLD bones in my case but not as good as say full length RF FRs or POCs full knee guards and upper body armour!,Knee braces anyone hard one Moto pretty much std, Fabian even won a race in Maribor wearing a CTI knee brace! Hate seeing injuries, but part of the sport get best wishes and get well soon, the bikes look great, though like the team hug group photo, CRC could be one to keep an eye on this year!

tinfoil (Mar 30, 2011 at 8:13)
I did my shoulder a month ago, missed half my competitive ski season. Hang in there man, and be really careful with it. Vibes to both of the newly created gimps. There is nothing more gutting than an injury during the season.

RaleighVoid (Mar 28, 2011 at 14:06)
depending on severity, shoulder dislocation can heal and ready for riding (but not completely) in 4 weeks ish. i did the same to my shoulder two weeks ago, but i should be good for scotland over easter.

letsgetit (Mar 28, 2011 at 15:36)
Hate to say, but you get used to it eventually. After a while it only takes a couple of days. I just had mine completely rebuilt over 2 surgeries ( healing from the second just in time for great weather

) If you have the chance, GET IT FIXED!!! I've been dealing with mine for about 13 years and just now getting it done. ( old MX injury )

Get well soon guys! Feel for ya!

RaleighVoid (Mar 28, 2011 at 15:46)
yeh, my doc says not everyone needs the op, (he said i dont have loose joints eg i cant touch my toes) but i think i do want the op, maybe in december, n be fit for the next summer. or just keep doing these rotator cuff exercises and stick to em. we'll see. appointment in two weeks. must be gutting for a pro to be injured, i'd cry.

letsgetit (Mar 28, 2011 at 15:56)
Wait for winter if you need it for sure! I tried that too, but mine was so jacked they had to do it in steps. The second step landed in March of the earliest spring they have had in Germany for 100 years of course!

Good luck though man, the ops suck donkey balls! Hope you get away without! I had 50 x-rays over the years and thought I was going crazy for a bit until they did the MRI with contrast. My bicep wasn't even attached! Not sure how they miss that on a x-ray!
Can't imagine having to sit out and watch at that level.

MTBcut Plus (Mar 28, 2011 at 7:02)
Lew could be back in time for South Africa, Matt will certainly miss it but is aiming to make a return at Fort William... That is a tough target from a broken kneecap though! Look out for a video from us soon on the event/injuries, including a GoPro of Matt's race run crash...

All the best to both Lew and Matt from us, we know they'll come back stronger.

Colin994 (Mar 28, 2011 at 14:56)
broke the same right knee cap around the same time last year. hate the timing of it because its right when you want to go out and ride during the spring but i wasnt back and doing as well as i should have been until july, and still I may need surgery so knee injuries are no joke good luck with the recovery though love the new bikes!

cooldudethatate (Mar 28, 2011 at 11:20)
Time for some knee pads matt or some better knee pads something with a harder less pliable shell

HARDCOREy (Mar 28, 2011 at 17:20)
Knee guards look soooo 2004. It's a good thing people only use soft ones now because we all know you never hurt your knees when you crash anyways.