Join Pinkbike  Login
The third round of the UCI World Cup Downhill Series took place this weekend in the scenic village of Leogang, Austria where Greg Minnaar (Santa Cruz Syndicate, SRAM/RockShox) stepped onto the podium again with a third place finish to equal teammate Steve Peat’s career record of 51 World Cup downhill podium appearances. Aaron Gwin sets the bar high again with a brilliant run for first and Gee Atherton rides a very smart race for 2nd. Josh Bryceland and Steve Peat had decent runs for 11th and 12th respectively. Santa Cruz rider Cedric Gracia put his fitness to the wheels and placed 7th, just a tenth of a second shy of a podium position.

The series has been an exciting one so far as stellar performances by the youngsters are shaking things up with Steve Smith, Brook MacDonald and Danny Hart in the top ten. They are proving to be real contenders and it’s making this world cup season storyline fresh and exciting.

The week started with the Syndicate rejoining one another after Greg’s big win in Fort William. We had a birthday celebration dinner for Steve and had a merry time with all of us gathered at the rough-hewn wooden table in the rustic Priesteregg restaurant. We had “Tatar’s Hat”, a favorite dining experience of ours where you cook your meat on a flaming hot metal cone surrounded by a moat filled with broth, aka: “Moat Juice”, or as new Syndicate mechanic Travis Lucas called it the, “Meat Volcano”. 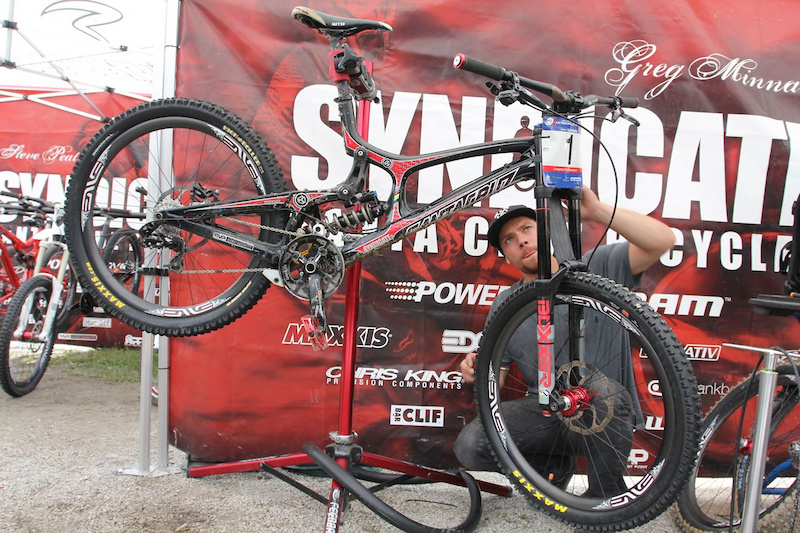 Practice unfolded each day under gray skies with a major dousing of rain each night. The track was well liked by all and was challenging with very technical wooded sections and fast pedaling sections, and the slippery mess the rain had brought. Tire selection was changing with the conditions. The qualifier went well for Josh with a 7th place, but Greg found himself wishing he had selected Maxxis High Rollers for the conditions and had a 8th place quali. Steve had a practice crash where he punched a tree with his left hand, but he hurt his right hand, as well. He ended up 17th in the quali and also felt the need to roll faster.

Race day Steve woke up to a very swollen hand and was unsure if he would be able to hold on. He gave it one practice run, and with the painkillers and adrenaline he was certain he could hang on for the race. Being the first of the Syndicate riders down with the conditions changing rapidly due to the sun making an appearance, Steve decided to be the guinea pig for the Syndicate and switched tires after scoping out the top corners before his start. Ricky Bobby made the wheel change from custom front forward cut Maxis Wet Screams to the new Maxxis High Roller II’s, which the boys had just favorably tested for the first time in practice. 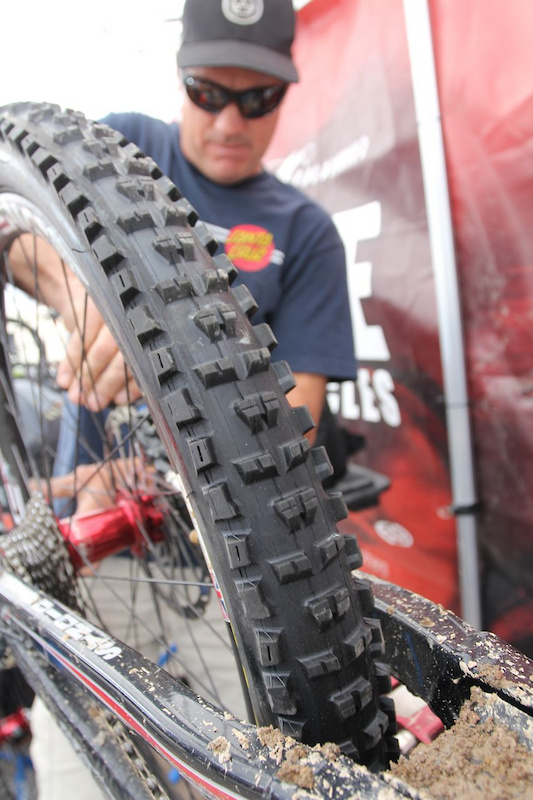 Steve started off quick and steady and was .07 faster at the first split than Brook MacDonald who was parked in the hotseat. By the second split he had put a little more time into Brook, but the last third of the course he kept stalling out and losing time, almost 3 seconds to Brook at the finish. With Greg and Josh starting 20 minutes later Steve radioed up to the mechanics that the Maxxis High Roller II tires were rolling like “Mother ________ers!” Greg and Josh both took his advice to switch and they made the wheel change.

Greg came down and unseated Brook with a time 3.5 seconds faster. Josh was next and struggled at the top and said, “I made a few mistakes early and spent the rest of the run trying to catch up. When I rode down the course I thought it was the wrong tire choice because it was sketchy, and when I got down I mentioned this to Steve and he acknowledged that and just laughed! But they did roll fast!” With riders falling all over the place Greg remained on the hotseat until Gee Atherton came down and took over the lead. As Aaron Gwin came down these two anxiously waited their fate, as he raced down convincingly to take the win by 2.11 seconds.

Greg said, “I needed to relax more in the top section, but I was really tense and that caused me to make two big stops in the top. Judging from my first split I lost my all my time in the top, but from the start of the technical to the end I was able to hang with the big dogs. Congrats to Aaron for putting together a really amazing ride. He attacked from the start and Gee ran a very smart race.”

Steve says, “I was going steady, but in the last third of the course I kept stalling out. I was moving forward and now I’m slipping back in points to 10th overall and I’m not too happy about that.” In the overall hunt Greg drops beneath Gwin with 582 points to Gwin’s 628, and Gee sits third with 527. Josh moves up from 14th to 12th and Santa Cruz Carbon V-10’s makes up 25% of the top 12 positions.

Special congratulations go out to Florian Pugin for her big win in the woman’s race! And of note, Steve texted today with prognosis from the doctor, he has a fractured ulna. That won’t keep tough “Old School” out of the hunt as he will brace it up and give Mt. Ste. Anne a go in a few weeks time. 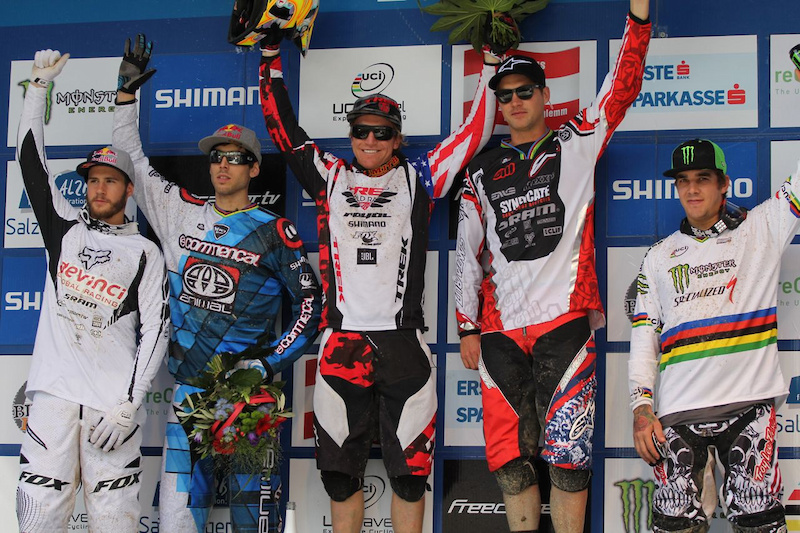 Thanks to the Syndicate sponsors: 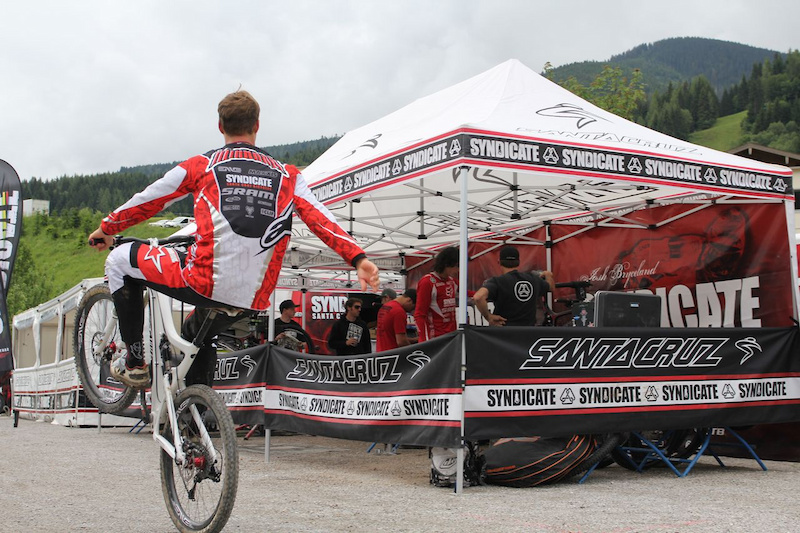 manchicken (Jun 14, 2011 at 14:58)
Steve knows that the fastest way down the mountain is straight but that ignorant tree messed things up for him, not impressed nature, not impressed

shijinkamisai (Jun 14, 2011 at 14:06)
get better peaty so you can keep rockin it oldschool and showing the kiddies whats what

goxbigxorxgoxhome (Jun 14, 2011 at 22:49)
the logo on the chainguide looks like the same logo as on the wheels -> Mountain Edge