Racing in China - A Different Perspective

Join Pinkbike  Login
For the past several years KS, Kenda, Neco, KMC, Prowheel and Novatec have been putting on a Bicycle Event in Shen Zhen, China. My good friend Ben Liao (Bear's Bike) is one of the organizers and he asked me if I would like to attend this years competition. I never turn down an opportunity to see a new country or ride in a new place. When I first talked to Ben I had just over a week to get the parts together to build a 4X bike. I talked to Ollie at Kore and he said he would be able to supply most of the components I would need for a new bike. I then talked to Simon from Saracen and he said he would ship a new Amplitude frame to Hong Kong. What better way to kill a day in Hong Kong than building up a new bike.

Hong Kong is an amazing city to visit during the day and at night.

The frame was shipped to Gravity Reaction Cycles on the Kowloon side of Hong Kong. It is a small shop that is easy to find and has an interesting selection of goods.

Gravity Reaction Cycles on the left and my fresh Saracen Amplitude with full Kore components on the right.

On Tuesday I built up a fresh bike and on Wednesday I was on the train from Hong Kong to Shen Zhen ready to race. 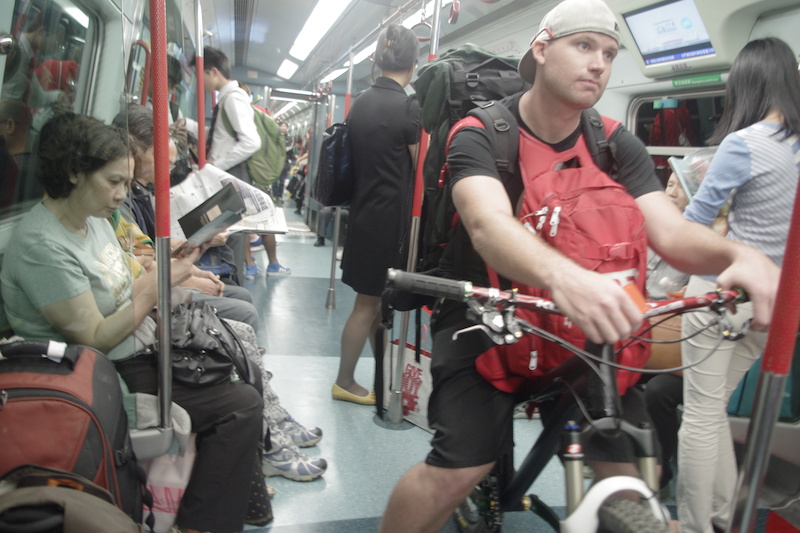 There are certainly things that a white face can get away with on the Hong Kong MRT.

On Friday afternoon I got my first chance to check out the course and put in a few practice runs. The 4X track is located in the garden of the KS factory, and my first impression was that I would be doing a lot of pedaling. Once I got my bike figured out and got to know the speed to hit all the oddly shaped jumps, I started to have a lot of fun. If I worked at the KS factory I would definitely ride this track everyday.

The garden 4X track at the KS factory. Continue reading for course video.

Saturday afternoon we rode until it was time for dinner, the owners of KS have a living facility at the factory complete with Japanese style Teppanyaki Restaurant. 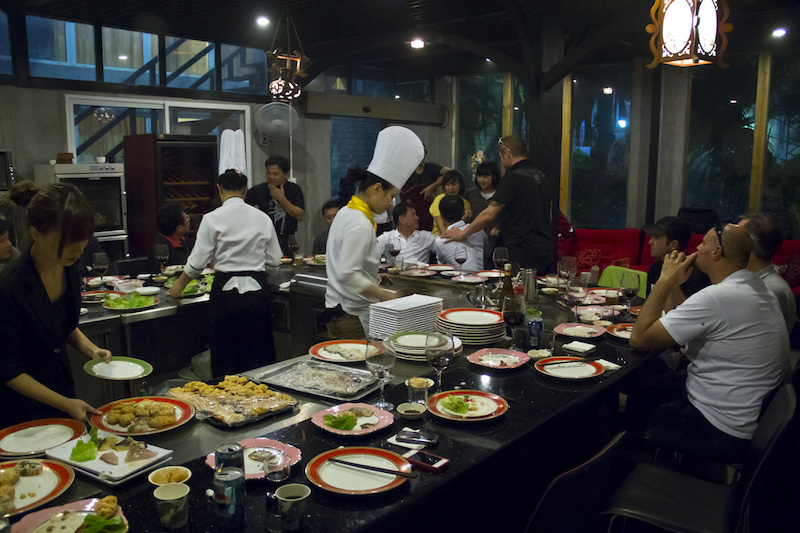 Private Teppanyaki meal served up the night before the competition.

At dinner I was sitting with my fellow foreigners, riders from the Santa Cruz distributor in France. I started talking with one of the frenchmen and we got on the topic of Brett Tippie. He said that he was in one of the original Kranked movies with Tippie and that is when I realized I was sitting with Dangerous Momo. If you do not know who Dangerous Momo is find a copy of Kranked 1 or 2 and wait for it. This goes to prove that Brett Tippie is bringing people together all over the world. 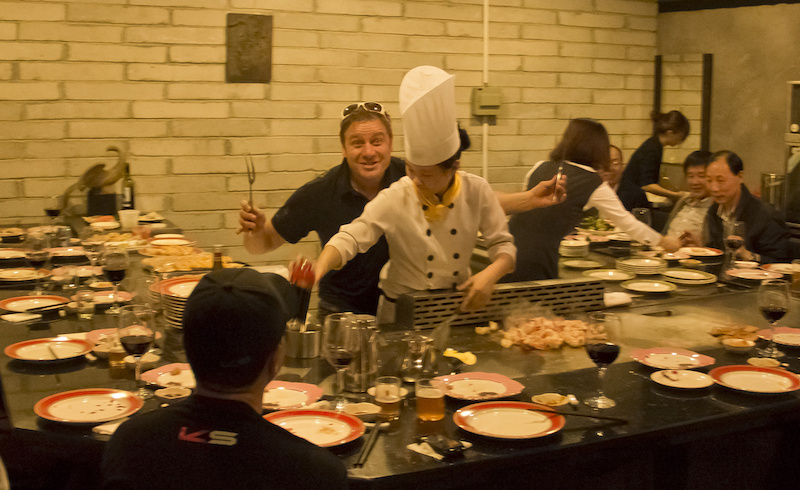 After dinner I went out and did a couple more laps under lights. It would be really cool if they installed some more lights and scheduled the 4X race in the evening. Hitting some of the jumps in the dark was a little bit sketchy to say the least.

When I showed up early Sunday morning there were hundreds of people walking around looking at the various booths set up. There was a XC race and a Trials competition at another location. I did not make it out to see them because I wanted to get a couple laps in before things got going. 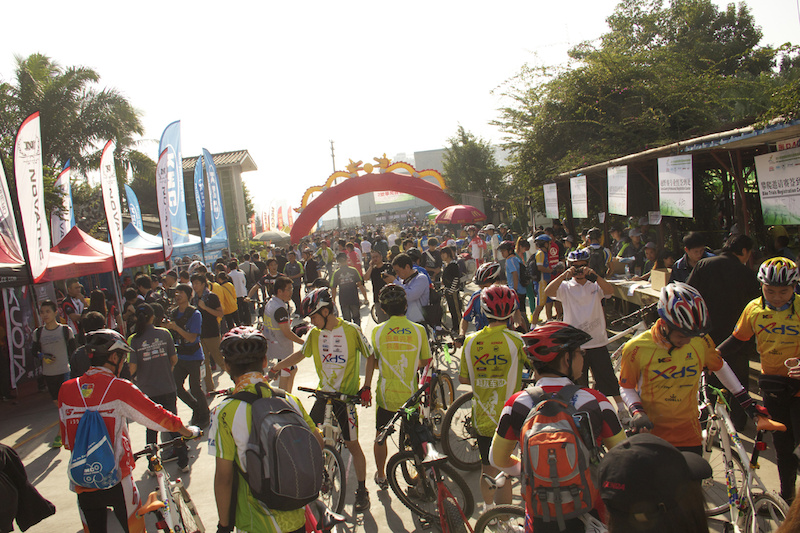 People Mountain People Sea, a good sized crowd showed up to take part in the event. 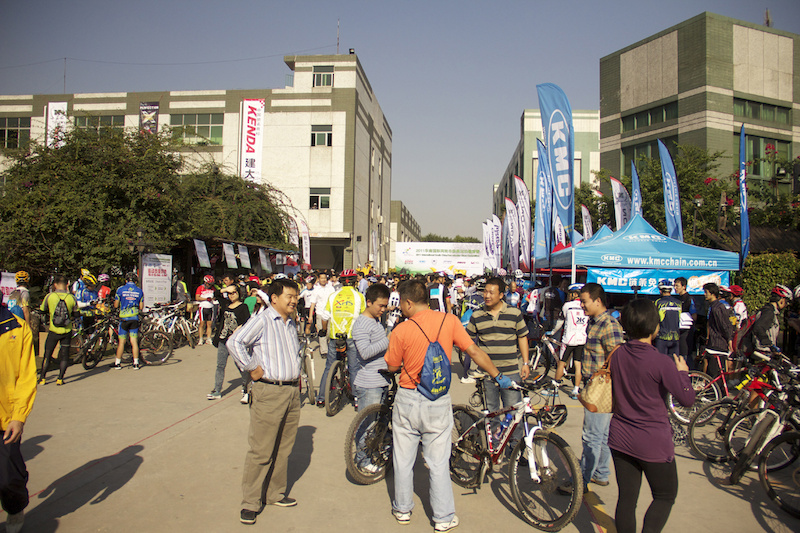 The BMX park is located next to the 4X track and things got started in there with a scooter competition at mid-day. I am not going to lie no one has ever lived up to Hansel riding a scooter in Zoolander, so I could not really get into watching, but I guess a double tail whip on a scooter is pretty cool. The large crowd that had gathered seemed to enjoy it. 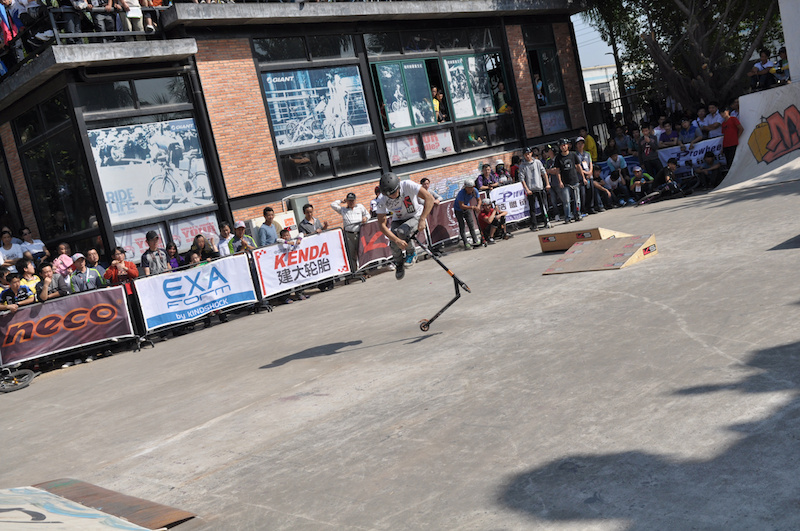 Hansel never whipped it this good.

After the scooters were all folded up and put back into their bags, the bmx guys (and a couple mtb guys) started warming up to compete. After everyone's first run they would take the best 12 scores and these riders would get a second run to see who would be the champion. The park course lacked flow but the competitors threw down some pretty decent tricks, double tail whips, 360 whips, 720's, 540's, a flip whip was even thrown after time was up on Taiwan's Li Yun Yi's run. I was impressed with the level of competition on such a small course. 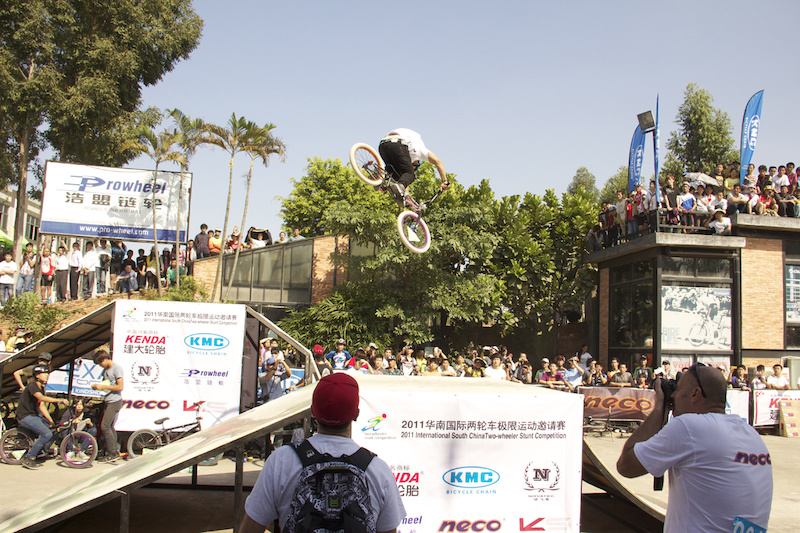 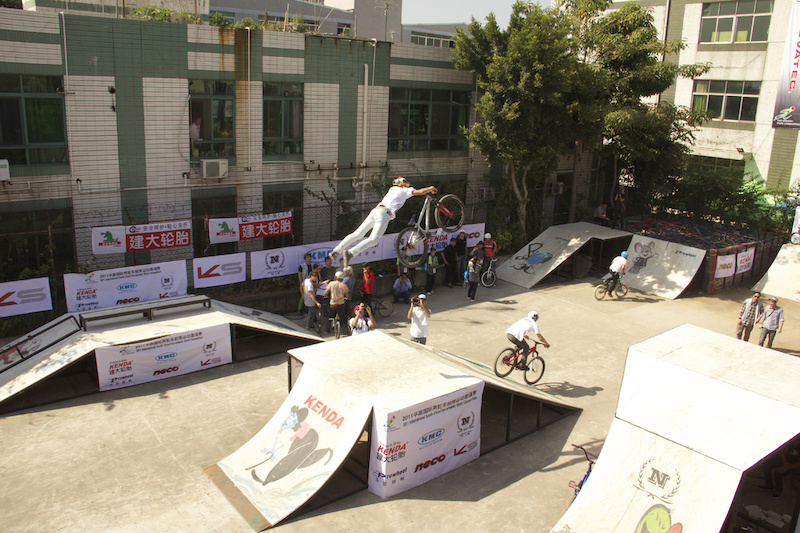 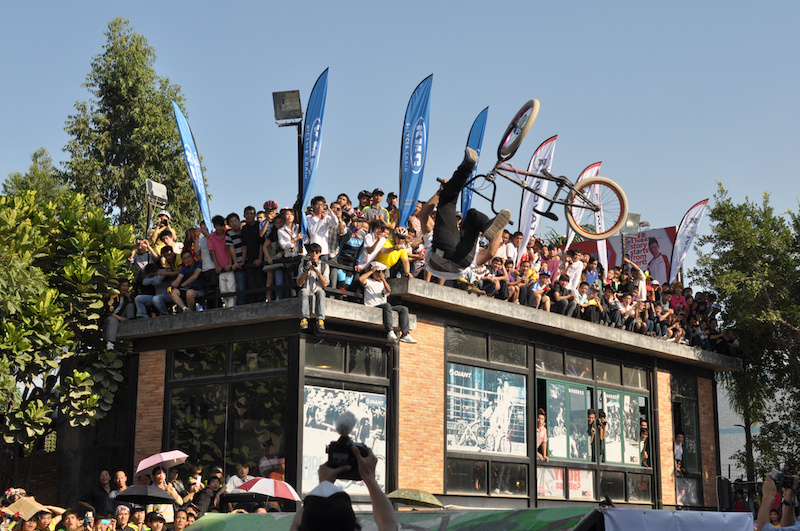 Taiwan's Li Yun Yi pulled this back flip tail whip after his run was over. If there was best trick prize given, this would have won. 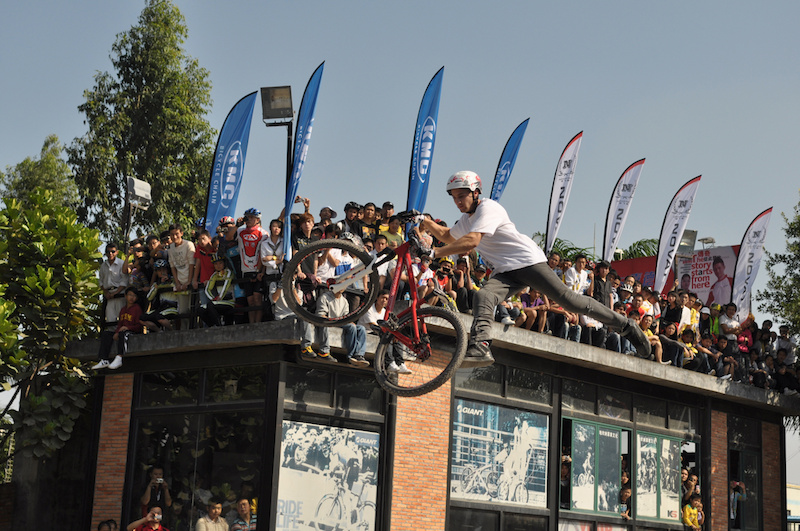 Tail Whip with a good number of people looking on.

For more photos from the BMX competition check out my album from the event.

With the bmx competition over it was time to go put on my retro red Roach pants and get in a last practice lap or two. With no electric gate, seeding being done by hand on a scratch of paper and bikes of all different shapes and sizes the atmosphere was pretty light. I joked with several of the guys on 20" bikes that they had an unfair advantage on such a tight course. 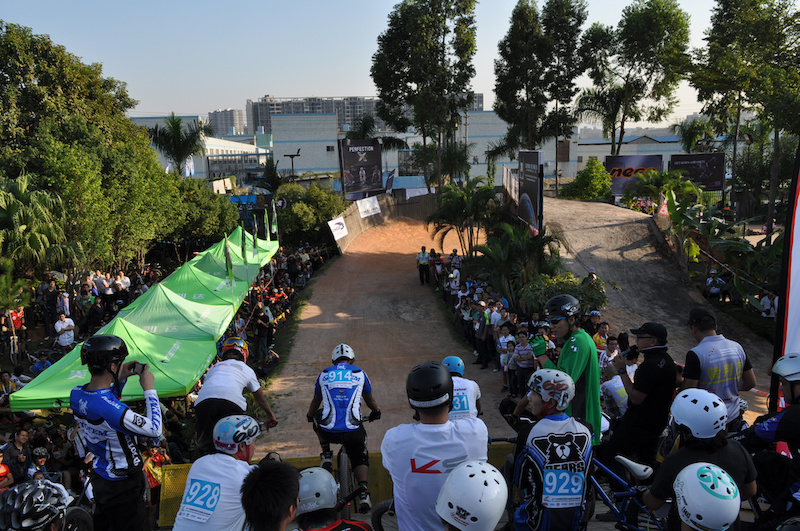 Having a good start on the course was pretty essential and lining up in the number one slot would definitely have an advantage. In my first heat I drew a three and was still able to get a decent start and finish in the top two positions and move on. In my second heat I drew a two and had a horrible start. I was fourth going into the first corner but was able to make up a spot before going up the hill into the second corner. I had little or no chance to catch up so I threw a no footer on the next jump and added as much style as possible for the rest of my run. 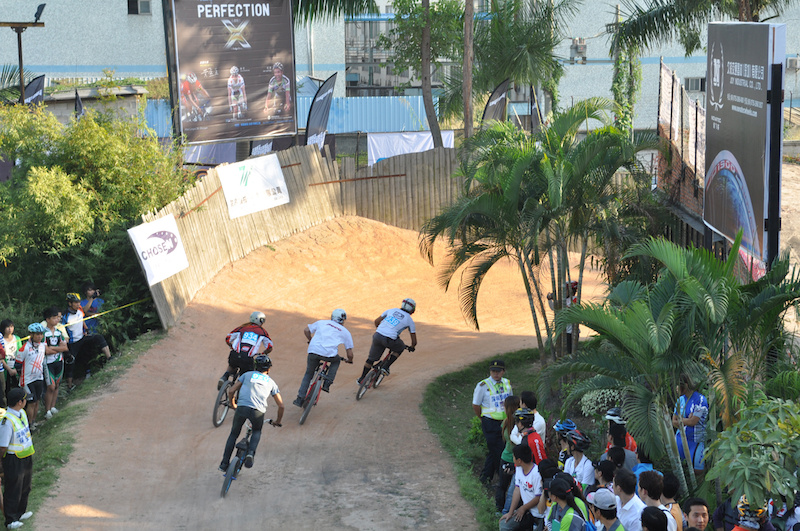 Awards were given out to the winners of all of the events and then a several course Chinese style dinner was served to all of the competitors. 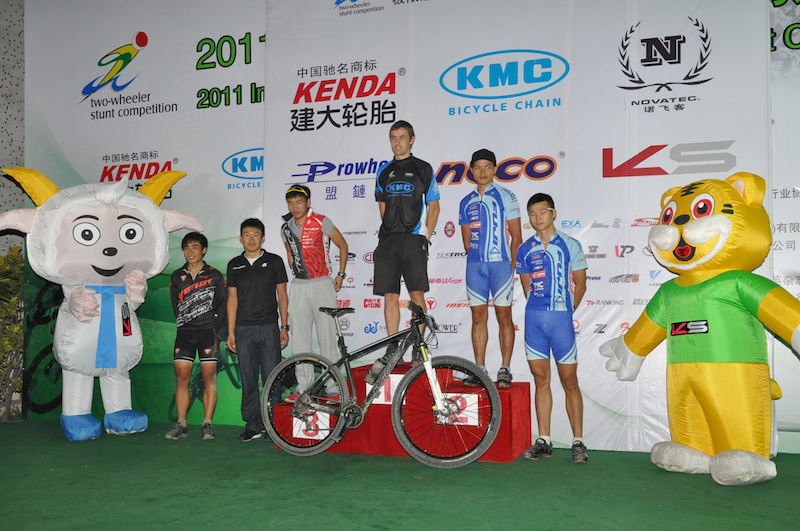 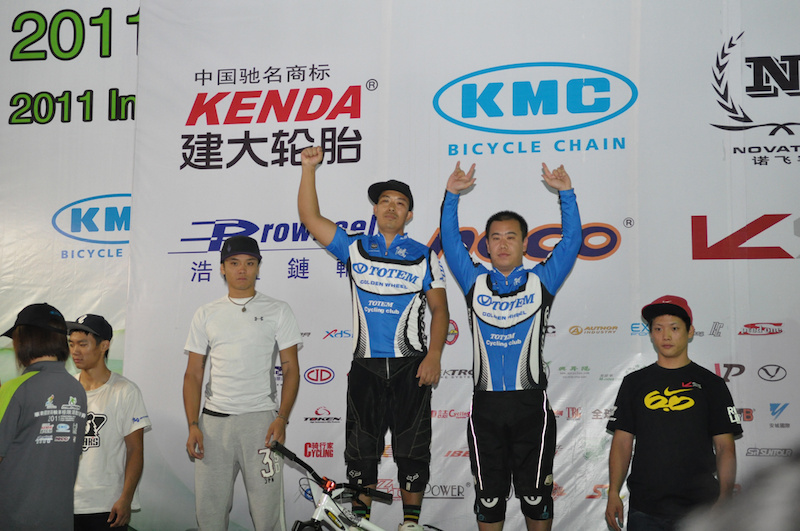 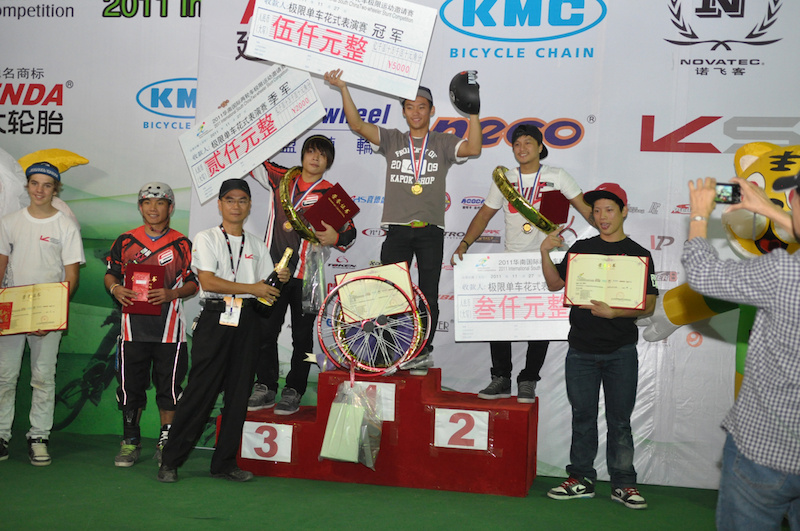 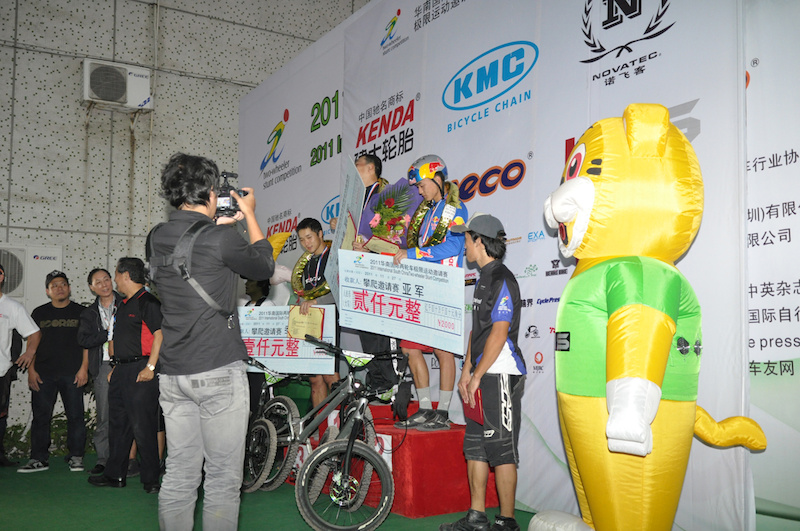 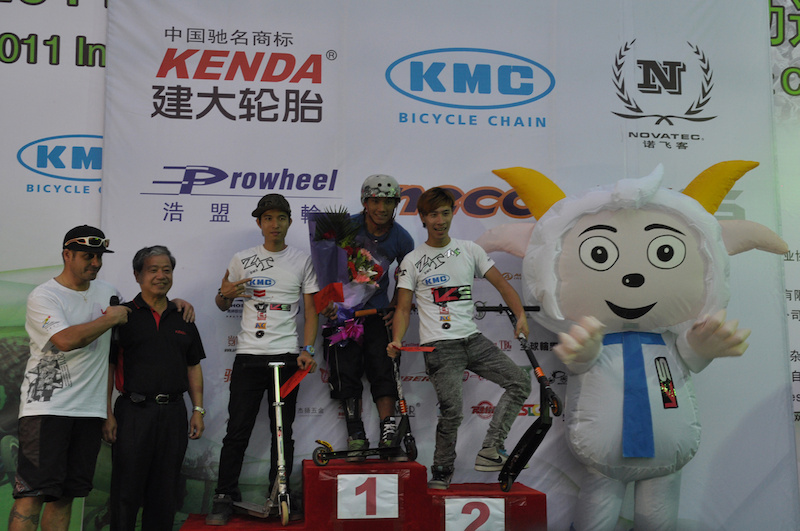 I think I only missed the picture for Women's XC, I am not sure it was getting dark, I was pretty hungry and the awards portion of the day was dragging on a little bit. 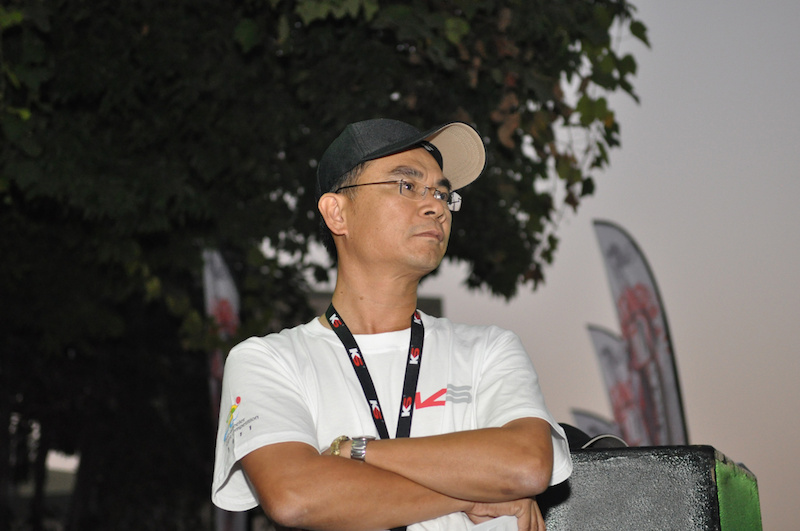 Martin from KS looks on during the award ceremony.

Maybe not the best competition in the world, but a decent event for sure. A good level of competition with a friendly atmosphere. A big thanks has to go to Martin from Kind Shock for hosting the event. I would also like to thank Ben from Bear's, Ollie from Kore and Ryan and Simon from Saracen. Without Ben I would not have had this great experience and without the other three I would not have had a fresh bike to enjoy it all on.

I really had a great time, I rode my bike in a new place, made new friends and got to see a new country. Below is a little video I shot that pretty much sums up my week in Hong Kong and China.

A Week in China

campofchampions Plus (Dec 6, 2011 at 22:24)
I love stories like this, having fun and traveling. Pretty much can't be beat. Well... Maybe better trails but you never know till you go and as long as you had a good time, it's never time wasted. Oh wait, biking is time well wasted. Ken

mountguitars (Dec 8, 2011 at 8:39)
you know how china names things don't work for them sometimes that's why they copy or use more western sounding names. check out cheng shin tubes (CST) to maxxis instead, what would you choose? well they're one and the same.

smike (Dec 7, 2011 at 21:25)
Awesome write up. I checked out gravity reaction cycles when I was in hk and was quite impressed. Nice to see that there's a budding DH scene there. Also nice to see other places in the world getting some coverage on PB. Keep it up!

bengalitiger (Dec 8, 2011 at 1:45)
yes, things are coming up for biking in china. of course xc and road, are already there big, but now DH races are coming more and more in numbers. next year they should be around 30 DH races. the 4X winner chan chan, i know him, i race with him often DH races here in china. and yes, of course they are not like in europe or in the states...

But really the unexploited AM/FR/DH scene is amazing considering what a mountainous country China is.

Opinions (Dec 7, 2011 at 21:01)
It's so cool being able to go around the world and experience different cultures and their take on life.

Iloper (Dec 8, 2011 at 2:52)
more people riding is allways a good thing. And the discovery of this sport is allways so interesting..

home-team Plus (Dec 8, 2011 at 6:53)
have a chinese friend in hong kong that said they go on the train with their bikes all the time and had to pass through security to get onto the train, so obviously it was not an issue. the white face getting away with anything was a joke, i have been in asia for over 8 years and have gone the extra mile to make sure i was not given foreigners a bad rep ...

mountguitars (Dec 8, 2011 at 8:42)
too bad bikes aren't allowed in singapore MRT's. i had to fuckin' ride all the way on my road bike or XC bike to join a race on the other side of the island at times. FML!

home-team Plus (Dec 8, 2011 at 8:47)
i was pretty surprised, i was going to bike bag it until my friend said that it would not be a problem, said the people at the train might want me to take my front wheel off, but they did not have a problem with it

kYing (Dec 8, 2011 at 14:00)
I'm one of "those" guys who's not the biggest fan of calling HK = China but whatever (i don't think you'll find any HKer happy with the handover, and technically HK is a "special territory"). White faces are not even close to being foreign in HK (it was a British colony for 99 yrs y'know...) which is why no one pays attention. You can definitely tell the tourists apart though, cuz' they seem to be under the impression HKers have never seen a white person before. HK has more in common w/ NY than with mainland China.

home-team Plus (Dec 8, 2011 at 17:24)
For the record I am not sure I ever called Hong Kong China, I live in Taiwan and know that feeling towards being called part of China. In most countries I have been in they refer to their Subway system as the MRT so I just assumed Hong Kong does too.
Below threshold threads are hidden