Photo Story: The Search for Ötzi 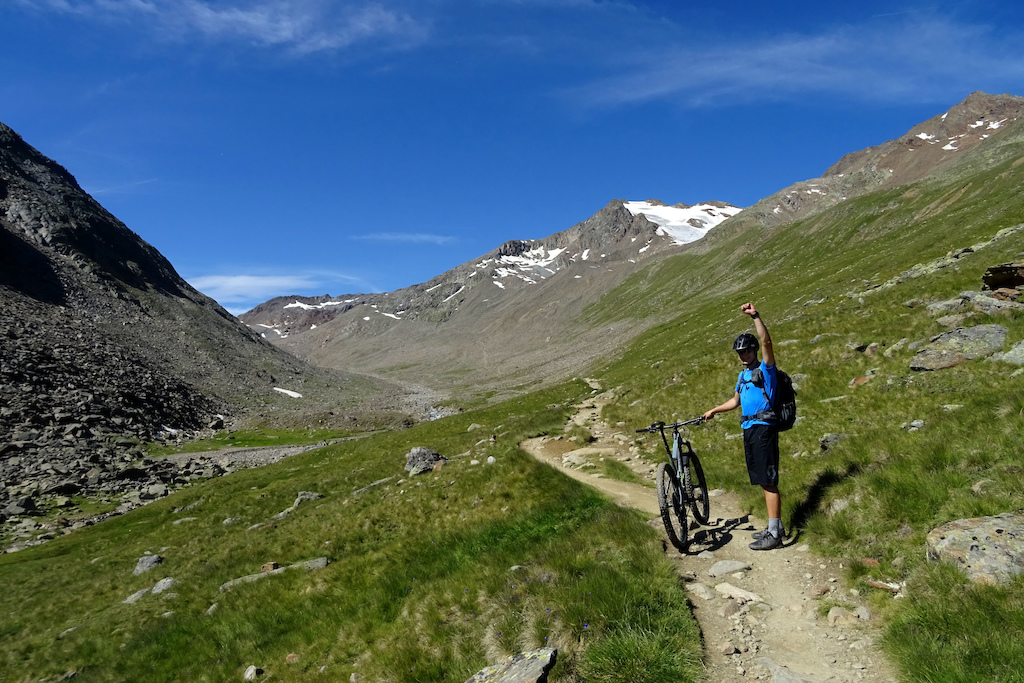 THE SEARCH FOR ÖTZI
by Matej Kodrin

Five thousand years ago a man was chased high in the Ötztal Alps where he was shot with an arrow and later bled to death. His body was found in 1991 due to melting of Hauslabjoch glacier. Perfectly preserved mummy was called Ötzi, Similaun Man or Tyrolean Iceman.

Ötztal is a true alpine valley located in the heart of the Alps, just an hour’s drive from Innsbruck via A12 Autobahn. The southern end of the valley borders with Italy and is accessible over Timmelsjoch mountain pass. From Sölden to Rettenbach glacier leads the highest paved road in the Alps, the Ötztal Glacier Road. The main industry in the valley is tourism and the Austrians know their business and they know it well! 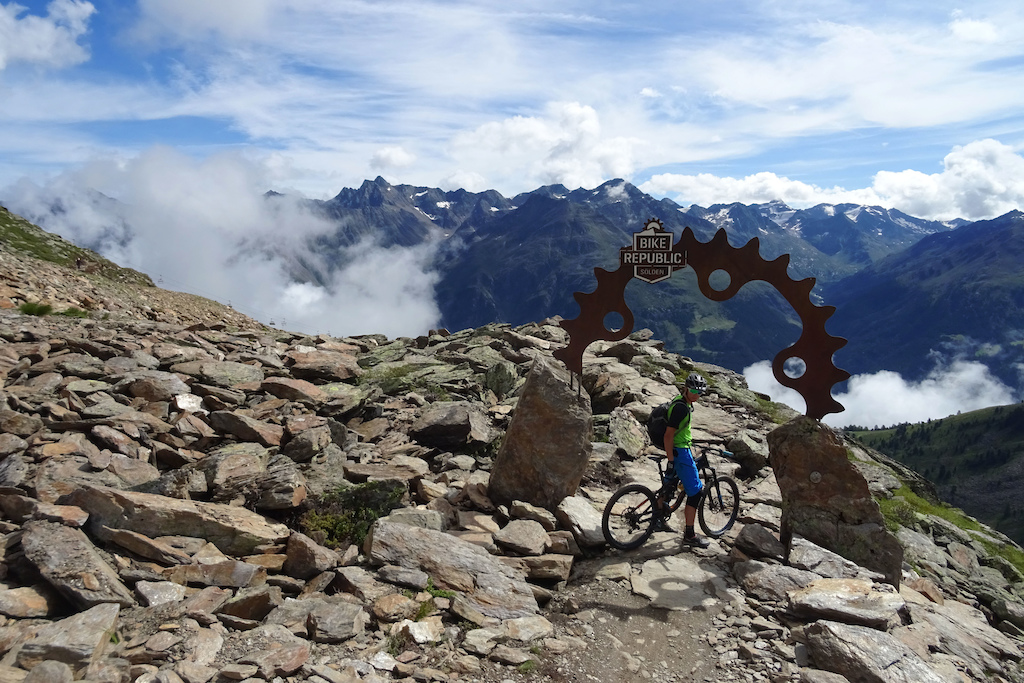 Bike Republik Sölden
Bike Republic Sölden is one of the fastest rising bike parks in Austria. They are investing a lot in biking tourism which is shown in the trailnet, infrastructure, bike-friendly apartments and people. But if you’re an advanced rider you’ll get bored in the Bike Republic, since almost all the trails are wide flow-ish tracks. There are some naturals accessible by the cable car, but just too few. It would be a shame to ride bike park more than 2 days, while you’re surrounded by this beautiful scenery.

After a good night’s sleep at altitude, it was time to get going early. We weren’t sure how long the tour would take us if the weather will hold up, will the snow be too soft to walk or would there even be new snow up higher. Therefore we took the car to Vent, a small village under the mighty Wildspitze, the second highest peak in Austria. There is a parking area next to the chairlift at a daily fee of 5€. 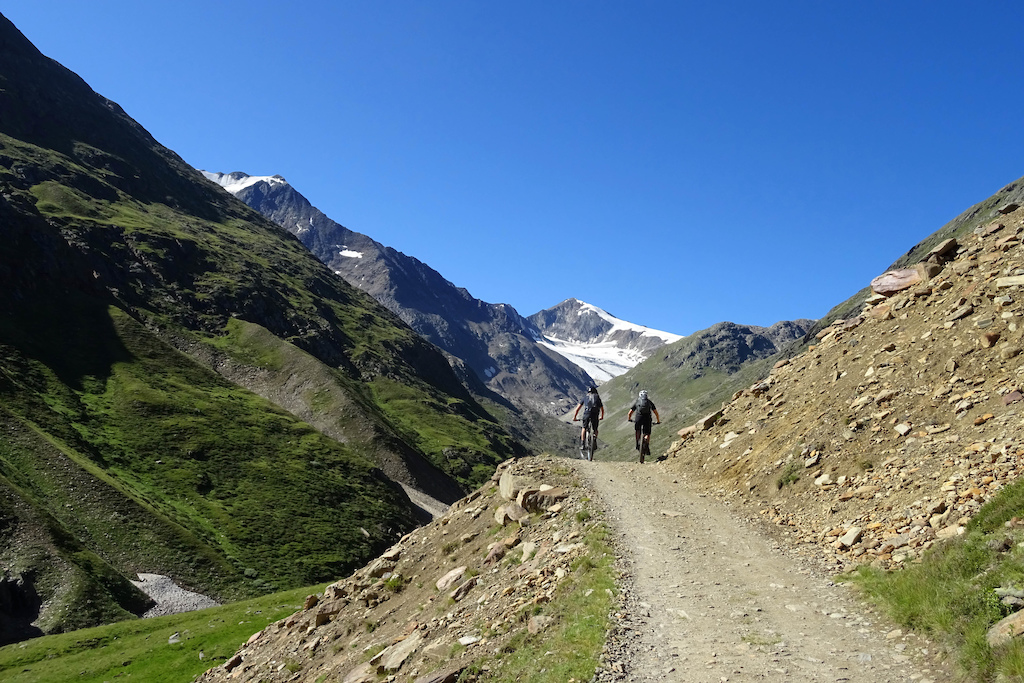 Glaciers everywhere you look
The route to Martin Busch Hutte is a wide double track and it’s pedalable. However, at the end of Vent just before you start ascending on a ski slope is a sign that doesn’t explicitly forbid mountain biking, but it says the road is not intended for mtb or e-bike. With that in mind and the loads of hikers going the same way, we continued with care. A small portion of the road is closed due to the danger of falling stones, but you can continue at your own risk. As this would not be the only risk we would be facing that day, we carried on the road instead of going on the detour. We weren’t only mountain bikers that day, Martin Busch Hutte seems to be a popular destination for bikers. 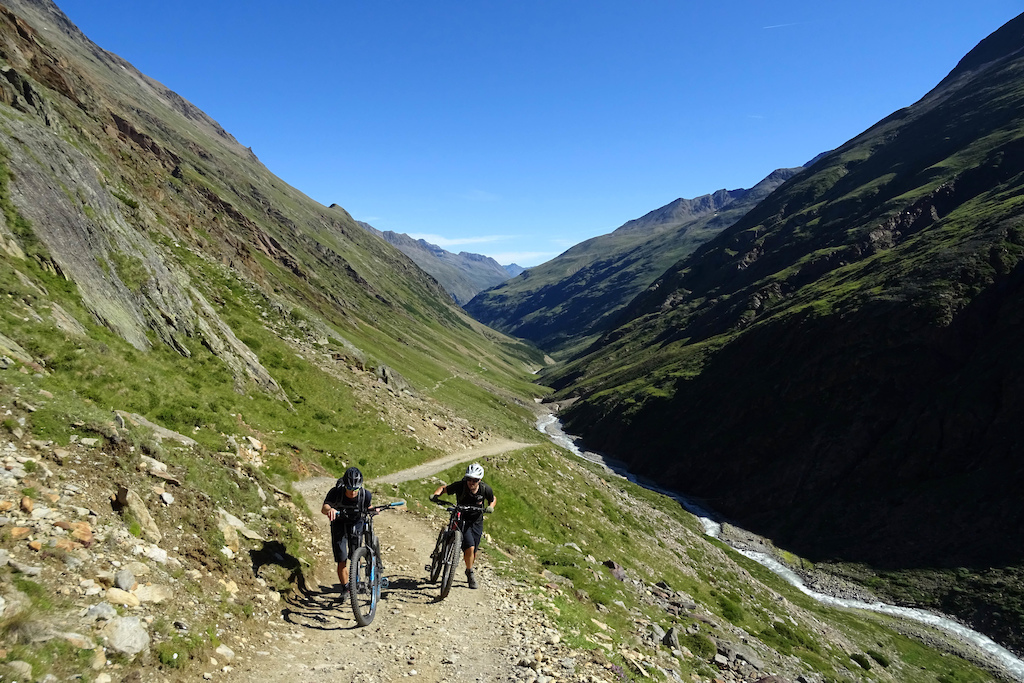 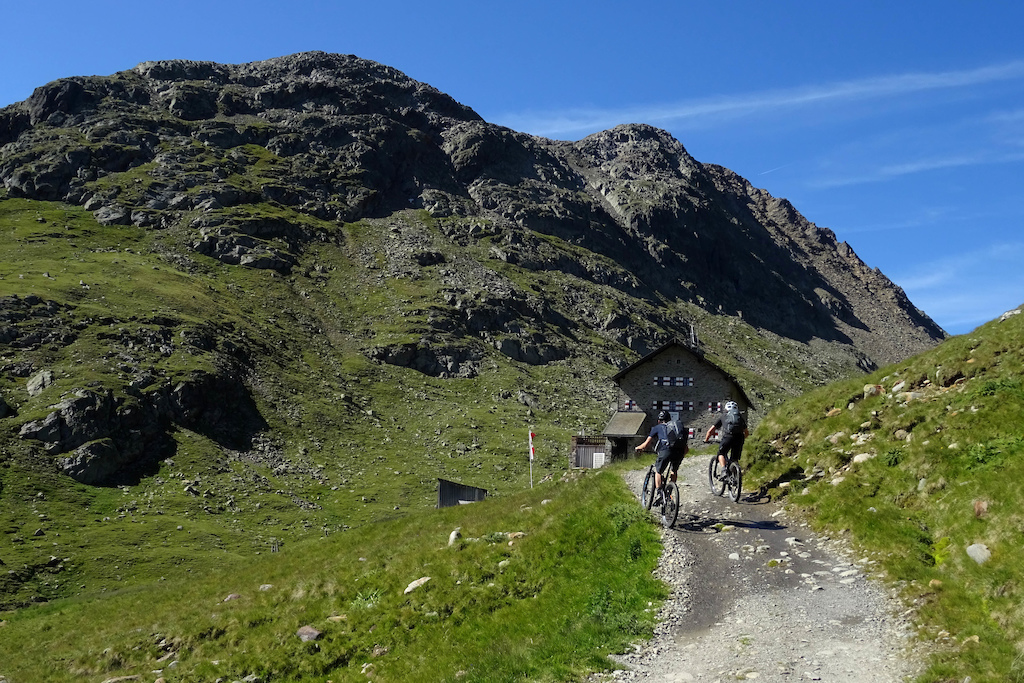 Double track up to Martin Busch Hutte
From the hut on Niedertal splits in two. The flatter valley continues south and gradually gains elevation. The good portion of it was still rideable and we were making progress ahead of schedule. It took us under 2 hours to get to Martin Busch Hutte which is at 2501 v.m. We still had 700 m of elevation to negotiate but things were looking good. 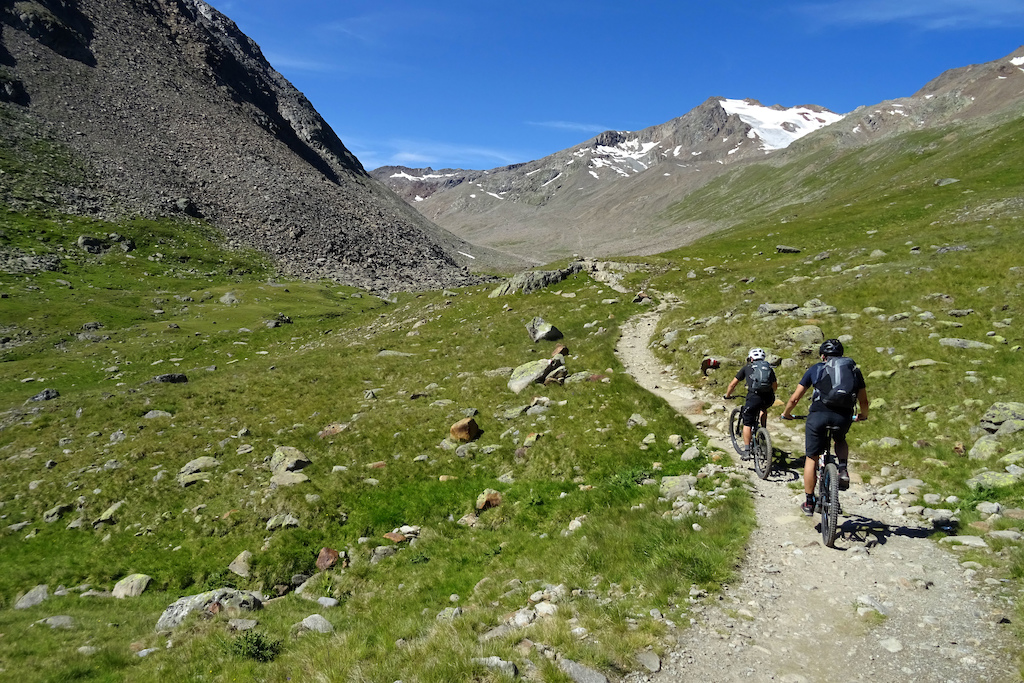 Beautiful valley
There are two options to get to Ötzi’s discovery site. One is to continue on the valley floor to Similaun Hutte in Italy and from there over the ridge to the monument or to swerve right early and make your altitude by traversing the slope avoiding the hut and coming directly at the top. We choose the second option mostly because it was more remote and not crowded at all since all the hikers went only to Similaun Hutte. 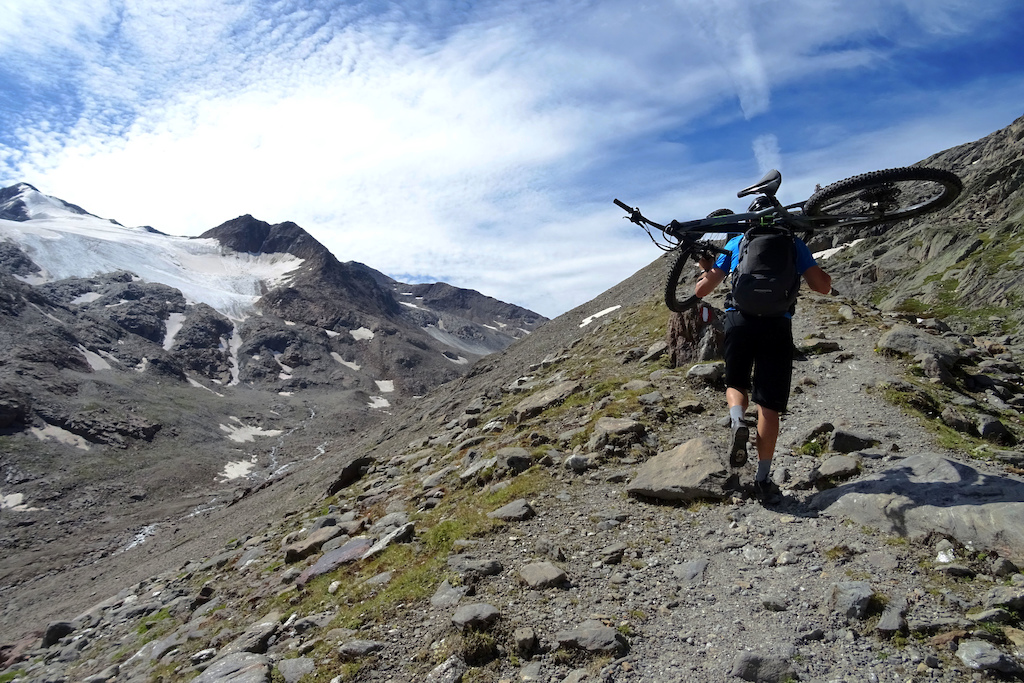 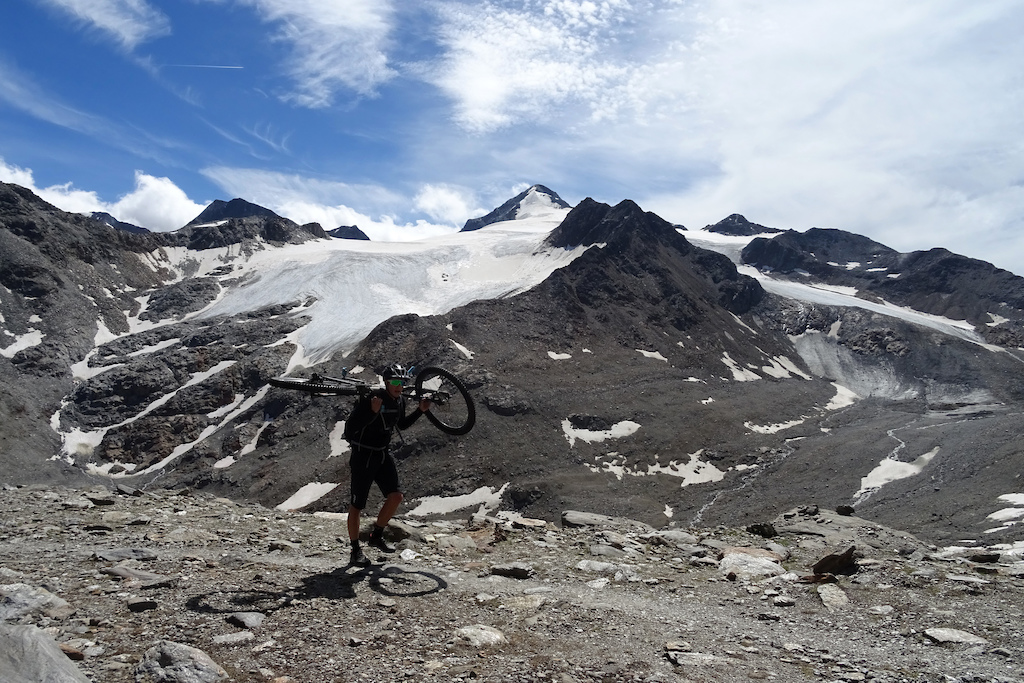 Feeling the altitude
As we were carrying 15 kg bikes on already heavy backpacks and sweating the most, we came across a local family of four, who were happy to meet us. The man told us a story how 17 years ago he went on the same journey with a mountain bike too. Crazy to believe that that many years ago he descended on the same trail we did with our modern bikes. It just shows the state of mind of true mountain lovers. I do believe mountains are for everybody as long as you stick to the mountain codex and you’re not doing any harm. Overall, no one we met had anything against mountain bikers! 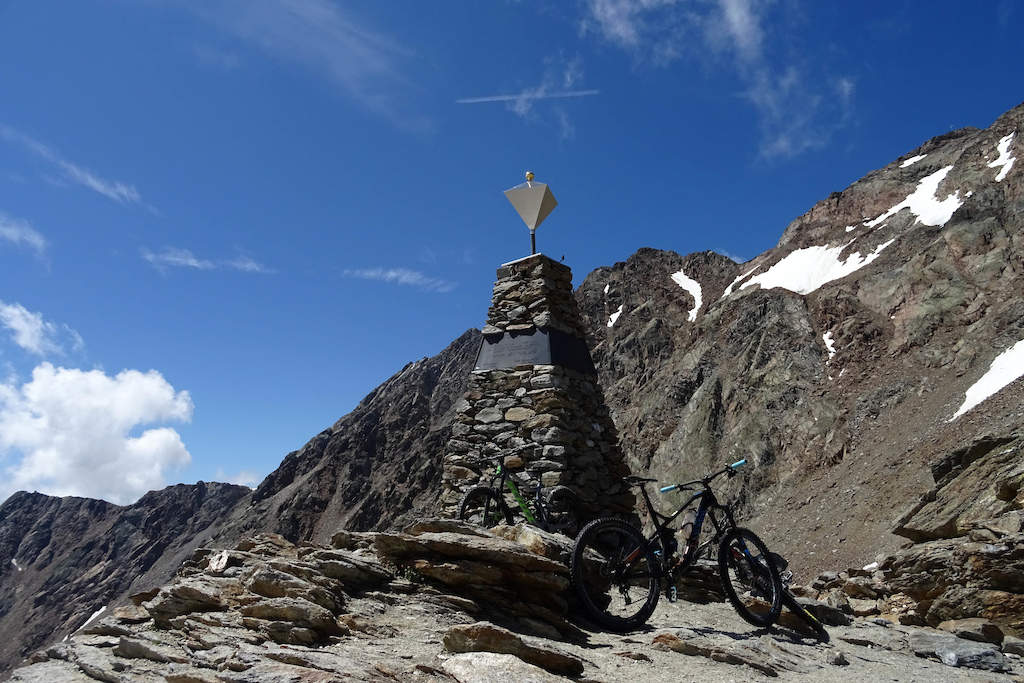 Ötzi’s Fundstelle – discovery site at 3210m
And then there he was. Or was he? The place of discovery is actually 70 meters further north-east according to the sign on the monument. So after 5 hours of pedaling, hiking and carrying the bike we were finally at the altitude of 3210 meters above sea level.

"In January 2017 I first reached 3000 + of elevation when we summited Ankogel in Hohe Tauern region. We did leave skies on Kleiner Ankogel, but that was still enough to make my first descend from above 3000 meters. I was searching for a suitable summit of 3k to ride it with my bike since. We came close in Livigno last year, but the problem was, I was looking for it the wrong way. I thought that the easiest way was to go low as possible, but as I soon found out, those peaks are often stacked and loaded with rock with no clear path. In Ötztal the mountains were much higher than anywhere I’ve been, which meant higher accessible paths." 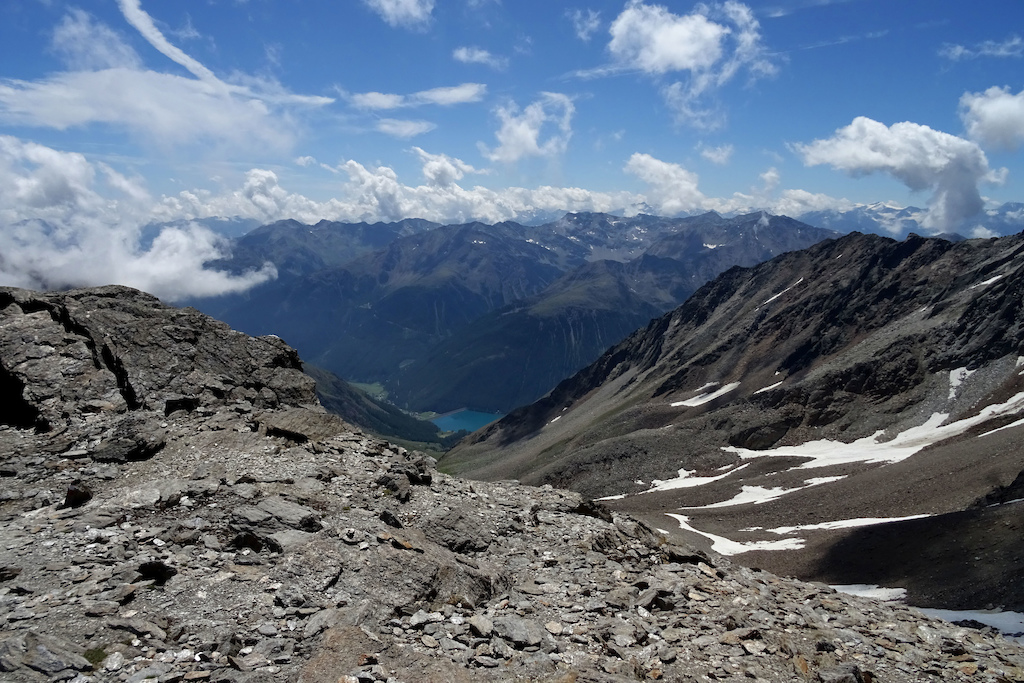 Lago di Vernago in Italy
The weather that day was marvellous compared to other days spent in the valley. We chilled at the top to properly enjoy the views, temperatures and sun. We knew that the descend would be quite difficult on some portions so we took our time and did it right. 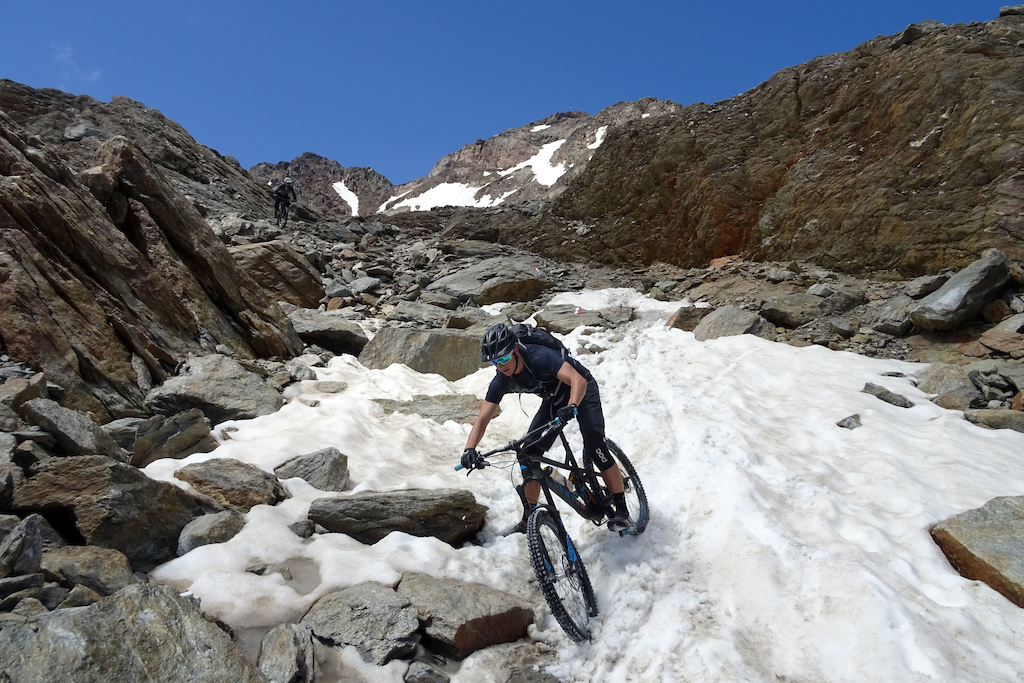 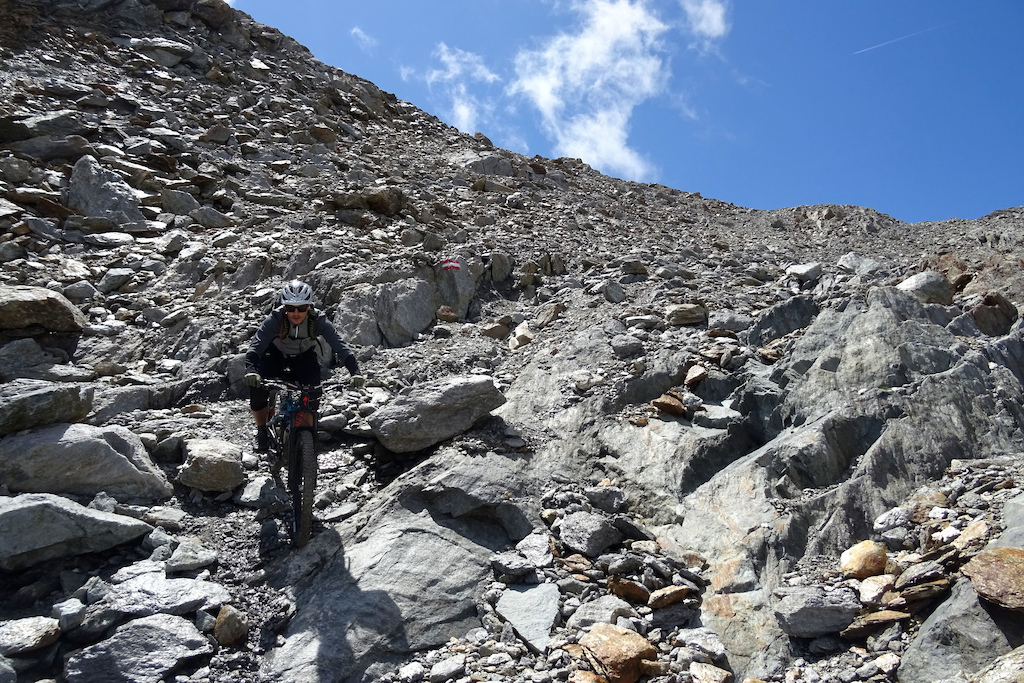 Proper big mountain riding
Crashing in the alpine would be a stupid mistake. The risk is just too big if you consider all the factors. There are parts I would call a no-crash zone, but honestly, mistakes tend to happen on the easiest parts more often. Luckily we came down unharmed, with only a few new blisters.

I would rate this descent S3 with some parts up to S5. Although it was late summer we still had to cross a few snow patches and carry it over some streams. This, however, is not the usual downhill mountain bikers take, I found out that most of the descent on the other side, down to Vernago. Our variation took us 6 and a half hours, we did 27 km and 1300 vertical meters of ascent. 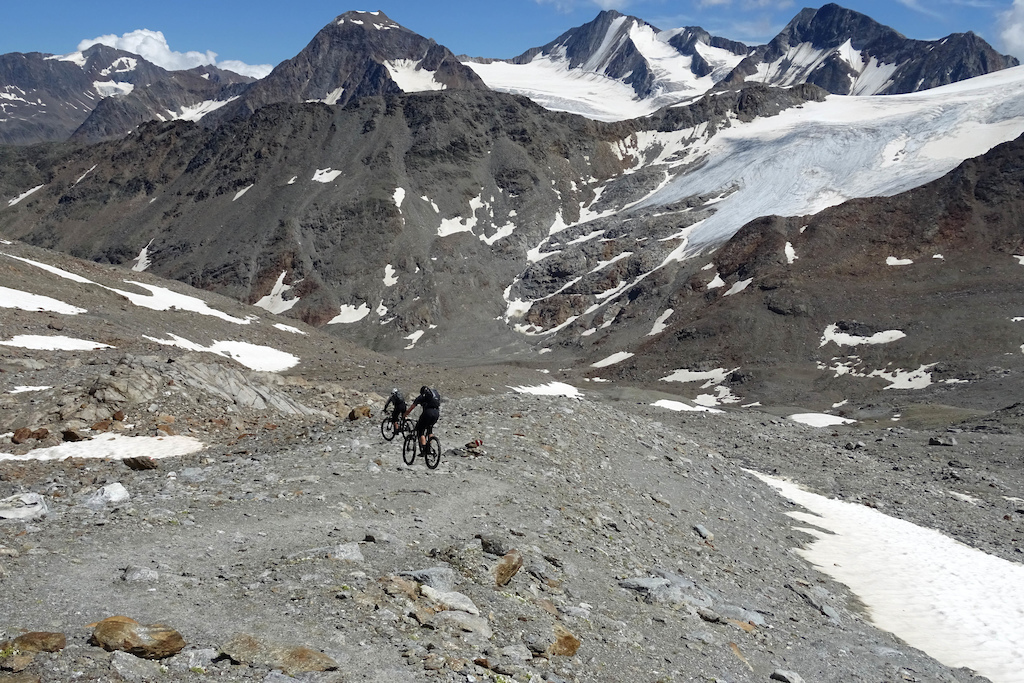 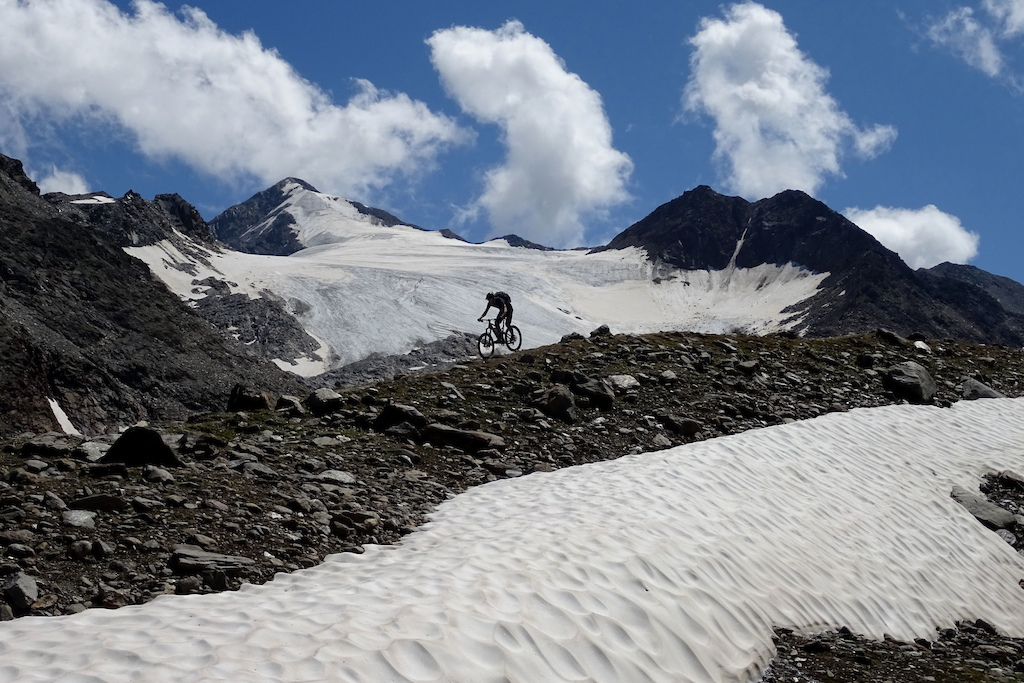 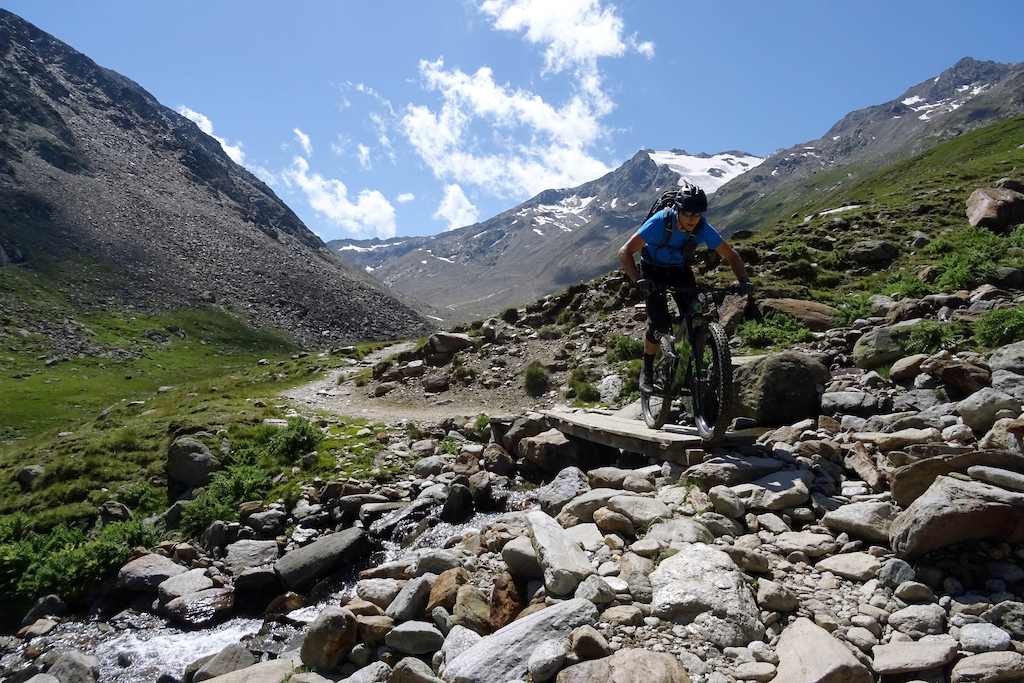 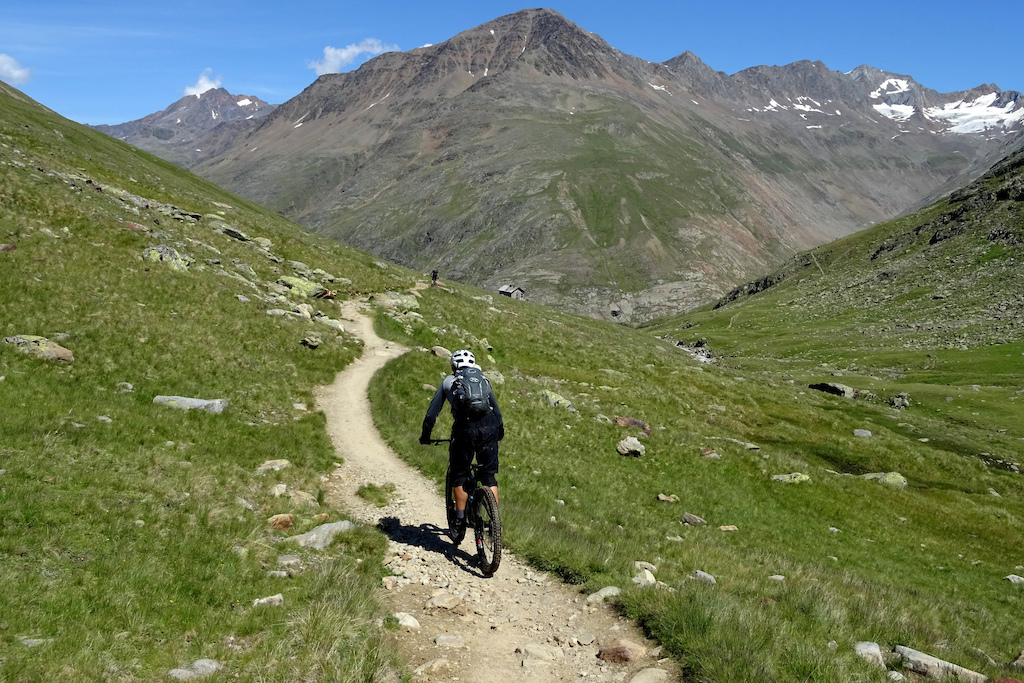 Hard to stay focused
At the end of the day, we didn’t find the mummy, but we found much more. We found solitude and companionship, we found glaciers and alpine flowers, we found new trails and places, we found life where was death!

Geochemistry (Jun 13, 2020 at 9:20)
Mountain bikes are for exploring! Thanks for the story. Less bike parks, more wild country. No shame for wagon trail double-track riding to get away from society.

tolemtb (Jun 14, 2020 at 15:54)
Like the story. Like the ending " At the end of the day, we didn’t find the mummy, but we found much more. We found solitude and companionship, we found glaciers and alpine flowers, we found new trails and places, we found life where was death! "Most of my rides are done without finding the mummy, but lots of them end with friends, beer, and a good story to tell.