Putting on the Charge - The Jack Moir Interview 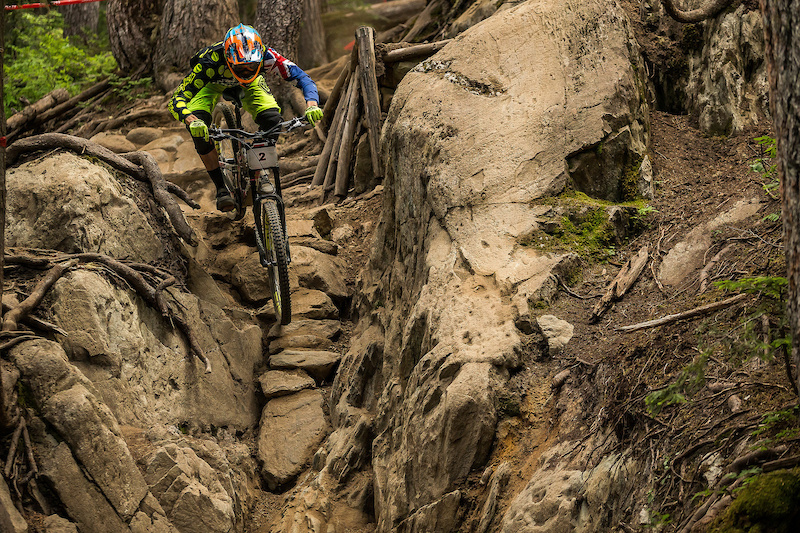 All style and skill in the Garbanzo DH earlier this year, where Moir came in third.

Already four medals deep across the Crankworx World Tour 2017, including one in Whistler so far this week in the suffer-fest that is the Garbanzo Downhill, Jack Moir is having a season for all-time. He's also on track to repeat his big overall Crankworx Downhill World Tour championship win. But one race remains. The race that earned him a silver medal last year, just one step below his fellow countryman Troy Brosnan.

We talked to Shark Attack Jack ahead of the iconic Canadian Open Downhill presented by iXS, the final downhill race of Crankworx Whistler 2017. 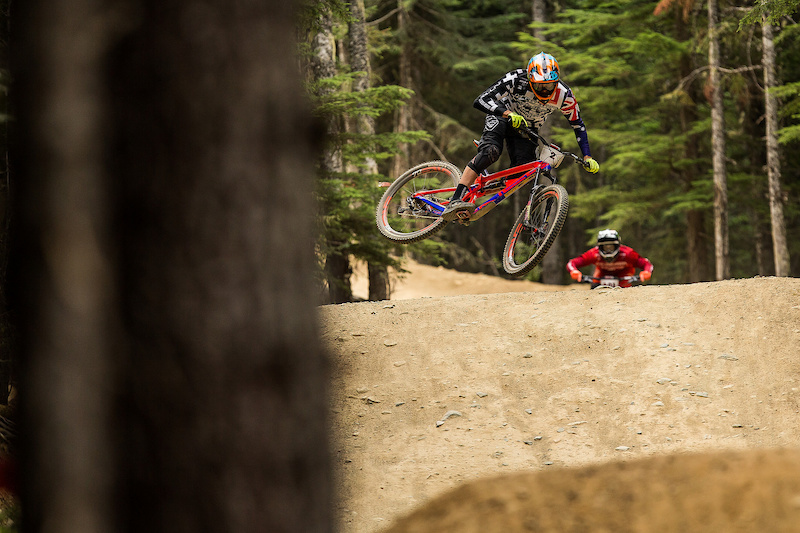 Solid season so far, with three Crankworx podiums, including two first places, plus three top 10’s in UCI, including a second place in Fort William and eighth in Mont-Sainte-Anne recently. How would you rate your performance this season?

I’m really stoked with how this season’s gone. Last season was kind of like a build up from my injury the season before. I got a few top 10’s toward the end but it was always my goal to be a consistent top 10 rider this year, so I’m pretty happy with how that’s been going. 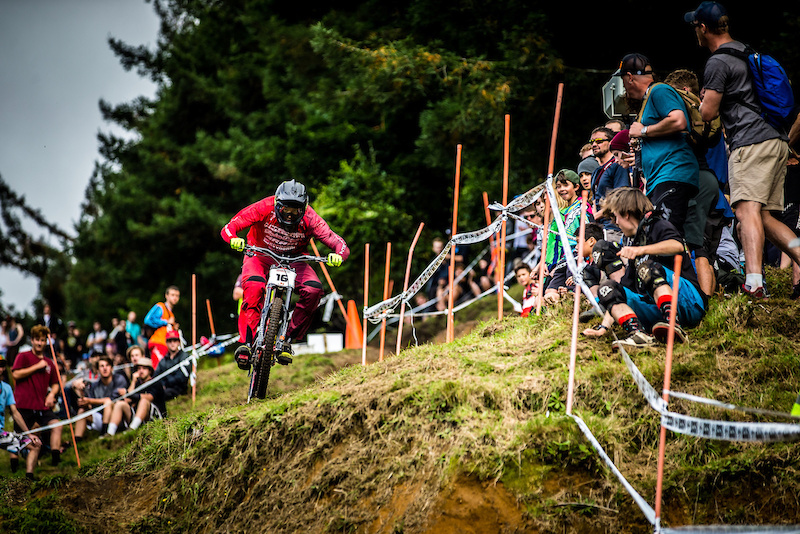 Starting off the season with a win at Crankworx Rotorua.

Going into Rotorua in March, lots of the riders were telling us this was a big race, as it was sort of the unofficial kick-off to the international racing season, with the likes of Brosnan, Bruni, Hannah, Jackson, and more, queuing up for the win. And you managed to come away with it. How did that feel?

That was a good feeling. It’s hard to know how fast you’re riding after a couple months of off-season where you’re not riding against any of the top guys, so to show up for the first race of the year and take the win up against them was a good feeling.

You also came in sixth in the Giant Toa Enduro in Rotorua, then 10th at the next Enduro World Series stop in Tasmania. Last year you raced in La Thuille and came in eighth. What are your thoughts on downhill vs enduro?

My priority is definitely downhill. I more do the enduro stuff for training. It’s real good training. I spend a lot of time on my enduro bike back home as well. I always thought I could maybe go pretty good at some enduros, but yeah, my focus is definitely on downhill.

Do you see somebody like Sam Hill, or Jared Graves, and see that these are riders that were very downhill focused and now 100% of their efforts are going into the EWS, and see that as a possible path for yourself down the road?

Yeah, maybe. They’ve both had successful careers in downhill and then kind of made the transition. I think maybe one day I could do that. We’ll see what happens. I enjoy both. Riding bikes and having fun. 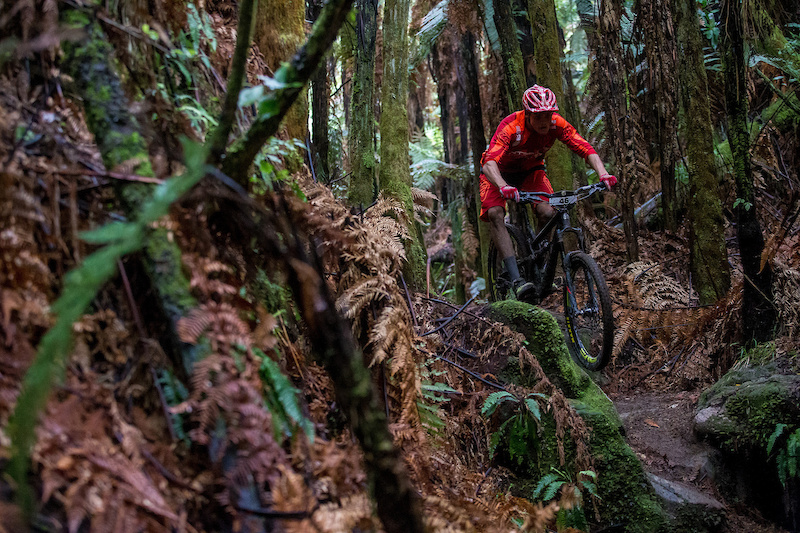 Getting amongst the jungles of Rotorua in the Giant Toa Enduro

Last year you came in second in the Canadian Open Downhill presented by iXS and third in the Garbanzo Downhill. What are your goals heading into Crankworx Whistler this year?

Yeah, I’d like to be on the podium again for all the downhill rounds again, but we’ll see what happens. There are a lot of good guys here.

What would you do with that extra $25k from King of Crankworx? Plus the additional paycheque for the DH World Champion title…

Big payday. I haven’t really thought about that though. I’d start thinking about that once I won it.

With that being so within reach, does it make you look to any other disciplines? Would we ever see you on track at something like a DS&S or pump track?

I was thinking about maybe doing pump track and dual, but I think the three downhill races is enough. I don’t want to wear myself out. I’ve got the last round of the World Cup coming up and World Champs back at home, so I just don't want to do too much and wear myself out. Especially with races like Garbo. I was thinking about doing the EWS as well, but it’s just too much. I would just destroy myself. 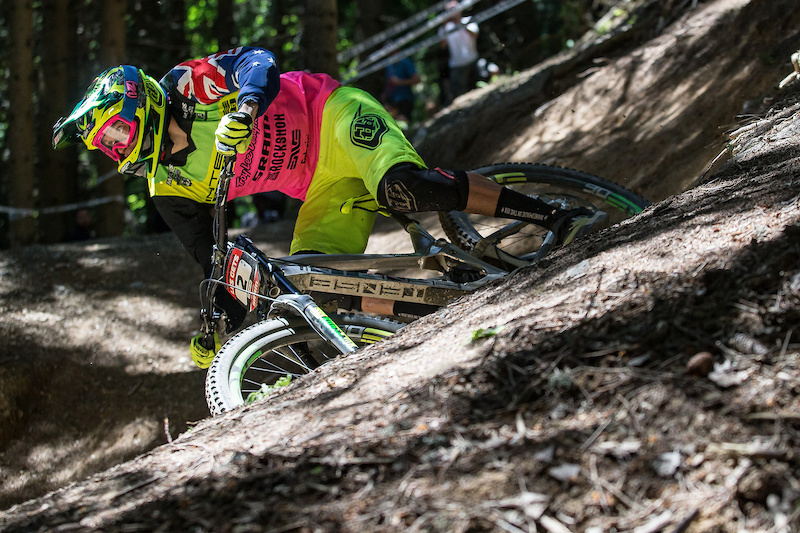 Going for Air DH Gold in Les Gets.

Then there’s the Crankworx Downhill World Champion title, which you won last year and, heading into Crankworx Whistler, you’re currently in the lead for, though only 20 points ahead of Mick Hannah. What would it mean to you to win that two years in a row?

I definitely would like to do that again. I went to every round this year. Last year I actually missed a round so I don’t know how that happened. But that’s been my goal to defend that title this year, so I’ve been to every round and had a couple podiums. So hopefully I can get on the podium here and take the win. 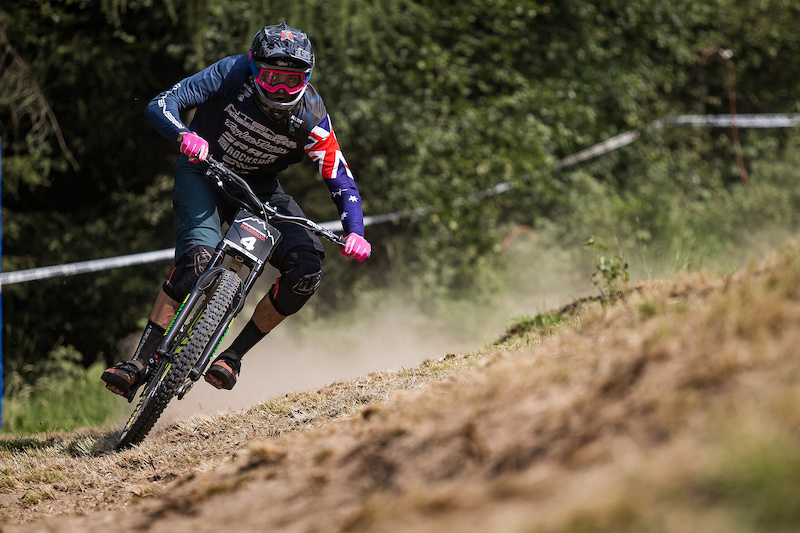 It’s been interesting this year to have riders like Greg Minnaar racing in Les Gets, and Danny Hart in Innsbruck. Obviously it has a lot to do with scheduling and other priorities, but it’s cool to get those top riders that we maybe don’t see quite as much and throw them into the mix and see how the riders stack up on those tracks.

Yeah, those guys maybe do one or two. I did two World Cups, then two Crankworx, then the two World Cups, and man, it was a tough six weeks. I was drained by the end, so I can understand why some guys don't do all of them.

How do you manage to stay balanced between World Cups, Crankworx, throwing some enduros into the mix. We’ve got other riders like Keegan Wright doing the same, with these really aggressive schedules trying to do everything. How do you stay rested?

It’s hard. I don’t know. The six weeks wore me out a fair bit, but I went home before coming here, so I had a good couple weeks break. I think you just have to kind of cruise, really chill out in the weeks between the races and not do too much. Otherwise you just quickly get worn out and you’ve got to try and stay hungry and want to win every weekend.

I was talking to Jared Graves before and he was saying “...we’re having a pretty chill time, just doing some 3-4 hour trail rides every day.” And we were laughing saying that to your average person, that’s not necessarily a chill day off. So for you, when you say you try to relax in between, what does that actually look like?

Yeah, I’d say Graves’ relaxing and my relaxing are totally different. But nah, like, in between the six downhill races in a row we would just go for cruisey trail rides maybe Monday and Tuesday and some light gym sessions. When you ride downhill every weekend, just give that a rest during the week and do some light maintenance work.

What’s your favourite Crankworx track of the year been?

I equally like Rotorua, Innsbruck and Les Gets. They’re all some of the best tracks we’ve ridden.

What hurt more, getting bitten by a shark and getting 500 stitches or recovering from your collarbone injury in 2015?

It was actually 110 stitches on the outside, and over 500 on the inside. It was pretty rough. But the collarbone one was way worse for me. When I got bitten by the shark I was just a kid. Went straight to hospital, got fixed up, chilled out and got some time off school and started surfing again. But the collarbone one, it just kept coming back for a whole year, and I missed out on a full season on my first year as a Pro. So that was way harder for me to deal with. 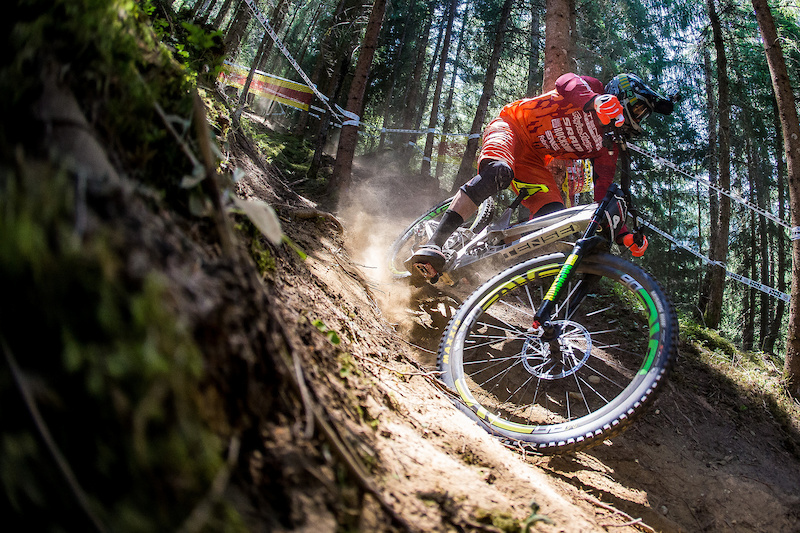 One of the things we talked about, both with Martin Soderstrom and Jared Graves, is how as a Pro athlete you have to really grow mentally and emotionally to really get through injuries. Because it’s going to happen. You’re going get mechanicals at crunch time. You’re going to get injuries that are going to set you back. Do you think that your collarbone issues really strengthened you in that other sense with your mental game?

For sure. That stuff I think it just makes you more hungry. If you can get through it, I think you’re going to be stronger on the other end. Even just little things, you learn, like lately I got sick and I just kept training and just put myself in a hole for like a month. You’ve just got to say, well, I’ve got to rest. You learn these things along the way.

Whether you’re a Pro or you’re someone who just loves to ride, it’s hard to stop.

Yeah, you just feel like you’re being lazy if you stop.

At 23, you’re crushing it in a lot of respects - what kind of goals do you have for yourself as we look forward?

I just want to keep racing bikes, training hard and having fun, and wherever that takes me will be great.

Watch Jack make a final charge for the Crankworx downhill title in the Canadian Open DH presented by iXS on crankworx.com, or right here on Pinkbike:

IllestT (Aug 19, 2017 at 4:08)
Jack is great to watch! Sick rider The questions in this interview were a bit weak though

Intense bikes were impressively dialed that weekend: no sound except the tires.