Join Pinkbike  Login
I'm going to keep it short, because, well the short of it is, Brandon won and our crew is looking to celebrate with a big dinner and maybe some bevies tonight. Today we pinned it up to the course with a crew of 5 guys who rushed to finish Brandon's line. It wasn't the gnarliest line on the hill, but it carried Brandon to victory.

Check out today's pics, Brandon's winning run on video and a play by play of everyone's runs from the finals inside. 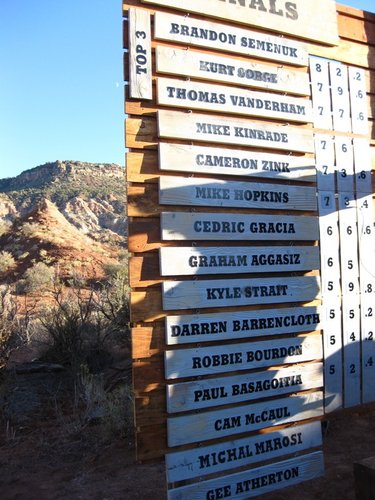 Standings at the end of the day

Recap of the runs from finals:

Brandon Semenuk: rode his line clean all the way down first run but over rotated his 3 at the bottom. Second run was identical except he nailed the 3 at the bottom. Some no handers, no foot cans, a 360 drop and some super technical lines. Fast and flowy. 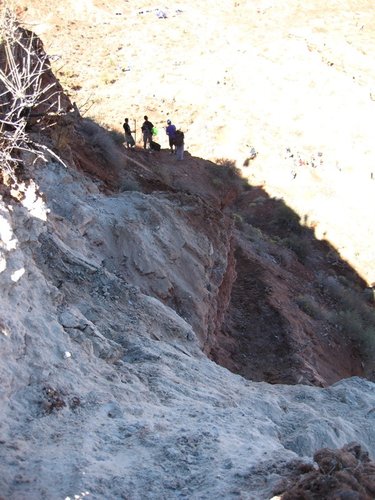 Entrance to Brandon's gnar line in the finals

Brandon's Winning Run!
Kurt Sorge: Rode one of the gnarliest lines up top. Which included a big step down in a very exposed section. Ended up being the first person to moto whip the big 60 foot gap. Second run went the same until he tried to super can the 60 footer. Kurt didn't get his feet back on the pedals, but it was still one of the sickest things all weekend. 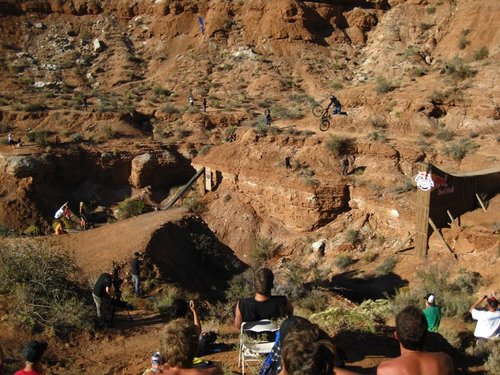 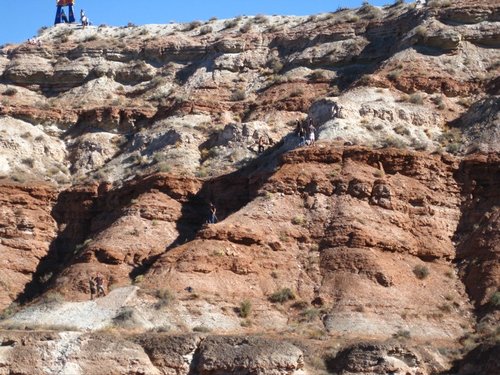 Thomas Vanderham: Thomas is the king of big mountain (IMO) and this just proves it, nobody rode as smooth and as flowy as Thomas. He hit the technical lines up top, then launched the huge gap super big. Second run was the same until he threw a suicide no hander over the gap. The run went wrong when the sun cast a big shadow across one of the lips in the lower half causing Thomas to crash. A run that could have topped Brandon. 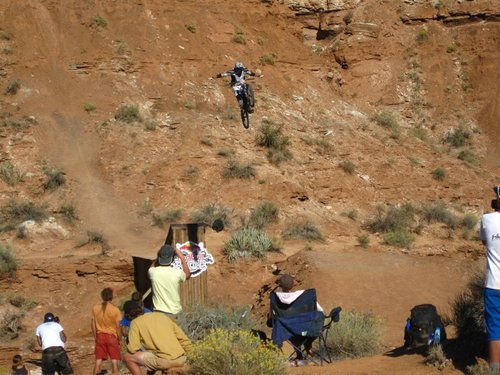 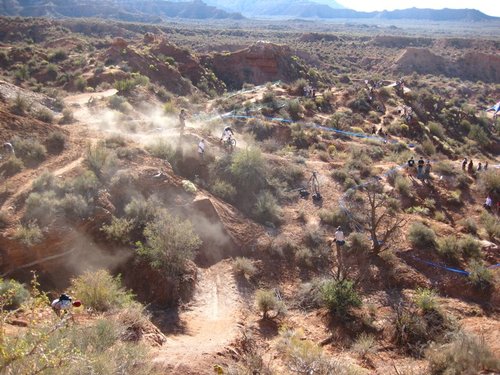 Mike Kinrade: Kinrade killed it, Mike rode Gee Atherton's line perfect, not as fast as Gee but just as smooth. 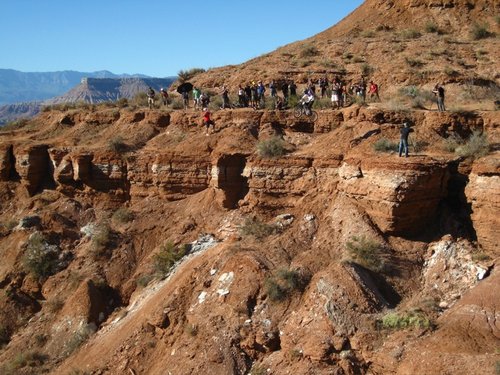 Cam Zink: Cam also hit a portion of Gee Atherton's line, but then headed over towards a step down him and Strait had carved out. Zink 3'd the drop perfectly. His first run took him out on the three drop. 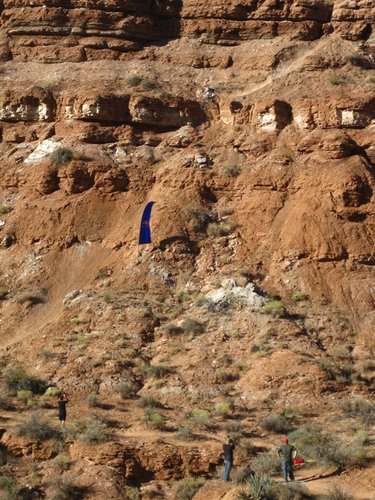 Mike Hopkins: The Canadian freeski champion competed hard all week, Mike rode the canyon gap, almost went down, but rode it out. Mike then carved into the step down and hit a hip drop step down that no one else had hit.

Cedric Gracia: Gracia rode like a racer all day. Super smooth and fast at all times. Big x-ups off the drops and no handers over the speed jumps in his line. 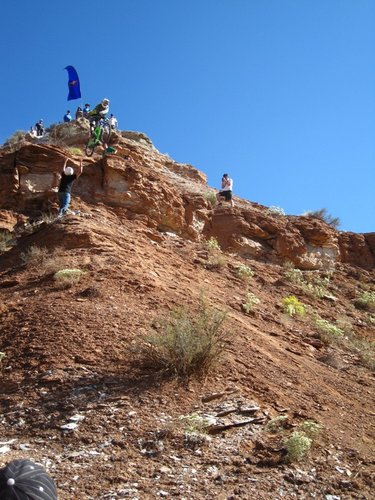 Kyle Strait: Kyle hit up Rachel Atherton's line high up, airing right over the dish that everyone was riding down. In his second run he tried to 3 the lower drop but went way too big and ate it in the loose Utah soil. 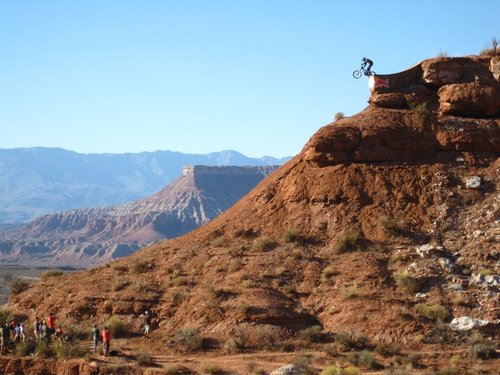 Big gap beside the dish that everyone else was riding

Darren Berrecloth: The claw rode a super steep technical line down a gully. No one else rode anywhere near where he rode, and his line was super unique with some wallrides, a huge drop, and a super technical step down hip that he had to hop into. His first run he fell super high up and his run was over from there. On his second run he made it almost to the bottom but overshot a step down and crashed. Tough luck for the Claw and one of the coolest lines all weekend. 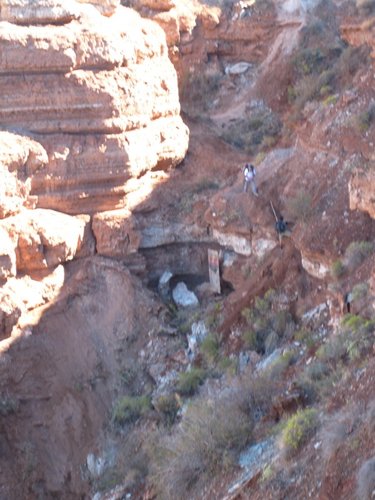 Where only Bear's ride

Graham Agassiz: Graham rode super solid all weekend. He told me how he hardly had a line ready, but what he ended up riding was super rad. He rode the top of the far left ridge (rider's right) and then dropped down into his own line, that had a super gnarly landing with a huge step in it. So imagine a landing with like a 3 foot drop half way down that he had to push straight through. He took it real hard in his first run in, no foot can on the scooper up top as well. Rowdy riding from Aggy. 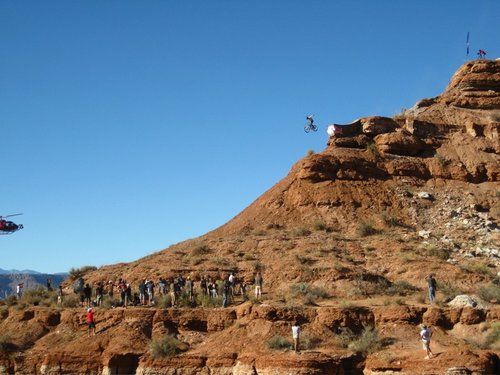 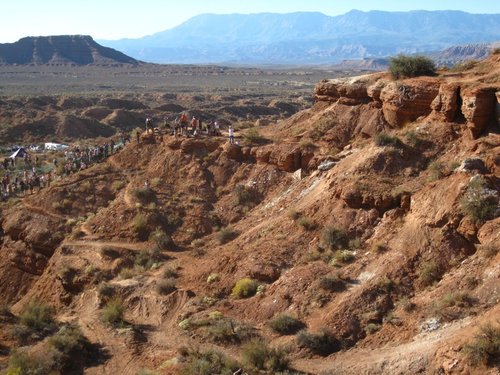 Gee Atherton: gets the award for bad luck, 5 minutes before runs were supposed to start the World champ went down on the slowest part of his line. He separated his shoulder. Dan Atherton was already sitting out. So both Athertons did not start in the finals. 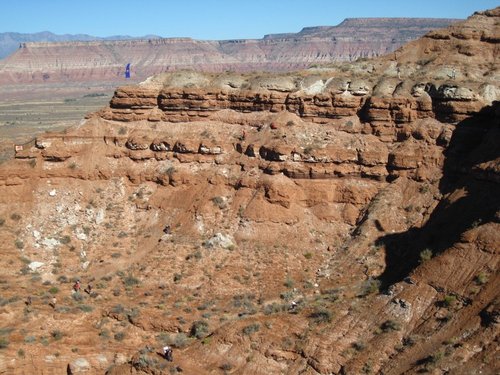 Cam McCaul: had mechanical trouble with his bike had only hit the canyon gap twice and had cased it both times, sent a no hander pretty much completely blind in his run. He then went down super hard on the next stunt, a step down he hadn't even ridden. Ballsy riding from an awesome rider. 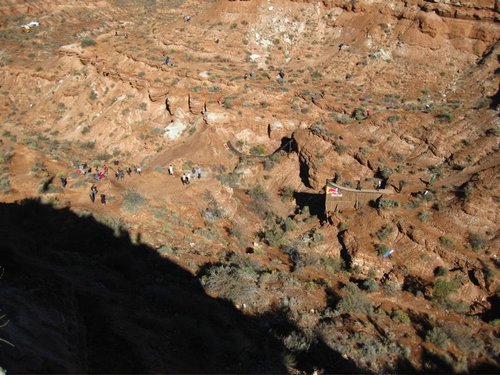 Robbie Bourdon: Bourdo hit some huge drops in his triple drop run. Not super technical, but was super impressive. Also went down in the lower half of his run. Bad luck for Robbie.

The first Red Bull Rampage in 4 years has come to a close. I never was able to experience those in previous years, but I was blown away by how awesome this contest was. It was easily more exciting then any slopestyle (and I really enjoy slopestyle contests) and it was totally different than a DH race. It really was a big mountain contest. The event was run very professionally, and the overall buzz has been positive. Hopefully this is the rebirth of these contests. I was glad to be able to be a part of one of my good buddies taking the win. Knowing that I helped him get there is such a rad feeling. Hopefully in 2009 I'll be healthy and get my own chance to ride. Either way I'll be back to watch again.

To see some ridiculous video coverage from the weekend, please check out http://redbullrampage.com/videos/ as they had the Freeride-Entertainment crew on hand and in the choppers getting us all the goods.

Also I know that you've all enjoyed my pics from the past 5 days, but should should take a few minutes out of your day to check out all the pro's shots over at http://redbullrampage.com/photos/. These guys were suffering in the heat too and they killed it from behind the lens. 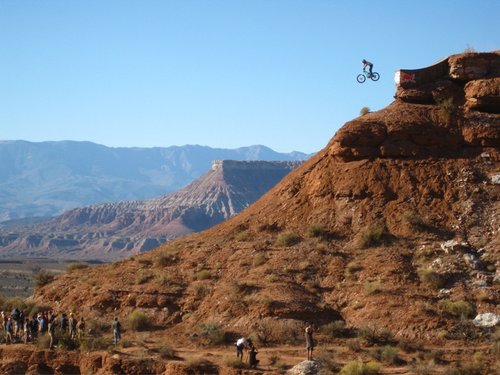 tomo12377 (Oct 7, 2008 at 15:46)
Gonna get neg propped through the floor for this, but no way should Brandon Semenuk have won, his run was to safe not in the spirit of the rampage if you ask me. Sorge or Vanderham should have been on the top step in my opinion

sicklikeasinrad (Oct 6, 2008 at 21:59)
A bummer for Matty Hunter as well, that kid has so much soul though, its like he doesnt even belong in contest. He rides for fun. thats what its all about.

tomszekely (Oct 7, 2008 at 6:00)
I like Gee, but I think, he's a really good DH racer, not a pretty stylish freerider. Anyway this is the sickest bike competition in the world! Thanks Red Bull! Congrats for the racers!!!!

Strippy (Oct 8, 2008 at 4:26)
people wonder why we were put on this planet. i say stop wasting time that you could be riding with,os the answer is between your handlebars. props to the rampage crew for a sick comp!

methdog (Apr 2, 2009 at 7:20)
Does anyone know how Gee's shoulder is doing? Dislocations can be alot worse than breaks longterm. Mine is still pooed after 2.5 years. Shame about Cam aswell, but that run where he stacked was skeeeetchy!!!

jamieledson Plus (Oct 7, 2008 at 12:20)
rampage was sick, didnt expect mike kinrade to do so well. sucks bout mccaul, gee, matt hunter and romo though.