Behind the Lens - Thomas Gaffney

Join Pinkbike  Login
Over the past 7 months I have had the privilege to get to know and work with Thomas Gaffney on a lot of various articles for Pinkbike. In the short time that I have gotten to know Tom, his work has gone from pretty good to just amazing! 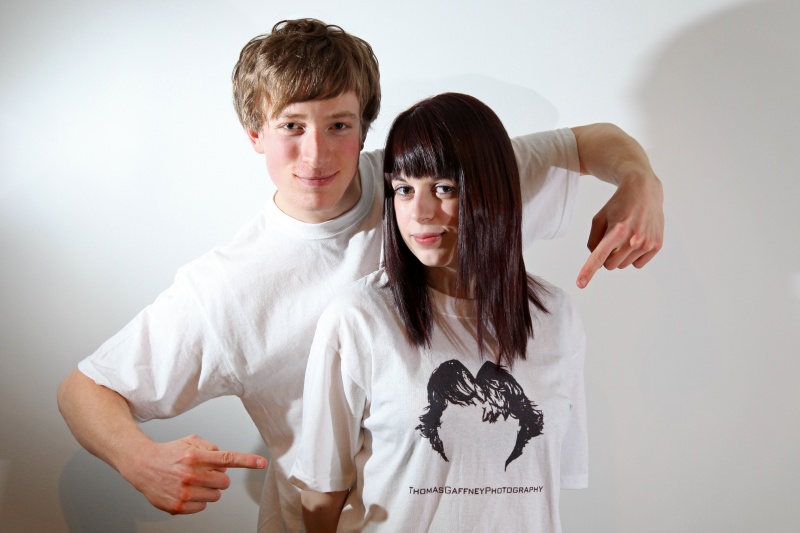 Hey Tom - Can you tell us a little bit about yourself?
My name is Thomas Gaffney, I'm 20 years old and a photographer currently living in Staffordshire.

When did you start getting into photography and how did your passion begin behind the lens?
I kind of fell into photography about 2 years ago after going to college to study Art & Design and after this it was photography all the way! I have always liked creating images and hopefully doing this will become my work. 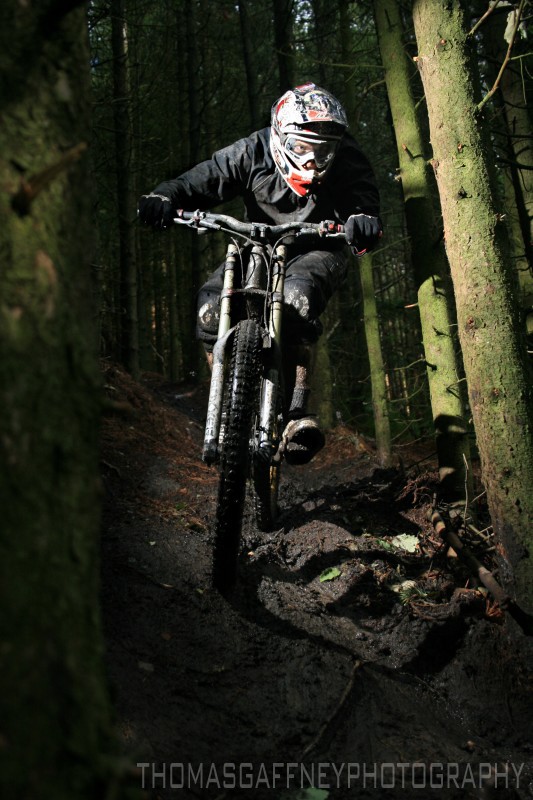 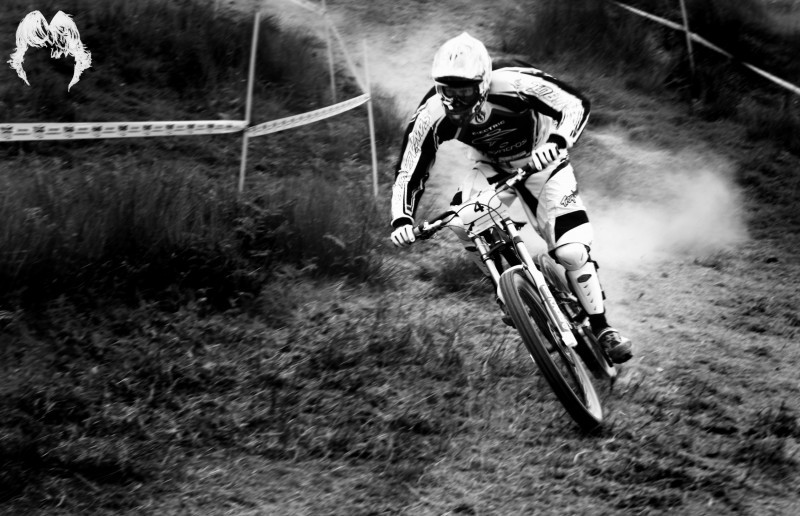 One of Tom first shots
You did your first pro shoot this year with Sam Pilgrim, Blake Samson and Sam Reynolds - what was that like?
It was completely epic, to be very honest I was nervous as I have only ever covered downhill racing before. This was a great challenge though and after hating my first hour and a half’s work it slowly started to pull together and I even ended up with a published image in MBUK, which was a great experience. 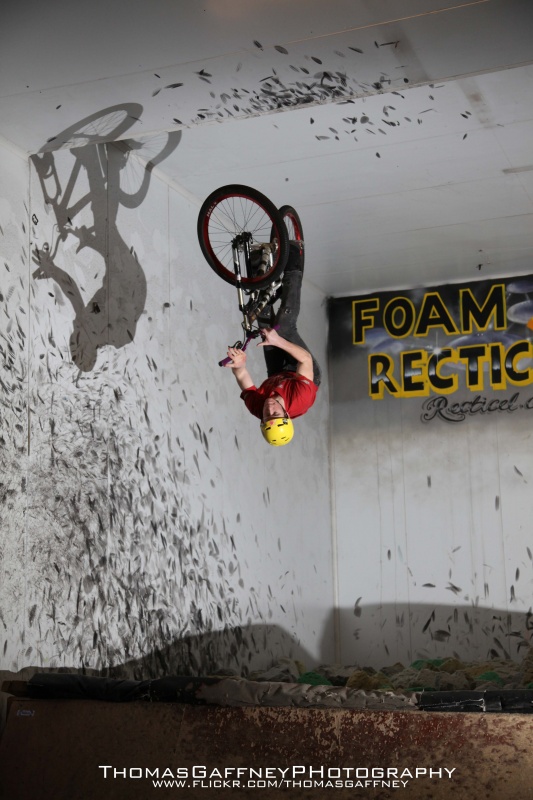 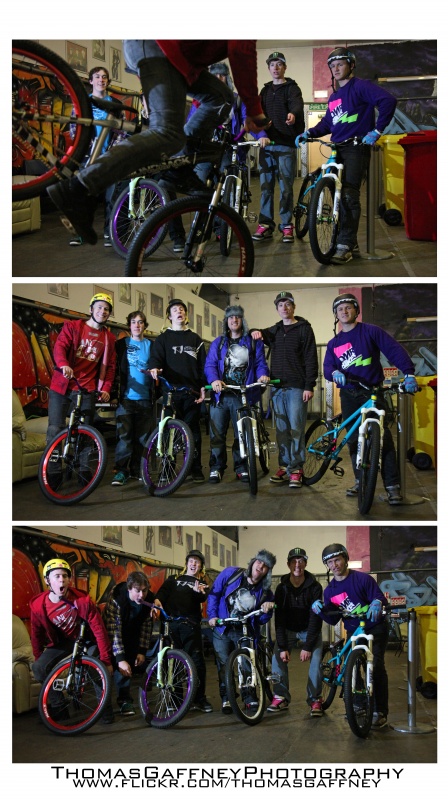 Having fun with the people involved!
With yourself being a downhill rider do you find other cycling boring to photograph?
Not at all, at first I was only into downhill, but my horizons are broader now! I enjoy every aspect of the sport now even if I’m useless at actually doing it, just gives you more respect for the people absolutely killing it in their discipline. 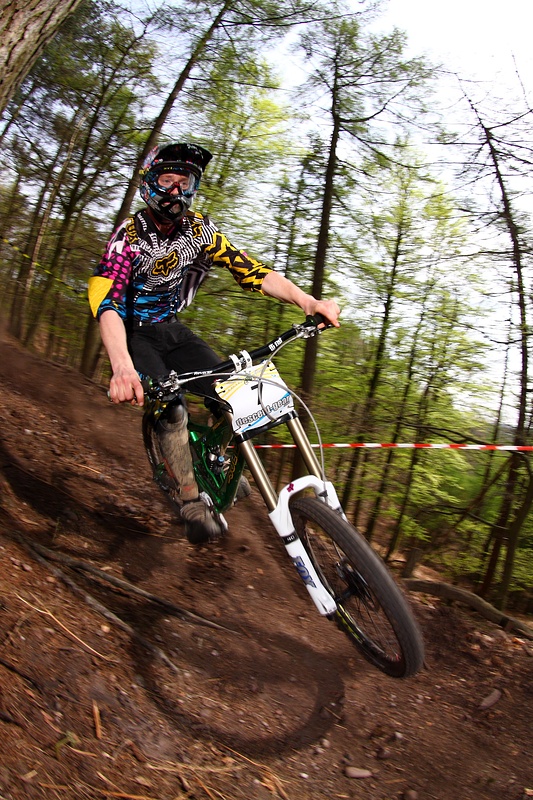 Tom loves to ride too!
What camera setup are you currently using?
From January I have been using my Canon 5Dmk2, hands down the best money I have ever spent! Before that I had a 400D for about 2 years. The flashes I use are all borrowed and my syncs for the flashes where all about £20 off Ebay! But if it ain't broke don't fix it! Also got two borrowed tripods which are slowly falling apart. 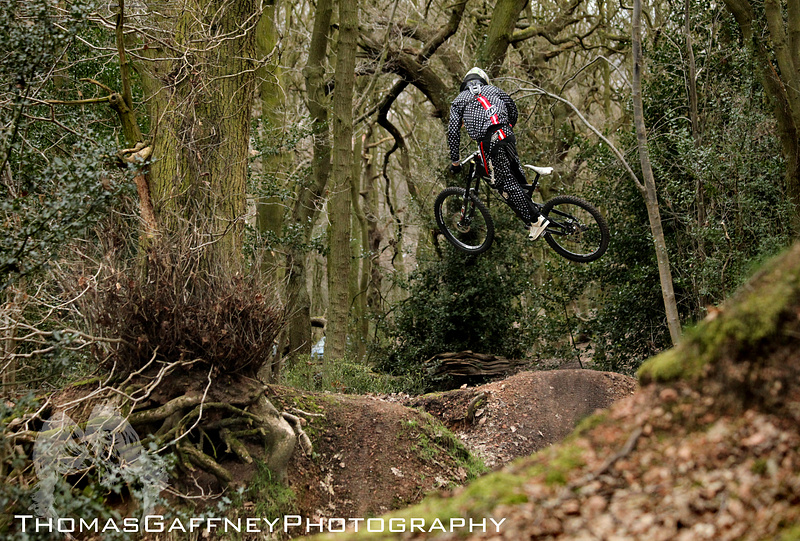 We know you love to shred as well as photograph - describe your dream ride and dream photo shoot?
Canada. It's my biggest dream to go there, I think it would be for anyone, just the trees and how everything is sculpted is so supreme. Another dream is to train as a bike coach so I can go and work over there in the summers and hone my photography in the spare time. Who to photograph there though would be a tough choice, just someone with bags of style such as Vanderham, Gracia, Hill, Fairclough and Steve Romaniuk got me into riding, so no doubt him as well. 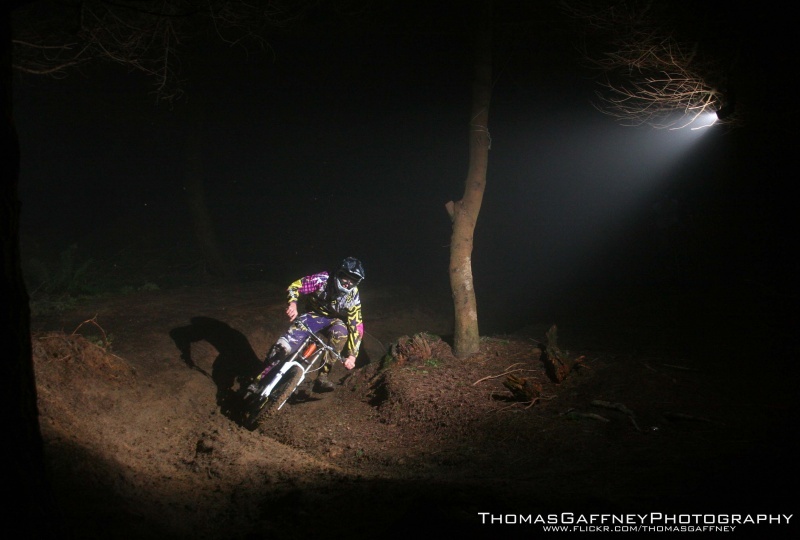 Which Photographers inspire you most and why?
I have always looked at Sterling Lorence's work and loved it. Just beautiful settings and he uses natural light really well too. One year for my birthday my partner did a drawing of one of his images and it was amazing. 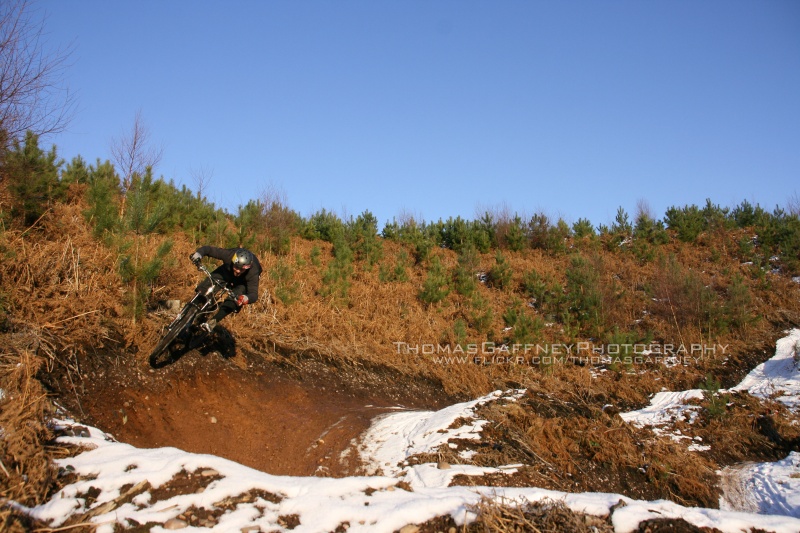 What do you prefer to shoot more than anything else?
Downhill. Simply, I just love trying to find angles other photographers aren't, love watching people at such high speed and it's the most scary one to watch. It's not until you get off the bike and watch that you think, "am I really going that fast?"! 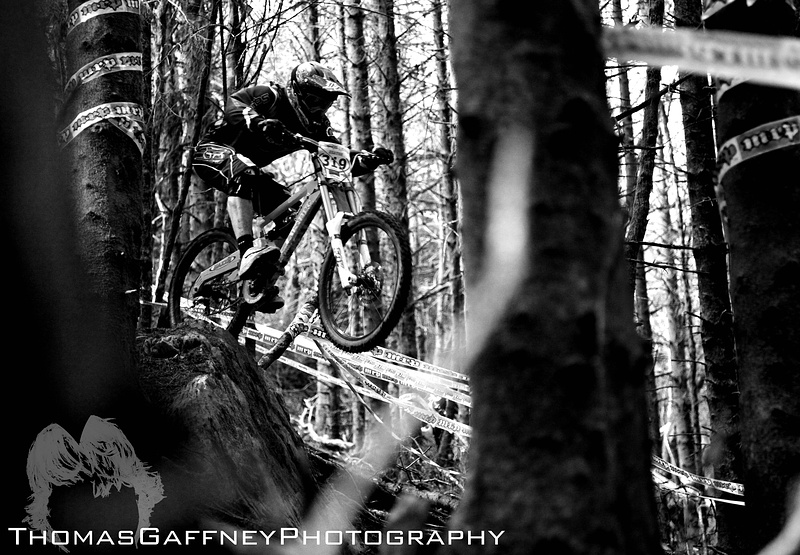 What's the most challenging factor to overcome in UK photography?
Exposure! Pricing and exposure. If it wasn't for John Lee I would probably have stayed in the shadows forever, but with this help I have got onto the front page numerous amounts of times and got my first POD and everything, so thanks for that. It's still really hard trying to get in with the big companies, just got to keep plugging. 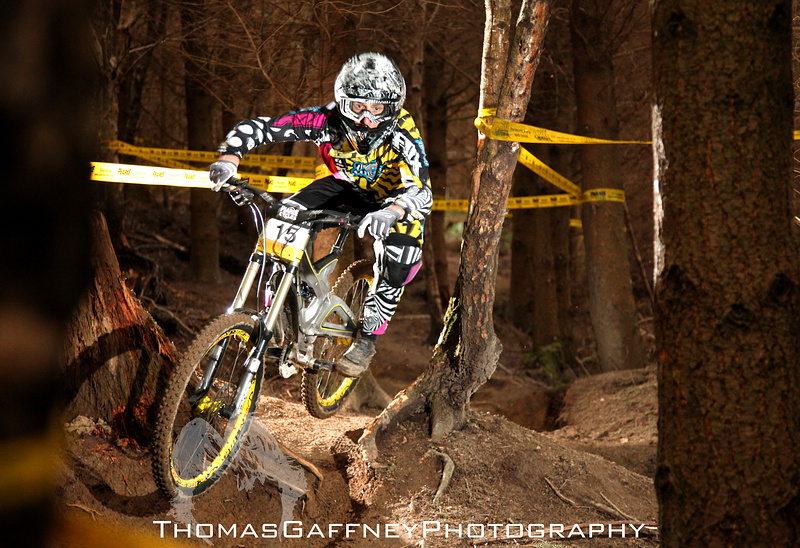 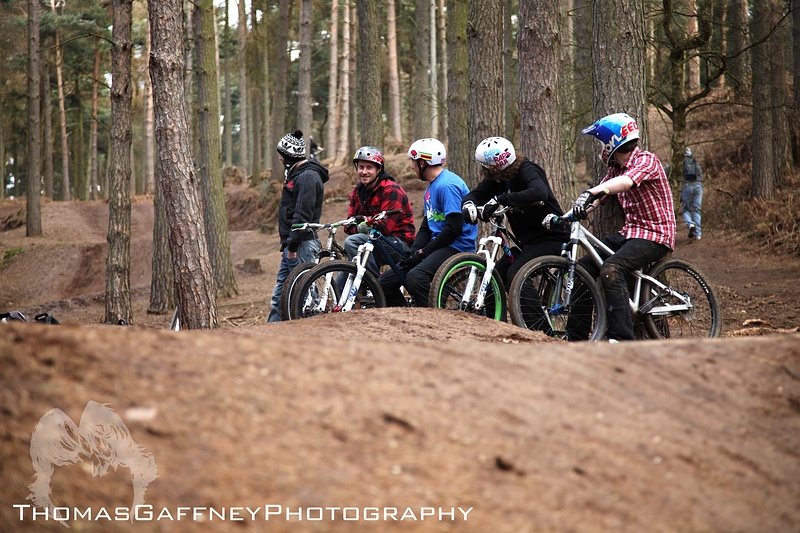 Is it a challenge to keep cycling photography fresh and original with so many talented guys out there doing it already?
Definitely, like I say I try and find different angles and stuff, but then I log on to here and my confidence is blown by so many people doing it and all to an immense standard. But I think riding really helps with creating angles because you stop and think, "a picture from there would look good." Worst feeling is seeing something epic and not having your camera. 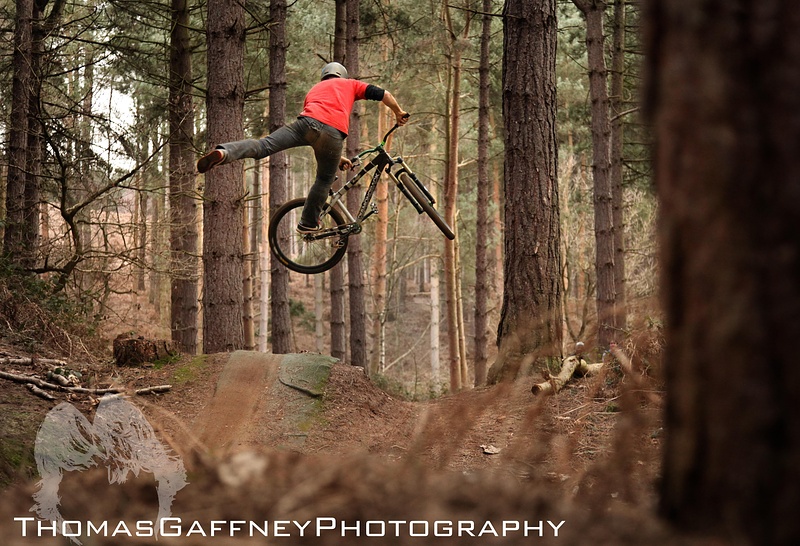 Blake Samson at Chicksands
What was it like meeting your hero Steve Peat for a very quick shoot?
It was awesome! I met him briefly at Bala NPS in '08 when I just started to get into photography and riding. Again it's weird as at first you are a bit star struck (Although I wasn't the worst!) but after talking for a bit it's all just like talking to a mate down the local woods, shame we didn't get more time. 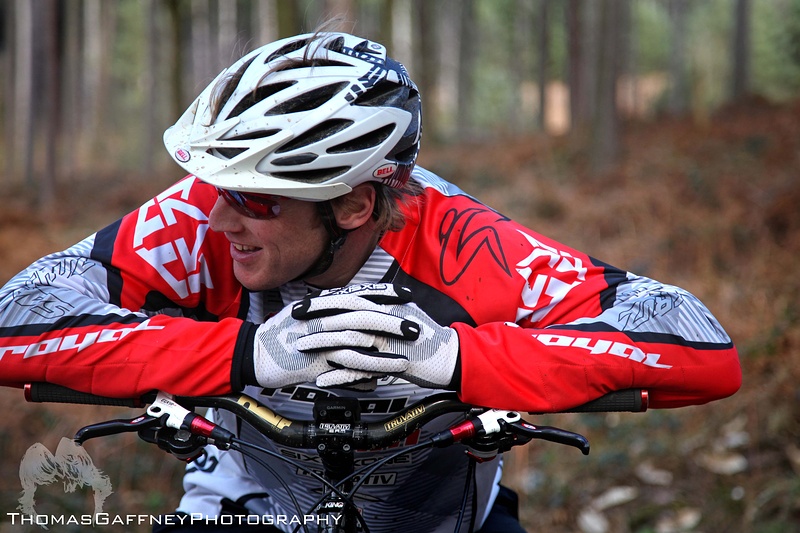 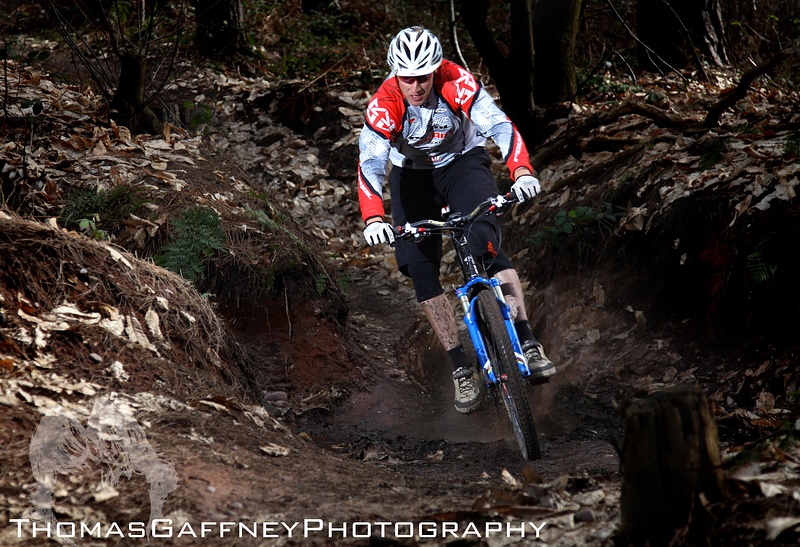 XC training with Steve Peat
You're covering most UK national races, Pearce rounds and other bike events - if people are wanting to get some pictures off you how do they do that?
Just keep posted on my race flickr for a few preview images and then take down my e-mail, send me the race number and what bike/attire you had on and that's it. I don't charge much and hope to get a different style of image at each round. 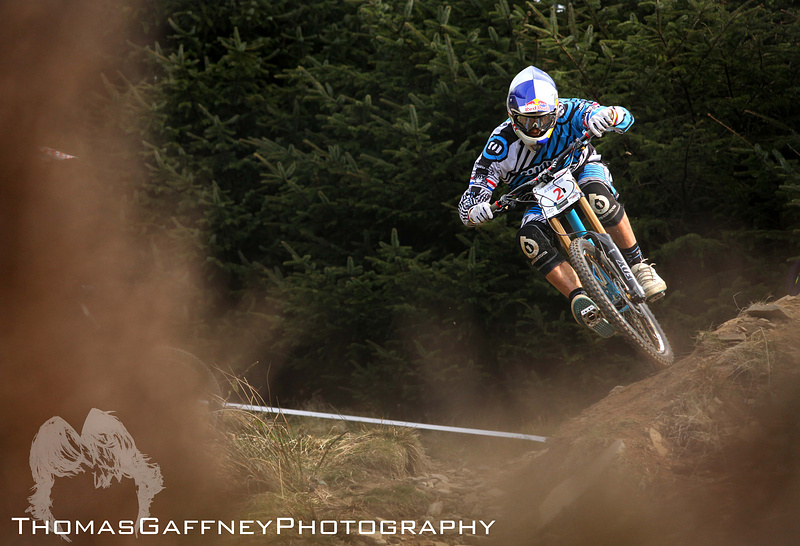 Gee Atherton at Rheola
Anyone you want to say thanks to?
First of all is my partner Steph, she's been amazing straight up and supported me and missed times seeing me and not grumbled once, even enjoys coming to watch every now and again! She's always picked me up when I have hated my images and just been the best. Thank you.

Also John Lee! As without him I wouldn't be known to anybody, wouldn't have had the privilege to work with such talented people and wouldn't be doing this interview today! So cheers pal! As ever it's much appreciated!

And also just everyone I ride with and that's pushed up the hill countless times just to come down for a snap! 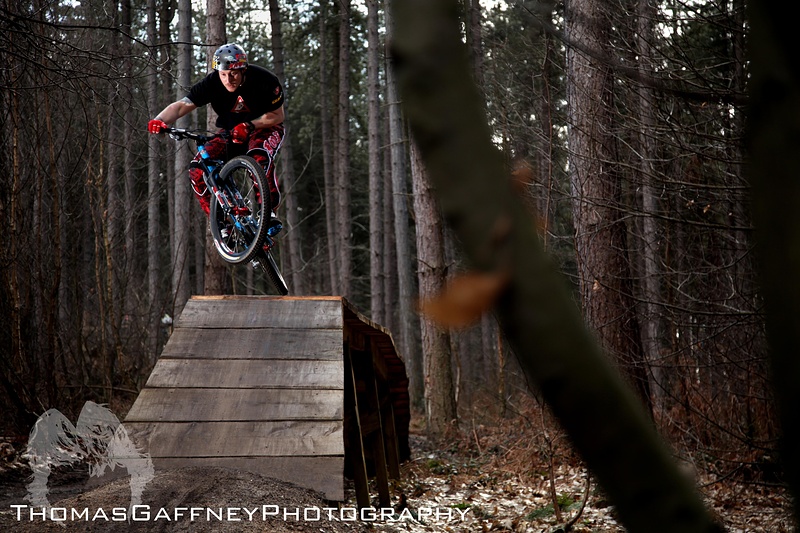 zwitter77 (May 2, 2010 at 8:42)
great pics! but i love the shots in natural action! during the races, training sessions or just freeriding and taking shots only whit the camera!! taking a good photo in that way, for me! means a lot! and.. yeah... i ride bike and thake photos...unfortunatelly i take better photos...

pslide (May 3, 2010 at 5:30)
Tom's got a good eye for unique shots - if you hunt through his galleries you'll find shots even better than the ones posted. He's got the talent to be one of the greats I think.

jumble (May 3, 2010 at 9:56)
definatly! Tom picked these shots and it was really tough getting him to pick so few considering he has so many on his computer and on pinkbike!

steezysam (May 2, 2010 at 1:13)
Overall sick shots, but it looks like you only learned the rule of thirds about two thirds of the way through the article

Seriously, though, not hating. You've got some talent behind the lens for sure.

Do you ride local in Burton ie: Cannock Chase, Alvaston Bmx Track or just around the town centre. ?

linton-photo (May 1, 2010 at 6:11)
You didn't read all the article did you? He said he uses a Canon5D MKII which is a shit hot camera and not really meant for this kind of work but it does it well, better than I ever thought it would

Nice shots by the way

Who cares what you get your images with?

, I meant it's not supposed to have as good(fast) an auto focus as the 1D series, but after playing around with it over the last few weeks I've found it to very capable of MTB photography.
I'll stick a few up I took of young Lewis

andydunwoody (May 3, 2010 at 2:51)
Cool. It's amazing when you read your (as in mine) replies back they sound incredibly rude. Not intended!

I see what you mean. Yep I can vouch for the 1ds MKII's autofocus. It is very good. One of the reasons I hang on to that camera. Although it will be interesting to see what the MKIV is like. Perhaps it may tempt me.

SXbegins (May 1, 2010 at 4:09)
Maybe cause he's taken better photo's than you have? Doesn't have an attitude and is basically the kind of guy people would want to hang with!

Could you boast them Qualities?

Nice one Tomo, keep it up!

All I'm saying is there's better photographers out there that deserve the publicity.

Great for him for being a guy people want to hang with but that doesn't translate to good photo's.. Which is what this article is about? Correct me if I'm wrong.

jumble (May 1, 2010 at 4:59)
Tom is on the front page becuase he has been given an opportunity via myself to be thankful of the work he has done for us, some recognition of his work and the fact that he is a very down to earth fella who is beginning to make himself known on the scene. I hope if you ever get given an opportunity like this - no one negative comments you and if they do - someone sticks up for you. Thomas Gaffney is new to the scene and I am excited to see his progression continue in his work

rob-k (May 1, 2010 at 6:58)
Stoked-Commencal, you spend half your time constantly critiquing peoples photos and rarely ever say 'wow thats awesome etc' yet your photos are noware near as good as you would expect considering all the negative comments on other peoples work! nice pics tomo, keep it up!

SXbegins (May 1, 2010 at 10:04)
Sorry about that Stoked Commencal....... my apologies, I read your negative comment and immediately clicked on your profile (as I usually do when somebody has said something negative about someones VOD or POD) I saw your pictures were not too brilliant and wondered why you had bad mouthed Tomo's, that's when I decided to make a voice my frustration!

It just kinda frustrates me when I see riders bad mouthing other riders saying it's a crap shot or crap trick or whatever when we all started out somewhere and everybody has different skill levels (if there wasn't there would be no stand out guys, No?)