by BigMtnEnduro
Views: 14,768    Faves: 27    Comments: 1
Racers were challenged to two days of racing on the most diverse trail offerings a single venue has ever offered, including the iconic "Whole Enchilada" and the "Magnificent 7" trails. Everything from sub-freezing temps on high alpine trails, to slick rock in the desert, the finals in Moab tested every facet of riders' skill and fitness. 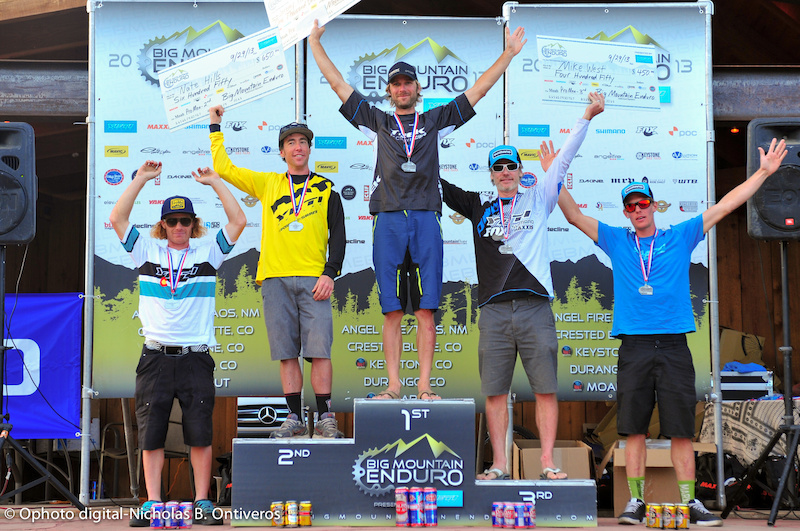 After five stages and an hour and a half of racing, Jeremy Horgan-Kobelski (Trek Factory Racing) stands on top of the podium next to Nate Hills (Mavic/SRAM/Yeti), Mike West (Yeti/FOX), Alex Petitdemange (Yeti Cycles/Smith) and Chris Johnston (The Nomads). 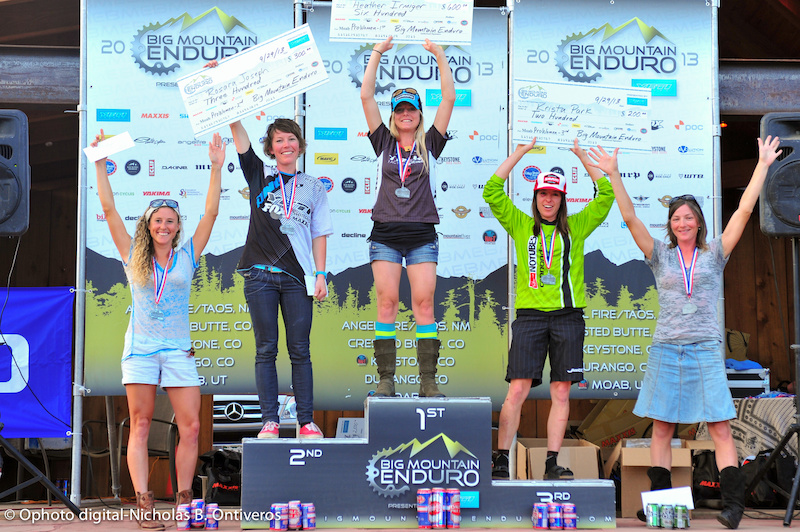 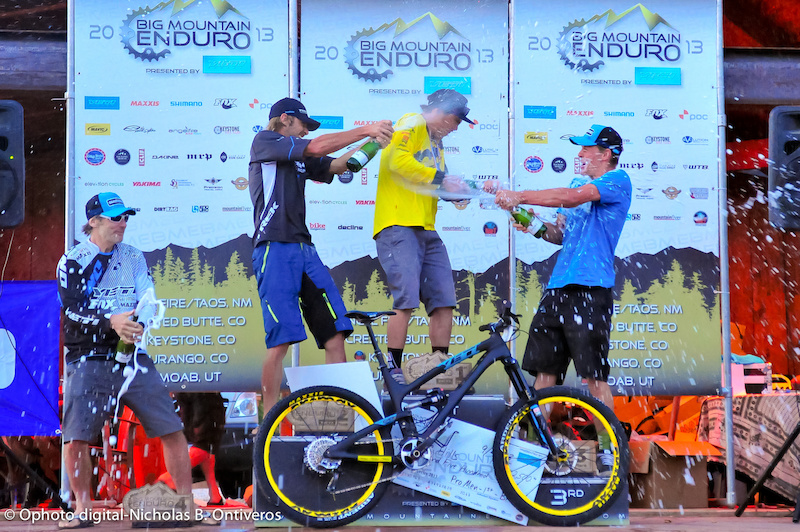 After winning the Whole Enchilada in 2012, Hills stands on top of the podium again, this time for the Big Mountain Enduro Series Overall. "This is a cool series to win the overall, because of the well-rounded nature of all of the courses. Every weekend dished out something different, so it was a true test to the best all-around rider," Hills said. 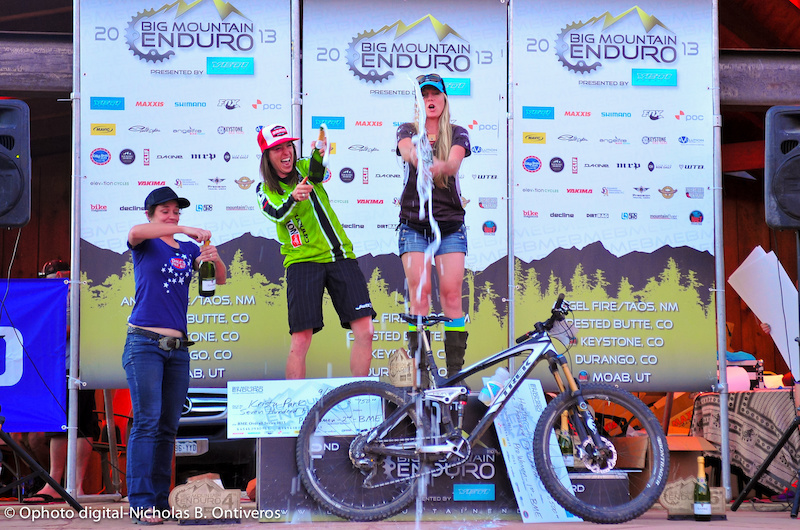 Irmiger was no stranger to the top of the podium all season long, winning the Big Mountain Enduro Series Overall. Park, a consistent contender, was tied for first coming into the season, and took second by a small margin, followed by Jill Behlen (Tokyo Joes), Cait Dmitriew (Oskar Blues) and Lea Julson (Tough Girls Cycling). 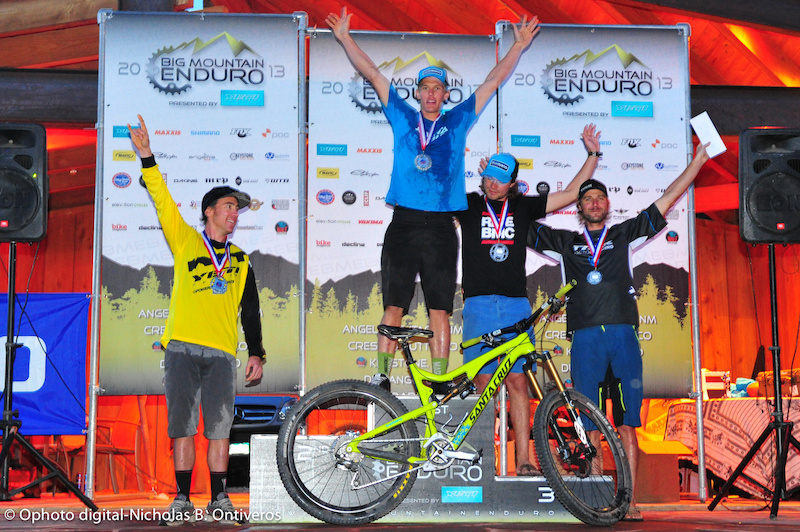 Johnston was elated to win the North American Enduro Tour for 2013. Hailing from Vancouver, Canada, Johnston adapted to all of the different race courses part of the overarching tour, to stand on podiums all across the continent, proving that true champions come out on top, even when they are not on their home turf. Adam Craig (Giant), Aaron Bradford (BMC), Hills and Horgan-Kobelski accompanied Johnston on the final N.A.E.T. podium. 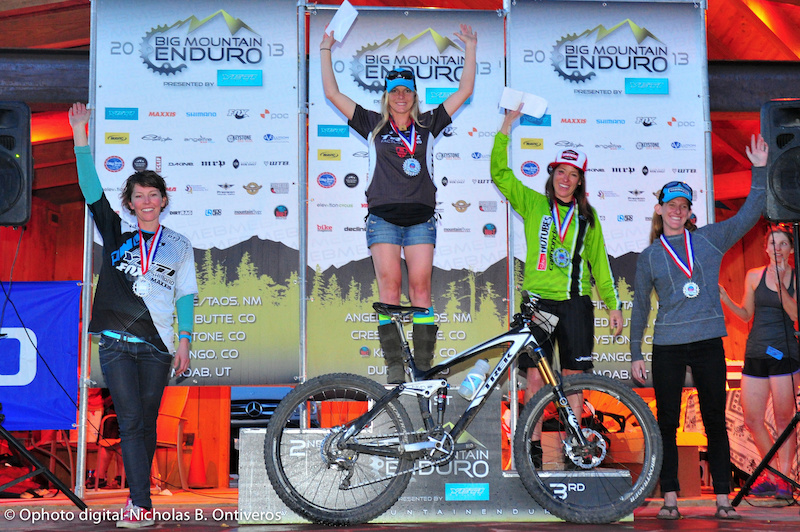 Irmiger tripled her podium appearance with the N.A.E.T. win for the Pro women. Joseph was second, tied in points to Park with the finals as the deciding factory, and Kelli Emmett (Giant) and Margaret Gregory.

E-ROG (Oct 3, 2013 at 7:57)
The Big Mtn Enduro Series was awesome this year and will probably be even better next year. Yeti did a good job with sponsorship and representation at the events but sorry to say it, this recap Video was terrible, didn't do the series justice at all.

danhillracer (Sep 30, 2013 at 17:46)
Wow this looks so fun! Never connected moad with high mountains and trees (especialy snow!) But this looks amazing

dualsuspensiondave (Oct 1, 2013 at 8:45)
Yep, looks like there is one up there. Ignorant wheel size debate commence.