Five dogs rescued from shelters tell the stories of their new lives after being adopted by owners in North Vancouver, who all happen to be mountain bikers...

It's pretty universally agreed that dogs are awesome - whether as trail dogs, best buddies, or ideally both! 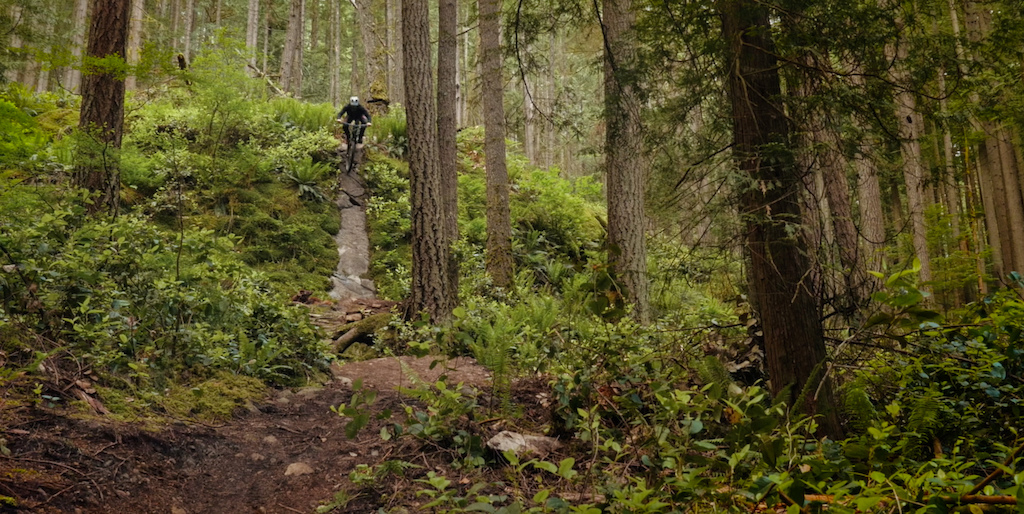 But what many may not realise is how many former friends or would-be buddies are put to death every year. Whether lost, abandoned by their owners or suffering life on the streets, there are simply too many dogs for shelters to care for, which leads to many being euthanised, in some cases within days of arriving at a shelter.

10% of animals in shelters may not sound like a lot, but in reality that equates to over 10,000 euthanised animals a year in Canada alone. In the US, the figure is closer to a staggering 1.2 million.

Trail Floof shows there can be a happy ending for stray and shelter dogs - join 5 North Vancouver puppers as they tell their stories living with their new owners who, whether first-timers or experienced riders and trail builders, are all taking their new friends out with them on the trails.

A big thanks to North Vancouver-based First Mate Pet Foods for supporting the film and helping small projects like this become a reality.

LuisCR (Oct 4, 2020 at 7:31)
Those dogos have superb trail etiquette. Mine is a 14 months old Lab that is a mad beast in the trails. We are having a very hard time to learn how to ride down the hill safely.

My trails are short and not much steep, kinda flow trails with medium features. Previously I tried to keep the dog behind me, but in the jumps he tends to overtake me while I am in the air in order to join me (literallly) in the landings. Lately, I'm encouraging him to run in front of me, but sonner than later he stops in the middle of the trail to see what the bald monkey is doing.

During the up hills its ok, he waste his endless energy chasing rabbits.

Any tips on this will be very wellcomed.

UncleAnti (Oct 4, 2020 at 8:37)
That's great my man! I think it is like anything else. You guys need to practice in non-mtb scenarios to develop your chemistry and, more importantly a vocabulary that is understood by you both to mean very specific things. Your pup just needs to know what the current expectations are and you need to be proactively letting them know what thoae are. People probably think Im a crazy person having turrets syndrome conversations with myself in the woods but no, Im just talking to my pup.

jimjordan23 (Oct 4, 2020 at 9:03)
I have a 7 year old Golden Lab that sounds similar to yours. In the woods he becomes a crazy wild animal and runs all over the place. I decided after a few years it wasn't worth it bringing him because of the chance of running into wildlife and other bikers going the other way head on. Luckily I don't have any horror stories but I stopped it before that happend. He has early arthritus as well in his front elbows, and I'm sure it's from riding steep trails. Dogs putting the brakes on is pretty hard on their elbows, especially if you have a thick dog who isn't that agile and graceful lol. Otherwise riding with your dog can be some of the best rides

LuisCR (Oct 4, 2020 at 15:39)
Hahahahahahha! Touret syndrom, that's a legit analogie and yes, I'm yelling comands all the way down. I did like you sugests with all my dogs but this one is a special one. It's not anxiety, its a sort of focus and determination. Somehow he enters the zone when I stand in my pedals and begin the descent. Is very young btw and we are inproving in our rides and luckily he is very polite with other trail users

kipvr (Oct 4, 2020 at 16:04)
Teach him to ‘get back’ by holding out a treat behind you whilst walking and letting it go after increasingly longer periods, praise him lots when he goes behind you. Then do it whilst jogging. He will soon learn ‘get back‘ means go behind you, then the hard part is getting him to understand it applies to your bike also. Personally I ride with my dog 30m in front, that way I can always see him and that he’s ok. Occasionally I’ll let him chase a deer for a minute across the open landscape then I’ll call him back and treat him generously for his obedience. Never ever shout at a dog that’s just come back to you. Dogs and group rides imo is unfair on the riders and dogs if they aren’t trained, I naively learnt the hard way. Best thing you can do for your dog is not feed him grain or rice based food, he is a carnivore, feed him unprocessed meat. 14months isn’t old enough for hard rides, just really gentle stuff, his growth plates aren’t fully formed yet.

LuisCR (Oct 5, 2020 at 1:27)
@kipvr: Hey Thanks! Plus here in the SE of Spain is very hot so we adapt the ride; mostly in the dawn, all the descents takes less than a minute and sub 10 km rides, after each descent we slow down (is my first Lab and I read that they are prone to exercise induced collapse).

I utilize the word 'back' when I want him to stay behind me in the trails; in english, its easier to say and 'atras' (spanish) is already employed for other command. He is used to the most common orders and performs nice while walking or jogging, even with the bike most of the ride is ok. Is in the jumps or drops, while I'm in the air when he gets more excited

malthebear (Oct 5, 2020 at 4:37)
Got two Spaniel trail doggo's, couple of things I found helpful (well with number 1, number 2 just learnt from copying number 1), get them to understand and follow a good 'heel' command when walking off the lead (ie: walking on your heel and not cutting in front of you - although a gentle prod with the boot reminds them why they shouldn't cut in front and gets them back in line). Once you've both got the hang of this try transferring it onto two wheels. The 2nd, and it sounds worse than it actually is, had a couple of incidents with both when they were learning where they cut in front on a descent and ended up with tire buzz to the backside, soon gets the message across, now they just track the back wheel on the downs. Group rides are interesting, as both of them find the fastest rider and just stick with them, so much for loyalty. Probably worth mentioning that both of mine are girls so slightly less 'strong willed' than boys are. Hope it helps.

PilchardTV (Oct 6, 2020 at 10:45)
They're not all as well behaved as they first appear! Although they are all great dogs, we definitely had quite a few failed shots as they would run off doing what they like. Izzy is super excited about everything and although she's a great trail dog, she often runs off into the woods. Although she always comes back again, it just made filming a little difficult! Duke almost never leaves Anthony's side, sometimes when I'm out riding with him I'll be brushing him with my leg during pedalstrokes as he loves being close to people! Although one shout of 'go behind' and he'll chase safely all the way down. Axel is just the most relaxed and chill dog, extremely chill - when riding home one day we had to go back and get him because he was busy having a sniff and a sit down! Rosie has been trail biking with Gav for a few years now, it's definitely taken time and patience for him to get her where she's at now, mellow short rides at first so she can learn what to do and how to be around the bikes - same for Izzy, Chris and Sharlz take her on short rides a lot to be more familiar with the bikes. And Rodney isn't really a trail dog! We just took him out for a couple of really short sessions to not tire him out. But he absolutely loved it charging after Sean for a few minutes at a time. He'd quickly tire and sit down so then we'd take him home or rest him for 20 minutes.

joebear80 (Oct 4, 2020 at 4:33)
Great, now I've gone and caught feelings.
Awesome video and I totally agree with @dirtybikejapan, that this is one of the best segments I've seen all year.

BartDM (Oct 4, 2020 at 3:32)
it is a such wonderful thing when you give something and immediately receiving it back; dogs are awesome!

BreezerXCer (Oct 4, 2020 at 7:46)
Super stories, especially background how each one came into your familys Loved the piano music too.

prodigalson (Oct 4, 2020 at 9:53)
Love it a hundred percent. AND, love owners who pick up their dogs business a hundred and ten percent. Just sayin.

brokemywristbyfallingoffmybike (Oct 4, 2020 at 12:36)
Brachycephalic (I had to google how to spell it) dogs (short nosed dogs like bulldogs) are not made for extended exercise, so make sure you take breaks to lower their temp and let them breathe.

I'd very, Very much like a Pup, to be a Trail Mate with all of my two wheel usage, and as Shop Dog to keep me company while I make frames, but have to wait for a (fair) few operations to be done, so I can be active enough to give a Pup a good life. We've a Jack Russell Rescue Kennel nearby, and I see so many of them I'd love to have as a Buddy.

A worry in my area is the (hordes of) Snakes though, so I'd have to work out a way to train whatever Pup I get, to Not get near them. We have a lot of Dogs around here get nailed by Snakes, unfortunately.

PilchardTV (Oct 6, 2020 at 10:31)
Yeah bud I totally agree, I was a bit worried about featuring Rodders and the false impression and feedback it could create. I'm glad the note at the end served it's purpose in that respect! Jack Russell are wonderful lil buddies! Hope you're able to get to the point you want to be at so you can get one of them in your life.

captainbringdown Mod (Oct 5, 2020 at 7:19)
Hahahaha, the intro for Rodney was great. As a bulldog owner, it's hysterically accurate and Rod's amazingly fit compared to my Gus & Helga... At 13, I have to wake Gus up in the morning...

PilchardTV (Oct 6, 2020 at 11:28)
Thanks Isaac! We actually had to film his section over two separate sessions and give him a lot of breaks to make sure he was okay. But he was absolutely charging behind Sean!