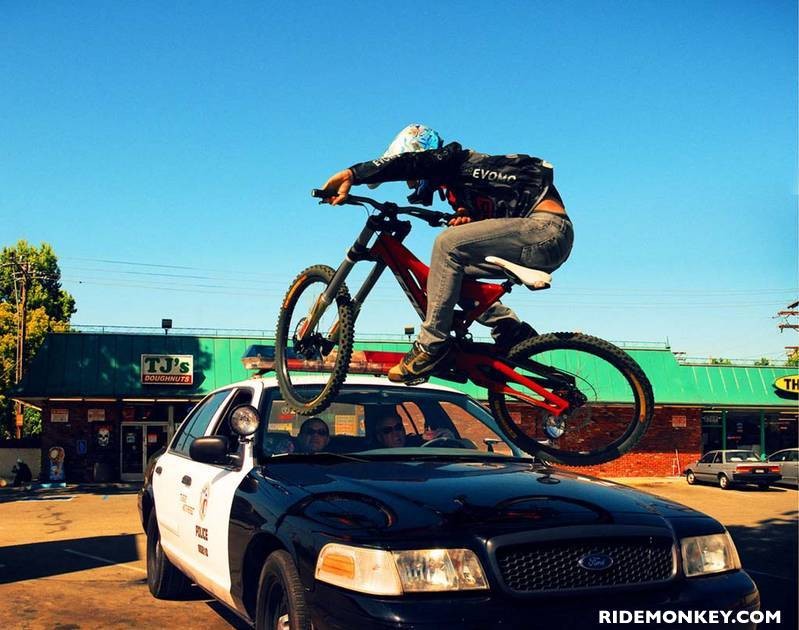 Join Pinkbike  Login
Tweet
some insane pic i found im prety sure its photoshoped but still that f*cken funny
Currently browsing: old-photos Photo 10 of 117
Prev
Next

wadeness (Jul 1, 2008 at 22:02) (Below Threshold)
you can shop in refelctions tho
i dont know im jsut keep looking at the back tire and somthing there just dosnt seem 100% to me + the fact that its a fose if it was like a .243 er somthing like that i could not think twice about it

o8demo8 (Jul 2, 2008 at 8:54) (Below Threshold)
i think the reflection has the padals in a different position. in the reflection the pedles r verticle and on the bike horizontal.
(sry for bad spelling......public schooling failed me)

killacali (Jul 2, 2008 at 20:51) (Below Threshold)
pretty sure its real fools do those look like the pigs(i mean cops) in your town? anyone can go buy a police taurus...shits sik

And its a sweet picture

noobasian (Jul 13, 2008 at 13:25) (Below Threshold)
That wasn't police brutality. In my opinion police should have the right to shoot if you run.

shibbydirtjumper (Jul 16, 2008 at 9:14) (Below Threshold)
that looks like the place mclovin used his fake id to buy the money,, i got the idea from the second comment

YetiRider88 (Jul 16, 2008 at 19:35)
hey guys not all cops are dicks, some will let you do shit like this if you are friends with them or somethin sick pic though

mavster (Jul 24, 2008 at 6:47) (Below Threshold)
you can Pshop reflections and buy the fuzz some Duh'nuts and thely let u do any thing

Or a half eaten doughnut.

akozz (Jan 2, 2009 at 8:27)
oh come on, alle you photoshop maniacs who always can find proof that its photoshoped even if its real. Get a life

hendu (Jul 11, 2008 at 23:16)
stop dissing cops there doing there jobs and people piss in their corn flakes all the time and deserve shit like this and a job does not define what you eat jsut cuz your a cop does not mean you automatically love donoughts

dcman6491 (Feb 2, 2009 at 17:38)
not photoshopped but not real. no LAPD shoulder badge and they are not following police dress code, as well as they are running with their weapons out. that is training you only receive in the military. it isnt photoshopped but it is set up. look at the other photos previously linked.

garylucas (Feb 24, 2011 at 15:31)
And fast forward to 2011,and i can confirm that this pic is indeed a still from a set up video,probably staged by Evomo,what with the rider having Evomo wrote on his jersey and the Evomo logo posted on the wall at the side of T.J's donuts entrance.I've seen the whole video it's only a couple of minutes long,the two blokes playing the police are part of the crew.I think the footage of this is an extra on a D.V.D,i.e N.W.D,Sprung,Earthed that kind of thing.No links unfortunatley,but i'm sure a lot more people will be able to confirm what i already know.This was a set up,and a real good one by the loox of the comments above.
Gringo.

i didnt notice until i read this but u can see the cops inside the car ducking.

luigi (May 7, 2010 at 9:58)
The picture does look photoshopped purely cause where is the shadow from the bike? some of the shadows on the bike/biker dont match up with the same angle of the other objects.

recklessness (Jul 11, 2008 at 0:20)
This dude has balls of steel. Sucks that he booked it to a dead end. Fucking crazy pigs put a gun to him and arrest him and shit. Fuck tha' Police and free the Pig Hopper.

1) No shoulder badges. Shoulder badges are part of uniform code in LAPD.
2) One cop has white socks. Not allowed in LAPD.
3) They run with weapons in hands. Once again, police are trained to keep them in holsters until suspect is caught and on ground. But even then, they do not draw their weapons unless suspect in trying to get free and/or it is a semi-serious offense (which this is not)

ninjatarian (Jul 17, 2008 at 17:19)
i read the story about him getting arrested, and it said nothing nor did it allude in any way to him jumping a police car, it said they got there after he had already jumped cars. besides, how would they have set up a jump to do that, with a camera man standing there without the cops knowing and ironically with a shot of a donut shop in the back? flame away, but this is completely set up

Props to you man this should be POD whitout a doubt

Ride15 (Jul 12, 2008 at 15:43)
sweeet picture but i think its photoshopped, i mean what guy rides the streets with a full face helmet and a downhill bike? think logical people, and reflections are possible on photoshop. but still well put together

skinnyskinna (Jul 18, 2008 at 12:04)
ITS NOT PHOTOSHOPED due to the shaddow on the car hood it would be neer to imposible to do that on photoshop well it whould take long

catryder17 (Jul 21, 2008 at 10:34)
That actually looks like the Parking lot in superbad where he gets knocked out at the liquor store lol


thats the story of it ITS NOT FAKE!

nouser (Jan 30, 2009 at 14:43)
why do all you f*ckin canadians and americans ALWAYS thinks something is photoshopped just because its a good picture!!!!! your all clueless!!!!!

if it is its the best i ever seen

but it made me laugh

the photo is taken directly in front. you can't tell me the cops ain't sayin something if you stand in front of them taking pictures.

also, if you look on the evomo team blog where the picture series with the full story is.

how the hell did the photographer run so much fastern than the police? i mean, he took pictures of the police running from back, next pictures are where he took pictures taking that guy from the fence. he must have been running like that jamaican bolt unhuman guy

for me i'd say FAKE. but make your own opinion and don't be dumb.

JesseBMXs (May 29, 2011 at 18:41)
me and my buddies have always wanted to do this on our BMX bikes and scare the shit outta those cops, hahahaha

crazydutchmen (Jul 16, 2008 at 19:33)
haha i bet they set up a jump and just waited for the cops at the donut shop
just like when you get some corn and put it by the deer stand

Driders (Jul 19, 2008 at 17:28)
all you fucko who said it was fake look at the reflection on tha hood you fucking dick head try to do that by computer

marseer (Feb 5, 2010 at 17:38)
just read every comment, and I still think its possibly photoshopped. the reflections of the tire graphics dont line up at all between the hood and tires.

deakmaster (Apr 5, 2010 at 20:14)
and if you look closely theres a guy jerking off in the parking lot. obviously he would not be there if it was fotoshopped. unbelievable fakeness.

this shop is in Superbad. or no?

recklessness (Jul 29, 2008 at 11:17)
That's a shitty excuse. All I do (other than biking) is smoke weed, and my spelling is usually on point. For f*ck's sake, I've had 2 bong hits while typing this comment. Stop making excuses and go to school. Stupid is as stupid spells?

Volcom66 (Dec 15, 2010 at 7:44)
some ppl just think faster then there typing so words come out wrong such as foes, fose do you see the similarities ??? says the same thing if your to dumb to under stand wut it means then i think you should go back to school ... not trying to be a dick or nothing but your just as dumb if you make fun of the guy or call him down cuz he didnt spell foes right like come on find something else to get bent over spelling is not it ....