KennyWatson sarahmoore's article
Jan 18, 2022 at 6:07
2 days
Atherton Bikes Launch Direct to Consumer Website Sales
@Almazing: eh you're right sorry, I blame lack of coffee! There's a line right under the dimension for reach, but they don't dimension it.

KennyWatson sarahmoore's article
Jan 18, 2022 at 5:47
2 days
Atherton Bikes Launch Direct to Consumer Website Sales
@Almazing: if you click the link for the "tech sheet" on the website, it's listed on that geo drawing. I agree I'd rather have it straight on the website, but to be fair the info is there.

KennyWatson sarahmoore's article
Jan 18, 2022 at 5:45
2 days
Atherton Bikes Launch Direct to Consumer Website Sales
Yeah. 22 sizes with options for shorter riders and longer reach in the small sizes and options for taller riders in the larger sizes, just like everyone else. Option to go custom for about $1000. Definitely something to complain about.

KennyWatson alicialeggett's article
Jan 17, 2022 at 18:22
3 days
Spotted: A Chromag Full Suspension Bike, This Time for Adults
I kinda agree. I was expecting something that looks more like the previous gen surface, the classic diamond shape with chainstays and top tube lined up, vertical shock. Like a swarf contour, or a steel transition spur I'm happy it's not though because I am out of N+1 credits with the Mrs. 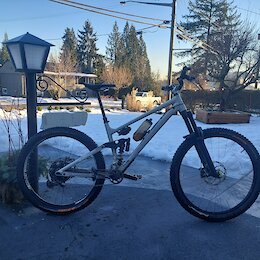 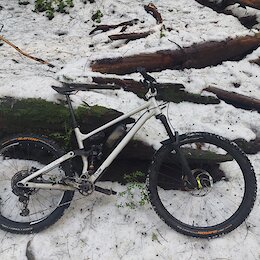 KennyWatson mattbeer's article
Dec 27, 2021 at 8:11
Dec 27, 2021
Burning Question: How Much Do Water Bottles Influence Frame Design?
Like they mention talking to pivot, I think the fact that we're designing frames around the standard bottle shape, rather than coming up with better bottle shapes, is insane. How can we have a new hub standard or bb standard every couple years, but water bottles? No way man. Keep that style designed around 70s road bikes alive! It's super wierd. I have a yt thirstmaster 5000 on my bike, 835ml bottle that takes up the same space as a standard 600ml bottle, and that's with pretty mild design changes. I think people would be 100% behind frame specific bottles if it maximized water carrying capacity and allowed frame designers to not have to make wierd design compromises for what is a totally arbitrary bottle shape.

KennyWatson mikekazimer's article
Dec 21, 2021 at 19:43
Dec 21, 2021
Field Test: Raaw Jibb - Smooth, Silent, & Sturdy
@justinmaha: Ripmo AF. The bikes are twins and opposites at the same time. The AF is a great bike especially for the money and especially if you're under about 170lb or tend to tread lightly. I'm neither of those things so between the (noticeable, to me) frame flex, somewhat crude cable routing, minimal chain damping, and just overall build/aesthetic, the bike always just felt a little... disposable to me. That's not a criticism, the frame is like half the price of the Jibb, but for me it just wasn't doing it for me. I thought the kinematics were a little wierd as well, but again lighter riders might not agree. It's interesting because the bikes have a basically identical wheelbase with the jibb having a longer rear center and the af having a longer front center. The AF actually felt a little more reassuring in some situations because the longer front center makes you feel less prone to going OTB. The jibb feels shorter and more maneuverable for the same reasons, while having similar stability at speed. Like theu covered in the review the Jibb feels more like a high quality tool than a toy. IMO it's a great bike for someone a little tired of the endless fashion show of incrementally "improved" model years and keeping up with the Joneses. It's a clean, simple, solid rig that works well, is easy to take care of, can ride anything, and can take shit kicking. I see them as very similar, I'd categorize them both as "all-mountain" bikes. I'm 210 with gear and ride reasonably hard, and I found the AF flexy at times. They're pretty similar in a lot of ways, but I'm 210lb with gear and on my better days I push pretty hard. The
Load more...
6,773 views