Treble3 mikekazimer's article
Mar 27, 2017 at 15:11
Mar 27, 2017
Specialized S-Works Enduro 29 - Review
@therage43: I've been riding both for about 4 years now and I don't really see the difference either. I've replaced the PF 3 times because I felt the bearings were due. Ive got the park tool removal tool and press. takes me about 5 mins. has never creaked. Sure, its a little more difficult to replace than a threaded BB, but not as difficult as people make it out. Perhaps its more a case of people not having the right tools and techniques rather than a problem with the system itself.

Treble3 pinkbikeaudience's article
Feb 25, 2017 at 4:57
Feb 25, 2017
Neck Braces - Should You Be Wearing One?
While there are hundreds of emotive testimonials and a lot of clever marketing to suggest that neck braces save spines. There doesn't seem to be any actual medical research that suggests they are effective once all other variables are removed. After a recent online discussion with some people in the field of trauma research I did some searching and reading. But I was unable to find any evidence that they had even been properly scientifically tested, let alone proven effective once isolated from all the other forces present in a mountain bike crash. I've only ever read anecdotal evidence of people claiming they can still walk as a result of their brace. If someone does have knowledge of any such study. I'd be really interested to take a look at it.

Treble3 mikelevy's article
Oct 7, 2016 at 14:55
Oct 7, 2016
Heckler's Rock: The Final Heckle - Video
Agreed, the press that hecklers rock gets is part of the problem. Non mountain bikers see the videos and decide to go up because it looks like a huge party. At the end of the day, nobody wants to stop people having fun, if hecklers could still be controlled, it wouldn't be being removed. The problem has never been people having a good time, its the danger they pose to the general public by throwing things at the lift. Sure there may be a few people on the lifts that think its funny and enjoy the rowdiness. but for the young kids riding the park for the first time with their parents, being chanted at to "suck his dick" and then having full cans of alcohol thrown at you. it just not on.

Treble3 RichardCunningham's article
Sep 2, 2016 at 13:31
Sep 2, 2016
August 2016: Good Month or Bad Month
@stacykohut: I agree that over 75 percent were probably temporary workers, and yes, a lot of them were Aussies. But that is true of any large group of people in Whistler. Its non mountain bikers that are the problem at hecklers. It's the groups of bro's that are killing time partying between winters that head up to hackers rock because they heard it was a wild party. There are plenty of people, from all over the world (Aus included), that would head to the rock because they wanted to see the worlds best, have a few drinks and heckle the riders in the spirit of a good time. But Heckler's became to appealing to people that aren't involved in mountain biking and that was its downfall.

Treble3 RichardCunningham's article
Sep 2, 2016 at 13:18
Sep 2, 2016
August 2016: Good Month or Bad Month
Yeah it is, especially as the a majority of the people that cause the problem aren't mountain bikers. As someone who saw it first hand this year and last, Its easy to tell who are the real mountain bikers that go to hecklers to have a couple of beers, watch some great racing and heckle the riders, and those that don't have a clue about MTB , they just go up for the party. 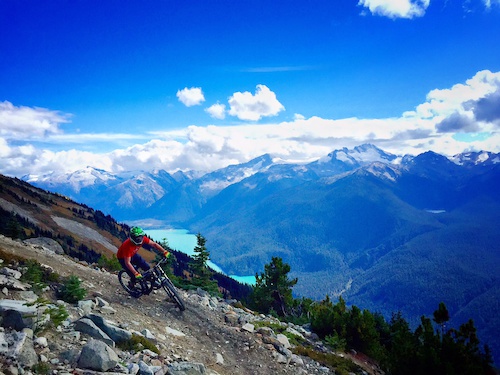