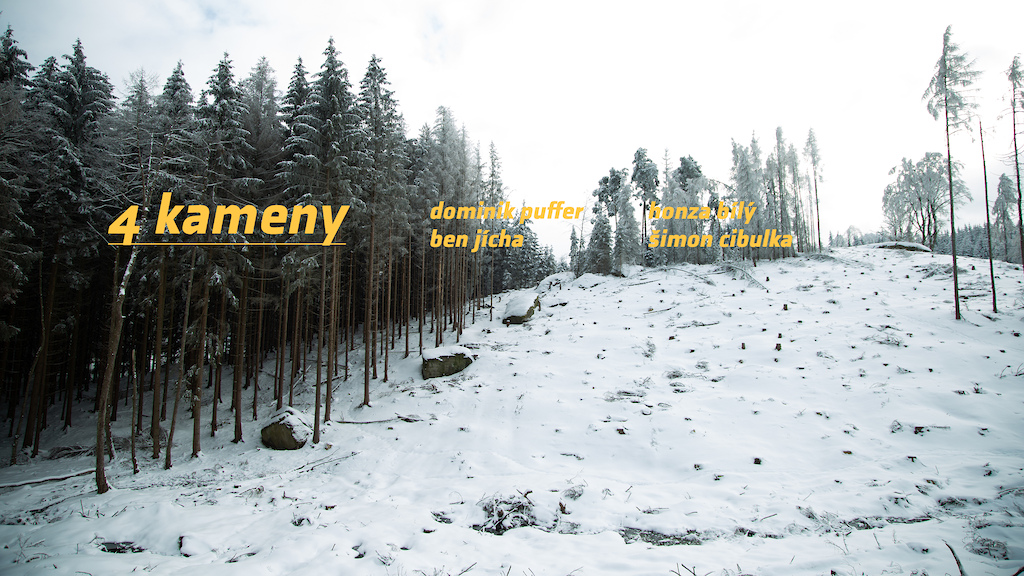 4 stones, this is how we call this spot in a tiny corner of the Czech Republic. The place has a beautiful nature and giant boulders scattered around. On the other hand, the beauty is getting slowly destroyed, because the surrounding forests are being cut down and thousands of trees are disappearing. I don't know if it's because of bark beetles or logging, probably one of the other. It's a sad sight, but there's a little drop of good in it. Big boulders have peeked out everywhere, in which I see riding and jumping over them.

We have already shot a passage to an another video not far from here, which I came across by chance. This time I took the boys to the same area for a walk, to find some more boulders that could be ridden on and filmed.

We drove on beautiful side roads and we haven't even gotten out of the car yet, and the boys were like: Look at that, look at that three boulders, you can drop 'em right? Or maybe a 360… dude, your mom can do 360. The location was insane.

We parked the car and went for a walk. Everywhere were boulders but nothing that would make a rideable longer line. But then we walked into a zone and from a distance we saw 4 large boulders on the slope, which seemed like there could be a line. When we looked at it from closer, all three of us imagined one shot, as I would ride them all in one shot.

About a year and a half later, we actually took that shot! 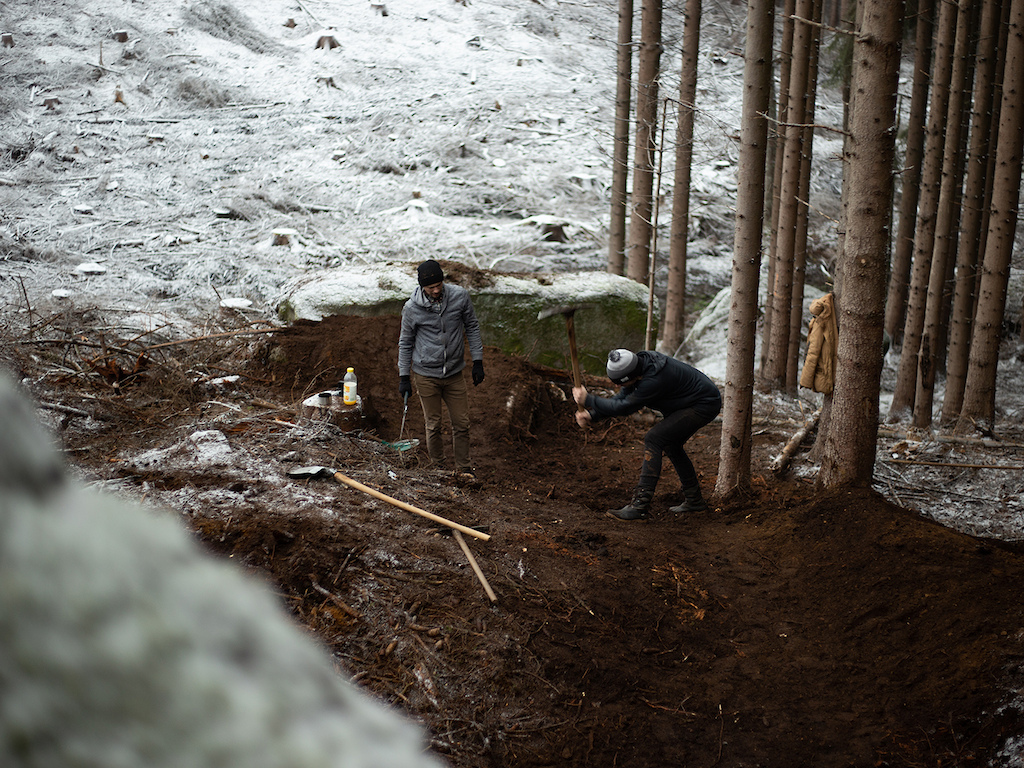 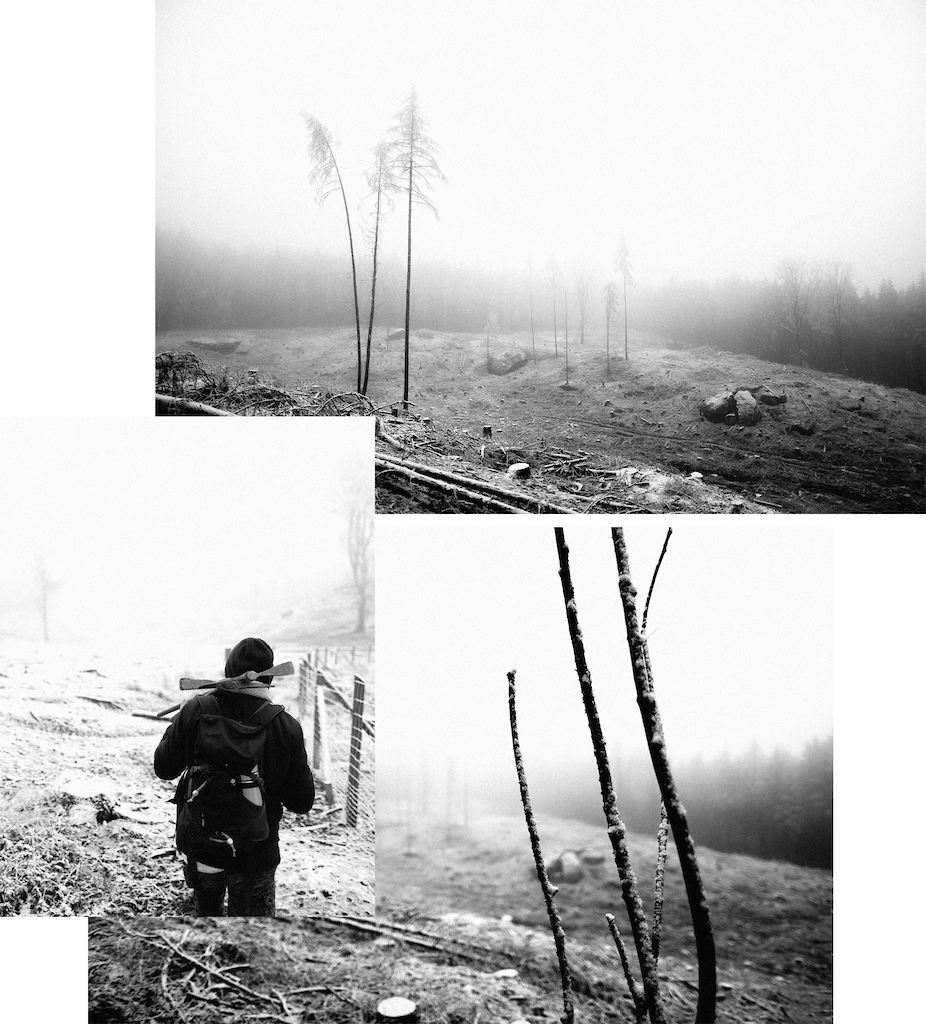 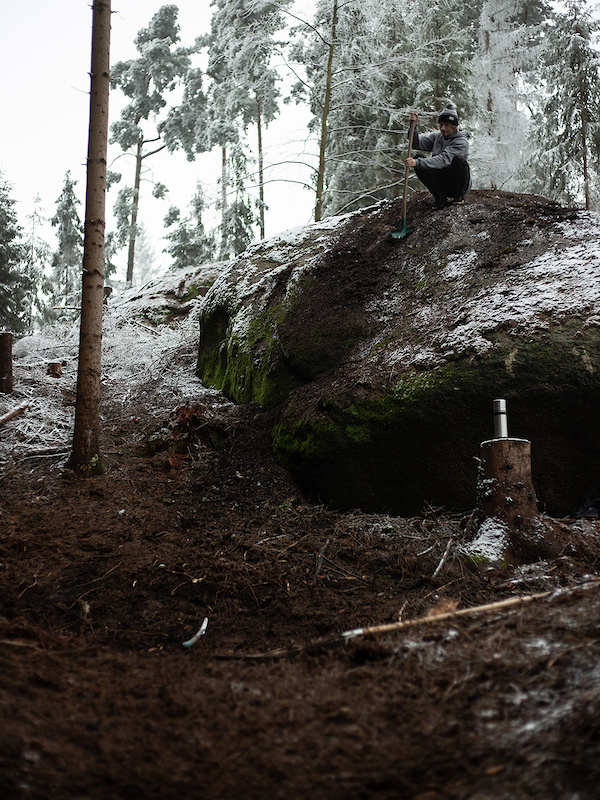 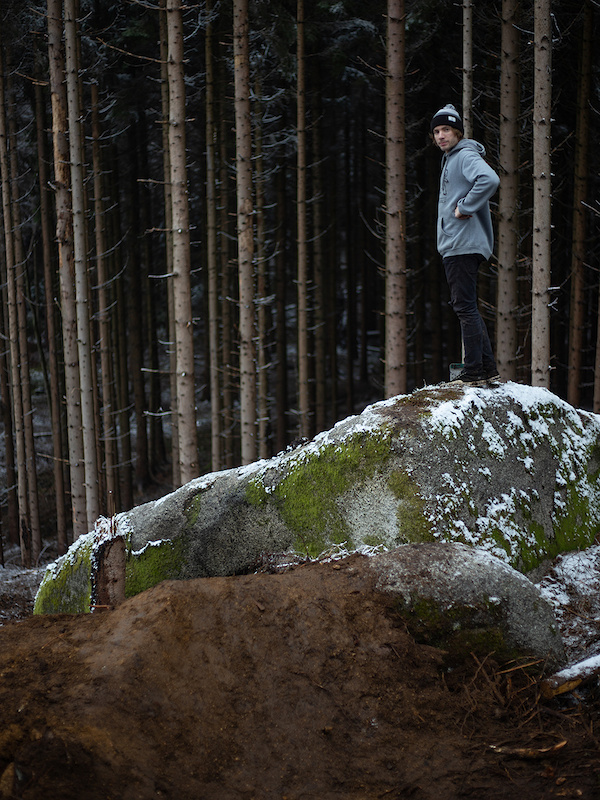 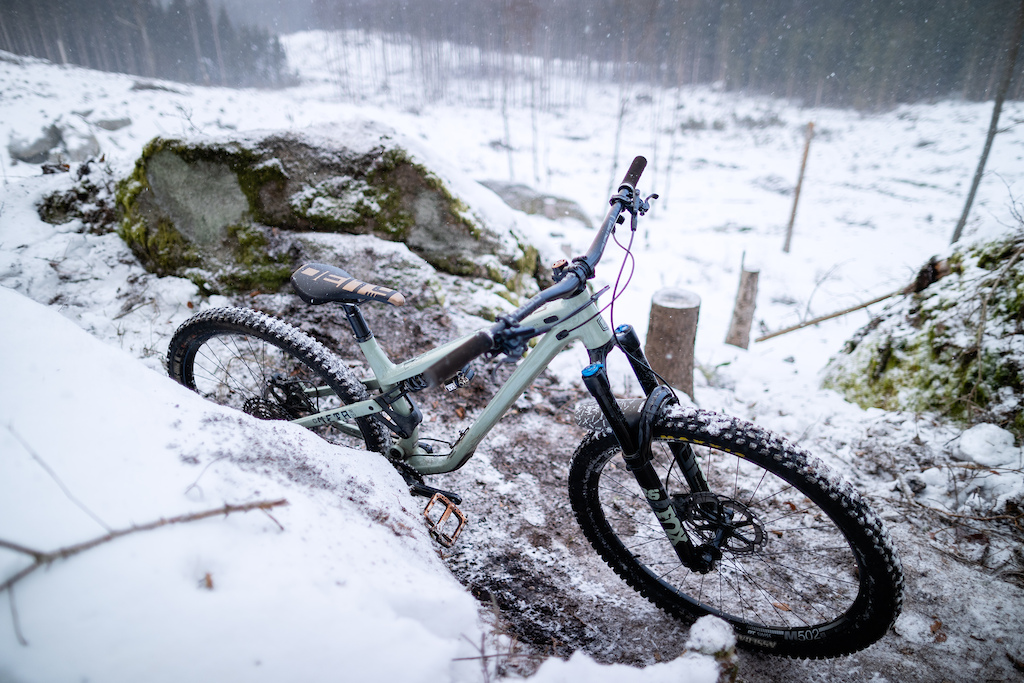 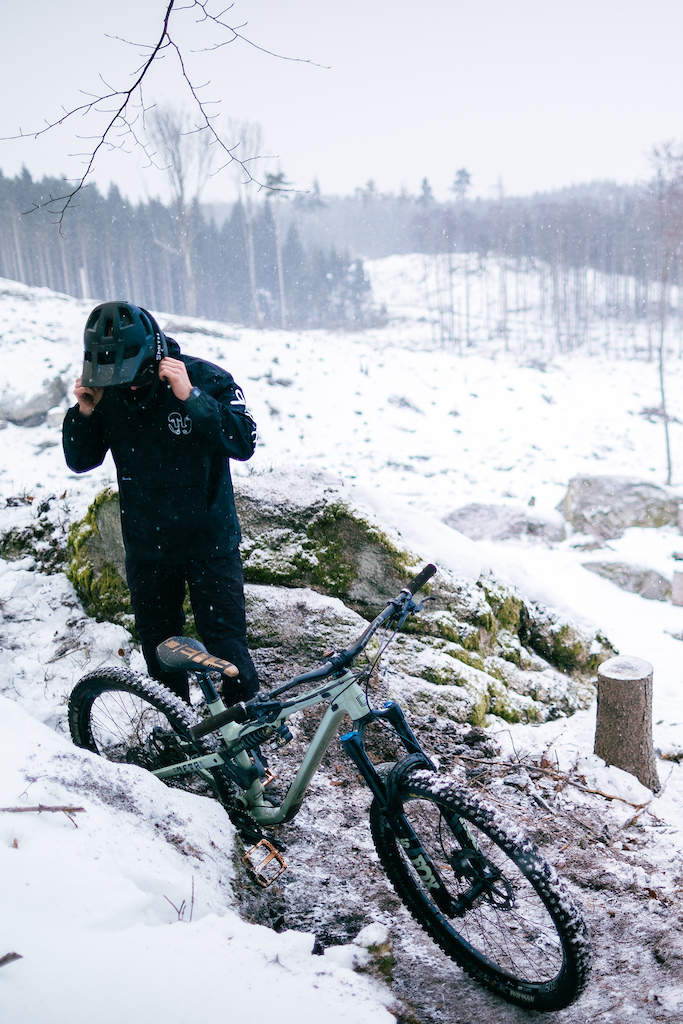 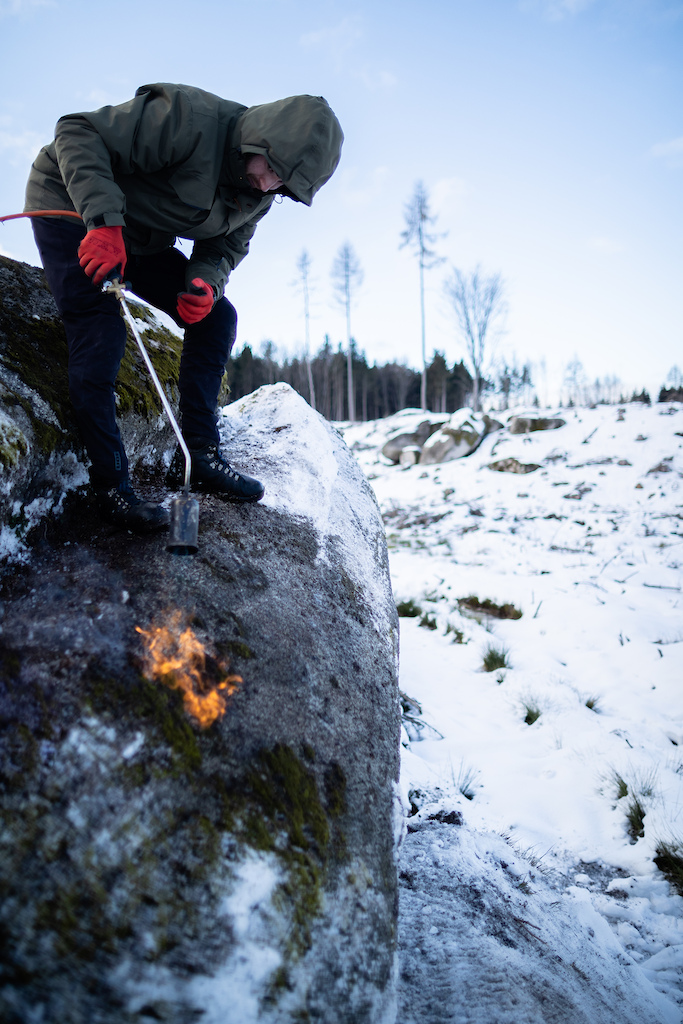 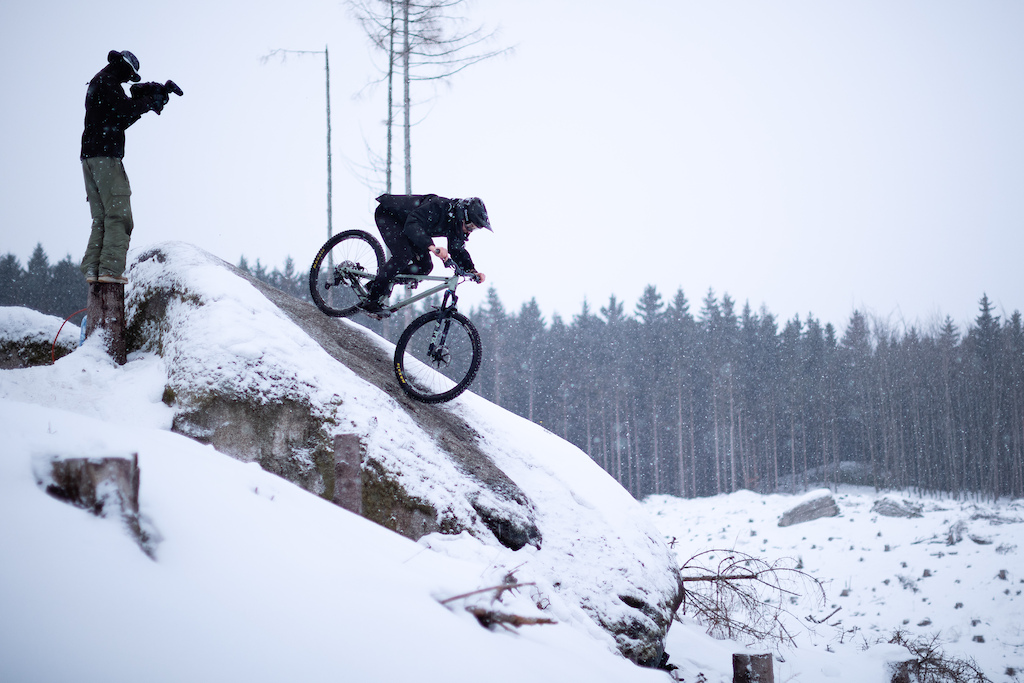 cyclesoul (Jan 24, 2022 at 9:40)
@curendero: ice with soil or mud in it is Hella grippy and the sound ripping through it rules. This area is LOAMER central in the summer so there is nearly always bio matter in the frozen stuff

curendero (Jan 27, 2022 at 5:28)
@cyclesoul: Reminds myself of the trails we have in Vancouver area. All conditions riding indeed!!

asbointeractive (Jan 23, 2022 at 2:06)
Awesome riding and a Subaru Forester sliding round in the snow...ticks all my boxes

Bourdeau (Jan 23, 2022 at 5:13)
Wow, cool video. Wonder how long it too to torch all that trail and if they used studded tires? Thanks a bunch for making and sharing it.

cyclesoul (Jan 24, 2022 at 9:53)
I bet they only torched the rocks to ensure safety. I don't think studded tyres and rocks are a good combo

hcaz (Jan 23, 2022 at 21:29)
Those lines are really cool, the whole video was awesome. Clear cuts have always made for awesome riding and filming, and as much as cutting trees down gets a bad rep, it can be done in a sustainable way to contribute to jobs and GDP. I'm no expert though, and who knows how sustainable each site is if at all. Anyways, I hope they replant so that another generation can rediscover those boulders in the shade.

mtbswindler (Jan 23, 2022 at 8:31)
Its because of regulations, or lack there of. So much wood and furniture is coming from Europe and places pretty close. Kind of sad. The evolution of production around the world, passed us and our zoo books up fast, the world is chopping chopping chopping forests.

bok-CZ (Jan 25, 2022 at 4:39)
Definitely not a lack of regulations, it´s not Ukraine with its endless forests and huge non-controled areas here in Czech. You don´t find here a remote area in real. Mostly bark beetles as also mentioned. It is needed to act fast, cut the trees and move them away quickly to stop spreading. However you correct about the export as something around 50% of the wood is going abroad as here is not enough capacity for processing. In total amount its around 25% of wood exported outside of EU is just from Czech Rep.
These are mainly the forests which has been planted as a spruce monotypes back in the days.
So sadly, the added value as the wood planks and furniture etc is made somewhere else nowadays - Austria, Germany, China.

yupstate (Jan 24, 2022 at 17:42)
Haha, typical Pinkbike snow video. Two inches of snow pushed aside and/or melted so you're riding on dirt and wet rocks with snow all around you. To be fair, way more skilled rider than I am, but the snow isn't the reason for that.

CSharp (Jan 24, 2022 at 9:40)
These guys should come out to Bragg Creek area and blowtorch the trails for us! I'd be happy with riding in hero dirt!

andydmorris (Jan 23, 2022 at 11:30)
Visit an already trashed site then melt the snow using fossil gas to enable a couple hours of fun. A good analogy for the state of the world right now. Ace riding though.

skiandmtbdirtbag (Jan 23, 2022 at 18:28)
You typed this on a phone or a computer that created a magnitude more emissions than that torch.