$45 USD
Bontrager Rally MIPS helmet, black, size small. New in box. It's just a bit too small for my fat head. Here's what the manufacturer says about it: The Rally MIPS mountain bike helmet raises the bar in comfort and protection. Equipped will all the best features including MIPS brain protection system, BOA® Fit System for superior comfort and security, and the Blendr mount system for light and camera integration. Plus extended coverage and ample vents will keep you riding all day on the toughest trails. MIPS (Multi-directional Impact Protection System) was developed by brain surgeons and scientist to help reduce rotational forces on the brain caused by angled impacts to the head Craigslist ad: https://boston.craigslist.org/gbs/spo/d/milton-bontrager-rally-mips-helmet-small/7318032903.html 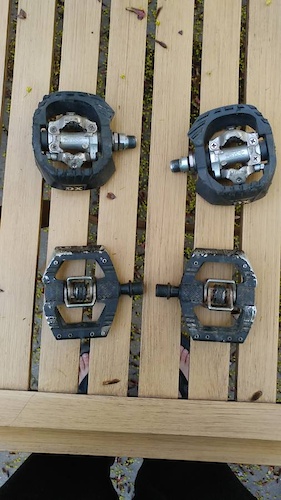 $45 USD
For sale are a pair of Shimano DX downhill clip-in style pedals. These were on a DH bike that I rarely used. They are in very good condition. I'm asking $45.

kpdemello trailforks's article
Sep 1, 2020 at 11:20
Sep 1, 2020
Trailforks Introduces Paid Trailforks Pro Option
@notdentist: My data being free to me is not the issue. I already have my data. I had it before TF. The issue is that many volunteers who uploaded data did it so it would be free to other people visiting their community.

kpdemello trailforks's article
Sep 1, 2020 at 9:02
Sep 1, 2020
Trailforks Introduces Paid Trailforks Pro Option
I posted this on MTBR but I figure it's more likely to be read by the TF people if I post here. After sitting with this for a day, I've reached some conclusions. First, TF really boned the implementation of this pay for pro thing. There was almost no warning that this was coming. I learned about it when I opened trailforks on my ride yesterday and suddenly the app wouldn't work unless I paid them money. I figured out how to set the free area and was able to get going, but still, implementing this with zero warning to users was pretty stupid. Second, the fact that TF made what was originally a free service into a pay service without adding anything is really a poor marketing tactic. It should have been very apparent to anyone planning this that there would be an immediate negative reaction. This ties into the first conclusion - there should have been a better plan with more lead time before springing this on users. Third, $18 a year is actually a very good deal for this, and something I am definitely willing to pay. I am concerned that a lot of volunteers are no longer going to contribute, and that will diminish the usefulness of the app over time, but if that happens then I can always cancel. But I would hope TF is very aware of the danger here and does something to encourage participation (credit toward subscriptions, for instance). Fourth, the biggest concern I have is what is in store in the future. Is trailforks going to get bought by garmin or someone else who makes more changes? Is the price going to be increased over time? Will we end up having to shell out $20 a month for this down the road? Who knows, but again, I guess when the time comes I can always bail. So I guess for now my conclusion is that I'm going to pay for the subscription. But I don't really feel that good about it, and it's largely because TF screwed up the implementation. Reading the forums, there are many who seem to feel this way. The damage done to TF's goodwill may diminish over time, but it could also make TF very vulnerable to a competitor in the near term. One final thing - if I could make one suggestion to TF on how to proceed from this point forward, it would be that TF should make all user-submitted data available for free on the app. That means the ability to browse any map content submitted by users and what people have posted about those trails (descriptions, difficulty level, etc). Then require a pro subscription for using GPS location, map overlays/topo, recording, ride logs, profile leaderboards, etc. I imagine most who would be willing to pay would do so just to get GPS navigation. But allowing the user-submitted data to still be accessible to all for free on the app would go a long way toward mollifying the bitter taste left in many of our mouths from the way this was done.