by mzed
Views: 26,253    Faves: 116    Comments: 24
It's been over a year since Joey Gough asked whether I would be interested in making an edit involving a trio of female racers. She went on to say that although they all specialised in different disciplines, they really enjoy shredding trails together. I was certain that Joey would be a great subject, but when she mentioned Katy Curd and Manon Carpenter, I knew it was about to get interesting. 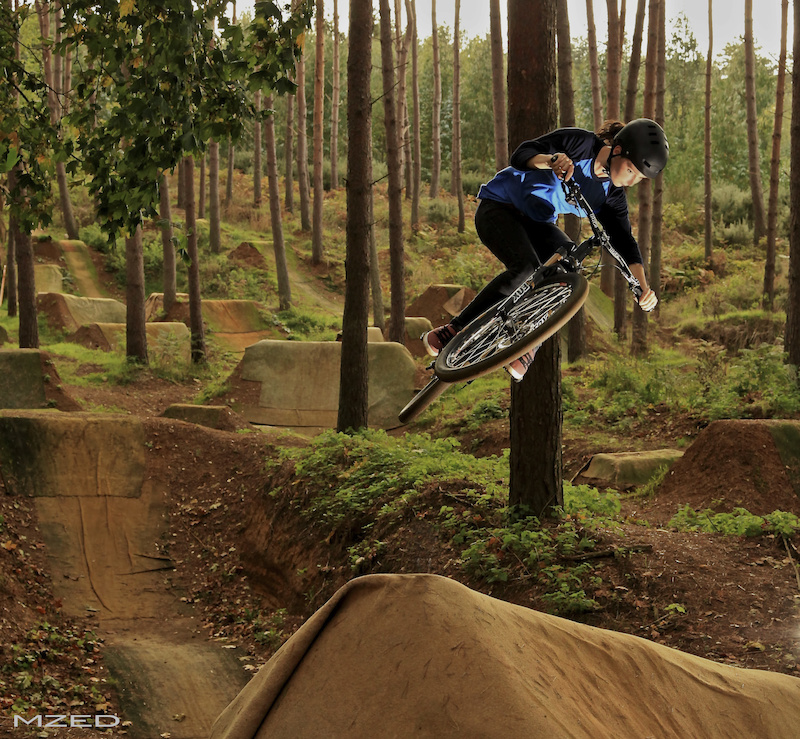 The greatest challenge was finding time to shoot amongst everyone’s busy schedules (and Manon’s frequent exotic holidays). I thought introducing each rider individually, riding something relevant to their main discipline without the pressure of racing would be a good start.Time was limited, we were restricted to one shoot per rider and a group shoot at some trails, needless to say it was tight! Working with riders can be like herding cats, but the level of professionalism and stamina exhibited by the girls was truly remarkable. 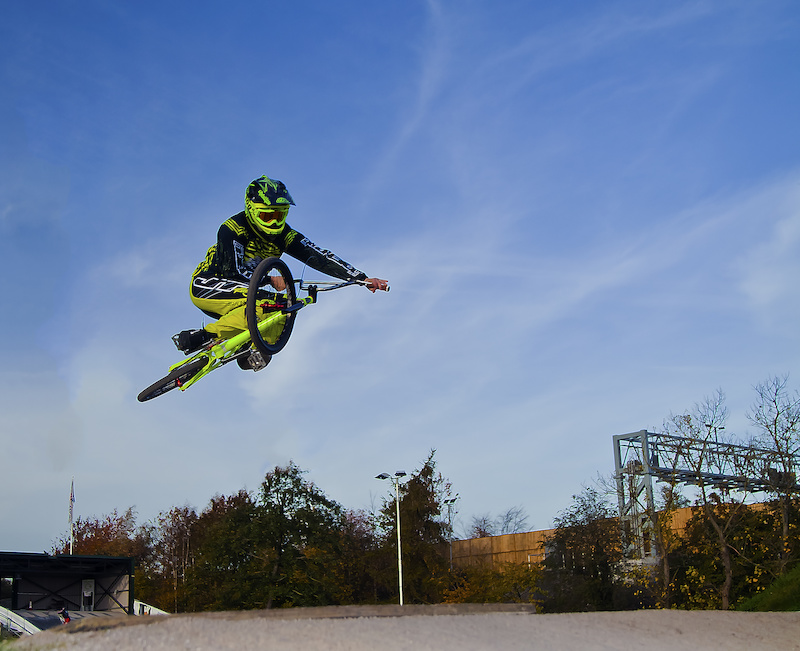 Joey decided to shoot at the Birmngham BMX track, there were a few things I wasn’t quite prepared for. Firstly, was the sheer scale of the place! Secondly, how accommodating the Birmingham BMX club guys were (thank you Mark Sleigh) and last of all, Joey’s domination of the track. I actually sh!t myself a few times on close takes 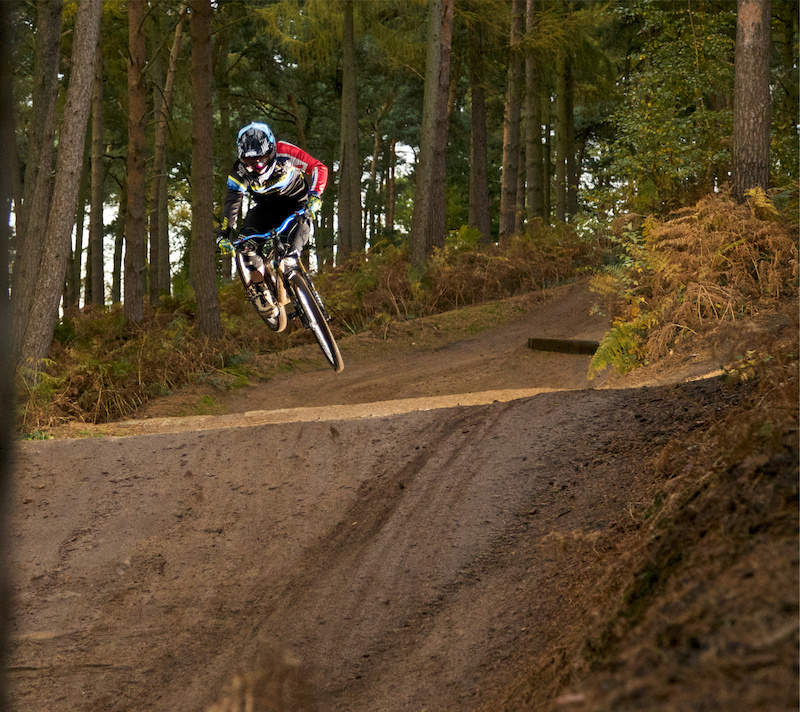 Katy's shoot took place at Chicksands bikepark 4X, we were running late due to both individually being pulled over by the fuzz, my experience was a little more comical than Katy’s, when I absentmindedly told the police "I'm off to shoot some riders," their response was interesting to say the least, luckily the misunderstanding was quickly clarified and their were laughs all round, Katy’s fine wasn’t funny though. We started shooting almost as soon as Katy arrived, without much of a warm up, we set to work and Katy ran take after take like a machine, her stamina really was remarkable, even when I was fading and I could see that fatigue was kicking in, she didn’t stop until the light was gone. 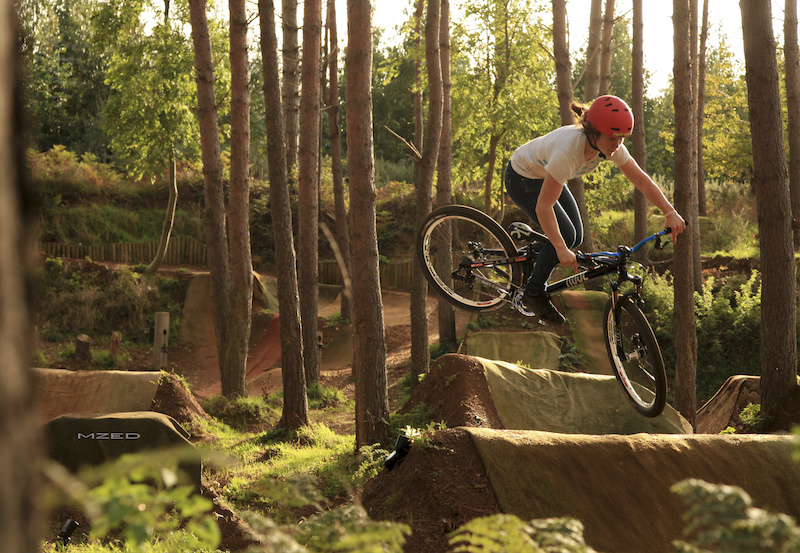 Deciding on a location for Manon's shoot was a little more difficult, due to the fact that Manon seems to have had recent shoots at every decent location on the planet. The night before the shoot we sat around discussing locations with Jason, and in typical parent/offspring fashion, I thought that Manon was going to go postal at some of Jason's remarks. Eventually the decision was made to shoot at a relatively natural, secret trail which Manon described as “The trail she misses most when away from home.” She said it’s the first trail she likes to hit when she returns from a season of racing. In the morn we gathered a skeleton kit of equipment and started to scale what felt like Everest with the amount of kit we were lugging, eventually when we reached our starting point, Manon said she didn’t want to warm up as she said she’d like to film each line with a undisturbed surface, well, she hit each line, faultlessly, first go, although my filming wasn’t as successful so often multiple takes were required, the shoot was over before we knew it as the light faded like someone had hit a switch. 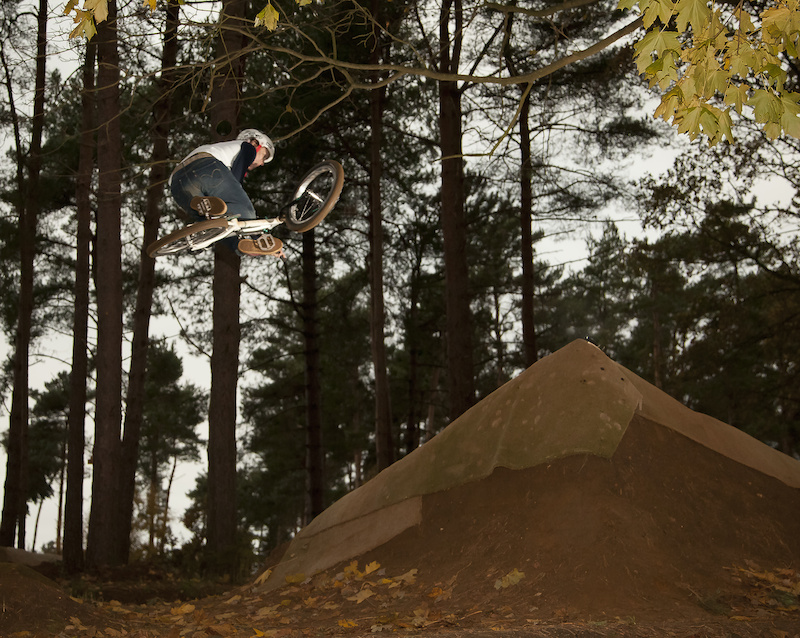 The location chosen for the dirt jump sequence had me worried, Neither Katy nor Manon had ever ridden there before, I knew some of the lines were really tricky (and intimidating) I needn’t have worried, before I had the chance to set up my kit, all three riders were flowing through the sets effortlessly. Everyone worked really hard to capture as much footage as possible from the limited time we had. The best thing was, that it was obvious that everybody was having a blast, the laughter and banter was infectious, and Jesse Greaves had everyone in stitches on a number of occasions.

We would like to give a special thanks to all the crew from the secret DJ trails for agreeing to let us shoot at their epic spot! These guys are some of the finest trail builders on the planet.
Bob Coxage, Ian Newson, Neil Steinle, Fred Newton, Gav Mitchell, Will Smith,Tom Keeble, Matt Thompson, Mark Bell, Lozzi Laurence, Big Russ, Bexx, Bee and Monty, apologies for anyone I may have missed.

And PLEASE! If you are lucky enough to know the location of these trails KEEP IT TO YOURSELF!

I would also like to thank Tom Dowie from Chicksands Bike park, Mark Sleigh from Birmingham BMX club and Lynette, Jason and Manon Carpenter for being so welcoming and hospitable.

triggstar (Dec 23, 2013 at 1:50)
I second that slamman,my girlfriend is just getting into riding and when I show her a vid of more girls riding it gives her a boost. Manon Katy and joey have made truly inspiring video hear for girls coming into the sport.

thepwnstar39 (Dec 23, 2013 at 21:05)
This is so awesome! I have been waiting for this kind of steeze and bike control from a ladies video for a while, these girls are totally shredding! Casey Brown's little Whistler video and this video are serious game changers for women's MTB. Keep it up!

pencapchew (Dec 24, 2013 at 5:32)
superb vid. Great to see girls really going for it and looking so smooth in the process. Really well shot edit, we need films like this to keep people like my girlfriend stoked about the sport and something to aspire to!

mzed (Dec 25, 2013 at 9:44)
Thank you, I genuinely appreciate your comment, I hope the edit has had a positive influence on your partner!

munro3 (Dec 27, 2013 at 17:48)
It seems like one of the largest differences between men’s and women’s athletic styles (in all sports) is body language. Women tend to be more rigid and structured in their approach. It’s awesome to see a trio of women who are all aggressive, strong, smooth, and use a lot of body language in the corners and in the air. An edit like this speaks volumes about the talent of female riders, and is inspiring to everyone. Props to the riders and the film crew – this is fantastic – and we need more of it.

iambexx (Dec 31, 2013 at 2:15)
I can't stop watching this video Martin - Your film work is just awesome as always! Such a quick snappy vid. As a rookie girl rider, it's so inspirational to watch some girls in on the action shreddin' as well as these ladies do, especially that last section when they are riding our home away from home.

mzed (Dec 31, 2013 at 2:57)
I often question the purpose/validity of the edits I make, but when I receive comments such as yours, it's all the justification I need. Thanks Bexx!

Discojoe (Dec 23, 2013 at 12:35)
GUTTED I HATE TO LOVE SECRET LOCATIONS but it happens for a reason that last place is immense for that reason

That right there is someone who knows what's up.

iamamodel (Dec 25, 2013 at 12:42)
I was thinking more about how if the trail is untouched then her roost marks would stand out. And it would show she didn't practice the line over and over. Yes, I race.

alanmandel (Dec 25, 2013 at 20:08)
its encouraging to see girls killing it in the sport I wish more women would get into the sport!

Kieran-Young (Dec 23, 2013 at 3:11)
Why in all these edits do they HAVE to involve dirt jumps? They get so boring. Like I'd be totally interested if it were top dirt jumpers but no, their just as good as most normal people riding at those jumps...Bring on the negative props.

Kieran-Young (Dec 23, 2013 at 4:00) (Below Threshold)
Because it'd be pretty stupid to make an ill-informed comment. There's a thing called freedom of speech you know...

missjoeygough (Dec 23, 2013 at 4:33)
So I while in the hospital canteen last week, there were school children singing christmas carols. I'm not really into christmas, so I just walked on by. Funny enough, I didn't feel the need to go up to them after they were done and say " hey kids, You're pretty average compared to the top performers these days, so why do you have to bother singing?". because firstly, other people enjoyed their performance and secondly, it would just be plain rude and pointless.

Equally, I prefer to watch edits of average riders flowing trails and having a good time than I do watching pros flip whipping every other set. But I don't question why the edits of top riders are made or slate them, becuase not every edit is made for me. Neither is every edit made for you. If you don't like something, you can just walk on by.

The internets a funny place...

gavlaa (Dec 23, 2013 at 5:20)
Brilliant response- you have a career in politics when you hang up the goggles. It made me chuckle that you say you're not that into Christmas... all these men saying how chicks that ride are so cool... I think you're cool because you're able to see that Xmas is a load of commercialized crap!!! Ha ha. I wish my Mrs shared your opinion! Great edit MZ- hope the girls are stoked with your efforts. Catch you both soon.

missjoeygough (Dec 23, 2013 at 6:17)
Me and Scoobs have an xmas free house! I'm just bitter that we gotta take 2 days off work and not get to ride... Cancel xmas and have 2 more summer bank holidays instead I say! haha