$20 GBP
Selling this Maxxis Crossmark, 29" x 2.25" It's in good condition, with very little wear to the tread and no damage to the casing. Air retention on my wheel was excellent. There's some tubeless residue as normal, not a huge amount It's the 60tpi model with EXO casing I've moved to some tanwalls so clearing this out I'll include UK postage for the £20 Thanks

$23 GBP
Selling this Maxxis Minion Semi-slick, 29" x 2.3" It's in good condition, with relatively little wear to the tread, and no damage to the casing. Air retention on my wheel was excellent. There's a fair bit of tubeless residue as normal -- see pictures It's the EXO Silkworm version, so has a bead-to-bead protection layer (and it's an aftermarket tyre, so with yellow Maxxis logos) I've moved to some tanwalls so clearing this out I'll include UK postage for the £23 Thanks

$18 GBP
Selling this Maxxis Rekon, 29" x 2.6" It's in decent condition, with at a guess about 60-70% of the tread remaining. There's no damage to the casing and air retention on my wheel was as good as I've had on a tubeless set-up. There's a fair bit of tubeless residue as normal -- see pictures It's the dual compound, 60tpi model with EXO casing (and aftermarket, so with a yellow Maxxis logo) I've moved to some tanwalls so clearing this out I'll include UK postage for the £18 Thanks 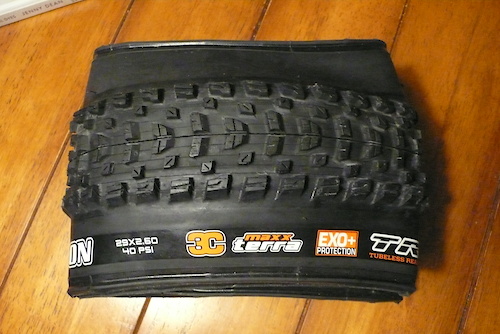 $36 GBP
Selling this Maxxis Rekon, 29" x 2.6" It's been fitted, but never ridden It's the top model, with the toughest EXO+ casing and 3C Maxxterra triple compound (and aftermarket, so with a yellow Maxxis logo) I'm also pretty sure it's the newer and improved EXO+ casing, see here: https://www.pinkbike.com/news/maxxis-updates-exo-plus-tire-construction.html I bought it as a spare a while ago, but looks like I won't use it I'll include UK postage for the £36 Thanks

$550 GBP
For sale is my custom built rigid XC bike, built around a 2012 Kona Unit frame (medium; 18") I picked it up as a full bike late last year, and it was barely used (still on the original tyres, which were hardly worn). I then changed almost everything, resulting in the bike pictured, which I've ridden only a handful of times I used a mix of new and used (but good condition) parts: the wheels, tyres, brake rotors, lower headset cup, chainring, and chain were all new, and the brakes were as good as new It's either a tough gravel bike, or light XC bike, depending on how you look at it. And if you wanted a proper MTB build, it'll take a 29 x 2.25" rear and 29 x 3.0" front tyre Reason for sale: I had a part-time job lined up abroad and intended to leave one of my bikes over there with work (I built this up to leave in the UK). However, Brexit bureaucracy meant my contract fell through, so I've ended up with an extra bike and no good justification for it... I'm in Leeds, and don't want to post, but would be willing to drive a reasonable difference to meet up I'll also accept offers, and could potentially do it cheaper if I could keep hold of some of the nicer parts, like the Thomson stem and rotors More details on spec: > Kona Unit 2012 frame, steel, 135mm QR single speed dropouts, 1 1/8th headtube, 27.2mm post. Excellent condition, paintwork barely marked. Only thing to mention is that the rear dropouts are a little tight; perhaps this was common back in the QR rear end days (specially with steel frames), and I've just forgotten > Exotic Carbon forks, 15mm thru axle. Great condition, barely marked. > Superstar wheels, V6 UK made hubs, with Isotope rims (29mm internal width; I used a paint pen to stealth out the logos, and some rubbing alcohol will reveal them again if preferred). Barely used, so dead straight and no dings, and spinning freely. The freehub bearings are a bit tight though: potentially they are still bedding in, I don't know. However, there's no play and the engagement is spot on > Hutchinson Tundra tyres, 700c, hardskin bead-to-bead protection, set up tubeless. Listed at 45mm width, but are oversized and measure 50mm on these rims > Raceface Aeffect cranks, barely used Shimano BB (XT I think), Superstar 36t oval chainring, and 17t On One single speed sprocket > Cheap but effective Tektro hydraulic brakes, with nice two-piece, blue, A2Z 180mm rotors > Thomson 90mm stem; basic Cube inline seatpost > Shimano spd's, the 520s I think. Bit rusty but spin and engage fine > Original seat, handlebar & lock-on grips, and I'll include the original stem & seatpost

$55 GBP
I've a set of Shimano brakes for sale, the front is an SLX (M7000) the rear a Deore (M6000) Owned from new by me, they're in good condition with no damage to the calipers or levers But they are probably due a bleed, as I've only ever given them a simple air bubble release at the lever. The bite point is still quite solid (not spongy), but it's come a little too far towards the bars for my liking The pads are OK, they look well under 50% worn Hose lengths are 78cm front and 135mm rear (perhaps a little longer on the rear, hard to measure) Looking for £55 posted for the pair, or happy to split them
Load more...
60,001 views