seccitaj mikekazimer's article
Aug 30, 2018 at 0:34
Aug 30, 2018
Video Interview: Leo Kokkonen, Pole Bicycles' Founder
@pakleni: Apparently the post I was referring was old, it was just somehow at the top of the timeline. So my bad, i stand corrected – they are not actively designing / planning carbon frame :P 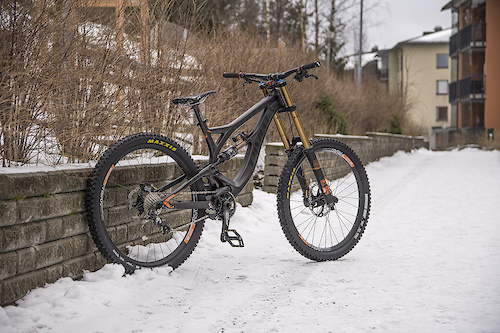 seccitaj mikekazimer's article
Jul 7, 2018 at 12:13
Jul 7, 2018
Bike Check: Bernard Kerr's Pivot Phoenix DH - Val di Sole World Cup DH 2018
What is that front fender? (I know, definately the most vital part in his build) Liking the looks of it compared to the marshguards etc.

seccitaj paulaston's article
Dec 3, 2017 at 23:58
Dec 3, 2017
Pole Bicycles Announces New CNC-Machined 'Machine' - Press Release
@Socket: The shape of the top tube is totally different between the video and the 3D model. The finish of the frame is totally different in the 3d render compared to what is described the final finish to be in the actual press release (and is present in the video). There is a difference in the chainstay shape as well. And as you most likely as a designer realize, even slightest differences in overall lines or shapes of a product can change it's overall shape quite a bit. In this case, the top tube is not even close to being similar. The prototype's top top tube is OVERLY curved, where as that problem has magically disappeared in the 3D render. The obvious difference is also in a such a prominent location, that it changes the whole outlook of the frame drastically. I am not being overly aggressive about their product, i work as a creative in advertising agency. So i know a thing or two about selling things to people - and we constantly face the issue about what is considered basically lying, what is immoral etc. Our every day client would get executed from using marketing assets that are so far from the truth - not to mention accepting pre-sales based on those. It just makes me generally disgusted that they are utilizing a strategy like this in trying not to only hype their product, but actually SELL their product! As a proud Finn i would be more than glad to see Pole succeed in any way possible, but i just see a lot of dodgy shit with how this frame / bike is released - not to mention the wannabe-eco-backstory of their's (let's not even get into it really here). And looking at this thread, i am not the only one being skeptic here. All in all, i think they should have just used all this to purely create hype. Selling bikes based on the information available here is just where i think they crossed the line. Even Leo himself said the final bike is basically not going to be either of the ones here, but something "more along the lines of the 3d picture".

seccitaj paulaston's article
Dec 1, 2017 at 3:36
Dec 1, 2017
Pole Bicycles Announces New CNC-Machined 'Machine' - Press Release
@Socket: I am well aware of that. My issue was that there were no reference to the fact that the bike in the video is different to what the 3D-rendered image is. Nor was it made clear which one is the final frame. Now it even seems that neither of them is the final product, so i find it quite immoral to market and pre-sale a product with images and a video, that might not even represent the final product. On the very least, it should be made absolutely clear that the ones pre-ordering the bike might not get either one of the bike frames shown in this article / their website. If someone is to throw 3500 euros or so at them, they should the very least know and see what they will be getting with the money - instead of a raw prototype and (what seems like) an idealistic 3d-rendered picture of the bike.

seccitaj paulaston's article
Nov 26, 2017 at 2:28
Nov 26, 2017
Pole Bicycles Announces New CNC-Machined 'Machine' - Press Release
Is the frame present in the photos an early prototype, or is there some other reason that the frame in photos looks ugly as fuck (especially from the super-overly-curved toptube area), where as the frame in the 3d-rendered image, well not definately great nor sexy, but not ugly-as-fuck-level either? In case they are both presenting the final product, i would suggest you re-model the 3D-rendering to more closely match what the frame actually looks like, because if you will use that to market the final product (as shown in the photos), i'd say that's almost like actually shipping a different product alltogether :D