Join Pinkbike  Login
Timed training doesn't count. Except at World Champs, where actually it still doesn't, but it's all we get! No qualies, no points and not even a seeding to juggle the starting order... The TT on the penultimate day is the only show of cards we're allowed. So while nothing may have changed and riders inevitably gave differing amounts of effort of whatever reasons, there are still morsels of clue on offer as to who might be about to go the distance and stomp the golden run of their lives.

After an early morning training that began before the sun even breached the mountains, riders took to one severely beaten up, gloopy track that was, perhaps counter-intuitively, in much worse shape than under the heavy downpours of yesterday. This afternoon Rachel Atherton hammered the women's field in this 'non-competition' by a shade off 20 entire seconds and Greg Minnaar, the repeat dark-horse winner that he is, set the fastest time of the day at 4:49, just 0.15 ahead of 'local boy', Thirion. With the course visibly drying before rider's eyes with every turn, we could be looking at a very different animal tomorrow, but of course one no less exciting. World Champs 2015 are here, they are now and set to be off the chain, in quite possibly more ways than one... 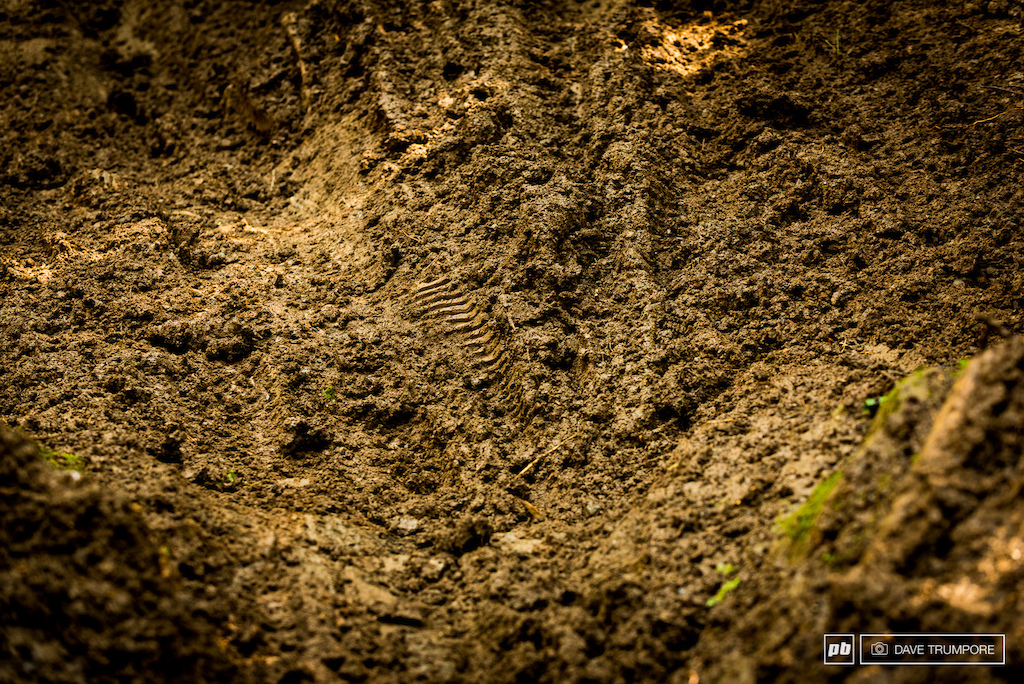 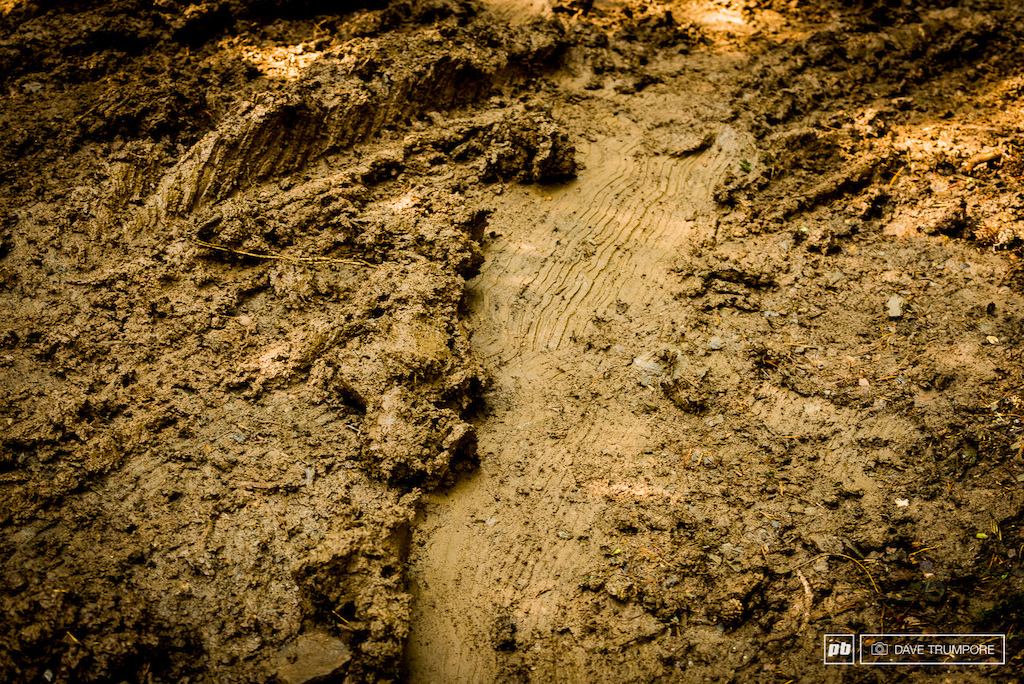 As the sun came out the conditions in the woods began to deteriorate rapidly. After two straight days of rain the sun is going to make the track far worse before it makes it better. 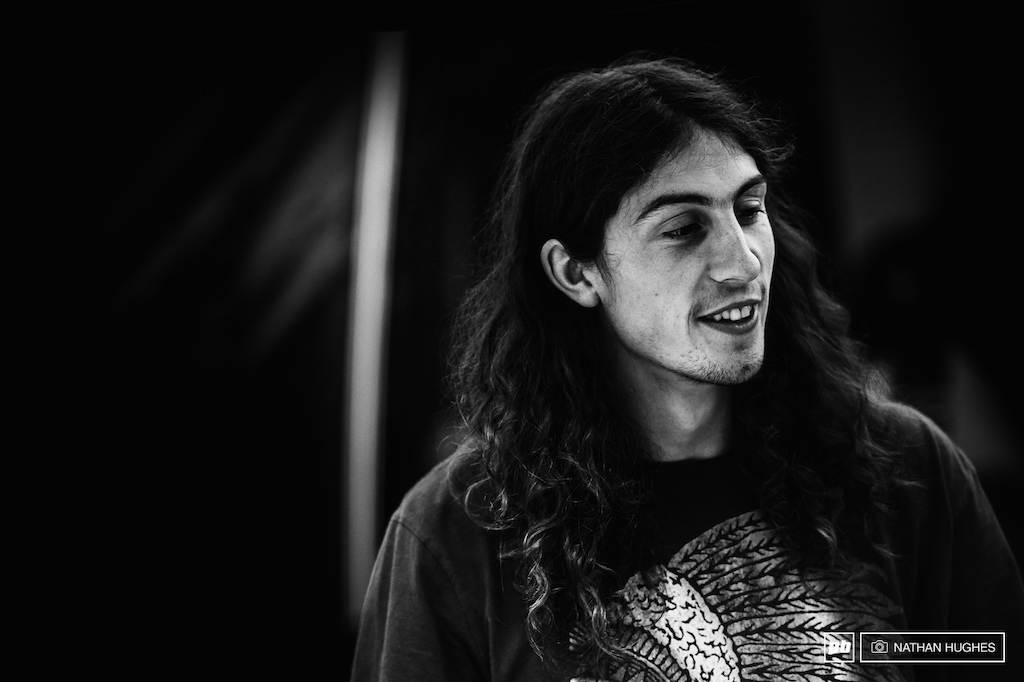 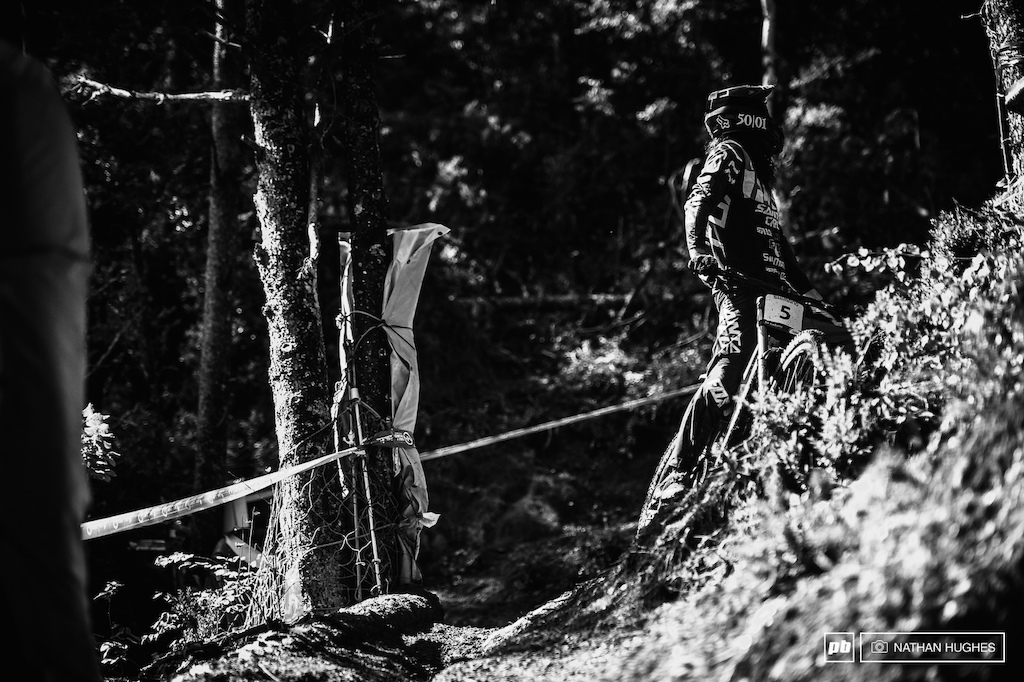 The odds of Ratty snatching gold are surely greater than 50:01. 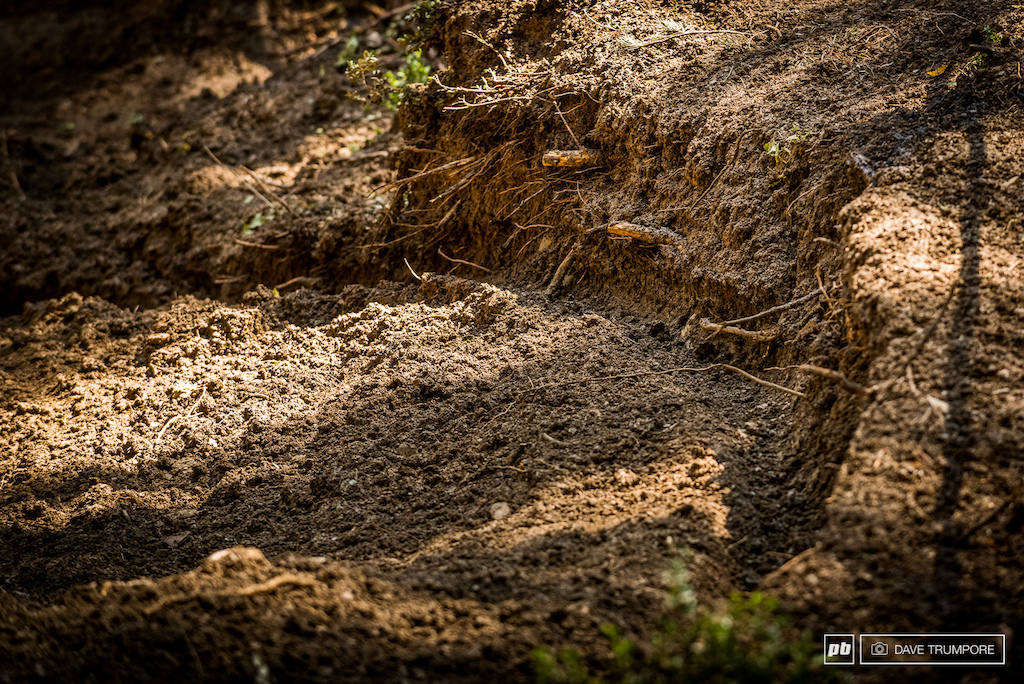 Who needs bike park berms when you can just make your own. 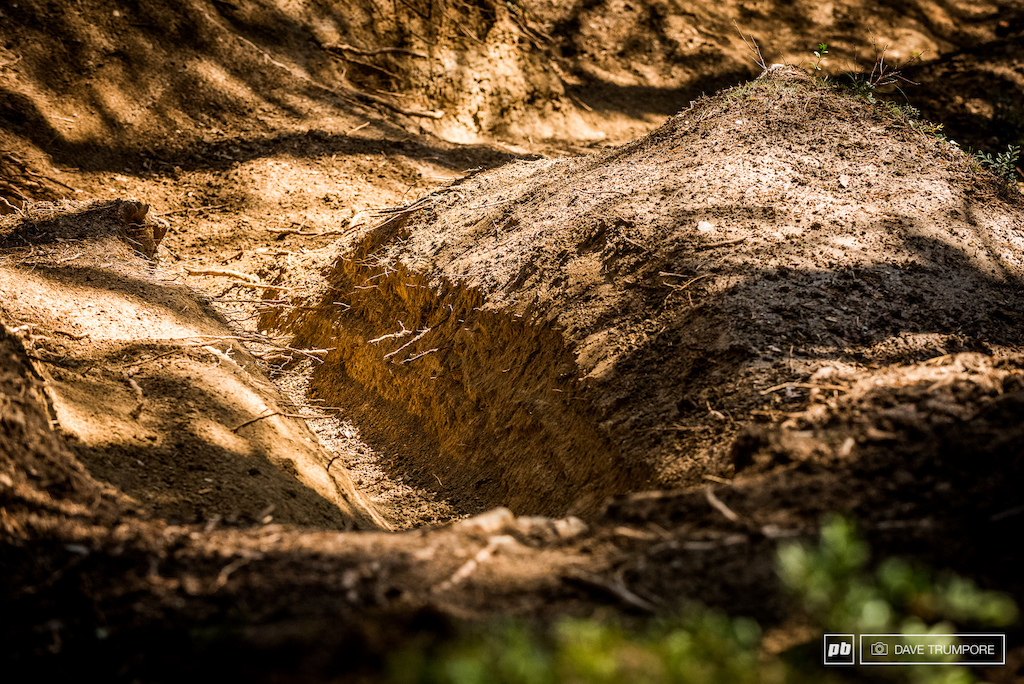 The line around this pedal dragging rut is not for the faint of heart, requiring riders to gap into the bottom of the corner that leads to one of the steepest parts of the track. 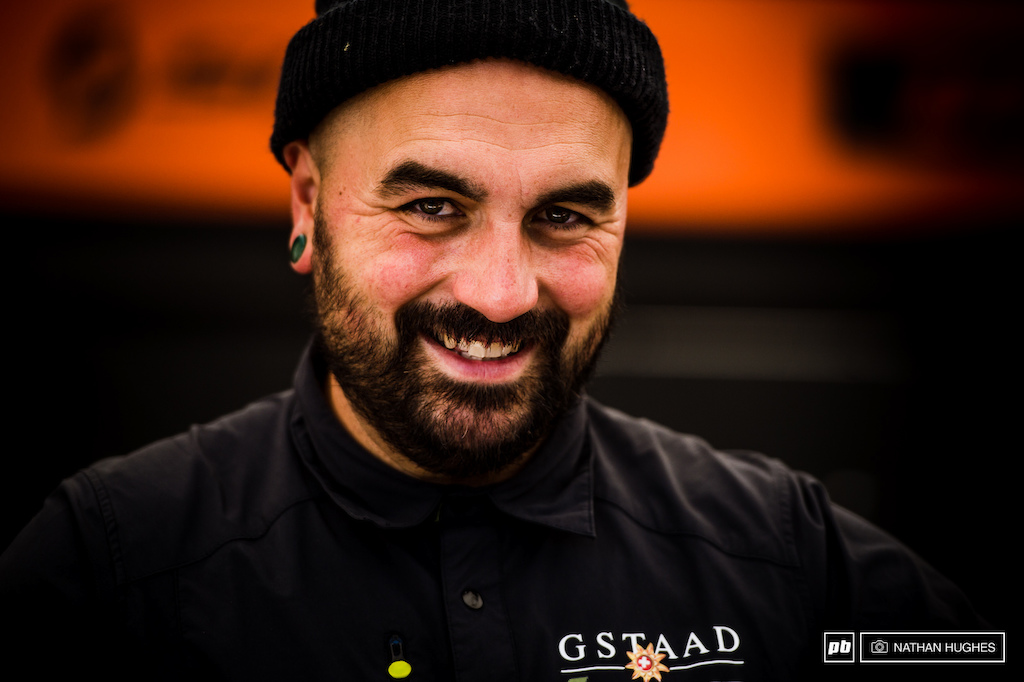 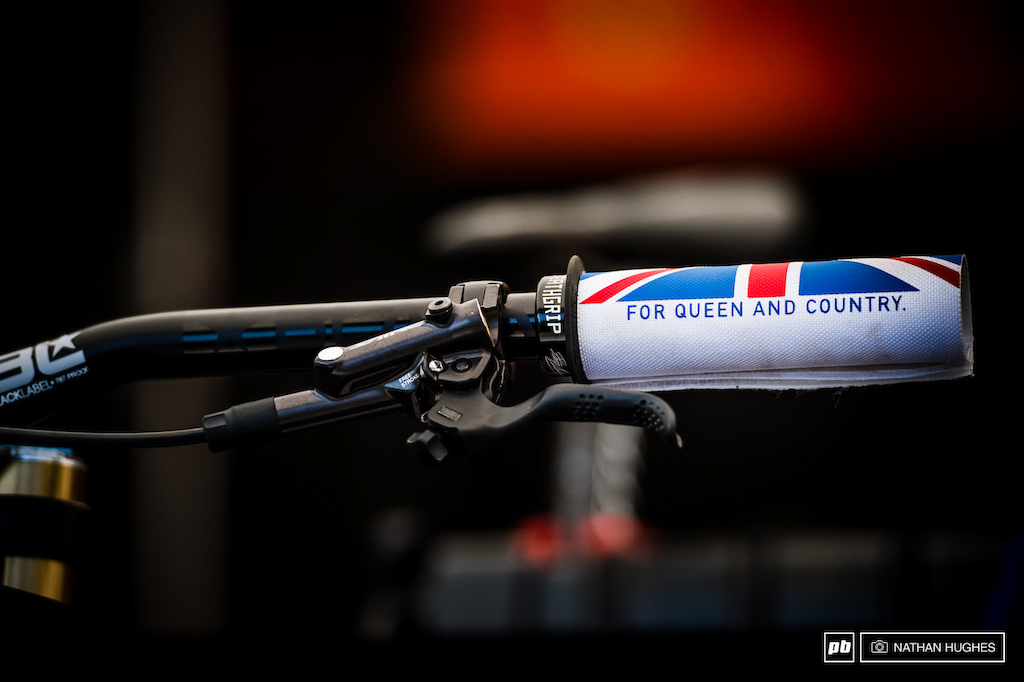 ...and Her Majesty. Tomorrow it's on.

Nathan Hughes • Age: 28 • Years Shooting: 2
Nathan Hughes was snared as mainstay Pinbike media crew for the 2013 World Cup season and has been trapped behind the lens and the keyboard ever since. In between the biggest bike events of the year Nathan can be found on client shoots, making far-off travel stories and trying to catch a moment to spin the pedals himself. A great appreciation of the wilderness, the fear of a normal life and the quest for the perfect picture will have him hooked and looking to raise the bar for years to come.

Dave Trumpore • Age: 35 • Years Shooting: 4
Dave spent the bulk of the past 17 years racing professionally before realizing that despite qualifying for the random World Cup final here and there, the next generation was just way too fast and way more talented. Upon hanging up his racing boots in 2010, it would be a few years until Dave picked up a camera and started shooting the odd race here and there as a way to stay in touch with all the friends he had made over the years, and the rest as they say is history. In just a few years time his photos have graced the pages of just about every MTB magazine and major media outlet, while his commercial client list includes a who's who of the cycling industry, and he is lucky enough to shoot regularly with some of the best riders on the planet. Currently at Pinkbike, Dave shoots the Downhill WC and the Enduro World Series as well as contributing to the occasional editorial story.

Stranger-Danger (Sep 5, 2015 at 16:03)
There are a lot of people in full-on racing pajamas. Even the Geeman was wearing DH pants, and snaps of Gee in DH pants are harder to come by than snaps of his sister in a mini-skirt.

polarproton (Sep 6, 2015 at 3:00)
@Stranger-Danger Still way easier than spotting Greg on a bike without a short!

ajayflex (Sep 5, 2015 at 21:57)
Gwin 6th with a crash, and he spoke with such humility. Absolute champion in every aspect of the sport. As an Aussie, I'm hoping Troy, Hill, or Fearon take it out, but if Gwin wins as expected, it couldnt go to a more deserving rider. Mucho respecto.

GNARbikeparkUK (Sep 5, 2015 at 15:01)
Great to see all these awesome photos. Makes up for being stuck here and not being able to be there in person.....would love to spectate in the woods at this race!

feds (Sep 5, 2015 at 15:19)
Amazing. Love the insight from the riders, the photos, and the tidbits of knowledge that PB picks up and passes on to us. So incredible to prepare to watch an event like this –from across the world– and feel like I know the cue-sheets for Warner and Claudio in the box who are actually there. Thanks Pinkbike!

ouchy (Sep 5, 2015 at 16:40)
Good to hear that the course is drying out. Looked like it would be a bit of a bust with all that gloppy shit. I like mud but when it slows riders down i'm not so keen.

fattyheadshok (Sep 7, 2015 at 5:37)
What's up with hating on Gee?? He's serious about his sport. So what? I wish my family was as high functioning as the Athertons. It's obvious that they work hard and that they all love each other. Something wrong with that??

tetopluz (Sep 5, 2015 at 15:54)
Those are not grips, they are just velcro grip protection for mud and water while the bike is in the uplift and before the run or race so the grips will be dry and clean

felimocl (Sep 5, 2015 at 14:52)
That Scott's rear linkage is going be bad problem, imagine all the mud that will get trapped in it thus affecting the shocks performance. Makes sense in my head anyway

ReformedRoadie (Sep 5, 2015 at 16:26)
Except for the fact the track is drying out and should be quite different come race time.