The Cass Lagoon loop has a notorious reputation as one of the most difficult mountain biking routes in Canterbury. Long hike-a-bike sections and stunted gnarled subalpine beech forest, exposed roots, stream beds, and rock gardens make the challenging factor high. Plus, late last year a big rain event had come through and wiped the lower section through Cass stream on this, the Cass-Lagoon Saddle Track in the Craigieburn Forest Park. Because of this, we chose to hike to the Ridgeline above the Craigieburn ski area and drop into Cass saddle via over 500m vertical of chunky steep scree. The climb involved a steady hour from the valley floor, on the access road plus another two hours of mostly pushing on a steep 4x4 track and then carrying the upper part of the ski area to the ridge.

The scree was significantly chunkier than the previous time I had descended it, not the creamy cut your way through ball bearing type, but instead patches of bigger baseball-sized rocks that instantly brought you to a stop, making you fall sideways on the sharp rocks. 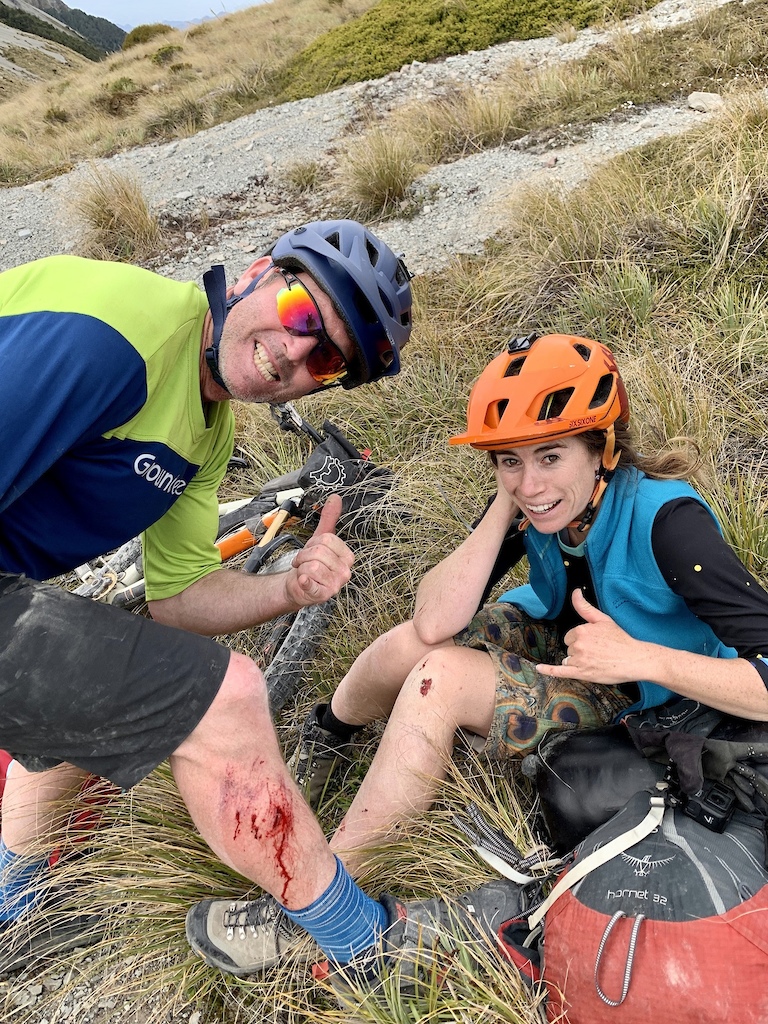 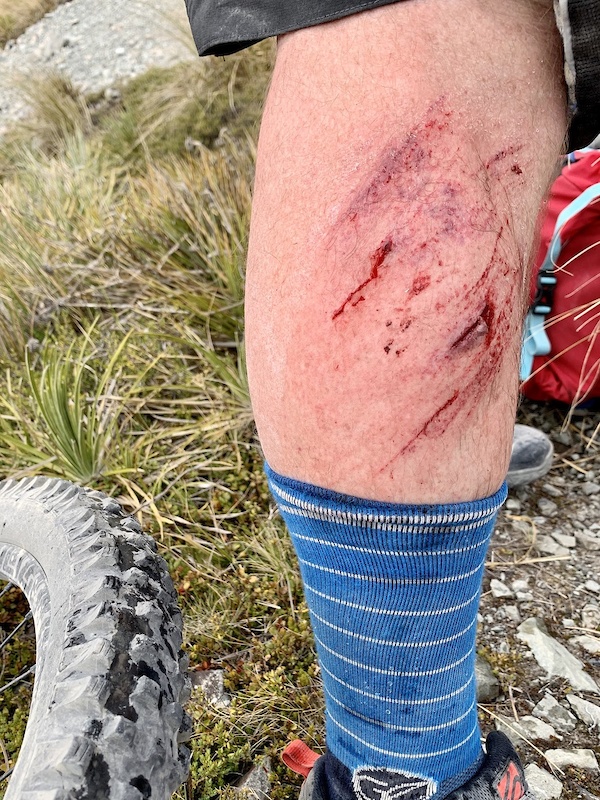 Who would have thought knee pads would be required for bikepacking.

Once at the saddle we commenced licking our scree wounds and preparing ourselves for the descent to Hamilton’s Hut. Unrideable steep in only a few short pitches this section is oh so good and gets better as the sound of the stream grows. The palatial Hamilton Hut has 20 bunks and it’s pretty popular with the Te Araroa walkers (the trail from top to bottom of NZ). Is was full to the gunnels on this night so Rod and I took our mattresses out to the woodshed and made comfy. 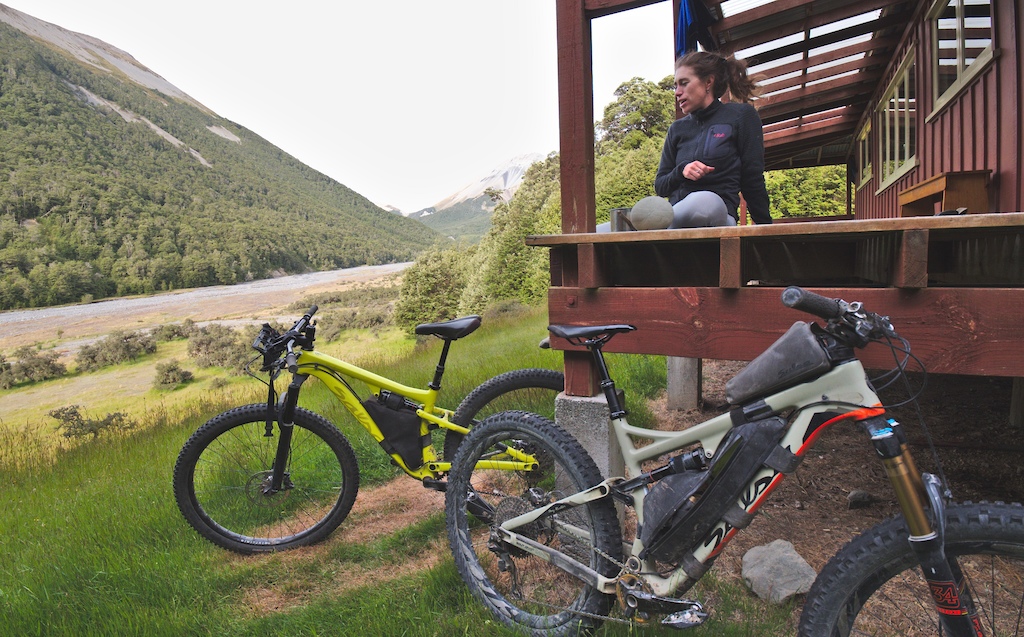 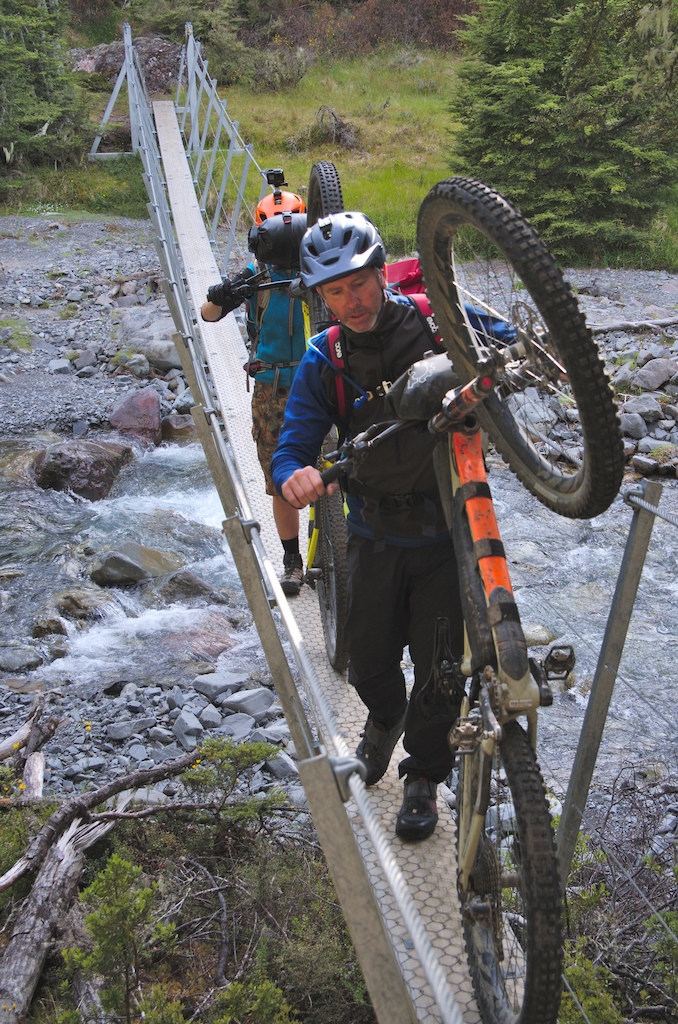 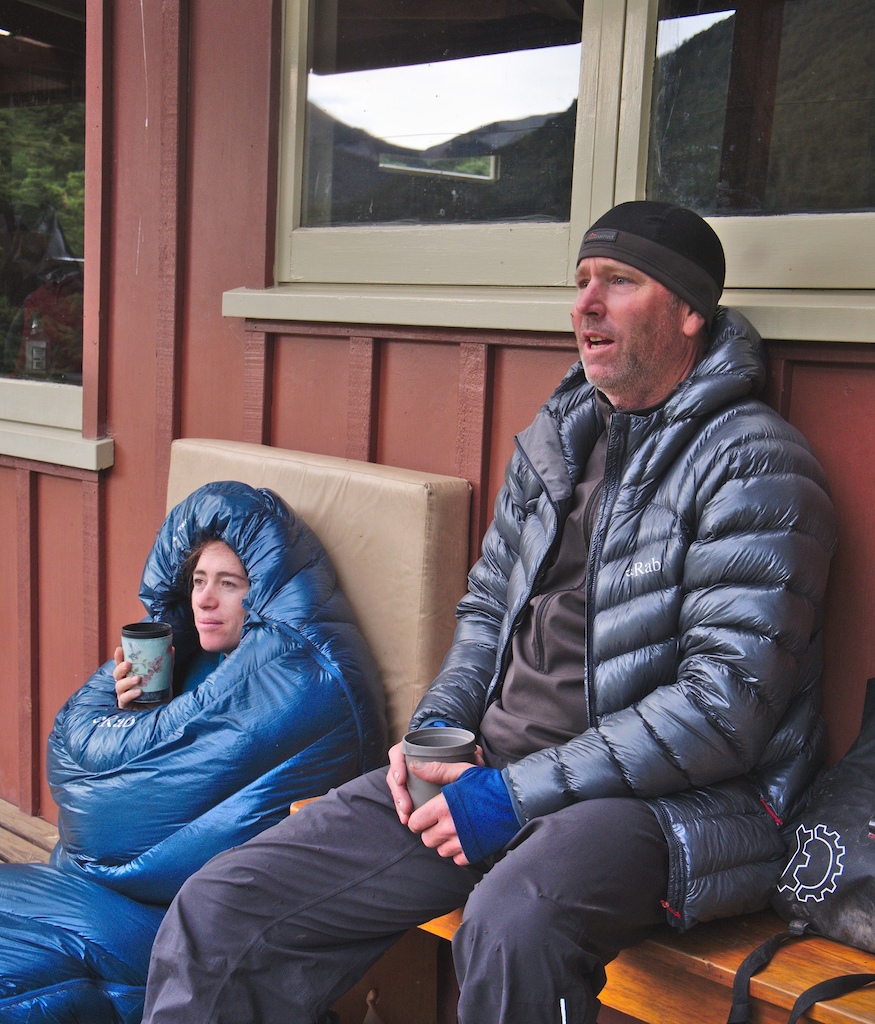 Knowing we had the more epic sections to come on day two, we ripped into it nice and early. Some flowy sections gave way to mostly mank for two hours. The old West Harper hut was a welcome site. Built in 1957, some of the beech log framing looked original. We collapsed on the long grass outside, ate some food trying to lighten the load for the push to the lagoon saddle A-Frame hut. 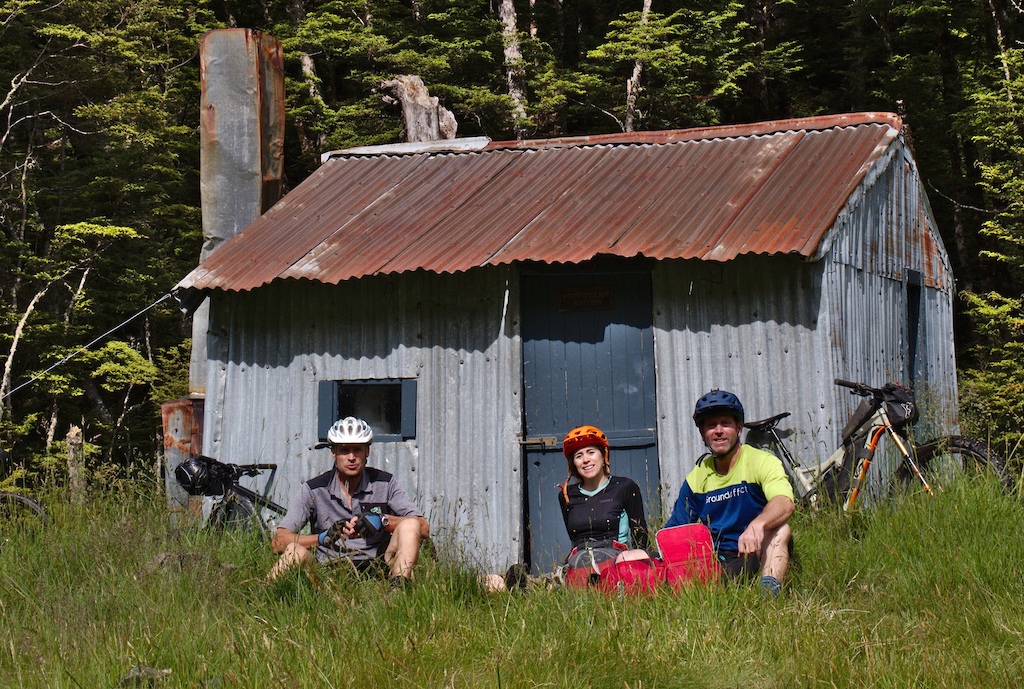 It was tough going climbing out of the bushy valley a mix of riding little gems and shouldering the bike up narrow bush tracks constantly bashing the wheels or getting wedged. Another couple of hours saw the crazy witches cap looking two bunk A-Frame shelter come into view. A well-deserved feed was consumed before we soldiered on to the saddle proper where the wind chill was obviously coming off the glaciated peaks of the main divide. We donned jackets for the descent to the road end, it started off sweet but quickly turned into gnarly rocky mank w sizeable drop-offs and the odd short hike. When we returned to the shelter of the forest the technical riding continued to within a few hundred metres of the waiting shuttle vehicle.

All up it was a 7 hour day on the first day and close to nine on the second. It was hard graft with equal quantities of hiking to biking but the rideable sections were sublime. This is the upper level of backcountry bikepacking... Right up my alley but not everyone’s.

Rose rode a Salsa Deadwood 29x2.6 I was on a Salsa Pony Rustler 27.5x2.8 and Rod was on his Giant Reign. Rose and I both had down wear (jacket/and sleeping bag) from Rab. My riding apparel is from Ground Effect. Rod and Rose used the Salsa Anything Cradle on their handlebar. Both Rose and I have custom frame bags. I carried an InReach Mini for emergency satellite communication.

The video was predominantly shot on a Lumix GH5 with 8-18mm and 12-60mm lenses, GoPro Hero 7 black for POV and my first attempt at aerials with the amazing little DJI Mavic Mini.

Footnote:
This is the first time I’ve put a disclaimer on a video, this is to discourage folk from thinking this is an easy overnighter. It’s not. This sort of riding does have an impact on the environment and this needs to be considered, watch the video until the end for more information. Look after the backcountry. Peace out.

Jagungal (Feb 8, 2020 at 0:19)
Queenstown and Wanaka get all the press, but I keep wanting to go back to the Cragieburns. The boulders, the co-op ski fields, the trails through the beech forests. An alpine playground.

metaam (Feb 9, 2020 at 0:13)
I was there about 10 days ago, loved it, techy, rooty wheels on the ground riding. Unfortunately a savage wind blew up overnight so I bailed on the planned second day. Oh well, something to look forward to for next year.

sspiff (Feb 8, 2020 at 8:20)
Weird message: Check out our awesome Alpine bike packing trip but don't do it because it destroys the scree fields and puts the rest of the environment at risk.

DirtbagMatt (Feb 8, 2020 at 12:53)
If you read the complete footnote at end of vid he explains his main point which is to identify if your chosen route is a worn and trampled established path (Good), or fresh area and vegetation (Bad). Anywho... it’s a little gray.

olyfungi (Feb 8, 2020 at 8:56)
Visited South Island in late February 2019 to race TransNZ. Craigieburn trails were my favorite days (day1&2), even though day2 was cut short a little. Snow and rain put a damper (literally) on some people’s fun, but coming from winter it was a familiar situation. The rawness of the trails out there was exactly the kind of experience it was looking for. For those on the 2020 roster, hope you have a blast!

I guess sponsors expect advertising, so there’s that.

Craigeburn (Feb 9, 2020 at 23:57)
Have done Cass Lagoon as day trip both directions several times - it’s epic. There will be some carrying - going light is good. But the steep decent from Cass saddle is definitely rideable the whole way (maybe not if it’s wet) and one of the main reasons I like to go back.

notthatfast (Feb 8, 2020 at 0:10)
Oh man I miss NZ... Amazing looking adventure. Wish I got into the backcountry a little more while I was there!