The idea for this shot came 2 years ago when Vittorio Brumotti and I visited this location for a Smith shoot. Vittorio is a crazy man, and warned me only the day before departure. When we were inspecting the location, I saw that huge rock and said: "Can't go up there now! That will take some organizing later". So, we ended up with a different shot and planned to come back with a larger crew.

More info inside,On May 18 2010, Victor, in collaboration with a staff of about 25 people (cameramen, mountain climbers, photographers, assistants, etc.) made our way back to set the Guinness World Record for the most consecutive bicycle back-wheel pogo hops with 71 rear wheel hops with security in place and 21 jumps without at 143 meters high! This event was possible thanks to the courage of Victor, his balls, and his sponsor Sector.

In Italy, Vittorio Brumotti is a real star. Years with his bicycle have managed to make him very popular! I've photographed with Vittorio some years and I've followed him on different expeditions. Takes major balls to do what he did! 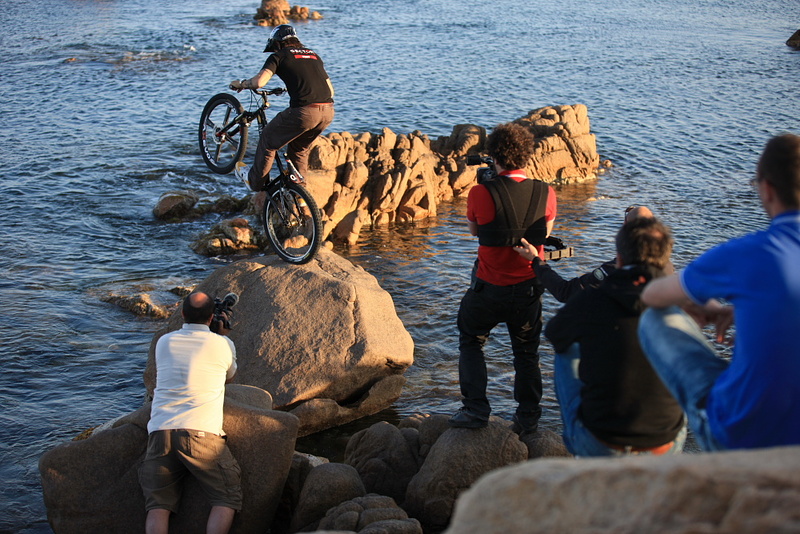 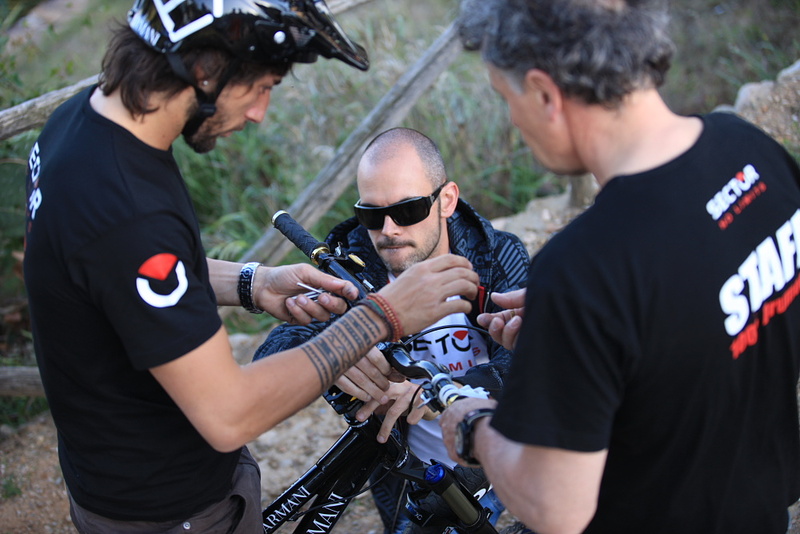 Vittorio getting bike ready for record 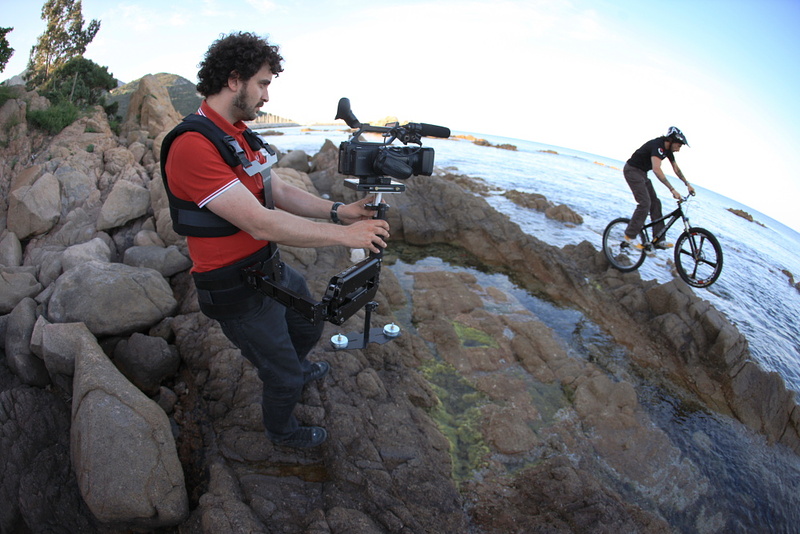 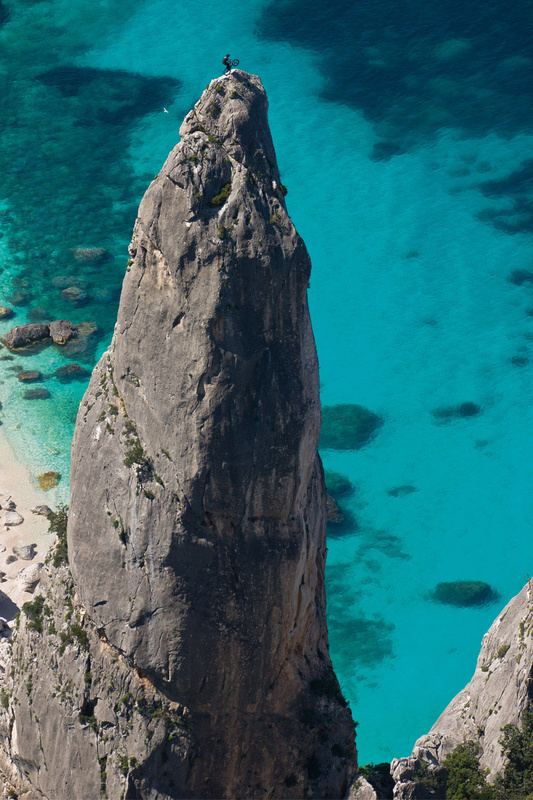 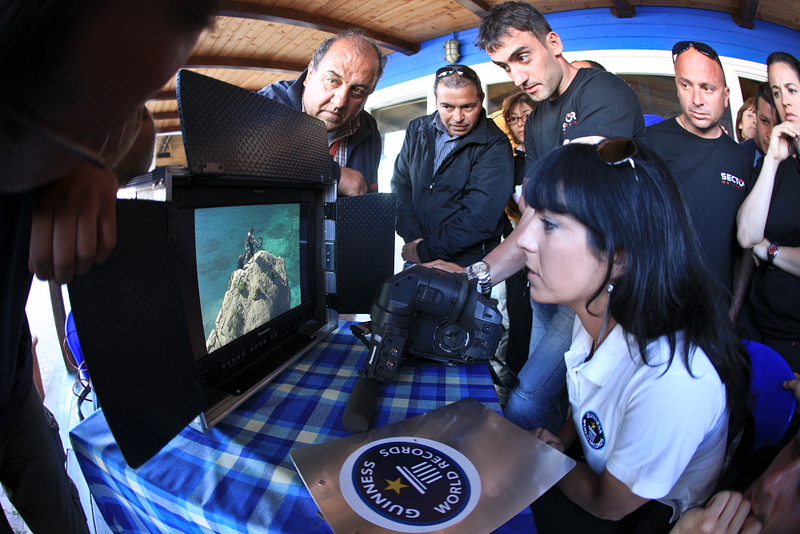 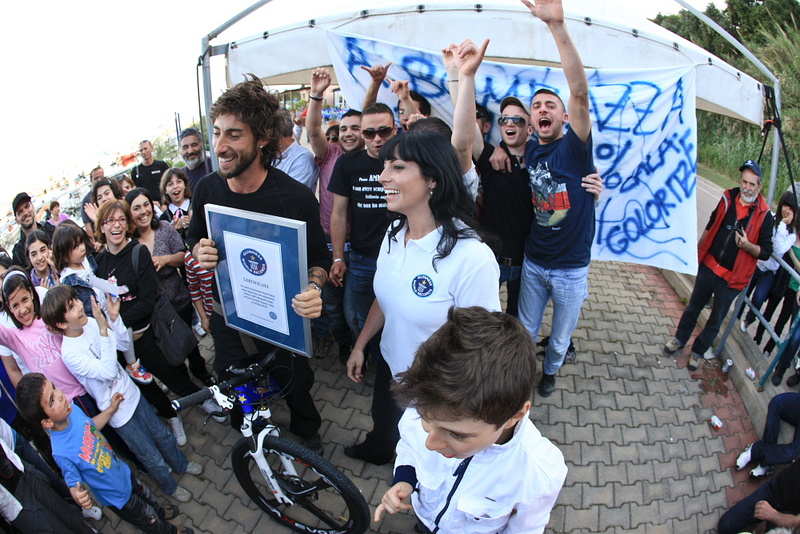 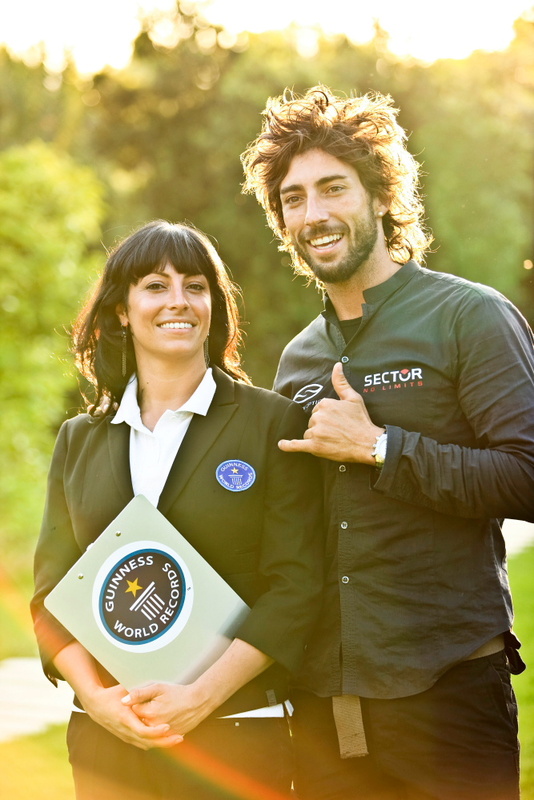 gazmataz (Jun 4, 2010 at 3:35)
Strong shout on the record and congrats to the man. The Guinness world record chick was nice but did you see the two at the end in leotards!? Man I'm liking the brunette on the right......... wooooooooo.

archi-magus (Jun 4, 2010 at 9:52)
Whenever I see mainstream TV from other countries I'm always amazed at how they embrace beauty (like scantily clad women) rather than being ashamed of it like most in the US.

godfried (Jun 4, 2010 at 5:36)
he probably can take only 80 days hopping around the world. by the way, he could have proposed to Lucia right at the moment when he received his certificate. Lucia is HOT HOT HOT!

sprockets (Jun 4, 2010 at 9:14)
DeChamp (not a trials rider) has moved past hopping on his rear wheel to more exciting endeavors.http://www.nitrocircus.com/ He would have probably done his 18 hops then base jumped off that rock.

creamsoda (Jun 4, 2010 at 9:34)
i don't get it. how was the previous record 18? any decent trials rider could beat that... why was that even listed as a record - simply because nobody told guinness otherwise?

also, what's the requirement on the hop? as long as the back wheel leaves the ground, it's considered 1 rep? or 1 inch? 2 inches?

reallybigmantis (Jun 4, 2010 at 12:58)
my homie did 25 the other day, but the reason the record was 18 was because it was the most witnessed by the guinness team officially. i've been waiting for a real trials rider to step up and set a real record

GTImkIV (Jun 4, 2010 at 10:20)
Good to see that international copyright laws are still in effect in Italy, lol. There is no way the cleared all those samples. Oh, and I guess that was cool stunt.

illy-d (Jun 4, 2010 at 10:49)
You mean the hair right? All of those Italian men have the sickest hair styles. Do I have to go all the way to Italy to find mousse with Extra Volume AND Extra Hold? Super Sick!!!