On One Parkwood LARGE

$650 GBP
This bike has been mainly used as my commuter so has seen nearly zero off road miles. However, it has seen some road miles in all conditions so the frame condition isn't like new. That said, it would probably polish up quite nicely if you put the time in and there are no rock chips, dents or significant scratches to speak of. It's recently had a brand new chain and cassette, the fork will not need servicing as it's barely been used on the road (and still works great). All other parts are in great condition. A while ago I bought a road bike for commuting so this has been sitting in my garage not being used. Spec is decent; Hope Hoops with ZTR Arches setup tubeless with Maxxis Tyres, Renthal bar uncut at 780mm, mainly Deore components with an XT rear mech. I can include the Crank Bros pedals if you want but unfortunately can't supply any flat or other type of clips. WILDCARD OFFER - You'll notice that this bike doesn't have a dropper post. I have a stealth reverb not doing anything so I'd be willing to get the frame drilled and install this for an extra cost if you like. Or if you'd like the reverb and do the drilling yourself then be my guest. We can come to an arrangement on price. I need the money so I'm not interested in trades. Would prefer local pick up but I can drive to meet someone as long as it's not too far. Just get in touch and we can discuss.

$2300 GBP
I bought this bike in spring 2016 for the sole purpose of taking it to the Alps in the summer, which I did. Since then I haven't even taken it out of the garage so it's time to sell it. Other than the couple of weeks in the Alps, the frame is pretty much brand new and I would describe it as in very good condition. There is a bit of cable and pedal rub here and there but the bearings all perfectly fine and the shock is a long way off being due a service. The forks have just had a lower leg service and new decals. No marks on the stanchions. The cranks have some wear on them but fully working with nice, smooth BB bearings. Both wheels/tyres set up tubeless. I'm only selling because I simply don't get enough use out of it to justify having it in the garage. It really is an excellent example of a well looked after downhill bike which would make an idea race bike or just something to take on the odd uplift day or trip to Europe. You won't be disappointed. A bit about the bike It rides very well on steep or very rough terrain, something I've found common in most bikes I've ridden with a VPP. The back wheel feels very planted in the turns and the whole bike is very responsive and reactive to your movements, allowing you to let the rear wheel drift out a little in a very controllable way. I found that it excelled at the faster, rougher tracks like Pila. Spec Frame: 2015 Intense 951 EVO (Large) Shock: Cane Creek Double Barrel with 500lb Ti spring (I have the original spring) Fork: 2015 Fox 40 Float Rear wheel: Hope Tech DH on Pro 4 hub Rear tyre: Specialized Butcher Front wheel: Hope Tech Enduro Front tyre: Maxxis Minion 2.5 3C (brand new) Handlebar: Renthal 780mm uncut (I think it's a 20mm rise) Grips: ODI Ruffian Stem: Renthal Brakes: Shimano Saint (203mm front, 185mm rear) Shifter: Shimano Saint Rear Mech: Shimano Zee (ghetto 7 speed setup) Pedals: Battered old Mallets which you're welcome to but I don't have any flats to put on I'm afraid Cranks: Shimano Zee 165mm Chainring: Renthal 36t Chain guide: e13 LG1 Saddle: Pro Atherton Seatpost: No idea!

russclark Nico-T's article
Jan 21, 2017 at 23:36
Jan 21, 2017
A Muddy Good British Trail Ride - Video
Is there any chance you could dictate that into some sort of audio book for me? I'd like to be able replay it when I'm feeling really down. Thanks.

$650 GBP
This frame has done well over the few years I've owned it. It's capable of anything and handles like a dream. I've looked after it but it has plenty of cosmetic marks. I've recently replaced the bearings and the shock could do with a service. With these imperfections in mind, I'm open to offers on price but please take into consideration the Angleset and CCDB. This bike made it into the Dirt 100 but on the condition that you reduce the head angle with an Angleset and I couldn't agree more. Having ridden for a time with the steeper head angle, it's safe to say the bike really comes to life with the slacker front end. Stock head angle is 67.5 degrees and I think the Angleset takes is down to something like 66 although I can't be sure without measuring. The overall geometry is a little shorter than most large frames with around 150mm travel. I'm 6'1" and found it fine as you tend to ride off the back a little more with the VPP anyway. However, if you're used to a medium and prefer a longer bike then this will be perfect. I ran my 150mm travel Reverb a good few inches out of the frame. Just don't bother with this size if you're any taller than me! If you don't mind waiting then I'll get the shock serviced for you and we can come to an agreement on overall price for that. I've tried to show all the main marks on the frame but please feel free to ask for more photos or to come round and have a look. 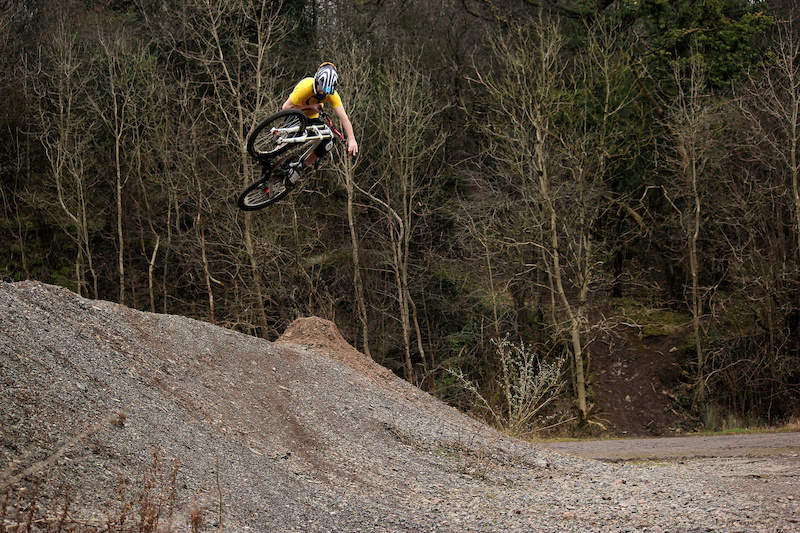