TomBasic mattwragg's article
Apr 30, 2020 at 22:39
Apr 30, 2020
Opinion: Ode to an Oddball - Rediscovering Two-Wheeled Fun
A little over a year ago I got a Trek Stache 29+ bike. I had a dirt jumper at the time and wanted something faster and more stable in the air. I originally was going to get a Yelli Screamy but then discovered the Stache with its uber-short chainstays. I lined up test rides for both in the same day. I loved the bigger wheels of the Yelli (my first 29er ride) but not the chainstay length. Then I rode the Stache and knew it was right within 20 seconds. On my Stache I can do about 70% of what I could on my dirt jumper, while my dirt jumper could only do about half of what my Stache can. It's slower than most bikes on the street, but once the pavement ends it's a force to be reckoned with. It is the most fun, most capable bike I've ever had. It's fast, and the wide tires give it so much margin for error it's comical. It's monster-truckish while being nimble. The only thing that's tempted me since is the 27.5+ format. My Stache and I are going to have a nice, long relationship.

This is the rotor I bought from georgi-g (Pinkbike user) in Baltimore, Maryland. The aluminum spider was bent, there was the quite visible crack as per this pic, and there were multiple edge deformations as if someone had tried to true the rotor with an adjustable wrench. Georgi was completely unapologetic and willing only to refund the price of the rotor, not the shipping. Had to open a dispute with PayPal, they decided in my favor and gave me a refund for the rotor and the original shipping. Lost a couple dollars to return the rotor to Georgi. Throughout it all he has been an utter pain to deal with and has never admitted fault or taken responsibility for selling a shit item.

$15 USD
This is a custom inner chainguide that I used on my Giant STP dirtjumper. It is an E13 bottom bracket ISCG mount that has pvc plates bolted to it. The problem with 1x chainguides is that they don't prevent the chain from popping off the bottom of the chainring. If you never backpedal it's not a problem. Otherwise.... Much simpler, lighter, cleaner than a full-on chainguide system but with a lot more security than a 1x guide. This worked very well and allowed me to securely run gears on my bike without any chain issues up front. This is designed for running a 32 tooth middle ring on a triple crankset. It requires a threaded bottom bracket to sandwich the E13 mount to the frame. You cannot run a granny ring. You can possibly run a middle and big ring with a front derailleur, but I only ever ran this with a single ring, up front. Price is firm, shipping is extra.

$120 USD
This is a 160mm fork with a straight 1 1/8" steerer (8 ½" length) with a 20mm axle. It does have a scratched left stanchion, but I sanded it and rode it for several months without any problems. Regardless, that side is the hydraulic cartridge side, which is isolated from the bath oil. So, any leakage would only be bath oil. The air spring is on the right side, and that stanchion is fine. Even so, I have replaced the oil seals with Enduro seals specifically for this sale (reused stock dust seals as Enduros were horrible to install, one actually ripped, and it's not a problem to reuse dust seals). It has a lot of cool adjustments: - Air pressure. - Toolless volume adjust for the air spring. - Rebound. - Micro TST: the compression damping can be dialed to various settings, and then that can be quickly switched fully on or off or any setting in-between. I epoxied a front fender tab to the fork brace. It can probably be unbolted if you want. The pictured plastic c things are barrel sections that can be clipped onto the air spring shaft to reduce travel (20mm each, fork does need to be disassembled in order to install). Please TEXT or PHONE at any time as I am not getting email notifications from Pinkbike. Or, please email me at tbasic1 at yahoo dot com.

$350 USD
This is the rare but still relevant Gruitr in great shape. No cracks or dents. There are scratches throughout the finish but no significant gouges. This was designed as a true do-it-all bike, with people running forks from 100mm all the way on up to 180mm and using the thing for XC to freeride and light downhill. Travel was stated as 4.5" - 5.5", but I believe that's with a 57mm travel shock. This bike comes with a 50mm shock, so when mounted in the upper hole the travel is about 3.5", and when mounted in the lower hole it's a little over 4.5". Basic geometry specs for this medium size frame are: Head Angle 68 deg (w/120mm travel fork, I believe) Top Tube Length 23" Seat Tube Angle 73 deg Seat tube length (center to end) 15.5" BB Height 13.5" CS length 16.5" This uses a 10x135mm rear hub and a 1 1/8" steer-tube fork. I previously had a 2009 Specialized Enduro SL (150mm of FSR/Horst Link travel), and this single-pivot Gruitr was better in every single scenario I used it. It climbed better, it descended better at speed (fast railing down fire roads), and it was more nimble and more poppy. Plus it's practically bullet-proof (I was relieved to get rid of my Enduro after having to replace the 14 or 16 bearings in the rear end PLUS the $70 bolt kit). This has been compared to other single-pivots like Santa Cruz Heckler, Orange Five, and Morewood whatever. I completely beg to differ. This one has the 16.5" chainstays. None of the others have chainstays that short, and it indeed makes a difference (if that's your thing; if you just like pedaling along and don't care about wheelies or popping off of stuff then it won't matter). Included: - Cane Creek S-3 headset. - Kalloy Uno SP-357 seatpost 27.2mm. - Hope seat post clamp. - Shimano SLX front derailleur (the proper one needed for this frame). - Shimano XT front shifter (release trigger broke and was replaced with a bic pen, which actually works better than originally). - Proprietary ISCG mount. - Fox RP-23 ProPedal rear shock 200x50 (weeped oil from the ProPedal lever but was otherwise fine when I used it several years, ago. However, I make no guarantees regarding the condition of the shock. It may need to be rebuilt. Hence I am including the Manitou, also.). - Fox Float volume adjust kit. - Cane Creek headset spacers for use inside shock for shortening travel. - Manitou Swinger 3 Way shock (190x50) (bought used, used briefly on the Enduro SL, worked fine with zero issues). Please TEXT or PHONE at any time as I am not getting email notifications from Pinkbike. Or, please email me at tbasic1 at yahoo dot com.

$1000 USD
These are new take-offs. They were installed on the bike with the tires mounted, were toodled around a couple times (but never saw dirt), and are now being sold. Specs: - Light Bicycle carbon fiber rims: 45mm internal width, 50.5mm external width (approx.). - DT Swiss 240S hubs: straight-pull spokes, Boost width (110mm front, 148mm rear), XD Driver cassette, 6-bolt disc mount. - DT Swiss butted spokes. - Brass nipples. - Front: 830 grams. - Rear: 935 grams. For comparison, the stock wheelset on the Trek Stache (using the Sun Ringle Duroc 50 rims) comes in at: - Front: 1095 grams. - Rear: 1230 grams. So, this wheelset shaves off 560 grams, or about 1 1/4 lbs. of rotating weight. These have been taped for tubeless setup but do not include the valve stems. 29er, 29er+, 29 plus Please TEXT or PHONE at any time as I am not getting email notifications from Pinkbike. Or, please email me at tbasic1 at yahoo dot com.

$18 USD
These are new take offs. Price includes shipping in the 48 contiguous states. These seem to be popular, as I'm receiving many offers for these. Please consider the following: - Cheapest I've seen these go for is $22 on Ebay. - Shipping via USPS for the contiguous 48 states appears to be $3.32. lockon, lock-on Please TEXT or PHONE at any time as I am not getting email notifications from Pinkbike. Or, please email me at tbasic1 at yahoo dot com.
Load more... 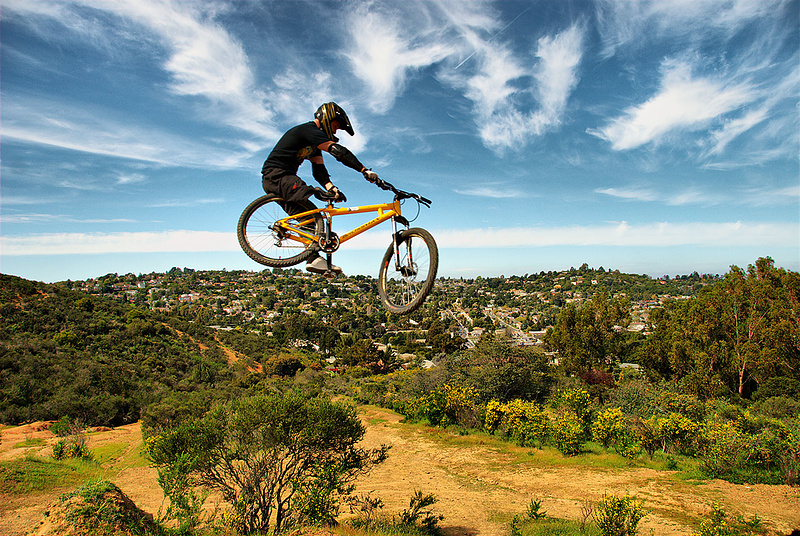