bicyclerider edspratt's article
Jan 5, 2021 at 15:19
Jan 5, 2021
Orbea's New Raw Carbon Finish Saves Up to 100 Grams
@jaame: Haha cheers man! I've been building more or less wild bikes for many years, but with those two xc bikes my builds started to get a lot of attention so now things are a little different of course with some support. But those two, the Genius and my alu Scale were fully paid for. Absolutely, some more than others but they all get properly ridden. I've taken xc bikes tot he bike park, raced and for example that World's Lightest Spark build survived the ABSA Cape Epic stage race under its new owner. While you can damage frames with the knife method for sure, cuts like that is nothing I worry about. It can happen quite easily on sharp corners/edges of frames but with a stiff knife blade and good technique you'd b e fine. As for that specific problem you describe I dare say that in most cases it's not about surface damage but over tightening. While a scratch isn't good and can lead to failure, in many places on a bike you so many layers of carbon that a very minor damage to the outer layer won't cause a failure. For example most frames are sanded quite a lot after they come out of the mold, so they sand through the outer layer in spots at the factory already. But especially lightweight handlebars and seat posts are sensitive to over tightening, an I've seen quite a few cases over the years.

bicyclerider edspratt's article
Jan 5, 2021 at 11:16
Jan 5, 2021
Orbea's New Raw Carbon Finish Saves Up to 100 Grams
@jaame: I use mostly knives when raw carbon is the goal and sanding for when I'm repainting. While I have a bit more support these days I've paid for several of the frames I've stripped in the past, for example the "World's Lightest" Scale SL and Spark SL builds.

Scott Spark? Never heard of it!

Stack heights and also reach actually are a little different. The black one is a size M with 120mm fork, red one is size M with 100mm fork and the white is size L (plus head tube modifications) with 120mm fork. Strange as that may seem, it was never a goal to have them identical geometry wise. On the contrary it felt like more fun to make them all feel like quite different bikes despite being based on the same frame model. That way they all have their strengths, weaknesses and personalities and I can pick the "right" one depending on what kind of ride I'm going on. :) 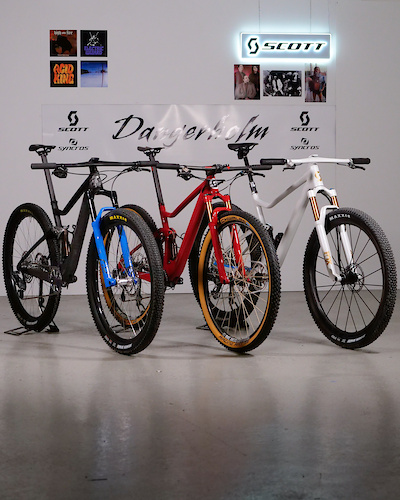 Some timing! Pretty much finished it today, just small things left like suspension settings, adding sealant and so on. Aiming for presentation in the second half of January.

bicyclerider mikelevy's article
Dec 8, 2020 at 16:45
Dec 8, 2020
First Look: Intend's New Inverted Fork Uses One and a Half Crowns
Pinkbike comment section every day: Bicycle brands suck for just taking baby steps, with just minor improvements for every new model. Pinkbike comment section when someone actually makes a big change to something: This is weird, I don't care that I haven't tried it and don't actually know if it's great - please give me back my security blanket and the small baby steps I'm comfortable with.