what bike is that? 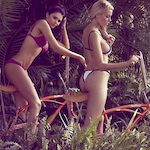 these seats seem big enough for some positions

frizstyler astonmtb's article
Jan 26, 2015 at 11:02
Jan 26, 2015
Radon Slide Carbon 9.0 - Review
What annoys me is,think about it,everyone now is outsourcing their products but they become pricier and pricier and end up more expensive than when they were local. this capitalist cartel has began sickening me and i have created antibodies to anything coming from "cheap" countries. there are jobless idiots today who buy phones with 80% clear profit to the manufacturer and they feel nice about it. is this the ideal corporate model? everybody make some money by outsourcing to asia? and then the whole country is in debt to asia? and if you dont make much profit you close everything swiftly and ok. but the investors got rich... shouldn't the bike industry be more sincere? are we bike people idiots?

frizstyler astonmtb's article
Jan 22, 2015 at 3:45
Jan 22, 2015
Radon Slide Carbon 9.0 - Review
and certainly comments about how a 3k euro bike is affordable dont help the situation. the companies move production to cheap countries and make huge profits while we are thankful to pay for their overpriced stuff. this bike's drivetrain is sold more than a japanese motorbike's transmission

frizstyler mikelevy's article
Jan 12, 2015 at 0:17
Jan 12, 2015
Pinkbike Awards: Suspension Product of the Year
yes come in all the rockshox fanboys,im wondering how much your asian tin cans are going to last! because no1 is lifetime! you will remember this when the warranty ends ,it miraculously breaks and then go buy yet another consumable product. but i will remember why fox costs more.

frizstyler RichardCunningham's article
Oct 19, 2014 at 12:14
Oct 19, 2014
Doing it Our Way: Trek Factory Visit
you thought i was calling the workers capitalists. WTF!! i meant the wages of the workers in contrast with the profits of the companies. Uniqueness of human being? Call me leftist but i dont think all humans are accountable for the injustice and the damage around the world. I'm not talking about myself ,i know i'm in a consumerist joke country too, but the laborers in Asia and the aboriginals ,and the tribes in africa dying by drought, what are they accountable for? They had no choice Simply asking for the bike companies to live up to their responsibility, since bike is the most viable vehicle we have.

frizstyler RichardCunningham's article
Oct 19, 2014 at 5:31
Oct 19, 2014
Doing it Our Way: Trek Factory Visit
the companies are based in taiwan but manufacture in china. not that i believe regulations are obeyed in taiwan. what a joke. how do they get out so cheap? yea and what about the wages the workers get and the huge profits the companies make, do you find that rightful? they make a frame with like 2% of the price they sell it. i suppose you know potentially how disastrous carbon manufacturing can be. all capitalists are dirty. Bike sector especially needs to get real. They sell their crap in the price of a japanese mx bike and idiots go buy it. At least make it in a first world country so you dont seem like a ruthless idiot
Load more...