Off to Switzerland again for Sharon and I. Our last trips to Switzerland in 2010 (Graubunden) and 2012 (Grindelwald and the eastern Valais) had shown us the complexity and diversity of this amazing country and its wonderfully welcoming people. This time we elected to use the same tried and true technique of focusing on a small region (Central and western Valais) and trying to find the good stuff in that region.

Our Sunday flight from Vancouver BC via Edelweiss Air means we arrive on a Monday afternoon and are efficiently transported via SBB from Zurich Airport and then to Brig 125kms south where we meet Martin of Alpine Trails and check into the Hotel Victoria. We were travelling with just luggage as we were provided with bikes/helmets by Alpine-Trails. For more on the logistics of getting around in Switzerland via its amazing public transportation system and the lack of need of a car rental see this other Pinkbike article


After a bit of time settling in and having a good nights sleep to get over jetlag we meet Martin at our hotel and we start our trip by getting on the Post-bus to Simplon Pass. For those who aren't familiar with Switzerland, their transportation system is beyond description. It's entirely possible to take a bus or train to many hiking or biking trailheads. Moreover transportation is exceptionally bike friendly and you can take your bikes on many modes of public transport although be aware that in busy summer months sometimes you must make arrangements in advance (informative post by Swiss Alpine Adventure about the logistics here). Fall months are not so busy so we never had issues getting a spot for us or our bikes. While it's possible to get around on your own particularly on a relatively uncomplicated trip like today's it's never a bad idea to have a local show you around. Alpine-trails is the consummate local and it was always a pleasure to have him not just show us the right directions but also the right time and the right combination of trails. 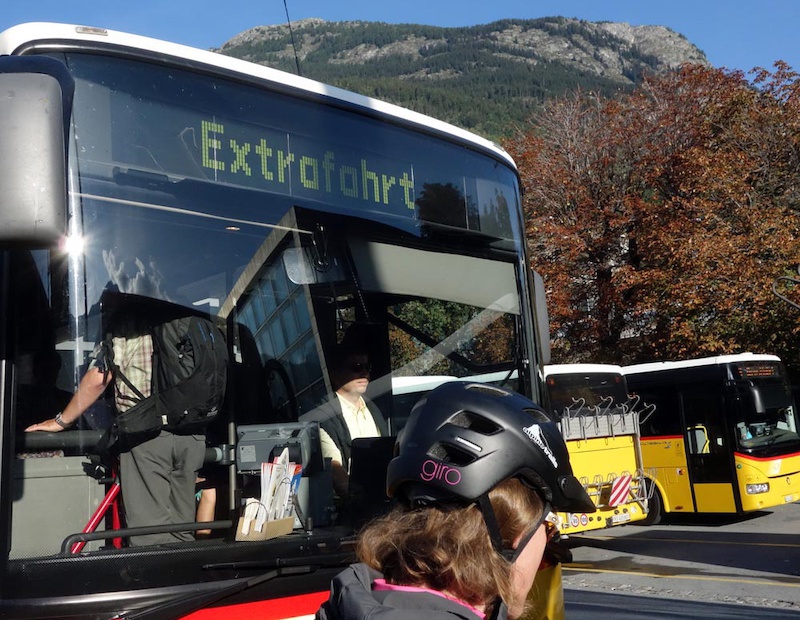 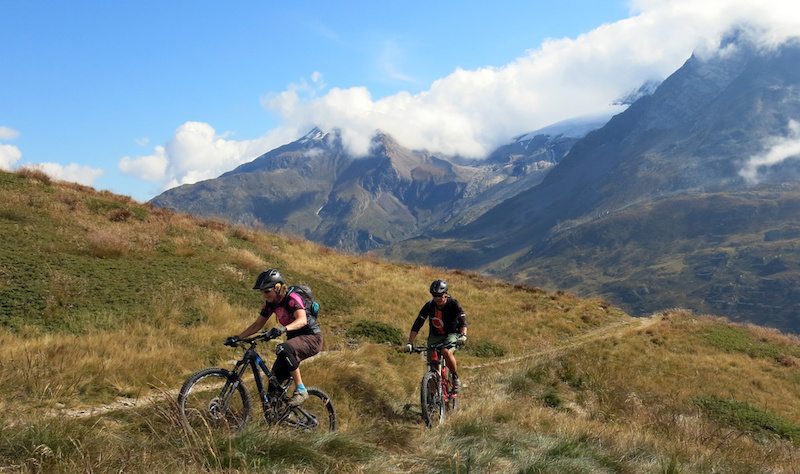 Climbing up from Simplon Pass


A bit of background here;Simplon was an old trail from Brig to Italy apparently used as early as the Stone Age and since the 1700's by smugglers and mercenaries (the Swiss had a reputation as superbly disciplined soldiers for the rest of Europe). The first road through the pass was built in Napoleon's time when Canada was still a young country. The first railway was punched through in the 1900's and the railway tunnel here is still (at 19km) the longest tunnel in the world taking users from Switzerland to Italy safely.

The Post Auto bus takes us from Brig at 670m to Simplon Pass 2005m.  We then climb to Bischtinupass which is another 350m or so.up from Simplon Pass. We are fortunate with weather and the views are stunning. Hikers join us on the trails and we co-exist splendidly as they cheer us on the climb. 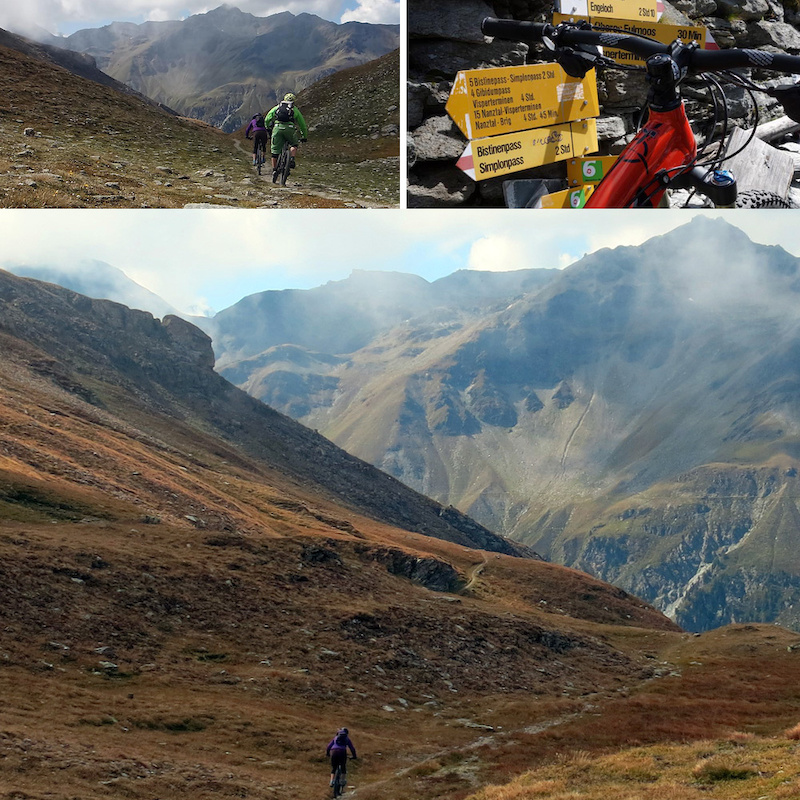 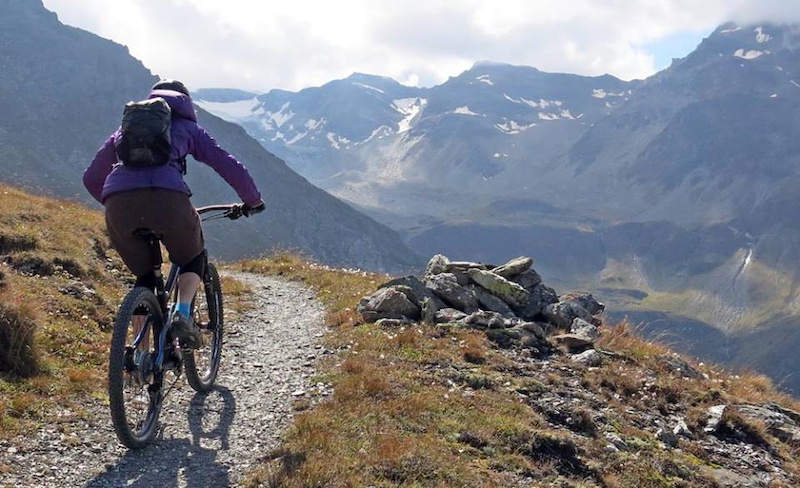 
It was nice to get the Postbus assist as our jet-lagged legs protested a bit getting in to the rhythm of trail riding. Although the first few climbing bits were tough especially at altitude, Martin proved to be patient and in no time we were on an alpine trail which basically held its elevation contouring this historic valley. We ride along the Nanztal valley towards the view of the Senggchuppa glacial moraine then back along multi-hundred year irrigation ditches/Suone/bisse.

The valley is a farming valley with benches built mainly to service the irrigation ditches. Place names are hardcore Swiss (Nidäralpa, Chluismatta, Sirvoltusattul, Visperterminen, Wyssboduhooru, Rossbodu, Egga - your challenge is to memorize the names then pronounce all of them!). Once you descend from the alpine there are many ways to get down through a healthy larch forest, some steep trails and some more gentle meanders. We passed up one alternative that allows you to drop down one side of the valley towards Visp and instead elected to descend quicker on trails and roads directly to Brig via a purpose built bike-trail by the side of the highway. Some trail options are at the Simplon Tourism website. 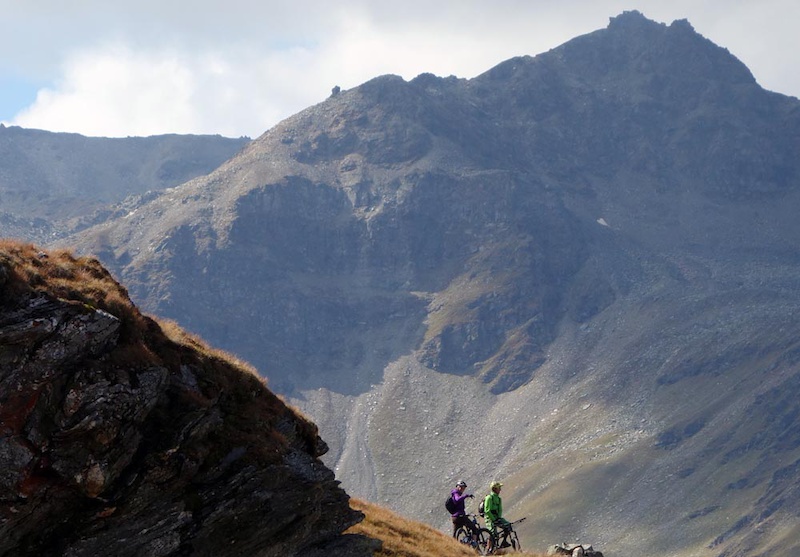 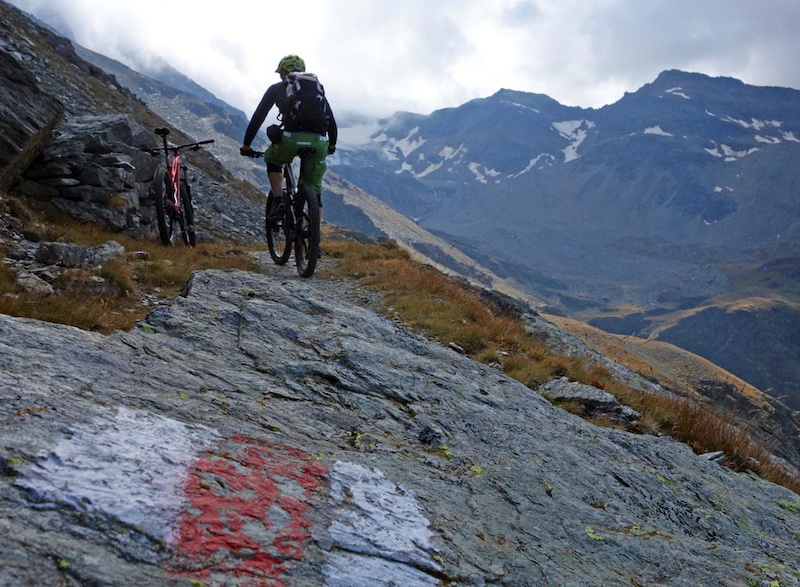 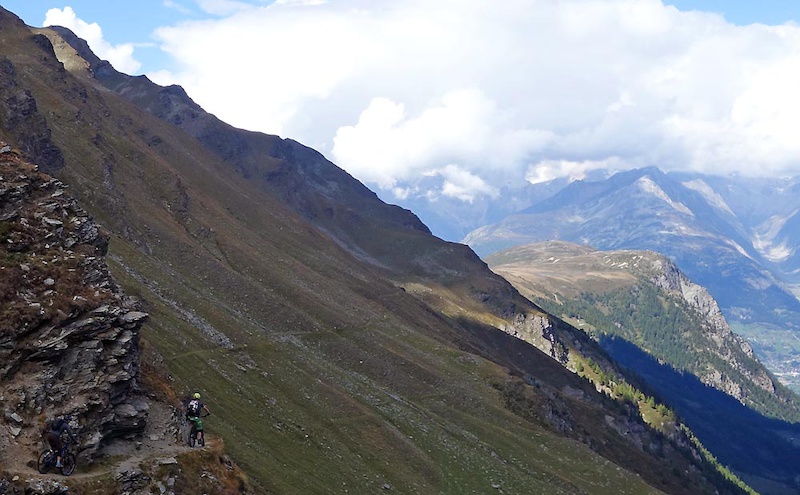 Trail along the Suone with some exposure 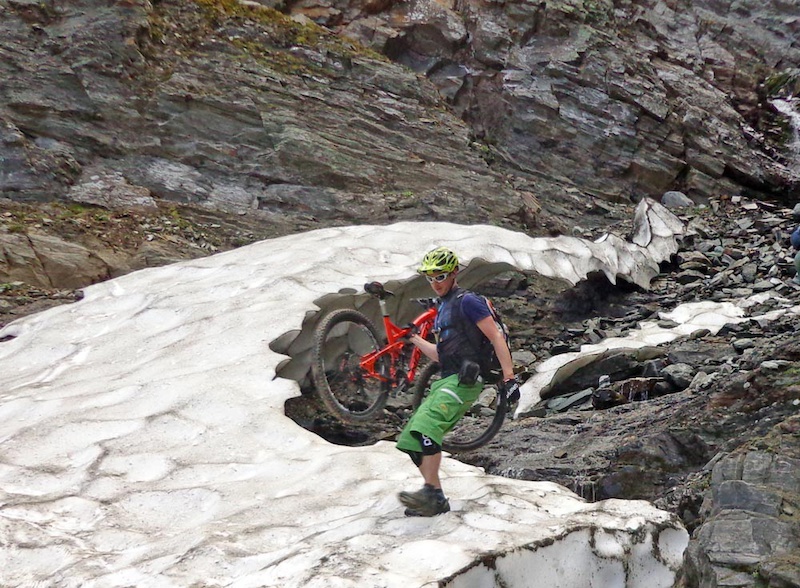 One techy section with a bit of left over snow 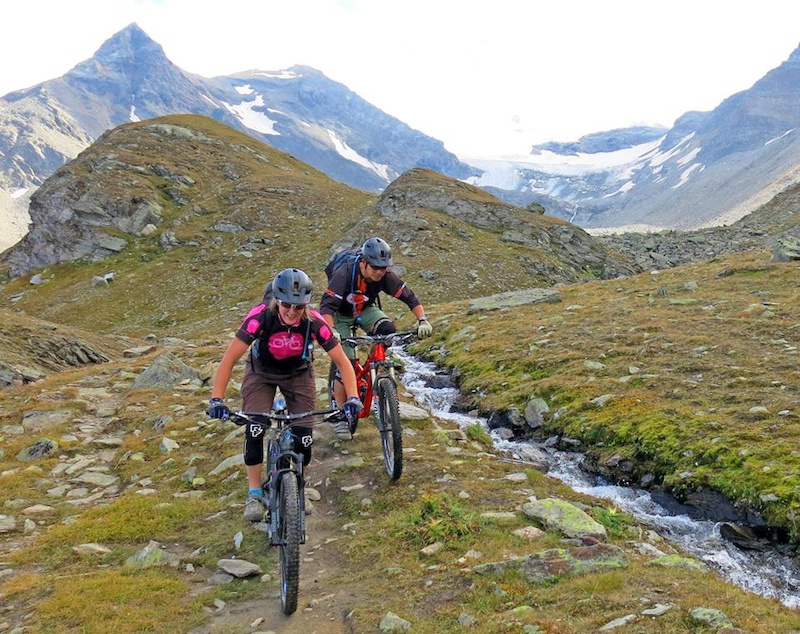 The Suone was built for the town water supply centuries ago. They are still used for water and irrigation purposes and also have an added tourism attraction aspect. 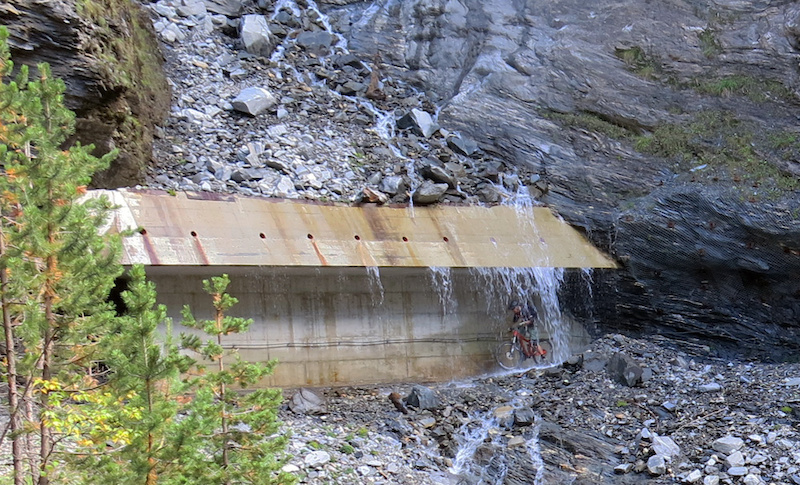 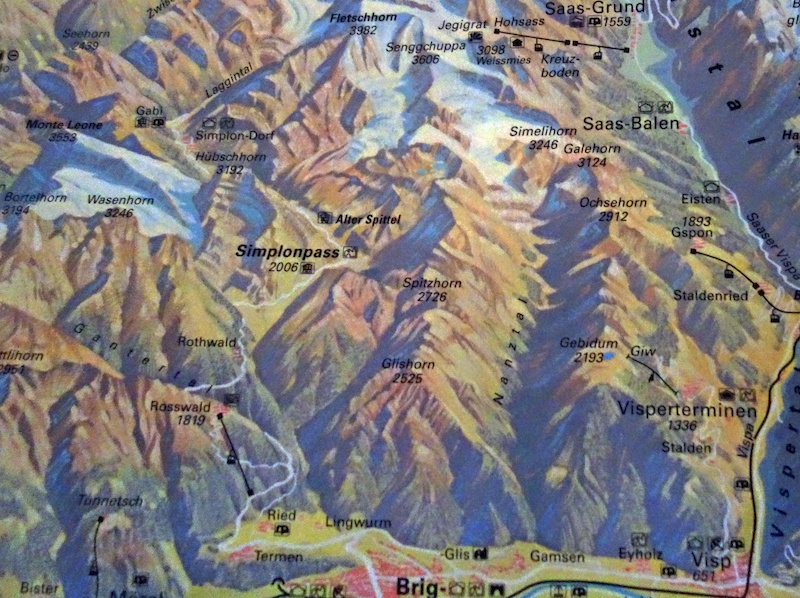 Map of the route that we took

We stayed at the Hotel Victoria in Brig. This hotel is right across from the train station which makes for exceptional convenience. With the windows closed it was quiet at night despite the central location. We had the half board which included food which was very good and varied (ignore older TripAdvisor Reviews which are now obsolete). It was nice to be able to wander around Brig's small but interesting down town by foot, hang around the town square drinking beer and eating Wernli. Also all the buses and trains one might want to use for biking-assist leave from this location. We found the staff to be helpful and the food to be also good. 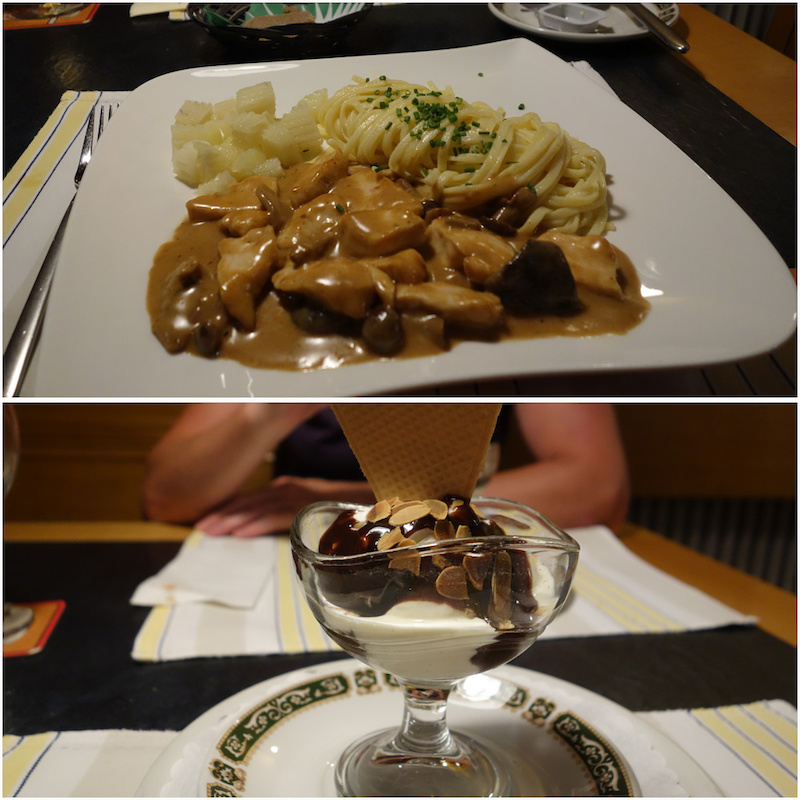 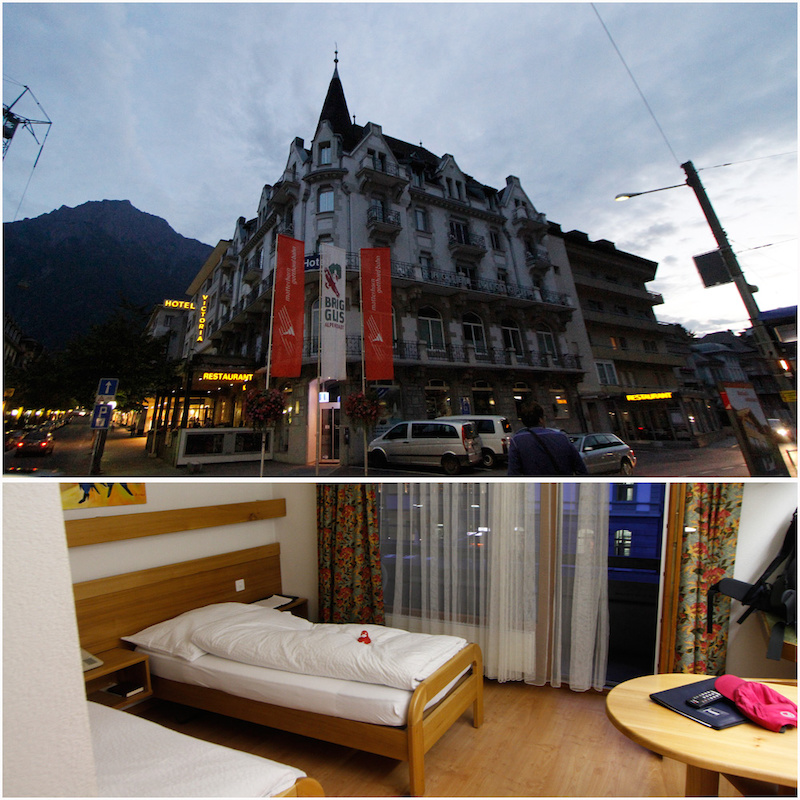 Hotel Victoria and our rooms.

Keep a look out for part two, coming next Sunday.
MENTIONS: @leelau @Alpine-Trails-Switzerland

deadtime (Mar 1, 2015 at 7:55)
The overview map was especially helpful. Theres just something about an informative map that adds so much depth to an article. Maps are cool.

not read the article yet but it looks pretty rad

mylifeMTB (Mar 1, 2015 at 6:06)
A REALLY WONDERFOL TRIP . Qinghai-Tibet plateau of China is also a good place to ride but it is more difficult , the average height above sea level is 3000 meters and the weather there is changeable .

Alpine-Trails-Switzerland (Mar 1, 2015 at 6:54)
Hi @Jubbylinseed I understand that this might look like a high price. Being in Switzerland for a while, you must have realized that the price level here is quite high. When you consider that the package includes airport transfer, all cable cars (some cost up to 95 CHF/day), hotels, uplifts by van to remote valleys, guiding, etc this might put it into perspective.

cxfahrer (Mar 1, 2015 at 8:00)
Switzerland is waaayyy too expensive - in every aspect. I would really like to go there for a MTB holiday, but I would have to sleep in my car and bring all food and beer with me. Sad, but thats like it is.

CaliCol (Mar 1, 2015 at 8:33)
I was in Germany from 5Jan-13Feb and wanted to go to Switzerland but couldn't make it. But, then again, snow in mountains doesn't appeal to me too much being a MTBer. @cxfahrer, for what it's worth, even though I didn't touch a MTB for those forty days, I had a blast in your homeland. Made some life friends German and American during my stay.

wingguy (Mar 1, 2015 at 10:08)
Jubblyinseed - if guided riding packages aren't your thing why don't you just take a train to the mountains and bring a map? (When the snow melts, obvs)

BryceBorlick Plus (Mar 1, 2015 at 16:51)
You can ride the Swiss Alps on a budget if you research some of the smaller places. Some have very reasonable hotel + gondola packages. And theres Migros.

minus8 (Mar 1, 2015 at 19:15)
Switzerland is very expensive but definitely worth doing at least once. Such a clean, friendly and beautiful country.

leelau Plus (Mar 2, 2015 at 11:09)
@Jubbylinseed where are you in CH? If you're in ZRH it's not so hard to do many of the trips into Graubunden yourself. Can even do it as weekend trip. Buy your food at Coop and Migros like Bryce said and it's not so bad. Get your Postauto and train pass annually and it's even less expensive.

leelau Plus (Mar 2, 2015 at 15:37)
BC - Bring Cash. I should really write something about how do Vancouver, Whistler, Squamish on the cheap. It's the most popular asked question on the forums

gbx (Mar 2, 2015 at 5:04)
May I add that SBB -the trains- cover up almost everything, every path as an alternative. Also, another alternative to the excellent Alpine Trails is Swiss Trails, which manages the hotels and travel bags transportation. Everybody in Switzerland collaborates with the tourist and tourism related, you will know places you wouldn't even dream and everyone is happy to have you at their place.

motorstone (Mar 2, 2015 at 11:16)
Switzerland can be done on a budget if needed but it IS a holiday right? So who wants to scrimp on a holiday? best to have some fun and enjoy what you came for...And the Swiss Alps are truly spectacular! Work to live, not live to work eh?

alexchain (Mar 2, 2015 at 15:35)
Everything depends what you want, for sleep you have a lot of camping places or Jugend Hostel for a good price an also you can rent the cable car ticket and pay just a little part of the normal fare, you can eat for les a 20 sfr. at Migros or Coop restaurants, and every trail or path have a signal you just need a map from the Turist Office, for free.And Ride

HugTreees (Mar 1, 2015 at 6:13)
This article just makes me want to go to Switzerland even more!! It's great how informative it is too.

leelau Plus (Mar 2, 2015 at 11:22)
By the way editors revisions took out my habit of putting in one cool Swiss German word per story. The word that should have been put in: Schläckstängu

bigneddy (Mar 1, 2015 at 8:51)
Good video, but not nearly enough slow-mo footage. Please bring a drone with you on your next adventure. Thanks!

caribooyj (Mar 2, 2015 at 8:34)
Had so much fun riding in Austria last year. Kick-ass food, super friendly people and fun trails. Should be a must for every one visiting the Alps.

wakaba (Mar 1, 2015 at 8:58)
Guide Michelin Suisse? Plenty of great restos. Diy...the organic local foods are awesome. Are you sure you mean France? Sofar I only had great food in Paris only. The province only has greasethroughs..
Below threshold threads are hidden

BigMountain (Mar 1, 2015 at 15:26)
Great story, thanks for sharing Pinkbike!
We've been exploring the Wallis region of Switzerland for over a decade now and have put all of our findings into an awesome 8-day trip, Cloudraker. It's not cheap, but neither is Switzerland! But we can assure you that this riding adventure is truly epic! We used to go to Brig on this trip but don't anymore...there's so so much great riding in this region. Viva la Suisse! Check it out: www.ridebig.com/trip_switzerland_cloudraker.php

Smell-The-Glove (Mar 1, 2015 at 17:03)
Are you going for the pinkbike dsppoy? The douchey self promoting plug of the year award? Lookin good