Join Pinkbike  Login
Spank has been around for a few years now, but in the last few years the folks at Spank seem to have shifted up a gear with their components and have made everyone sit up and take notice. Producing a range of good-looking, well-designed and competitvely-priced gear has propelled Spank to being one of the brands we always keep an eye out for. Riders seem to agree too and Spike pedals are selling as fast as they can make them. At the Taipei Cycle Show, Spank brought prototype wheels and a stem for its Oozy all-mountain range and a cheaper version of the ultra-popular Spike pedal. The new Spike single-crown stem is also making it's first public appearance as it begins to ship to distributors across the world. 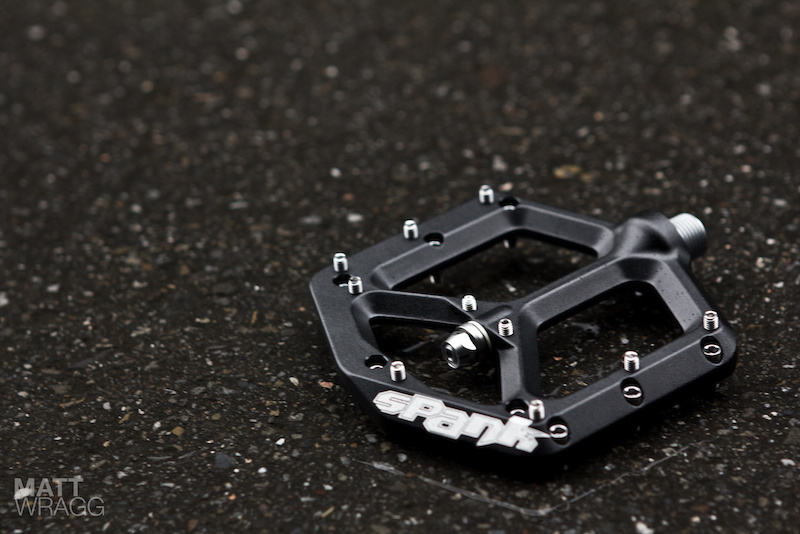 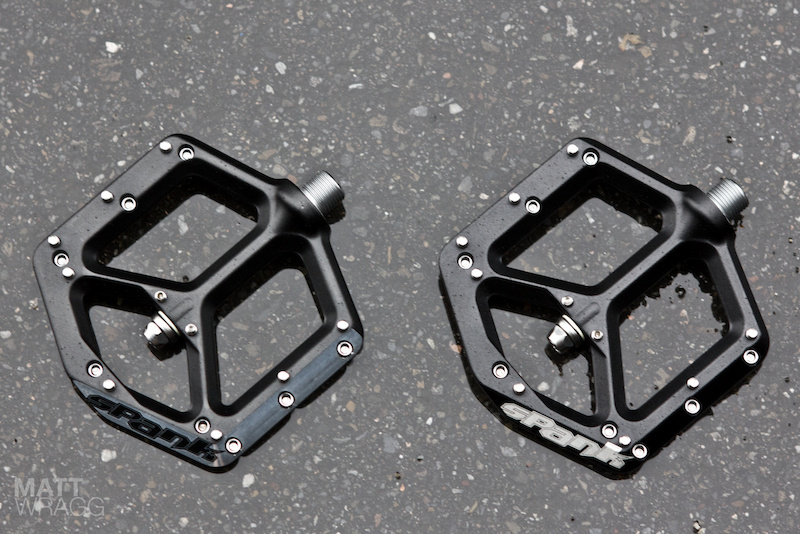 The two versions of the Spike pedal side-by-side, the new version is on the right 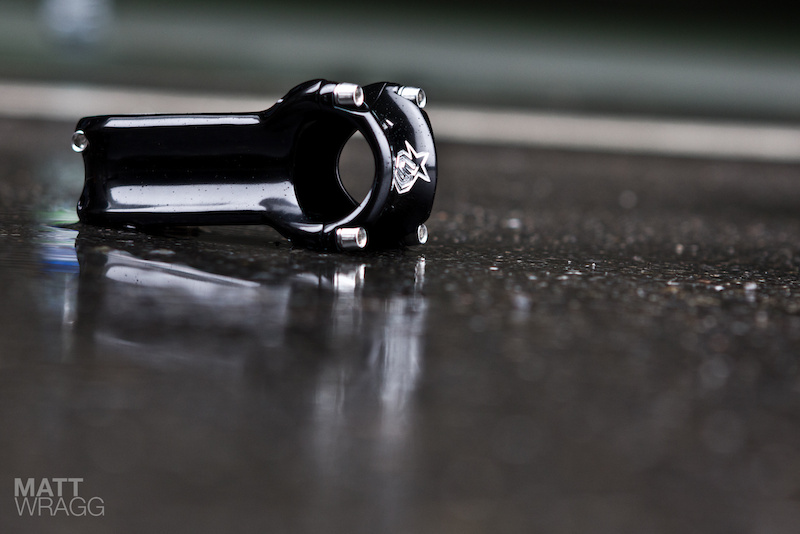 The Prototype Oozy AM stem 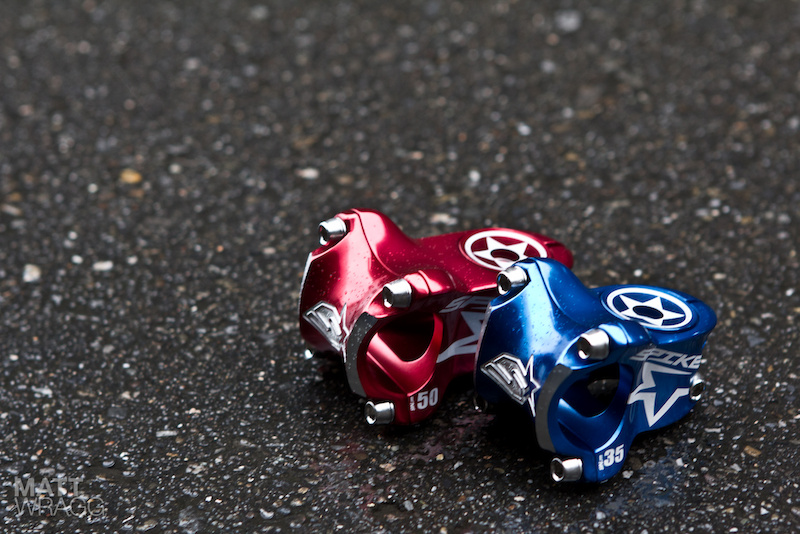 fr3er1d3r (Mar 9, 2012 at 20:25)
I actually think those pins should be more aggressive. They're nice, but ever since I've been using pins like the ones that come on twenty6 pedals and straitline amp pedals and also the azonic 420's I have not had a pedal slip and dig into my shin. Sure, if it happened it would be worse but with those types of pins it happens less but some people like the option of having less grippy pedals but that's not me. I don't do tailwhips or anything that gnarly so maybe these pedals are more for those guys. Wouldn't hurt to have a different pin option though.

rangemaster (Mar 9, 2012 at 22:03)
don't really see why pins are such a big deal. i have a pair of trailking pedals with same type of pins. they got damn good grip but it's not something that hasn't been done before. i do like the thinness of these though.

moose-teq (Mar 10, 2012 at 14:47)
So do straitlines old pedals... In more ways then one... I would rather spend the extra money and have bearings in my pedals then to save some money and just run bushings, hopefully these arent as bad as the old straitlines where you had to take them apart and clean or replace the bushings because the pedals stopped turning. They look awesome though! And i wouldnt mind trying those oozy evo 29er wheelset.

eatridegrow (Mar 12, 2012 at 2:51)
@johnny-compton Frankly that's around 450 in old money and is only to be expected for that can of weight group, and given the kind of riding that Spank products are aimed at i should expect that they should be at the tougher end of the AM spectrum. Plus the finish looks kinda nice and there are lots of options.

Those stems however are JANK.

finnrambo (Mar 14, 2012 at 20:51)
@johnny-compton quit bitching there are more expensive ones, I look at the $4,600 reynolds RZR to cheer me up although not the same category

johnny-compton (Mar 15, 2012 at 11:20)
i didnt realise that it was in CAD so i wasnt bitching, if that was in GBP then to me that would be pretty expensive for a wheel set

and I'm thinking about the tug-job grips.

OswestSte (Mar 10, 2012 at 11:16)
HA,HA 3 neg props sorry guys but most of the rims in their range have no eyelets and are pinned not welded, which is piss poor. these pedals in my opinion dont look up to much. O.K THE DH TYPE STEMS LOOK ALRIGHT, but the longer XC stem looks cheap as,

knarrr (Mar 9, 2012 at 19:19)
Cool pedals. But honestly I am sick of hearing about new pedals that all come from the same factory in Taiwan. At least these are original.

shishka (Mar 9, 2012 at 20:03)
I like that spike stem and the top cap the come with it. Those pedals look good but wish they had more concave shape then they be perfect.

snide (Mar 11, 2012 at 17:28)
I got sick of rebuilding the straightline pedals every 3rd ride and bought a pair Spank Spikes maybe 6 months or a year ago now. They've been rock solid. They're super grippy with 5-10's and have stood up to the Pacific Northwest mud so for. They look sweet too. Only weird thing is that they make this rubber squeaking sound with 5-10s. I thought it was a bearing at first, but nope. Move your feet around on the pedal and the noise goes away. I'd like to try the rims next.

jaseridesbikes (Dec 16, 2012 at 18:47)
I've been riding the Oozy Evo wheels for a few months now on my Transition Bandit. Really stoked with them, good stuff as always from Spank Bikes! For anyone interested, my write up is here: www.ridemorebikes.com/spank-oozy-26al-evo-wheelset

kevz0r (Mar 10, 2012 at 0:48)
Ive been running the Spank Subrosa rims on my 29er and my AM bike, ive been pretty happy with them. nice and wide tire profile, the hoops are stiff and they have stayed round so far,

mmoon (Mar 9, 2012 at 19:56)
I wouldn't say the products look cheap, but I was unhappy with the clear-coat that started to come of my polished bar and was very unhappy when they split (actually I didn't get hurt so it was funny) when I was pulling UP as well

. I was bunny hopping a large root.

My bars looked like this after a year and a half: img.photobucket.com/albums/v630/mmoon/P1000083.jpg

To be fair a year and a half is half a year longer than recommended and the bottom of the fracture point was already oxidized so they had been cracked for some time before I made a powerful enough movement to rip the bar apart.

The stick was in there so I could ride my bike down, but it broke right away and got stuck in the bar.

I stopped running their bars and do not intend to run the stems, but the pedals look pretty slick. I'm just too happy with my cheap and lightweight Deity Compound pedals to run anything else at the moment though.
However, the hoops look nice, it might be worth giving Spank another go.

denverdh666 (Mar 10, 2012 at 1:41)
yeah mine broke in the same exact spot! i do have some rims of theirs(subrosa and spike) and i have beat the shit out of them and never even loosen. i have dent a subrosa pretty bad but my tire was a little low so it was probably my fault ha

tetonlarry (Mar 10, 2012 at 8:09)
Handlebar lifespan? I've never heard of anything like this. There is no reason a well built set of handlebars should have a lifespan of 1-2 years. Where did you see that these Spank bars have a recommended lifespan of only 1 year? I've bent handlebars plenty of times, but never seen a catostrophic failure like the one above. I would think that this was caused by either a manufacturer defect, or a poor design. I've never had a bike that was more than 3 years old, and I probably never will so I don't really know how long bars usually last. I would think 5-10 years at least, depending on how the bike is ridden.

mmoon (Mar 10, 2012 at 13:13)
I've read handlebars should be replaced every year a number of times, don't know if Spank's website specifically states it though. I don't generally follow the lifespan thing and have had better luck with other bars being run for longer periods of time, but I didn't want to downright thrash Spank. I thrash my bikes pretty hard and understand other people will have better luck with the same components, fortunately I'm just a bit over 150lbs so my components don't break that often

misspent-youth (Mar 13, 2012 at 12:18)
To tetonlarry, all components have a lifespan, especially parts that can take alot of force such as bars, frames, cranks, stems, seats and seat posts. You can only beat on something so long till it fails and you get hurt, which is why it should be replaced before you end up in the hospital with a bar stuck in yer gut...... RIDE SAFE!!!!!!!

spaced (Mar 10, 2012 at 5:00)
So they use less cnc'ing to lower production cost but the pedals are still stupid expensive?

tylerthegiant (Mar 10, 2012 at 14:05)
Spank is so sweet.! Just July some tweet tweet rims. Bought a spoon stem and spike peddles and might buy a seat to. Spank is so rad. Almost bought some spike bars but got rethal fat bars.

MarysvilleJack (Mar 12, 2012 at 10:18)
Let's hope that Spike stem is stronger than the last one. I broke mine first ride on a damn pump track. The pedals and wheels look great!

waxyfeet (Mar 10, 2012 at 3:19)
The Spike pedals aren;t prototype, they have been available for purchase for a while now.

jakwob (Mar 10, 2012 at 3:23)
Yeah but if you could read, you would realise these are a fatter less machienend less expensive version. Thus being a prototype.

duttonmike (Mar 19, 2012 at 23:43)
Spikes were released one year before the AMPs, Hopes, new Atomlabs, or Spesh models which share that design...check it out.

turdsandwich (Mar 10, 2012 at 21:01)
did anyone else bnotice how the pedals were labeled spank, but the article kept writing spike? and it also said spank in title...

duttonmike (Mar 19, 2012 at 23:46)
Spike is Spank's Gravity Race line...all designs in the Spike line are intended for Enduro to DH race, but max consideration into light weight. Oozy is Spank's Aggressive Trail/All Mountain line. It crosses the boarders between super light trail gear and AM toughness. If riders want something light, but a little more burly...there is the Subrosa line, which boarders AM to Lite-Gravity. Hope that helps a little bit.

bboutin (Mar 9, 2012 at 18:56)
if you know spank, you know their products are bomb proof, but it would be nice to see a full in-depth review of the wheels in the future!

onemanarmy (Mar 9, 2012 at 17:52)
Pedals remind me of my old Ringlé Zulu planks.
Below threshold threads are hidden

OswestSte (Mar 10, 2012 at 2:58)
Sorry but dont those pedals look crap with there rounded narrow profile looking like it,s only 5mm thick where in all the parts where your foot would rest. Yes the pin design and length are good and the overall pedal depth is nice and thin, but i like a bit of pedal surface for my feet to rest on over the rough stuff. Gonna still steer clear of Spank stems,rims and pedals.

Haven't those "single crown stems" been around for a while now..

NicholasCasswell (Mar 9, 2012 at 17:58)
Yeah they look the same but in the article theyre clearly different, and a much more reasonable price. 100 bucks? hell yeah!!