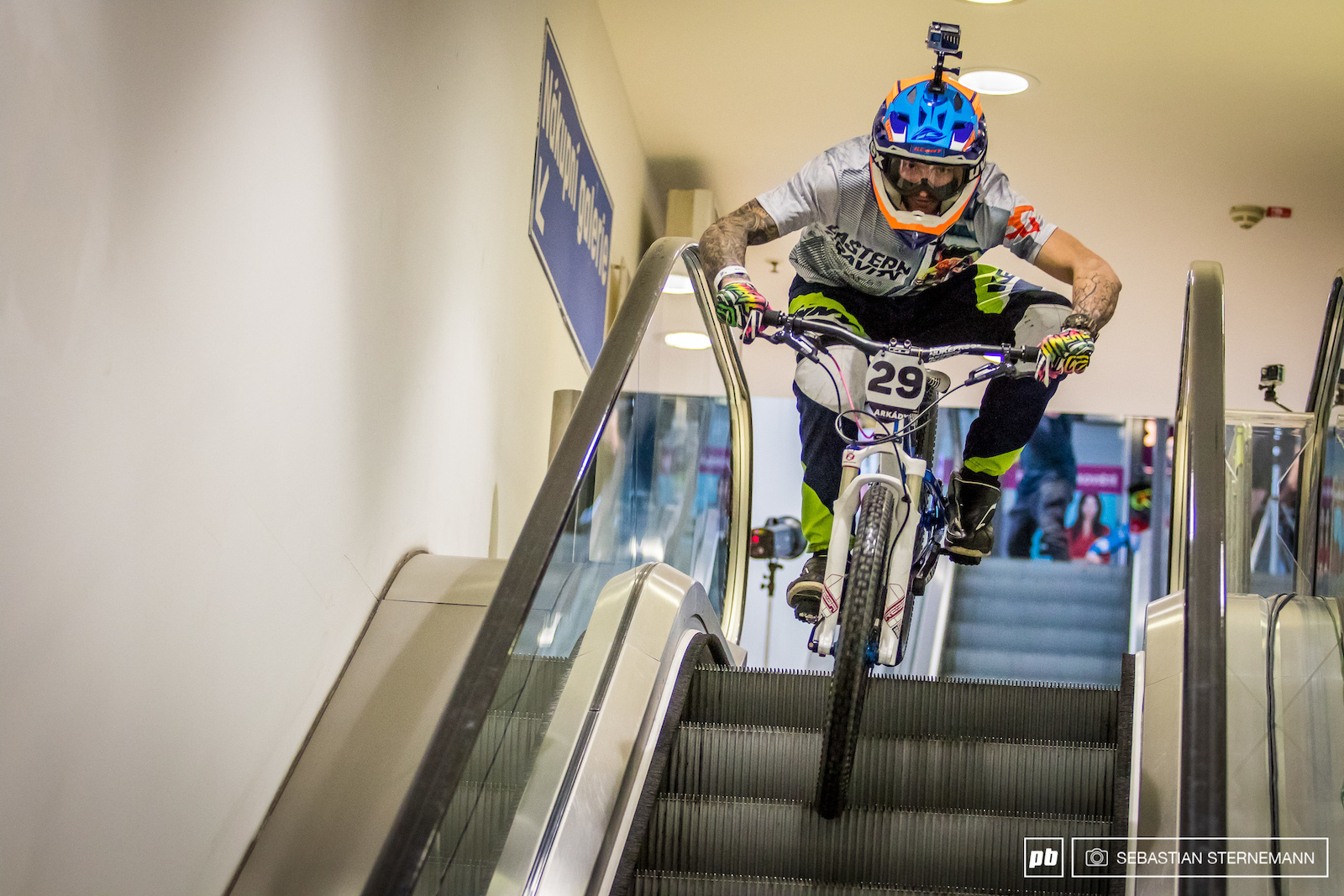 With a massive, cheering homecrowd, a TV-broadcast, and the longest track, you can say the Downmall series ended with a bang! The third and final stop of the 2017 Downmall series took place in Prague, the beautiful capital of the Czech Republic. After the short but demanding course of Budapest, Prague came up with a course of the same length as in Frankfurt, Germany. But they had an even bigger finish jump, rounded off with a quarter pipe which offered the BMX and MTB-Slopestyle pros a much better playground. With the shiny luxurious cars in between and the ice rink in front of the mall, Prague felt like the perfect venue for the grand finale – rounded up by the huge crowd which had a lot of homeboys to cheer on. Downmall 2017 – That's a wrap! Three different stops, three different winners and one unique series of urban downhill racing.

Here is the race run of the overall winner ONDŘEJ ŠTĚPÁNEK from team CTM Racing Team.

rivercitycycles Plus (Feb 12, 2017 at 19:03)
You would never see that type of race in the Mall of America......what you will see is a race to Cinnabon when they pull out a fresh tray from the oven

Fattymcbutterpants (Feb 12, 2017 at 19:00)
The thought of hucking an escalator makes my balls shrink up into my stomache and my teeth hurt all at the same time. May as well be screaming down a giant cheese grater

vinay (Feb 14, 2017 at 13:37)
Actually riding down an escalator isn't too bad. Unlike a regular staircase the transition to and from the escalator is a bit more gradual so you don't really have to jump when you enter and you don't receive such a hard hit at the bottom. It does help to roll against the direction of the escalator so the steps roll quicker underneath your tires. Just make sure no one enters it from the other side. Sure you don't want to crash or even go slightly off line but the good thing is that it is very grippy so it is all very predictable and under your own control. Actually those urban races in South America look more scary to me!

EricOsiris (Feb 13, 2017 at 0:20)
I am delighted with the interest of overseas riders over Downmall events. I was personally at the finals and the atmosphere was amazing, especially when 1,000 people at the mall screaming TOMAS - SLAVIK - TOMAS - SLAVIK on the 3 floors at the same Time !!!! A beer in cafes that have 4 steps :-D

darkmuncan (Feb 12, 2017 at 18:45)
Skinny jeans (with high elastic content) seem to be pretty good for pedalling and tricking, and offer some protection against grazing. In combination with the pads for impact protection, the Skinny Jeans would actually hold them in place pretty well, so there would be no chance of them sliding or rotating out of place if you have a bad crash.

binnes (Feb 14, 2017 at 11:00)
I actually thought the same thing until I tried it the other day with an old pair of jeans that had some stretch to them. Most comfortable I've ever been in pads. That being said, this was at an indoor bike park, so I had minimal pedaling to do, but still, don't knock it until you've tried it.

medievalbiking (Feb 12, 2017 at 23:10)
I'm just amazed people are waxing their tyres. Love racers and their weird little tricks in every environment

Titansxxxiii (Feb 13, 2017 at 4:21)
That would be so awesome here. There are so many massive mall in this country. And that is a new way to look at riding.

kbonesddeuce (Feb 13, 2017 at 7:48)
the skinny jeans guys' awards say mtb and bmx, the ones that say "race" are wearing regular looking dh stuff. was there a slopestyle type competition also?

madblack (Feb 19, 2017 at 7:01)
When a front flip no hander only gets you 3rd... When I grew a front flip was mythical! Crazy the kids these days!
Below threshold threads are hidden

CALEBTNORMAN (Feb 12, 2017 at 23:56)
I find this unappealing to an extreme level. It can stay over in Europe, thank you very much. We already have enough idiots trying to sue each other over here.