Whether we watched them compete live or from the comfort of the couch, alone or with fellow spectators, each of our nominees: Sam Hill, Brandon Semenuk, Amaury Pierron, Danny Hart, Chloe Woodruff, Emil Johansson, and Marine Cabirou, had us gasping with excitement and yelling expletives out loud at their outstanding performances.

While all of these athletes were awarded gold medals for their efforts, there can be but one winner of the Pinkbike Award for Best Performance. 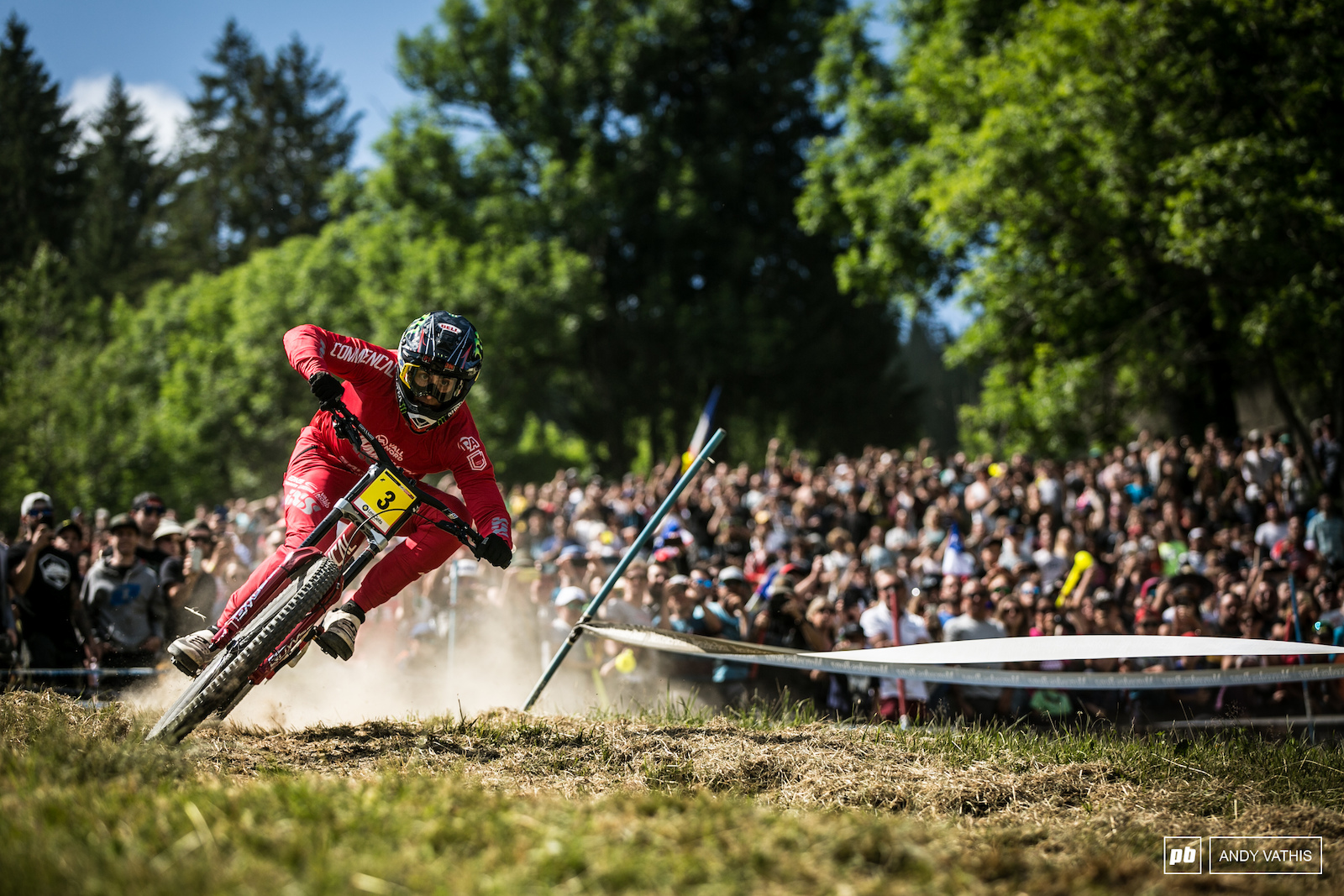 Commitment, technique, and precision all boiled down to a performance far above the rest.

The atmosphere was electric on Bastille weekend at the Les Gets World Cup. As the top qualifier and last man down the hill, Amaury Pierron had the pressure of a nation on his shoulders.

Right out of the gate, Pierron was on the pedals and absolutely flying at the top of the course. With a proper two-wheeled drift on the grass corners, racing on the absolute ragged edge, it almost looked like he wouldn’t be able to hold on. He managed to keep it together, but only just. He was 1.154 seconds faster on than anyone else on that top section heading into the key forest section.

As he headed into the woods, he extended his lead, keeping it unbelievably fast but under control. The hard work was done at the start of the run and he just had to manage his gap from there on down... But how could he know that? Instead, he gives us more two-wheeled drifting, sends the jump deep and is 1.602 up with three turns to go. 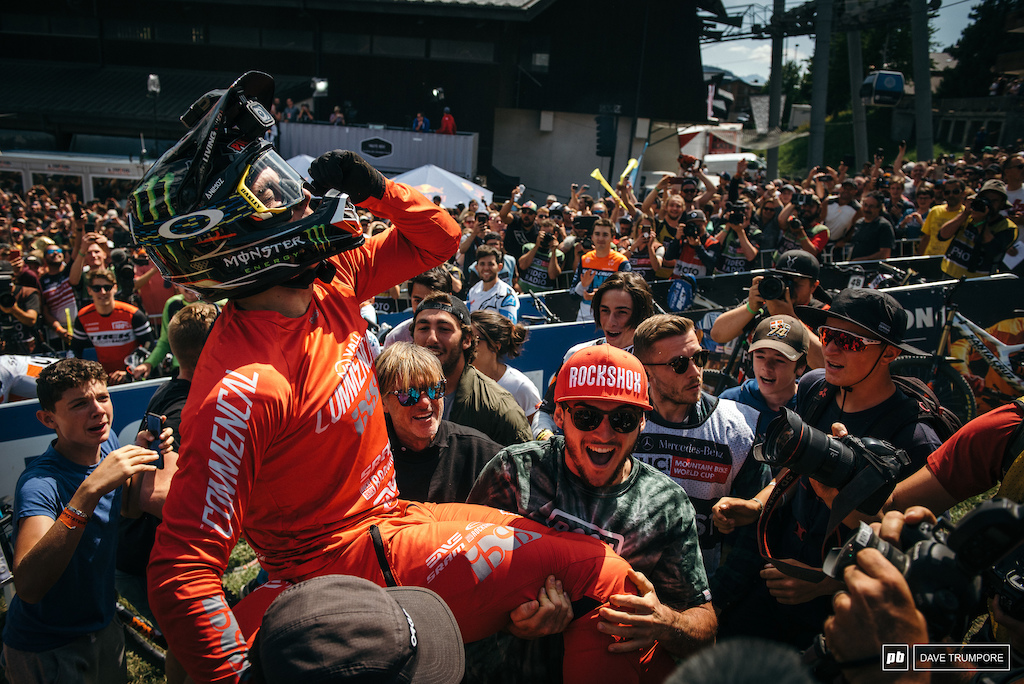 When Pierron crosses the line for his second World Cup win of 2019, he's 2.352 seconds up. Despite the pressure of a nation, he goes fastest in qualifying and fastest in finals. Commitment, technique, and precision all boiled down to a performance far above the rest of the field. A French victory on French soil and the performance of the year.

Ricolaburle (Dec 23, 2019 at 0:28)
So strange... We don't say "Bastille day" or "Bastille week end". This is the 14th of July, same as your 4th ! Or "fête nationale" sometimes. But not Bastille weekend... "Bastille" is now a subway station for the parisians. Or Bastille square, where our well known demonstrations take place. Anyway, Amaury is a beast !

jaame (Dec 23, 2019 at 2:02)
Thanks for that. It's always interesting to get these pieces of knowledge from those in the know. It's amazing how many things we have different names for in different languages, countries and cultures.

BenPea (Dec 23, 2019 at 5:32)
@jaame: you have to pleased with Britain finally having it's own Independence Day in a month's time. AKA le Jour de Pfeffel in France.

WAKIdesigns (Dec 23, 2019 at 6:24)
@etbikezcom: you peasants! our commentators talk about species of grapes growing in the area they are riding through

BurningBeard (Dec 23, 2019 at 8:45)
@WAKIdesigns: yeah, and the best theme of them all - incredible medieval chateaus, placed strategically on even intervals during the stage.

Matt115lamb (Dec 23, 2019 at 9:42)
@BenPea: we leave the EU next month , N Ireland will join Ireland next year , Scotland will leave the UK and join remain in the EU , Wales will feel left out and be so skint they will join Scotland and one Ireland in the EU , England will be by then feeling the era of it ways and ask Scotland, lreland and Wales to form a Union or equals . We’ll all be back in the EU like a BIG happy family ! Or not

BikesBoatsNJeeps (Dec 24, 2019 at 5:13)
@jbravo: @kylar: there was an entire movie with Bill Paxton and Randy Quaid named Independence Day. Plus every auto dealership has a sale dedicated to our struggle to gain sovereignty from an oppressive government.
Just a quick question though, ever since President Paxton and Ambassador Goldblum freed the world from alien overlords, do people in France celebrate July 4th as world Indepence day and Bastille day on the 14th? Seems like two paid days off work in the same month would be tough on an economy.

BenPea (Dec 24, 2019 at 7:37)
@BikesBoatsNJeeps: dude, we have the whole of May and August off and go on 7-month strikes in between. We'll celebrate Mother Mary's cat getting speyed a couple of millennia ago if it falls on a Thursday.

hypermoto (Dec 23, 2019 at 0:21)
Most of the content on PB is subjective, so its nice to have a clear winner here that I believe we can all agree upon. This run was exactly why we tune in for every race. When all the stars align, you get 'the perfect run'.

cmrn (Dec 23, 2019 at 1:17)
Great choice, in a year full of incredible performances. As spectators we were utterly spoiled this year in both DH and the EWS. So competitive all year. Tracy vs Marine, Sam vs Florian, Loic vs Amaury, all complimented by brilliant performances from those just behind them, yet all contrasted by the insane dominance of Courdurier's perfect season.

rideyobike86 (Dec 24, 2019 at 10:27)
Women’s XC this year is worth mentioning along with all that. Lots of excitement and surprises this year. But don’t get me wrong, DH is my favorite. I feel like Danny’s winning streak that almost took the overall away from Gwin lit a fire under everyone’s ass and it’s been insane ever since. Old guys getting fast again, new kids taking wins, sick tracks both old and new, seeing persistent ones like Brosnan, Vergier, and Greenland take wins, it’s all just been absolute fire. I’ll always admire the greats like Peat and Minnaar, and Sam’s glory days in the sport, but these last few years have been on another level. LONG LIVE CHAINSAW!!!

Flunt (Dec 23, 2019 at 2:44)
The POV footage is simply amazing. All the great things our sport is giving us in a highlight reel...also the other riders are impressive how they celebrate Amaury! So positive! Good vibes...I love it

Otispuppy (Dec 23, 2019 at 10:17)
I was lucky enough to be there for the weekend and can verify it was pure insanity! The whole town partied hard after that win.

farmergilles (Dec 23, 2019 at 5:37)
oooooouuuuuuuuh allez les Frenchiess........ so much love and great battle between them, Amaury tu merites.. clairement