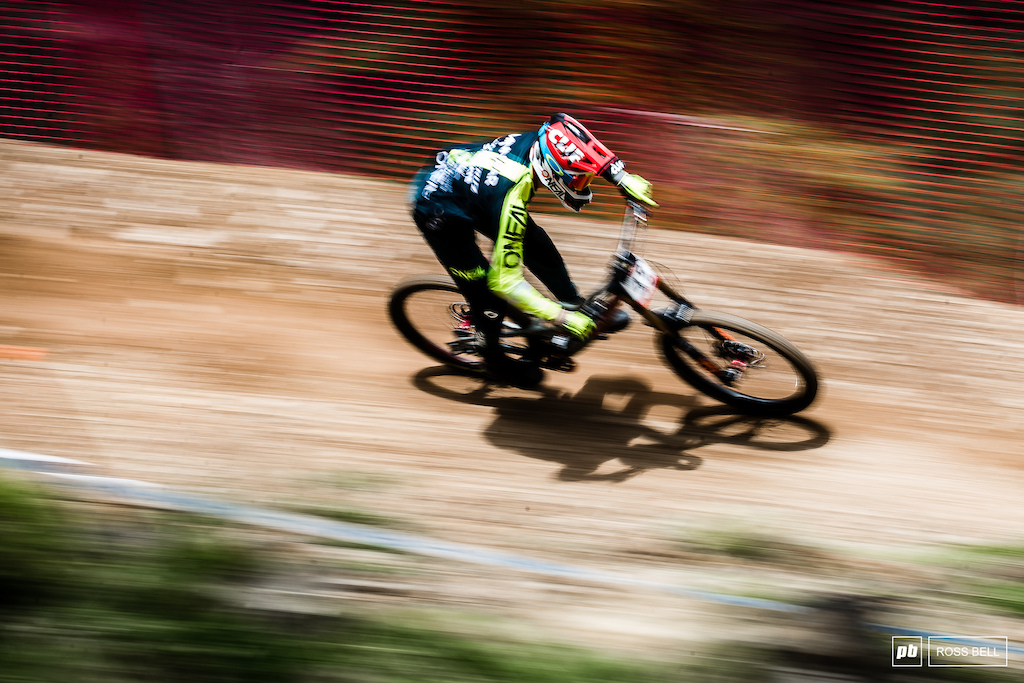 Greg was on the track testing but there was no racing for him this weekend here in Andorra.


After a crash while testing at Fort William fractured his arm, Greg Minnaar was planning on being out the next two races, working to get back on the bike by Val di Sole. That time has long come and passed and while there was speculation of whether Greg would race or not here in Andorra this weekend, he didn't. I caught up with Greg just before the start of finals today and got the lowdown on what the current status of his arm is and what his plan is for the rest of the season.

How is everything feeling? I saw you riding this weekend in practice but, obviously, no racing today.

Well, coming into the weekend, the plan was to race. When I had the last scan on my arm, the bone wasn't completely knitted so I've still got another two weeks. It's so close to the elbow that if I did crash, it could go into the elbow which would cause complications.

We decided I would come and do some riding, because I haven't really ridden much on the new bike and there's no better way than to ride than on a great track like this and just feel the elbow out...which it wasn't great but we still got a good bit of testing in and it's just nice to be back riding on a race track. So that was the plan but then obviously not to race because then we could risk something happening.

How does the new bike feel?

It's cool. You know, we've had a few changes with the links, just trying to refine it and get to the bike we want. With Luca and Loris continuing to ride and race while I've been injured, the bike has developed a bit. I'm halfway there...I'm on the old links right now, which felt really cool, the new ones for my bike aren't here yet, but, when we get back to Morzine this week, we'll be able to be on a race bike similar to what they're riding now and then we'll have a go on that.

For healing and recovery, what are you doing on a daily basis?

I've been trying to be in the gym as much as I can so that once the bone heals, I'll be able to be back sooner. Just sitting around the muscle just withers away so I'm trying to be strong and maintain decent strength in my arm then it's just the finer muscles that need work.

You work with the younger guys (Luca and Loris) on a regular basis on the track. With you being off the bike and not focusing on your race run, per se, how has that your role in working with them changed?

It's been really cool. You know, those guys are really established riders so they don't need too much refinement. If I find something like, here, when I was riding, I noticed a few things but it may or may not be helpful for them. I really just wish I was back racing.

What is the goal for you now? Do you have a specific race in mind? It's obviously changed some since your were first injured.

I've been going to Mont Sainte Anne since 1998. I rode there as a junior so it's pretty cool to go back there...this is my 20th year. So yeah, it's cool. It's a track I like. It's going to be pretty hard. Then again, I was talking to a few of my friends and they're like, "Andorra's a rough track to come back to." You know...any World Cup track is a rough track to come back to. They all get beat up and smashed so you don't really pick your battles, you just have to go full in.

'I'm bored out of my f*cking head, so lately I've been trying to turn them against each other, just for something to do. Like last week at VDS, I had a whiz in Loris's müesli and told him that Luca did it. Things got heated, and they beat the shit out of each other--I can't believe that one stayed off Instagram.'

aljoburr Plus (Jul 15, 2018 at 11:31)
Good too see Greg will be back racing, But do wonder about how little protection world cup racers wear, but I go riding every day with no protection, with no problems however world cup tracks are quite different as far as risk

fatduke (Jul 15, 2018 at 11:56)
It's probably a lot harder for them to move around the bike with the full power rangers get up on. Park days I'll wear spine and chest protection along with the usual knee pads and FF.

sevensixtwo (Jul 15, 2018 at 17:13)
I would definitely wear a lot of protection if I was on the world cup. At least two rubbers for DH groupies. And a chainsaw.

SonofBovril (Jul 15, 2018 at 23:53)
A lot of the guys are actually riding with chest and back protection as well as knee and elbow pads. Bruni, Vergier, Ilse etc. Their stuff is just pretty low profile and they wear long sleeves and long pants so you don't see it so much. It's mostly the older guys like Blenki etc. that ride almost completely unprotected...

aljoburr Plus (Jul 16, 2018 at 1:10)
Well it all about the confidence to not need protection & back it up with the skills by not crashing

Slabrung (Jul 15, 2018 at 13:28)
I also say "cool" quite a lot, now this gives me hope I can ride like Minaar one day (just without the injury please). That said, I really look forward to seeing Greg back racing! That would be so cool!

Heal up soon Minnaar! The WC ain’t the same without you

bankz (Jul 15, 2018 at 20:04)
this dude has the right attitude dont know for how long he'll be racing but he'll definitely race as long as he can hehe