Join Pinkbike  Login
38 Comments
To summarize an awesome weekend, here are 10 images which I think are the best from the long weekend. I'll explain why and how I achieved each shot and the story behind them. 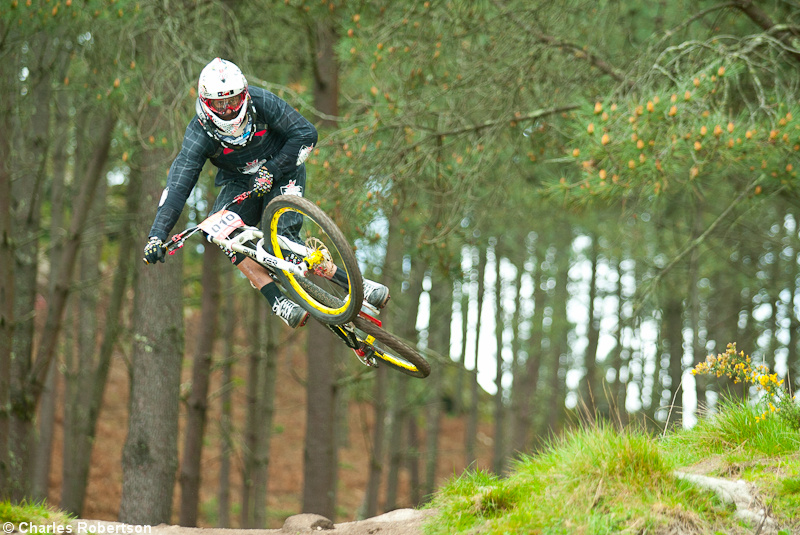 This first shot is of Cedric Gracia. The camera settings where Manual, SS 1/400th, F2.8, ISO 200 with 70-200 on Manual focus. The reason for manual focus (although I shot at 2.8 thus meaning the AF would be quick) you can never guaranty accuracy. If you pre focus then you know exactly where and when to shoot and you know it will be sharp. I also had a flash set to 1/8th just to the right out of shot. This was zoomed in to 85mm to light just under the peek of the helmet (the sun was very high so the flash exposed the shadows on the face). Why Cedric and not any other rider? 1 reason and 1 reason only, Cedric loves the camera and showing off for it. He put the effort in to look stylish and I felt obliged to put the effort in to capture it. 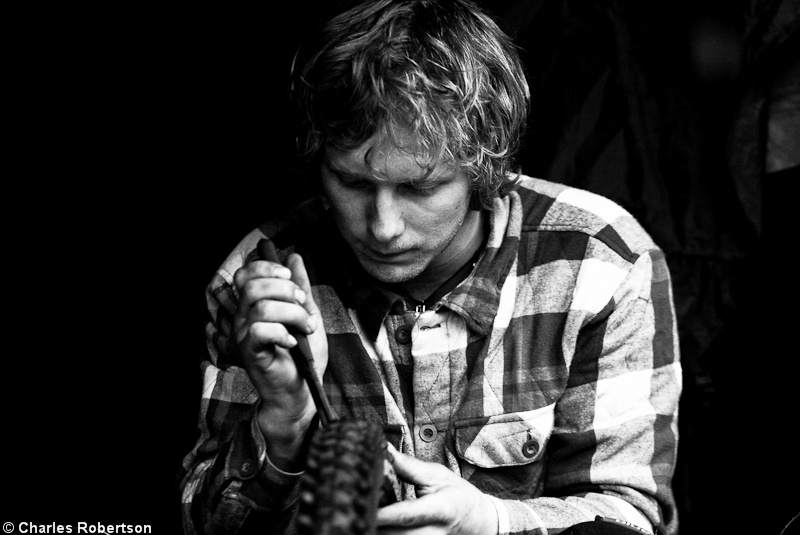 The second shot I have chosen is of Bernard Kerr. This shot I feel sums up the whole equation. He's a privateer without a mechanic, so he is cutting down his own spikes. The fact he is cutting down spikes implies that he wasn't expecting the weather conditions otherwise they would have been pre cut. It also tells you what the weather/ground is like. If you look at his face as well with the stuble that shows he has been without a shave for a while, possibly living rough. The devil is in the details and I think this shot is very detailed and yet so simple. Again this shot was on manual with a SS of 1/250th. The reason it is that high for a portrait is that I wanted to try and catch the bit of rubber he was cutting off travel through the air. F2.8 with a really tight crop to set a good atmosphere of him working on his own. That and the floor was a tip so it would have detracted from the image. ISO 800 because I'm shooting with a 10 year old camera and the noise control is awful, so I knew it would be slightly noisy adding more to the image. 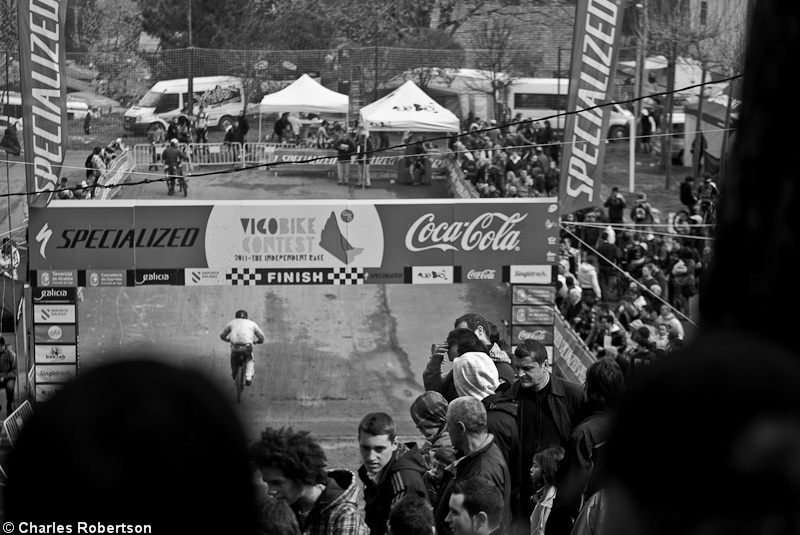 Shot 3, An unknown rider crossing the finish line with the crowd in it. The reason for this selection is to show what usually happens at a race. At a race usually your main priority is to shoot the big name riders and not so much the unknowns. In fact some photographers won't lift their camera if they have never heard of the rider. I'm not like that, I try and shoot everyone and everything. What I do though is with the unknown riders I will try and be a lot more creative because if it goes wrong there isn't a huge downside. This shot was taken on qualifying runs, the rider wasn't a big name so I figured I'd try and show some of the crowd and still maintain the rider in the shot. SS 1/500th, F2.8, ISO 100. Why F2.8 because I was lazy and it was a grab shot, realistically it should have been f8 for a huge DOF. 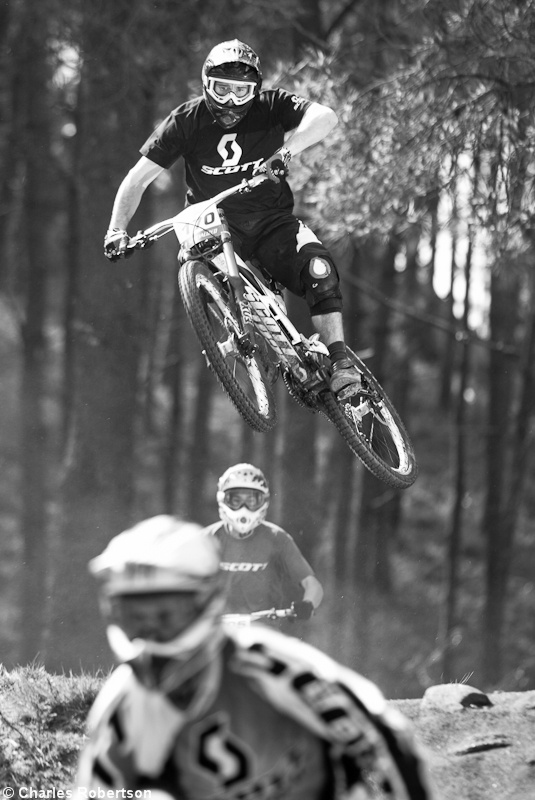 Shot 4, Three Scott riders in a train. This shot reminds me of something Sven Martin took at Whistler's A-Line. As you may or may not know I have huge respect for Sven, he is pushing the boundaries of shooting cycling with a few others. SS 1/320th Slow enough to get a little motion blur on the rider in the foreground, but fast enough to freeze the rider in mid air, F3.5 for a more clear image throughout the shot and ISO 100 as the sun was actually out. Again 1 flash to the right out of shot set on 50mm 1/4 to fill the harsh shadows from the sun light 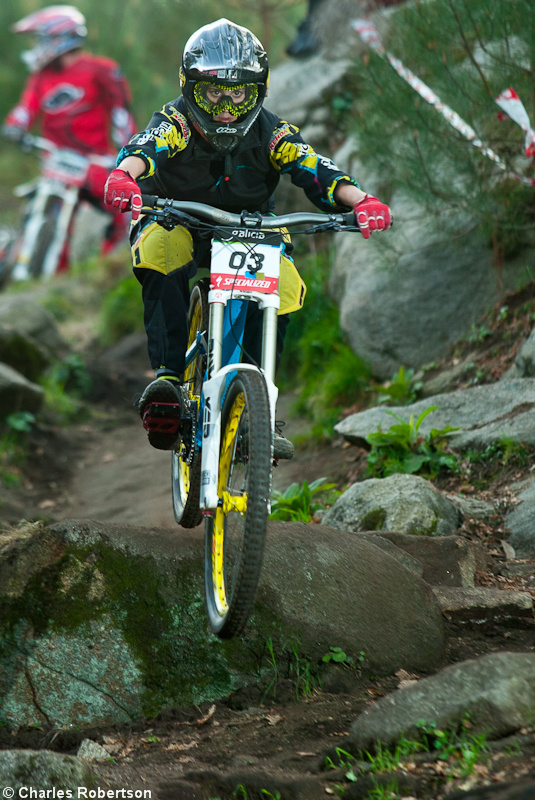 Shot 5, Myriam Nicole on the Sam Hill rock garden. Chosen because of the clear focus in her eyes. Shot at F3.5, 200mm meaning the subject was fully in focus from front wheel to back. The reason for the tight crop is there was lots of riders in the background plus the light was hideous. SS 1/320th coupled in with a flash on 1/8th set to the right at the same height as the rocker link at 24mm was enough to freeze the action 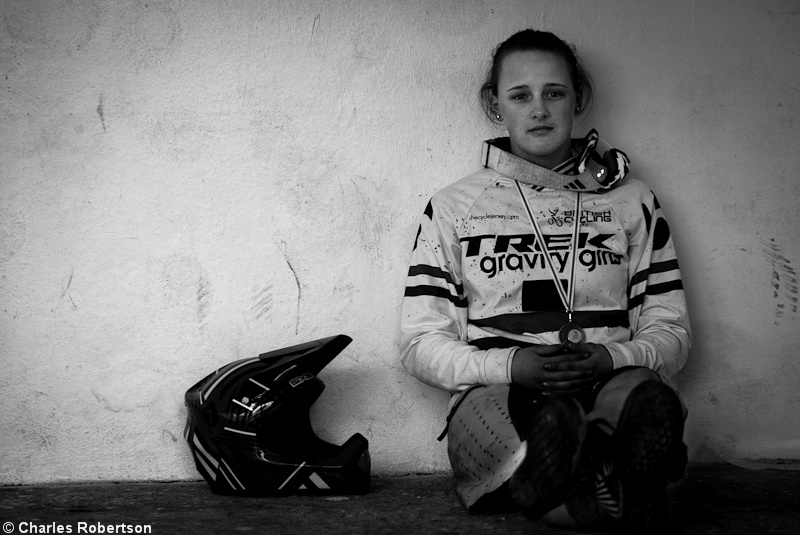 Shot 6, Another portrait this time of winner Jess Stone. This shot was set up directly behind the podium on the stage. Whilst waiting for the podium to go ahead I noticed somebody sitting on the floor against the wall and thought it would look sick in black and white. After the podium I asked Jess to grab her helmet and to place it beside her. I shot it so Jess was on a line of thirds and the helmet was on an intersection of thirds. Jess was asked to look strait past me as I don't like portraits when the subject is looking into the lens. F2.8 was the aperture as I only wanted the upper half of Jess' body and the helmet in focus. The SS was 1/640th because I wanted to freeze everything and wanted no movement what so ever. The reason for this shot was Jess won and I needed a portrait, it was posted in black and white as that is how I envisioned it 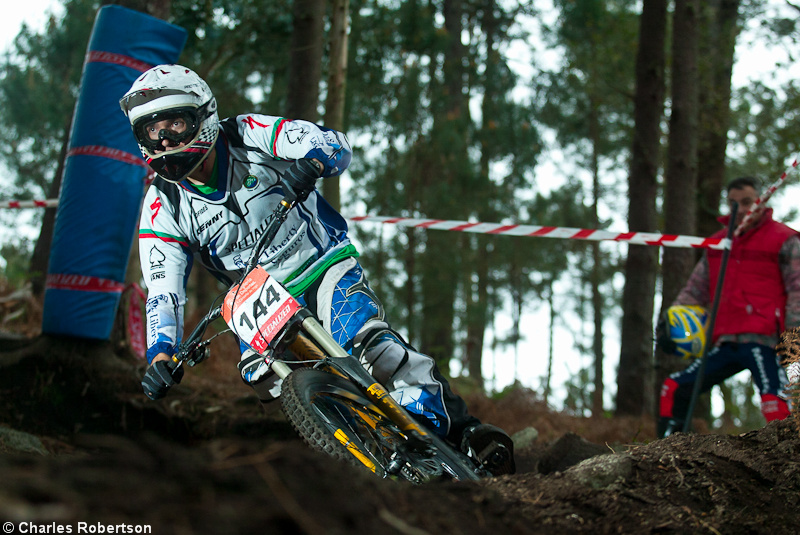 Shot 7, Daniel Pombo railing a turn with a flash out of the picture to the left set on 1/16th zoomed in to 85mm. The flash was set to under expose the background by 2/3rds of a stop thus creating the illusion, the natural light was crap because of the rain. This was partially true it was crap, but I emphasized on it more setting the flash up how I did. It's a simple shot taken whilst lying down behind the berm. SS 1/320th enough to freeze the parts where the subject had caught the flash. F3.5 to add a little more detail and to include the berm. The one thing that ruins this shot is the person in the background. I dislike people being in the back of shots. I would normally have asked him to move, but the language barrier prevented that from happening. 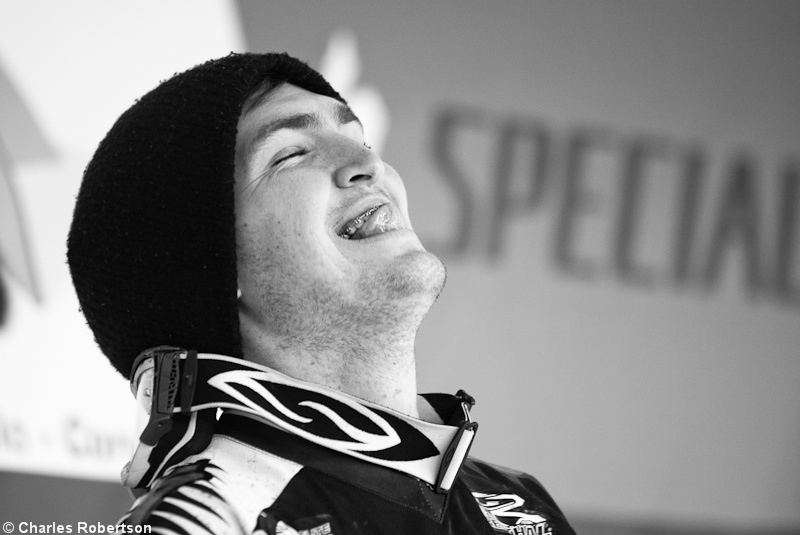 Shot 8, Brendan Fairclough on the podium. I was looking through the view finder for about a minute and a half just focusing on Brendan then all of a sudden somebody says something in the crowd and this is his reaction, I quickly shot 3 frames and liked this one the most. He clearly looks happy. Shot at F2.8 was a mistake with hind site. If it was a wider crop at let's say F4, the bokeh of the Specialized logo would have made this shot. SS 1/160th which is low considering what I usually shoot at, but it was a must as the light was low. 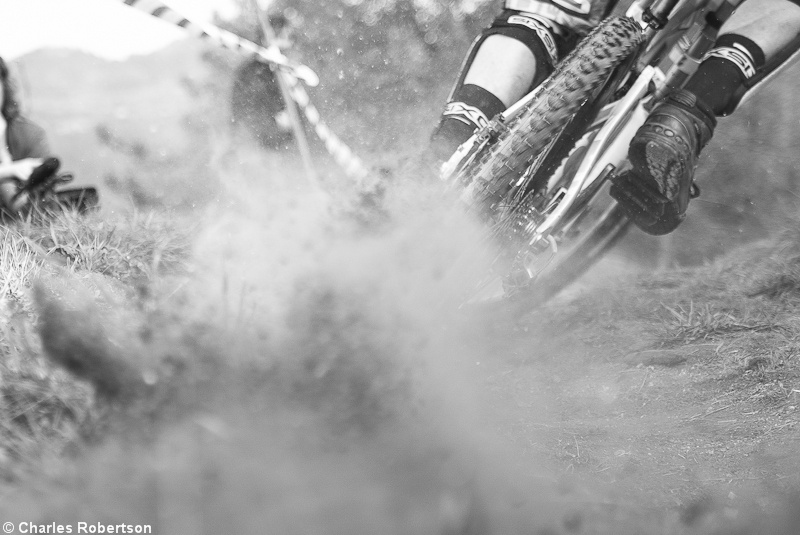 Shot 9, A roosted berm. A conversation with Ian Hylands brought this shot about. He once took a shot with a SS of around 1/1600th of a second and the rider still showed motion blur because the camera was so close to the rider. My normal style is to try and freeze everything, but I decided to try and show some speed. The SS was 1/500th which you can normally freeze action with, but because I was so close it allowed for movement to happen in the shot. I set a flash up to the left on 1/4th to light the roost and to freeze some of the subject (just a little though). F2.8 to make sure only the tyre was in focus, I'm not sure why, but I was set on it. Unfortunately you can see a little of Tom Grundy in the left of the shot, but he was also there to document the race so I can't complain. 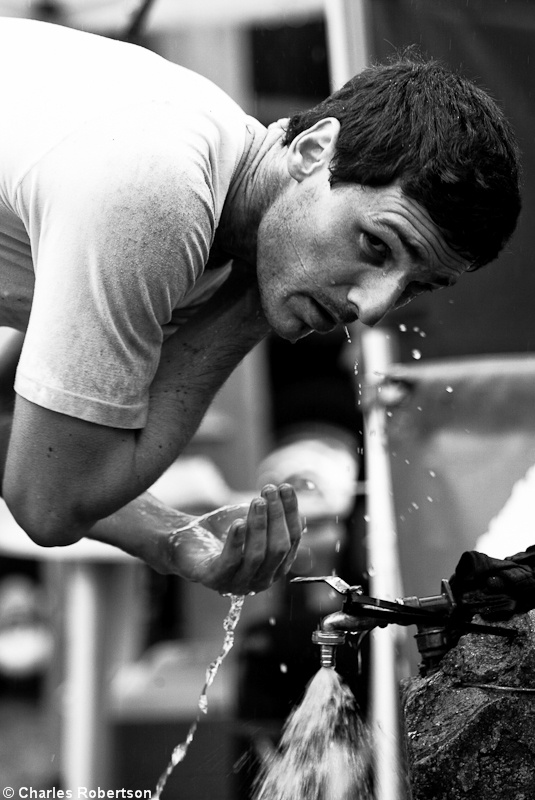 Shot 10, The Final one, the one that summarizes the whole event. Bernat Gaurdia who won this race last year, washes at an open tap in the middle of the pits. SS 1/250th F2.8 so that it captured the water drops and shallow enough DOF to blow out of focus all of the background. There is something surreal about this shot, last year's winner throwing image away and taking care of the basics. None of this hi tech showering in your hotel etc like most pros would expect. I saw this and knew I had to shoot it. It showed the facilities weren't too great and also how wet and muddy the venue was.

That's all folks, my top 10 images from the weekend in no particular order. I hope you have enjoyed the coverage I brought and I hope this has inspired/motivated you to shoot. If you have anything you'd like to say leave it in the comments section below and I'll have a read.

Again big thanks to Pinkbike for the support over the weekend.


Here is a course video from Cesar Rojo of Mondraker bikes:

Mr-Lemon (Mar 29, 2011 at 14:48)
That you would make it zero, he may have tapped the brakes in the air allowing the wheel to slightly spin backwards.

cerodesign (Mar 30, 2011 at 1:14)
We need to work out the speed thing. Now is done with GPS so when you move between to very close points, for example tight turns gets a bit crazy... Next one will be better with heart beat info and more accurate speed!

stompeinator (Mar 29, 2011 at 12:10)
The speed/distance counter in the video is really cool, I hope to see that more in helmet cam race run videos

edge-academy (Mar 29, 2011 at 17:12)
Awesome shots! Great right up. I am some what new to action photography and the descriptions of how you took em helped me understand how to take better pics!

pinkrobe (Mar 29, 2011 at 17:21)
Thanks for the detailed explanation of how the shots were done + the camera settings. It's much better than having to dig out the EXIF data. Cheers!

How did they have do the video? Is the camera that has gps tracking?