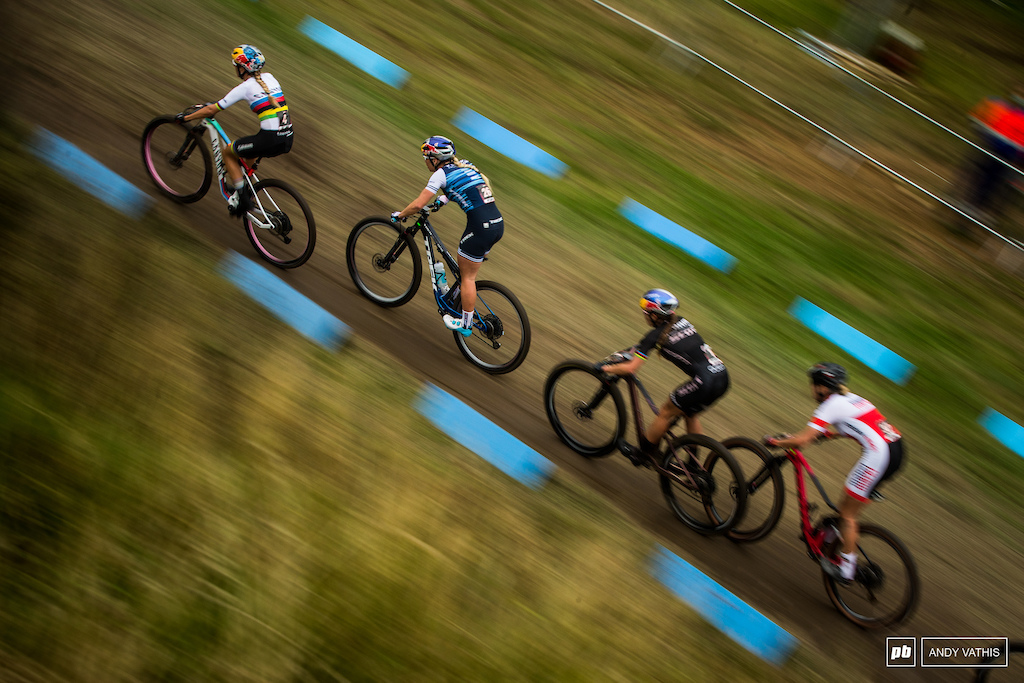 For the first time in World Championships history, there will be a rainbow jersey awarded in the cross-country short track (XCC) format in Val di Sole. With the exciting format's inclusion, first introduced in the UCI World Cup in 2018, Val di Sole will crown new UCI World Champions in six formats in 2021.

Will the addition of a rainbow jersey mean that we see more cross-country athletes specialize in the shorter distance or will it continue to act as a precursor to the longer-distance event? 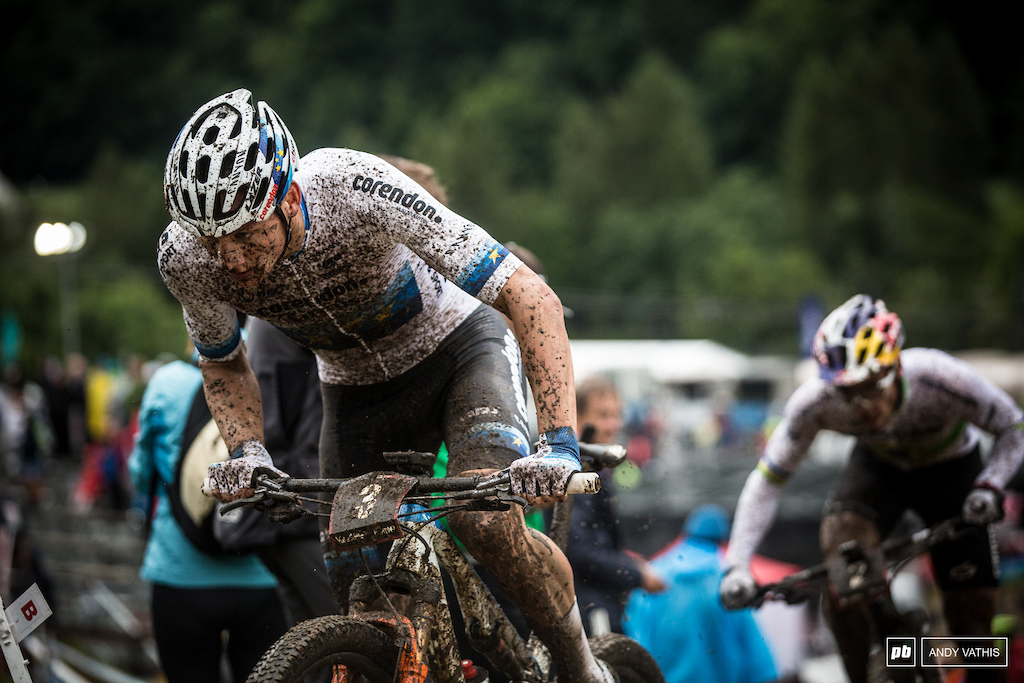 No one is stronger than Mathieu van der Poel in Short Track, although Henrique Avancini has been known to be quick in the format as well... 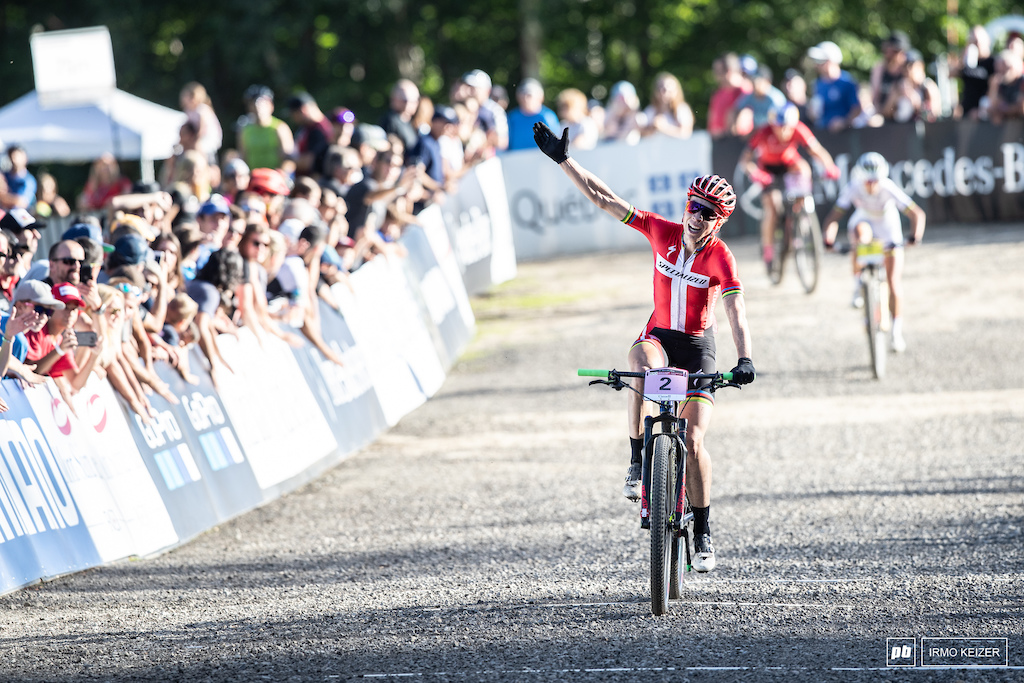 Annika Langvad recently announced her retirement, but she was a dominant force in Short Track and would have been a strong contendor for another set of rainbow stripes in the discipline.

iamamodel (Oct 13, 2020 at 17:34)
Do you have to be racing the XCO in order to do the XCC? If not, I'm sure the short race specialists will come out of the woodwork. Prepare to see bigger quads on the podium.

BigAlfonz (Oct 13, 2020 at 21:40)
Was wondering the same thing. Sagan's Olympic effort didn't work out, but imagine someone like him in this race.

From the UCI Rule Book:
A maximum of 40 riders per gender (40 men elite and 40
women elite) already registered and confirmed for the elite
XCO event taking place during the same week-end shall be
allowed to start in the XCC event. The riders shall be
selected as per article 4.9.015 to reach a total number of 40
riders per gender. No online registration is required for the
XCC event.

Ginsu2000 (Oct 13, 2020 at 17:07)
That would be nice, but the course design is intended to avoid pinch points that might string out the riders too much. It seems the goal is to have a decent-sized group of riders still in contention at the conclusion of every XCC event, to create some drama.

AndrewFleming (Oct 14, 2020 at 7:18)
@Ginsu2000: Yea, definitely agree with all that. I just think if short track is more important, then it should be more interesting. Considering all these races are at ski mountains, there is plenty of earth moving equipment to build something cool for each race.

jibbandpedal (Oct 13, 2020 at 15:57)
So would the short track winner not be allowed to wear the stripes in the longer event? vise versa for the XCO Winner?

Would be interesting / weird if the eMTB world champion (good a rider as he is) could line up in his rainbow stripes next to Sarrou or Nino at an XCO race!

Logic dictates @jibbandpedal has it correct for the new setup of who can wear the full stripes and when, going forward after world championships 2021.

Vicenbici (Oct 13, 2020 at 22:29)
@mi-bike: Hello!
, when in road bike the TT worldchampion only rides the jersey in TT courses. In the other hand the stage WChampion will not use the rainbow in the TT days.
I guess the UCI could use the same protocol.

Ginsu2000 (Oct 14, 2020 at 8:28)
@Starch-Anton: I'm not certain where this disagreement is coming from. The traditional standard for all UCI disciplines has been exactly as you describe, in that the full stripes (not just the arm bands and similar) are only worn in the jersey in which the championship was earned, up until the day prior to the holding of the next world championships. However, as I pointed out that has not been the case with XCC and XCO up until now since the XCO champions have also been wearing their stripes in XCC. As I also pointed out, and as agreed by other posters, that will change starting after the 2021 world championships. I'm pretty sure all of this is factually correct.

I'd say it's like pre-1994 when road world champions would wear the stripes in a TT, as there was no World title for ITT.

DanKaplan (Oct 13, 2020 at 17:27)
Can’t wait to get my rainbow jersey in the new category of walking across parking lot to grassy seating area.

iamamodel (Oct 13, 2020 at 17:30)
I disagree with the your sentiment, but you are funny, so props to you because I'm here for the entertainment.

WishIwuzyounger (Oct 13, 2020 at 19:14)
Based on the two-day schedule for the World Cup events in 2021 (vs 3-day in 2019) and no mention of XCC that I could see in the announcement of the World Cup dates from UCI, is XCC going to be excluded from the World Cup event weekends in 2021? No more XCC to set the first two rows for XCO at World Cup races?

Ginsu2000 (Oct 13, 2020 at 19:34)
IMHO if UCI decouples XCC from the XCO for determining starting rows, then XCC will become a backwater event that sees little to no participation from top riders. It would be of as much importance as XC Eliminator was. That would effectively destroy any status and recognition that XCC has gained over the past couple of years, and make it mostly a non-event in the grand scheme of things. I have no inside knowledge on this topic, but that's why I think XCC is almost certain to stay on connected to XCO as it is now.

Starch-Anton (Oct 14, 2020 at 11:43)
I'd be surprised if that was the case, I'm sure it's an oversight/mistake. I remember an interview on RedBullTV with Simon Burney in 2018?? and the teams had asked for another type of race, as another way of maximising exposure. I'm sure the XCC is pretty popular, even though it doesn't suit all riders.

Jamminator (Oct 15, 2020 at 1:36)
@Ginsu2000: If we're honest, the real underlying issue that prevented top XCO guys from participating in XCE was that the 4x rider bracketing format made the races move slowly. Having the top 40 male/female riders would literally take all day long...so the UCI was unable to use it as a viable format for XCO starting position (to force top XCO guys to race it).

The fact that XCE is still taking place as it's own series/circuit, with it's own world champs, is mind blowing to me.

luriaguy (Oct 13, 2020 at 23:02)
before suggesting more technical courses, take yourselves and ride one of the venues, most of us MTB heroes don't have the ability to complete one lap unless supported by EMTB. ???? handicapped category

fabriciofracchia (Oct 14, 2020 at 16:37)
Until one not XC racer win a race and they change the format ...As the UCI did with Brian Lopes time back when the XC "Short Track" or "Eliminator" existed.

RabWardell (Oct 14, 2020 at 2:24)
I expect that individual rainbow bands for Enduro are a work in progress

Ginsu2000 (Oct 14, 2020 at 8:33)
I'm not certain I would wish for that. Full UCI status comes with a host of truly onerous set of regulations and related overhead in terms of running events. Some reasonable amount of regulation and standards are good for creating professional events and a professional series. However, there is a tipping point at which it actually drags things down. The vibe of enduro events could be seriously compromised as a result. While it would be nice to have additional sources of support to grow the enduro discipline, UCI involvement is often more of a drain than a support.

mfoga (Oct 13, 2020 at 16:19)
I wouldn't be shocked this came from the different cycling federations. More rainbow stripes more changes for them to have a championship. More championship more sponsorship money for federation.

Ginsu2000 (Oct 13, 2020 at 17:10)
Although there are a few riders who are well-suited to one but not the other, most of the top names are still the top names whether it's the XCC or XCO. The training probably wouldn't be as different as you would think. 20 minutes and 90 minutes are both drawing upon energy systems in a similar way.

RabWardell (Oct 14, 2020 at 2:22)
The riders are able to train for all of the events with enough planning, and as is usually the case will target a specific event at the beginning of the season. Look at Henrique Avancini or Anika Langvad, they have both won XCC, XCO, XCM at World Cup/World Champs and have been on the podium/won stage races like the Cape Epic too. As @EricJohn says, on the road/track you can see the same riders win 4km Individual Pursuit and 3 week Grand Tours. All in all I think this is a positive move and I believe the UCI could be playing a long game to get Short Track included in the Olympics.

Vicenbici (Oct 14, 2020 at 4:14)
@mfoga: Hi!
Do you think the idea can come from the teams? They can have more options of having a rainbow jersey in the team.
I think is win win situation for both of the sides. dont know @mfoga , dont know