I work for a local bike shop that sells Pivot, Santa Cruz, BMC, Intense, Trek and Giant.
Thankfully I am no longer affiliated with Specialized. 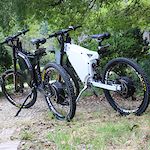 DaveJube jamessmurthwaite's article
May 25, 2020 at 12:41
May 25, 2020
Video: Conflict Arises Between 17 Year Old UK Rider & Apparent "Trail Saboteurs"
oh look, it's Karen and her friend Karen. Just out placing obstacles on trails so someone can get hurt for trying to have fun. These two cunts think that no one should be able to use the trails in anyway except for the way that they are using it. They don't see the need for people to ride mechanical devices at breakneck speeds because they don't take part in that activity. Furthermore, he should not be out riding his bike because he could pass on COVID to other animals and things. Both karens are the exception because they are out there to make sure no one else is. They can be out there because they aren't going to give anyone COVID because no one is supposed to be out on the trails. So if no one is allowed out on the trails it's OK if they go out on the trails since no one should be out there. The biker is putting both karens at risk and the rider should be more aware of his actions and his poor choice to be outside putting both the women at risk. They are out there patrolling the area to make sure people like this bike rider aren't out breaking the rules. If other people are out on the trails then both of the karens can't go out to patrol and make sure they are safe so all those other people are being inconsiderate of the karens who are actually helping the community by being out there to make sure no one else is out there.

DaveJube mikelevy's article
May 25, 2020 at 12:27
May 25, 2020
First Look: ShockTune is a Free Suspension Setup App
great, my $1200 phone went flying off the handlebars then smashed on a rock and I ran it over. I still can't figure out how to adjust my suspension correctly. actually that's not true. I know how to set my sag correctly and once I have that set i like to slow the rebound down a bit and also adjust the compression so it's on the soft side. then I just leave it like that and don't fuck with it. I seriously couldn't imagine adding a phone to the mix with even more data to absorb.

DaveJube aidanoliver's article
Mar 6, 2020 at 12:28
Mar 6, 2020
Bike Check: Tracey Hannah's Polygon XquareOne DH - Crankworx Rotorua 2020
@Danmcdan: I know exactly what you mean. I like to ride "IN" a bike rather than "ON TOP" of as bike. With a roomier cockpit I feel like I am sitting in the pocket where as smaller bikes I feel are under me.

DaveJube aidanoliver's article
Mar 6, 2020 at 12:27
Mar 6, 2020
Bike Check: Tracey Hannah's Polygon XquareOne DH - Crankworx Rotorua 2020
I'm sure that is an excellent bike but I never liked those boxy swing arms without pivots. The bottom bracket looks like it's part of the swing arm too. I don't think that's the case but I don't know. ALso, I've never heard of those brakes. But I only trust Shimano brakes on my DH bikes. My trail bike I'm not as picky but I usually run Shimano if I have a choice. I do know one thing about that bike. If she is riding it she is going to go much, much faster than I am. It's crazy how fast these top level women really are. When I was a young lad I used to think that I could keep up with the top level pro women...until I started riding DH with some average pro women. They are fast.

I love the ski trails on the mountain.

That is one scary trail!

That's a great shot of the light. It's hard to photograph light but you have done it perfectly
Load more...
69,456 views