Voxran seb-stott's article
Oct 25, 2022 at 6:14
Oct 25, 2022
First Ride: Canyon & Liteville Debut 'KIS' Self-Centering Steering Technoloy - Tech Week 2023
@vinay: Fun fact, the bikes of the city of Lille in France (where there is the biggest Decathlon shop) are produced by them, and they fixed the problems you've noted : integrated dynamo, centered two legged kickstand, smallest and lowest basket.. and integrated headlight in the basket that steer along. With, of course, the same external "self-centering steering technology" aka a coil spring, accessible from outside the frame. But in my example it was the low-priced bike... ;)

Voxran seb-stott's article
Oct 25, 2022 at 2:11
Oct 25, 2022
First Ride: Canyon & Liteville Debut 'KIS' Self-Centering Steering Technoloy - Tech Week 2023
Nice, another thing really easy to access in the frame and maintain in case of a failure... Are the "pros" really better than the "cons" for this solution ? Let me doubt about it for mountain biking.... We find the same kind of solution (simplified) for low-entry city bikes from a big manufacturer in Europe : https://www.decathlon.fr/p/velo-de-ville-elops-520-cadre-bas-mint/_/R-p-145734?mc=8378612&c=BLEU . In that case, people riding those bikes are beginners and not everyday bikers, and having a thing who help to maintain a straight line in traffic is probably a life-saving option in some cases.

Voxran vinknico's article
Sep 21, 2022 at 5:41
Sep 21, 2022
Video: Nico Vink's First Big Bike Jump Line at Royal Hills Bike Park is Now Open to the Public
@scott-townes: Perhaps I didn't get the joke, but the name of the location is in the title & text of this post, soooo... ? And if it's a joke with the Fest Series wanted to keep their events more "private" and less "social-medias oriented", we're not speaking about them here. It's a Nico Vink build and, personally i like this guy and the tracks he build, so I won't go into bashing him :)

Voxran alicialeggett's article
Aug 31, 2022 at 2:21
Aug 31, 2022
French Politician & Retired Judoka Apologizes to World Champs Podium Athletes
@hpman83: They were already so much bikeparks in those years ? I'm suprised but thanks for the information ! I was think of small parks with 2-3 tracks managed by local mayors.. And yes I was think of that local scene that produce so much talented riders !

Voxran alicialeggett's article
Aug 31, 2022 at 1:00
Aug 31, 2022
French Politician & Retired Judoka Apologizes to World Champs Podium Athletes
@hpman83: That's right, we have a lot of bikeparks ! But I think a lot of them opened only recently (in the last few years) because of the lack of snow and the need of rentability for snow lifts, and perhaps the need to attract some tourists for local shops. (I know that some lifts are managed by the cities, so it's a win-win situation when shops are open, and lifts attracts tourists). And I don't think we can count on them for the actual french domination in downhill (where they opened when Bruni/Vergier/Pierron started downhill ?). But it will surely count for the next generation ! We can't also count on our french bike federation (FFC).. Until recently they were only aware of "road bikes" and sometimes "cross country bikes"... (I did have tried to organise downhill races with official status, and they were completly lost about our discipline). I do think that our domination comes from the fact that other disciplines (BMX race) where a beautiful lauching pad for some athletes, and some volunteers people in France are really passionate, tries to step-up the game in sports, supports the athletes like no one else, and loves what they are doing. And we have a lot of chance to have all of them in every little town to help young people to discover sports, maintain the local spots, etc... :)

Voxran edspratt's article
Aug 29, 2022 at 13:15
Aug 29, 2022
5 Things We Learned from the Les Gets DH World Champs 2022
@weeksy59: We're pretty good when it comes to do stupid things for some coverage. Even more when we have a chance of going big in the results and have moooore coverage ! 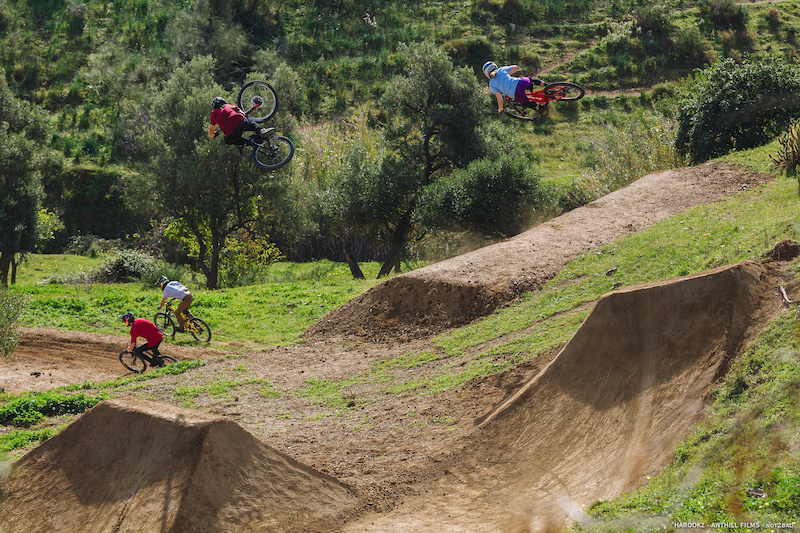 First Look: Lal Bikes' Supre Drivetrain Splits The Derailleur In Half Before It Happens On the Trail
10 Nov 2021

Video: High-Speed Freeride On Dreamline
15 May 2018