Nov 16, 2010 at 21:42
by Lee Lau
Tweet
Part 1 of this two part series focused on the GoPro chest mount. Part 2 explores some options for using the GoPro mounts, or making your own mounts to expand point of view options and allow you to shoot more interesting video. 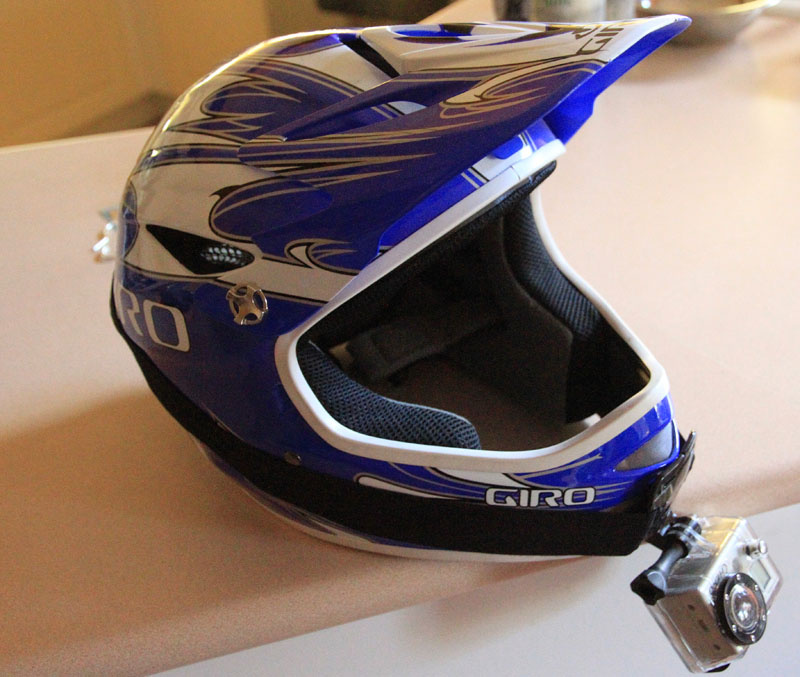 By taking one strap off the otherwise relatively-useless-for-biking headband mount you can turn the headband mount into a nice mount for use with full-face helmets. The beauty of this mount is that the camera is now lower on your body and you can easily get the handlebars and front wheel in the video. However, you still retain the ability to turn your head towards whatever you're trying to film. This gets you the best of the chest mount with the best of the helmet mount.
GoPro's popularity means there are now quite a few people who've come up with creative ways to mount the camera on bike and body. I'll show you some ideas of mine and many ideas from other people. The beauty of these different angles is that it gives you an easy way to mix things up in video. Instead of just the same old video of trail in front of you, you can mix up different points of view. Your limit is your imagination.

These mounts can be built or used by purchasing accessory mounts from GoPro; for example:

... and sometimes it's just a matter of using tape, zip ties and some faith!

I think this video angle is really good. Here's a video shot using that angle (unfortunately it's the SD older Hero Wide, but you get the idea).

Bootleg Canyon from Bryan on Vimeo. 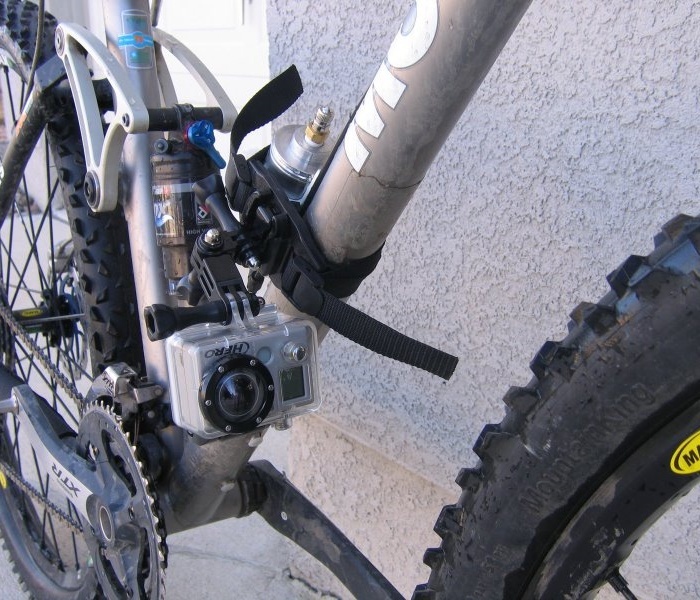 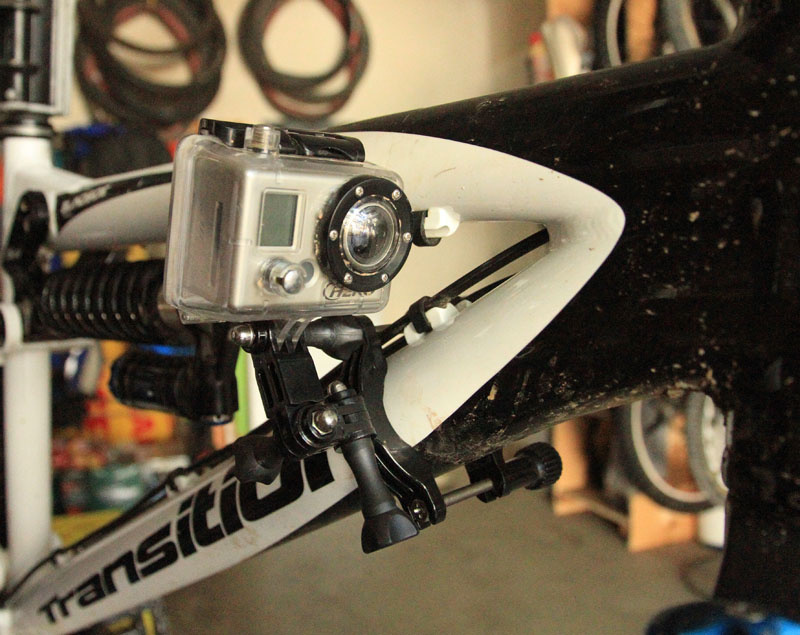 This mount is the Roll Bar Mount. Realistically it can only be used on open trails; in tight trails you'll hit the camera with the handlebar. It'll only worked with bikes with top tubes that let you push the GoPro forward enough that your knees won't hit the camera. Of course, don't tighten the mount too much so if you do hit something you won't shatter the plastic mounts 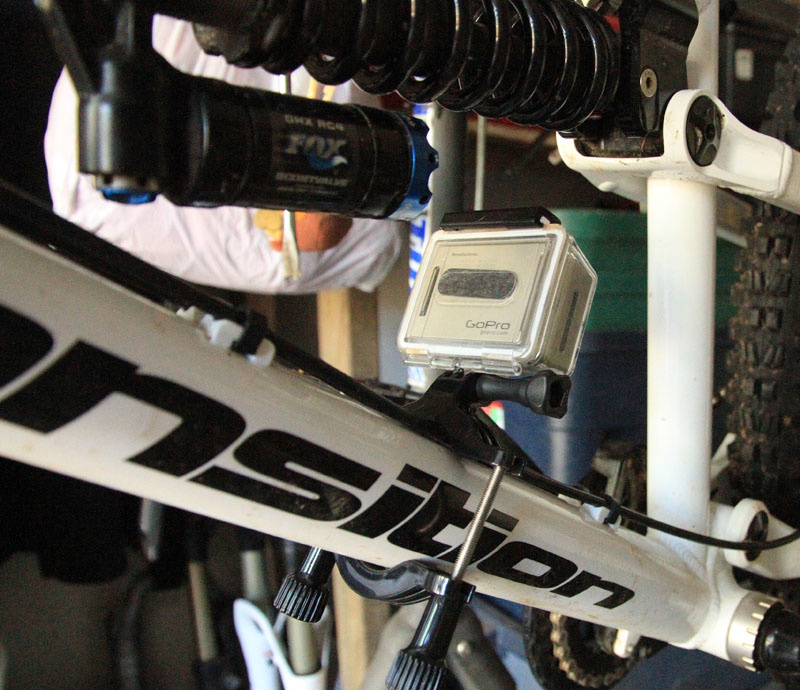 Roll Bar Mount (could as easily be Vented Helmet Mount or ziptied GoPro. Very cool if you're riding skinnies
Here's an example of some of those creative angles I was talking about. Josh mixes up different angles beautifully to capture the trail; you really get a sense of the flow - right up to the moment when he eats it and knocks himself out - ugh!

Narwhal Cam
This next mount is so cool and potentially so maiming that I thought it deserved its own section. It just goes to show how creative you can get. Other people have done this, but no-one else has explained it so well or done it in such a budget ghetto fashion (I mean this as a compliment). The video is self-explanatory:

Unicorns and Narwhals on Teton Pass...Vain Cam! from Andrew Whiteford on Vimeo.

>
Andrew's explanation on how he did this: I took an older 150cm ski pole, cut off the basket end and took off the grip. Bent the grip side end of the pole to match the curve of my helmet, and screwed it into my helmet with some hose clamp type mounts. Increasing the diameter of the camera end of the pole with duct tape, I used GoPro's handlebar mount with the cam hanging upside down, facing back. Finally, added an L bracket off the back of my helmet to add a counterweight- in this case I used two Princeton Tec bike light batteries. 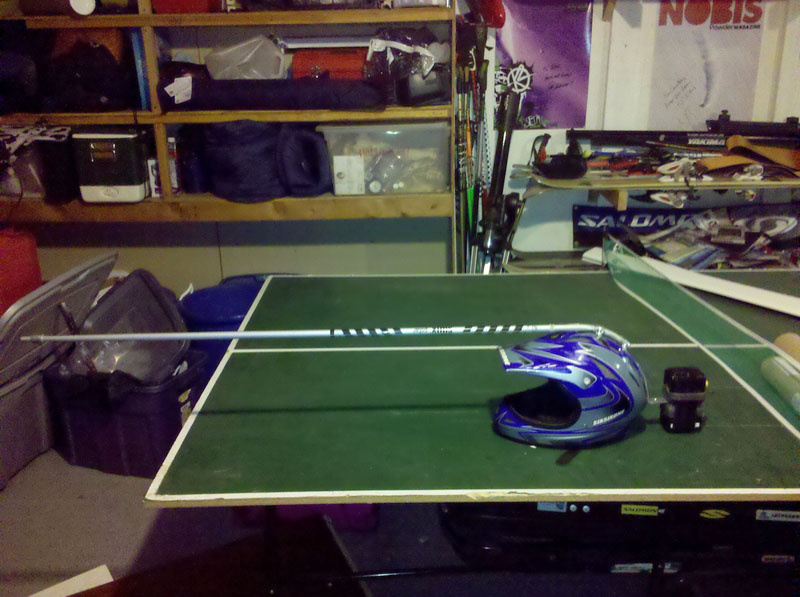 Yeah this looks dangerous. But we're biking, not basket-weaving.

Swiveling 360 cam and follow cam
Here's another mount that is incredibly original. PLEASE NOTE THAT IT ISN'T MY IDEA - read the notes below if you have questions. It probably won't work in areas with tight trees, but it showcases creativity, determination and crafty implementation In fact, take some time to watch the entire video, it has frame mounts, follow-cams, swiveling 360 head mount cams, chest cams, helmet cam; it's an incredibly well done package:

In Phillip's words this is how the mount is made - click there to read how he achieved all the various filming points of view. 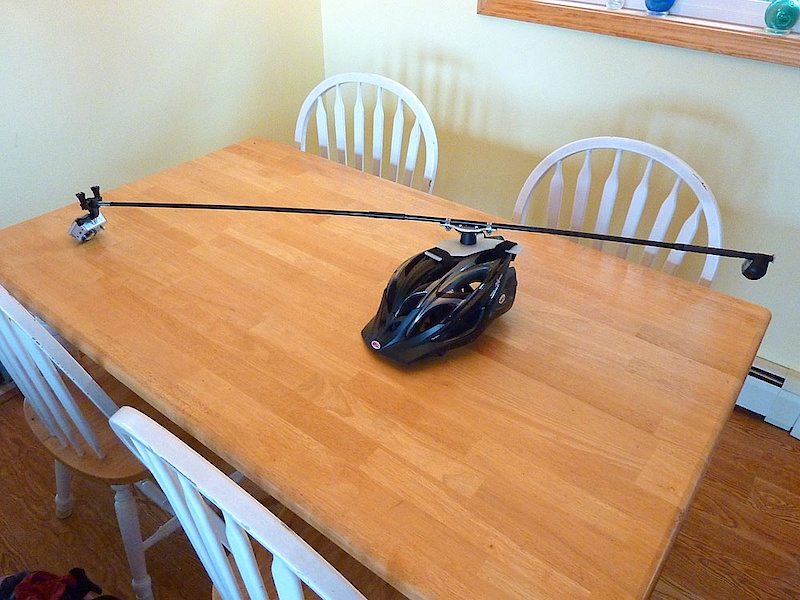 Looking to pick up a Go Pro of your own - Buy one here!


Who else has cool ideas or interesting angles? The more duct-tape and zip ties the better! Share them with the rest of the world by putting your creations down below!

Narwhals Narwhals we are narwhals~! inventors of the shish kebab...

Cmontjumper (Dec 15, 2010 at 6:43)
narwhalls are very hard to ride with... i had one 3 feet out and a waterbottle as the weight in the back cause u could add and empty water depending on how it felt.. but your head feels really heavy and the helmet slides down over your eyes sometimes even if the helmet is tight

the-biking-whyking (Dec 15, 2010 at 15:45)
the gnarwhal is definately my favorite, you really can see a lot of the trail and get a good sense of the riding, as well as you can see exactly what the rider is up to. They're all cool, makes me wanna get a gopro and play around!

leelau Plus (Dec 15, 2010 at 16:06)
Really happy about the reception to this article and stoked that everyone's as happy with the creativity as I was. Seems to me there's enough GoPro's around in the hands of really creative people so there's now a critical mass of people who are getting really cool ideas about how to mount the GoPro's and generate some unique footage. I'm definitely happy that its inspiring readers. Nice

boardgabe (Dec 27, 2011 at 11:44)
The footage from the narwhal is sweet, but you are right, that can get you killed really quickly. If anyone else builds this make sure it has some breakaway mount. You don't have to be a medic to realize if you get that caught on a tree or go over the handle-bars then you will snap your neck. Being exteme and being stupid are cousins.

emarquar (Dec 15, 2010 at 2:02)
You mean a 3rd person view? Yeah, that would be great. I mean, it'd be a little harder to handle with it sticking out behind you, and the counterbalance would have to be mounted on your face... Would be epic though.

Actually, that's basically like the 360 one in the last pic. Hmmm...

david-hill (Dec 15, 2010 at 2:54)
not sure a '3rd person' view is really nessecary. i spose if you're riding on your own then it makes sense, but any other time you can just get your buddy to ride nice a close behind you using the camera as a normal helmet cam, what it was designed for. i guess this doesn't really give the 'moving with the riders head' feel, but it's close enough i think lol

bigbluebike (Dec 15, 2010 at 4:09)
yeah but with the moving with the rider head you get that cool effect, and also when doing whips and stuff and railing corners it looks rad as!

vt6spd (Dec 15, 2010 at 4:12)
Awesome article. I love the Go Pro products and these mounts are sweet. NARWAL all the way! The 360 mount is funny. Maybe we could make one that is remote control with a wireless connection to a laptop so we can watch in real time but rotate the camera on que. Or maybe we could take the Narwal, reverse it so we can see the people behind us? Foglequist- Jack this means you- let's see it!

SHARK555 (Dec 15, 2010 at 1:42)
i really like the fork mounted ones or the rear stay mounts. give a cool view on what the bike is doing as you ride. and the that solo guy, ride with a buddy, cause not remembering whats going isnt very good!

taletotell (Dec 15, 2010 at 8:58)
The title had me confused. I thought it said "go procreative, mounting options". I was somewhat surprised for a second!

nomorepb (Dec 18, 2010 at 22:23)
I did not steal the idea.Its was my idea.did you see eny pic with the Go Pro under the BB.The answer is NO.so it was my idea.because no one dare to put the camera under the BB because is danger amigo.so I did it and the video ti look GREAT.anyeay thanks for you comment.

epavichthesavage (Dec 15, 2010 at 14:31)
pfft look at this, all i need is ducttape and some sticks and i can make a mount right then and there, no fancy plastic needed...

louckser87 (Jan 2, 2012 at 19:21)
Great post with some excellent GoPro mounting ideas! We've got them posted on our GoPro forum: a href="http://www.goprofanatics.com/">GoProFanatics.com GoPro Forum/a>

ProGoStick (Jan 19, 2012 at 18:26)
Check out our website and you can buy an extreme monopod designed specifically for the gopro cameras! ProGoStick.com

and that vain cam os class, I want one,

mountguitars (Dec 15, 2010 at 16:40)
can't wait to try some of these mounts. i wish they featured this article before fall or winter came.

estebangomez00 (Dec 21, 2010 at 19:22)
any help on how to make the narwhal mount without that much weight or drilling to the helmet? thanks

sopromounts (Feb 1, 2015 at 20:54)
Check out our mounts at www.sorpomounts.com, easy solution to your true POV DH footage

vycious (Dec 15, 2010 at 14:00)
Take the narwhal and unicorn idea and mount it behind so you can see you as a rider and the terrain, video game stylee!