mtbstrengthcoach mtbstrengthcoach's article
Oct 12, 2017 at 8:36
Oct 12, 2017
Transitioning Into the Off-Season - A New Training Series
Thanks, glad the programs are working for you. But like I always say, I just provide the direction, it is your hard work that is getting you the results. Keep it up and ride strong!

$1500 USD
This is the same bike that Ross Milan rode to victory at the last 4X National Championship won by the legendary Yeti Cycles Racing Team. With several “pro” touches like an XTR rear derailer with the shorter cage from a Saint plus a rear shock marked for the Yeti team from the Fox Racing Shox factory this is one bike that will stand out from the crowd. I got it as payment during my last year of working as the strenth coach for the Yeti Factory Racing Team and after riding it some for a year I’ve had it put away for the last few years. It has barely been ridden in the last few years, been well cared for and has a lot of life left in it. It features a top of the line build - Frame: Medium Yeti 4X Fork: Fox 831 Shock: Fox Float RP23 Stem: Thompson 50 mm Bars: SunLine 745 Headset: Chris King Shifter Pods: XTR Brakes: XTR Shifter: XTR with Saint Short Cage Grips: ODI Yeti Team Grips (same grips used by Ross Milan) Seatpost: Thompson Seat: WTB DEVO custom Yeti Team Colors Cranks: Saint Chainguide: MRP G2 Wheels: DT Swiss EX500 Pedals: I’ll let you choose what color Pedaling Innovations Catalyst Pedals you want 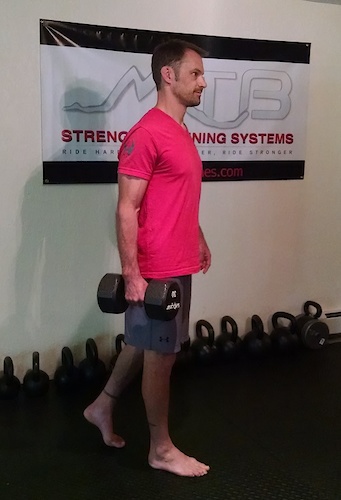 mtbstrengthcoach mtbstrengthcoach's article
Jul 18, 2016 at 11:30
Jul 18, 2016
Why You Need to Crawl Like a Baby to Ride Like a Man (or Woman)
@Eastbournemtber: I never said anything about "core training", I wrote about crawling. In fact, I even said in the article that "core training" isn't enough and I agree with your assessment that most core training is a worthless fad used to sell training. However, crawling is not the same thing and none of the stuff your referenced actually refers to crawling. The idea that sport training causes imbalances in the body is also not new, there is an old saying that "where good sport begins, good health ends". There is a difference between "fitness" and "health" and using training as a way to restore balance to the body is something good coaches have been doing for a long time. Even the ancient Greeks recognized the need for this - Socrates used to have his throwers practice with both hands as a way to keep balance in the body. This article is base on my own experience working with riders at every level of the game (how many WC pro riders have you trained?) and what I have learned from coaches like Dan John, Stuart McGill, Gray Cook, Mike Boyle and Tim Anderson to name a few. If you look into it you will see that crawling is being used by a lot of high level coaches and teams to help keep their athletes healthy and performing well. I could be wrong but it seems like you never read the article itself and instead saw the words "core training" and went off on your anti-core training talking points. Nothing you wrote has anything to do with what I wrote and so there is nothing for me to respond to other than to point out that you missed the entire point of the article. But, of course you won't admit this and will instead write another few hundred (thousand?) words missing the point and trying to put words in my mouth so it isn't really you I'm trying to convince but the people reading this who might be mislead by your multitude of words that mean nothing in reference to this article.

mtbstrengthcoach mtbstrengthcoach's article
Dec 22, 2015 at 15:53
Dec 22, 2015
Mace Training for Mountain Biking: Hindu Warrior Training for the Trail
I think that they are better than nothing but they are not as specific for mountain bike grip strength and the Mace 360 or KB Swing. The reason is that grip strength is specific to how you build it and the type of reactionary grip strength you need on the bike is different than the constant grip strength you need for those devices. The hand position is different as well as the fact that you are moving your hand/ forearm to keep the ball going, none of which resembles the grips demands of mountain biking. Again, they are better than nothing than but unless you are adding them in because you are bored and have the time to kill I can think of a lot better use of your training time. You could also do some Brazilian Jiu Jitsu or indoor rock climbing/ bouldering as a great way to build your grip strength endurance.