scbullit36 aidanoliver's article
Mar 6, 2020 at 7:37
Mar 6, 2020
Bike Check: Tracey Hannah's Polygon XquareOne DH - Crankworx Rotorua 2020
It doesn't look good but I would say, from what I've read, this bike is on the top of my list of bikes I want to try. I would have to try it first though...based on looks alone, I don't think I could justify the spend. But if it rides like even half the reviews say...it would be worth the money.

scbullit36 aidanoliver's article
Mar 5, 2020 at 9:58
Mar 5, 2020
Tech Randoms Part 2 - Crankworx Rotorua 2020
@big-red: Yeah, I guess I can agree with you on that. I did read that article about the Cycleworks bike and it does sound like that setup works better than the Trust fork...so...a linkage fork (not Trust) could be better than a telescoping fork but in the case of Cycleworks...it comes at a cost of not being upgradable or transferable. But yeah...that Cycleworks setup, based on the review, sounded like it worked really well.

scbullit36 aidanoliver's article
Mar 5, 2020 at 7:49
Mar 5, 2020
Tech Randoms Part 2 - Crankworx Rotorua 2020
@DavidGuerra: I've never ridden a Trust fork. I've seen the trust fork in person and I have bounced around on it in a parking lot but I've never ridden one on a proper trail ride. That being said, I cannot speak to the direct steering feel of a Trust fork compared to a telescoping fork. I have, however, ridden a linkage fork before. Back when I was much younger, I used to have a Pro Flex...which came stock with a linkage fork. I had a newer one so it had a coil shock and not that janky elastomer. What I can say is, not only did I notice no difference in stiffness (or suppleness) for that matter, compared to a telescoping fork, but the linkage fork broke within the year. I rode through a g-out compression on the fork and it buckled the fork leg. I'm sure the Trust is stronger because it is carbon and technology has come a long way but...just sayn. Also, like a linkage frame, if I wanted to keep the pro flex fork running smooth...I had to take it apart every 6 months...but in fairness...it pivoted on bushings. With regard to the stiffness thing...that isn't always necessarily a good thing depending on what you are riding. The Manitou Dorado...which is a proper fork...and I did own one for a couple years...is built on the concept of torsional flex. The reason for that is...it tracks straighter because your front wheel glances off impacts instead of transmitting them to your handlebars. I'll tell you...the fork worked really well and it was far from the stiffest fork I've ever used.

scbullit36 aidanoliver's article
Mar 5, 2020 at 7:39
Mar 5, 2020
Tech Randoms Part 2 - Crankworx Rotorua 2020
@big-red: The down side to the Cycleworks setup is...you're stuck with that bike. You can't put another fork on the Cycleworks bike and you can't put the Cycleworks setup on a non Cycleworks bike. Personally, I think bike manufacturers getting into the suspension game is a slippery slope. Lack of buyers ability to pick what they want to run could alienate certain brands. Furthermore, you would have to rely on the manufacturer innovating their product further to keep up with the times. Imagine if you were stuck running a 2001 Boxxer because it was the only thing that worked on your frame...

scbullit36 aidanoliver's article
Mar 5, 2020 at 5:45
Mar 5, 2020
Tech Randoms Part 2 - Crankworx Rotorua 2020
So...this is going to be harsh...every article I have read about the Trust fork suggests it is not a good performing fork. Literally every article I have read suggest the fork travel does not work when landing off of a drop rear wheel first and force is transmitted directly to the rider...this is an event that happens on nearly 100% of a mountain bike ride. For the price of that fork, it should do everything well period. Secondly, the fork looks hideous and their 180 mm travel version looks worse. Putting that fork on the Hope HB130 is almost blasphemy. Any bike this fork is installed on, immediately looks worse. I really think this fork is for people...not all that good at riding...with a lot of money...who want to roll up to the trail head and generate conversation or post their hideous looking bike on social media. There is tech that should be developed in the bike industry and there is tech that should just die out. The Trust fork is an example of the later. I mean...telescoping suspension forks on 2 wheeled vehicles dates back almost 100 years. They are to bikes what round wheels are to anything that rolls...and are really damn good as of late. Why try to reinvent the wheel with this thing? That doesn't work well and costs as much as most carbon bike frames. scbullit36 mikekazimer's article
Mar 2, 2020 at 10:02
Mar 2, 2020
Review: Banshee Titan - A Friendly Beast of a Bike
I'm only speculating here but...The reason you aren't seeing reviews on playful bikes with smaller wheels is because the Industry is going away from smaller wheels. I do think 27.5 will be around for a bit longer but I do think 26 is officially dead as it relates to a trail or DH bike....maybe Kids DH bikes will have 26" wheels. The reason for this departure is likely because...many of these companies rely on actual racer feedback to develop their frames...this is part of the reason bike companies bankroll these guys...to provide some other value other than win races. That being said, racer feedback is based on how they feel on a bike as well as actual data collected on a controlled course. At the end of the day, 26" wheels cannot compete or win races...especially not at a WC level. 27.5" wheels also struggle when compared to 29" wheels but there are rider size limitations that prevent some people from riding a 29" wheel bike...I think this is why companies are playing around with mutt bikes. In any case, as the old adage goes, "Win on Sunday sell on Monday". Bike companies aren't making bikes that are easy to whip so people can post cool whips on instagram on their fresh 26" bike...Bike companies are making bikes based on racer feedback and data. Combine that with the fact that...0.1% of us can ride like Brandon Semenuk and racing bikes is much more accessible to the average person when compared to riding down a slopestyle course. 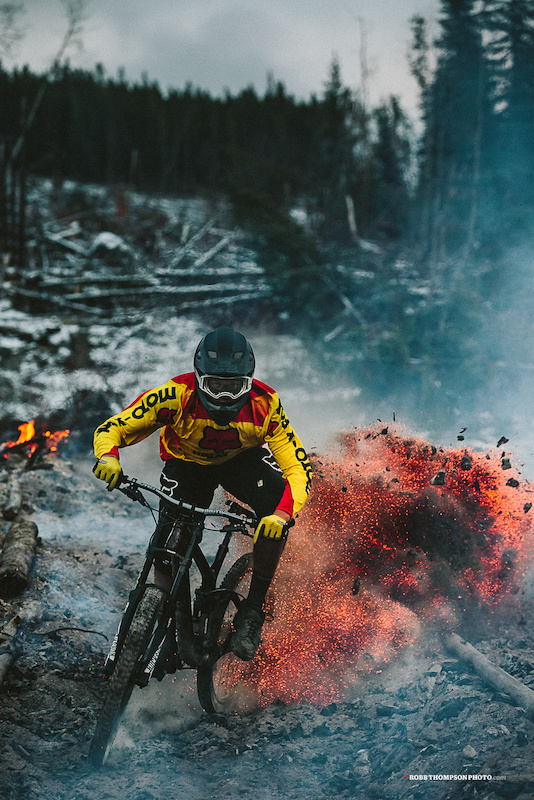