shlotch VorsprungSuspension's article
Aug 4, 2020 at 13:46
3 days
Vorsprung Introduces the Secus Air Spring System
@VorsprungSuspension: Sorry to be off-topic, but could you give a quick explanation as to why the new debonair spring dives further under braking? Is it due to the reduced negative chamber? I read all the glowing reviews of the new spring and, as a proper mountain biker with an insatiable need to be told I need new stuff, I put it in my fork. And the fork become noticeably 'divey'. Naturally, I assumed I was just setting up my fork incorrectly or that I just need to learn to ride a bike. Particularly given that it was claimed to ride higher up in the travel with the new spring. Either way, I went back to the old spring.

shlotch VorsprungSuspension's article
Aug 4, 2020 at 11:26
3 days
Vorsprung Introduces the Secus Air Spring System
I like pooping on weird bike stuff as much as the next guy, but Vorsprung consistently produces worthwhile, well thought-out products - emphasis on the 'well-though-out'. In the NSMB article they talk about the flex built into it and how it is designed to respond in the event of an impact. I think it's a case where wrecking threads by smashing this thing would be similar to wrecking your chainstay threads by smashing your derailleur. In both cases, there is a part or an element designed to be the failure point before that happens. If it were some gimmicky company, I'd agree, but if anyone deserves the benefit of the doubt it's Vorsprung.

shlotch dan-roberts's article
Jul 8, 2020 at 8:49
Jul 8, 2020
First Look: DT Swiss' New 1501 & 1700 Spline Wheelsets
@vinay: Good call, you're totally right. I went and watched a video on the process at DT and all it really seems to do is simplify the lacing by allowing all spokes to be installed before adding the rim - they don't flop into each other or force you to do one row at a time. So builders can completely separate those two steps. How much that helps is beyond me :)

shlotch dan-roberts's article
Jul 7, 2020 at 16:15
Jul 7, 2020
First Look: DT Swiss' New 1501 & 1700 Spline Wheelsets
Those 1700s look like great wheels. Though I may be biased given that I just built a wheelset of EX511 rims on DT350 hubs. More proof that I'm a basic bitch. Though my one gripe is that I wish DT would stop pushing straight-pull 28-spoke so much. I imagine it's a decision on what works best from an automated building process and not necessarily what's best for the end-user. It's a bit nit-picky, I know, but the lack of 32 spoke J-bend options is what has led me to build my own wheels as opposed to going the pre-built route in the past. 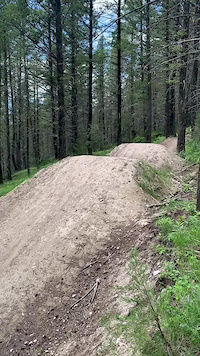 shlotch jamessmurthwaite's article
Jun 27, 2020 at 22:46
Jun 27, 2020
Video: Claudio Caluori Takes a Run Down the World's First Fully Electric Built Trail
Only because I just got home from working on a trail with a shovel and pick.

shlotch COMMENCALbicycles's article
Jun 22, 2020 at 12:16
Jun 22, 2020
Commencal Unveils 2021 Meta AM 29
@jzPV: fwiw I find the Madonna more lively and nimble than the (comparatively small) Norco Range I was riding previous. Thing feels like a 160mm dirt jumper on rough tracks and I can't get my head around it. I don't understand this black magic...
Load more...
4,263 views