Im gettin too old for this shit!

simeon10 microshift's article
Jul 21, 2020 at 0:44
Jul 21, 2020
MicroSHIFT Announce Updates to Advent 9-speed Shifter and Cassette
I got my 10speed 11-48 last week, but I had to import it from Australia, then pay tax on top of high shipping. it cost as much as a 12 speed XT in the end. It's ok so far, pretty solid but doesn't shift as quick as Shimano - or Sunrace which this replaces, it would have been killer at the msrp but I couldn't get it at that...

simeon10 mikekazimer's article
Apr 9, 2020 at 9:16
Apr 9, 2020
First Ride: RockShox's Updated DebonAir Air Spring - Pond Beaver 2020
@RockShox: when are these available? I just checked all my usual suppliers from all over Europe - nothing, RS website: upgrade kit - 404 page not found! any news on where I can get one?

$750 GBP
2010 second gen Disco. ULTRA RARE Bombproof huck machine and versatile park weapon. Since I've owned it (2016) it's has a full strip down and powdercoat as close to one of the factory colours as I could get - originally it was black like Will White's rampage disco - the finish is still very good, some scuffs from the lifts but not much. It does have a dent each side of the top tube from the fork bumper hitting it. This is because the bumpers weren't placed to hit the lower gussett, its never bothered me and it doesn't affect anything. The decals were commissioned by me and good quality, as at the time I rebuilt this frame there were none available anywhere in the world. I have listed it as a Medium, when I bought it it was advertised as a large, but these were a compact design, specially made to huck off the roof of your house. The links were all re-anodised and are mostly still in pretty good condition, there are some marks from tool adjustment as you would expect. The upper and lower eccentric bushings have both been helicoiled and are now both stronger than stock (I did the upper bushing the first owner did the lower), I will Include a bottle of loctite bearing compound, a small amount of this on the bushings prevents them from moving, this essential with this design and can be removed with a craft knife and reapplied. I have replaced all the hardware bolts and used long stainless chainring bolts for the pivots. The lower link bearings were replaced a few rides ago and ar good as are the other bearings. I have some new replacement stock which I will include in the sale. The Saint bottom bracket is included, the drive side is pretty much as new, very smooth, the left side is a bit rough but still useable - I only ever change bearings if there was a need to. The Cane Creek head set is included, one bearing is good one is a bit rough but still useable. The Shock is included it's a Marzocchi Roco WC, this was new when fitted. The bike has been ridden about a dozen lift days a year for three years, I think the shock has seen about 25 hrs actual action and it still feels great, I don't think it needs servicing. The decal has rubbed on the link where I decided to set the suspension up in a position it wasn't supposed to be! It's fine but it could be touched up, other than that its in vgc. It has a 650lb RS spring on it right now but I do have a 550 and a 600lb, if either are of interest let me know.

$15 GBP
Thor Jersey size XL, used but not for a couple of years, having a clearout, no rips and plenty of life left Troy Lee Designs Jersey, no rips vgc
Load more... 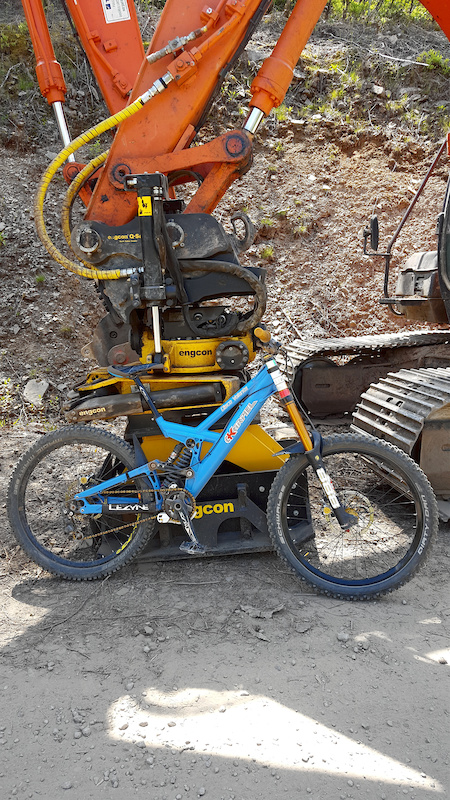