Photographer and Videographer at Norco Bikes

@LarusFuscus: no flash on this one, I very rarely if ever shoot with flash. We used a carefully positioned smoke machine to create the light foggy background which made Ali (the rider) pop, creating strong contrast between his dark riding kit and otherwise dark background trees. The angle of the front wheel is just right to catch the light!

Yep one of mine, my favourite from the Range VLT shoot. Cheers dude!

$5000 CAD
*Please read ad in full before contacting me if your interested. 90% of questions can be answered by reading the advert!* 2019 Norco Range C9. This was my trail bike for the 2019 riding season XL frame suits riders around the 6' to 6'6 range 29inch wheels Carbon frame and seatstays Spec: Fox 36 factory kashima forks Fox DHX2 shock. Can come with either the 450lb spring pictured or a lighter 400lb spring, your choice Rockshox Reverb 175mm dropper post with newer style 1x paddle lever Sram GX Eagle 12speed drivechain, 50T cassette, 32T x-sync narrow wide chainring Sram GX DUB cranks 175mm Sram Code R brakes. Current brake pads are at about 40% life left, will give the new owner 2x brand new pads as well E13 TRS wheelset with Maxxis Minion tyres. Front tyre is almost new. Rear tyre is at about 60% life left. Sram Descendant carbon bars Sram Descendant stem 50mm WTB saddle E13 top guide chain device Bike is in used but good condition. All components work as they should, the suspension was serviced mid summer so still feels plush and the drivechain still shifts with no issues. I have a downhill bike so this Range never saw any park abuse. The top tube, down tube, headtube, seatube, chainstays and seatstays were all wrapped in 3M protective clear tape since the bike was brand new. If you look closely in the pictures you can see the different layers of tape. The underside of the downtube also had the extra thick protective tape that comes with the frame on top of the regular 3M. There are some scuffs on the frame, a few small scratches that have gone through the tape and some rub marks on some of the components, but nothing more than expected from a used bike. The picture of the downtube with the brown marks on is where the tape has scuffed up from being in the back of a truck. The rear rim has a few dings in it and has a very slight wobble to it but still runs strong. Its a really minor wobble. Overall the bike is in great working condition and ready for its new owner! Feel free to message me via pinkbike/text if interested or have any unanswered questions. The bike will NOT come with the pedals, bottle cage/bottle or One-Up pump $5000 OBO Cheers Tom

tomivorrichards norcobicycles's article
Sep 13, 2019 at 11:40
Sep 13, 2019
Video: Norco Bicycles Announces New Range VLT E-Enduro Bike
@jclnv: Just out of interest, have you ridden one of the new crop of ebikes (range vlt, sight vlt, turbo levo etc) on a proper ride? I have and I can say for sure it was not a lazy ride! I was pushing just as hard on the climb as I would on my regular bike, the difference being I was going 4x the speed uphill in 7/8th gear vs. spinning up in 1st/2nd/3rd. If anything I probably pushed harder on the climb on the e-bike because it was such a novelty going uphill so much faster than usual, I wanted to see how silly fast I could go. I was sweating at the top the same as I would be having climbed up on my regular bike. You realise you still have to pedal them right? Theres no throttle, they are not even close to motorbikes. Once at the top you drop in and its just like riding a normal trail bike, albeit a heavy one. Also I did 3 laps of the trails in the same time it would usually take to do one...not because the ebike made it so easy but because the ebike made it so fast! I can say for certain I got just as much if not more of a workout in than on my regular bike. More riding in the same quantity of time is a huge bonus for most people who try to squeeze in riding around a busy work/life schedule. Finally, before you dismiss this all as someone blinded by love for e-bikes...I do not own an e-bike, but I have put in time on a couple and understand what they are all about. They are not just for lazy/old/crippled people. This is probably all falling on deaf ears...my point is don't hate if you don't understand what they are or haven't even tried one out.

tomivorrichards norcobicycles's article
Sep 12, 2019 at 18:04
Sep 12, 2019
Video: Norco Bicycles Announces New Range VLT E-Enduro Bike
Thats just the range extender battery your talking about, which is an optional extra you can purchase to increase the range/battery life. The main 630wh battery is hidden in the downtube completely out of sight. Most people who buy this bike probably wont buy it with the range extender straight away, so thats how the bike will look to them. 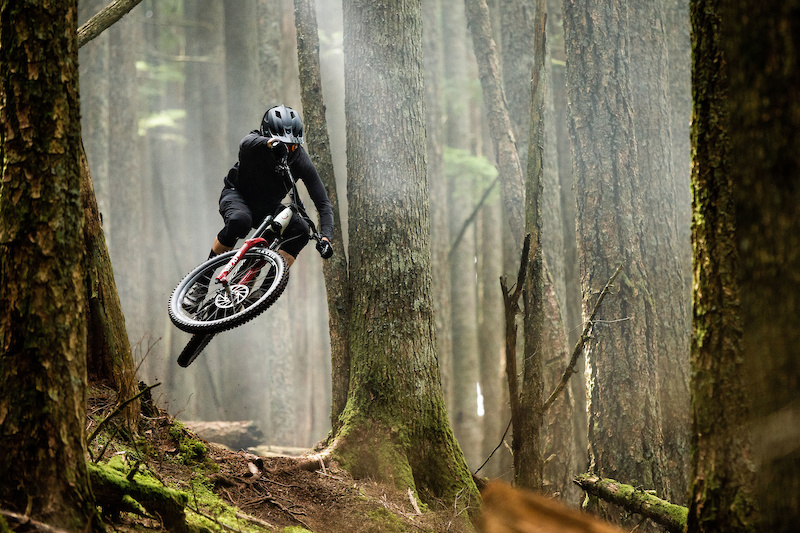