Competitive Mountain Biking Around The Globe: World Championships 2019 by the Numbers 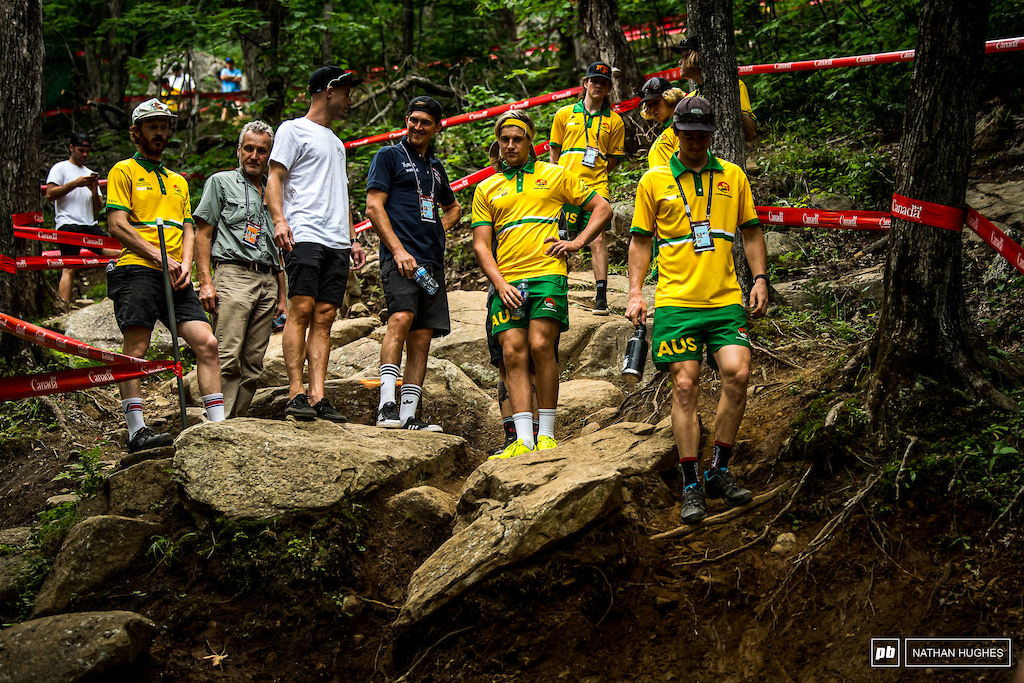 This week, 629 athletes from 46 countries have descended on Mont Sainte Anne to try and prove that they are the best mountain biker in the world. Unlike a normal World Cup weekend, riders' travel and accommodation will probably be funded by their national federation so we'll see a different field to what we're used to week in, week out. There are probably fewer athletes than at a normal doubleheader weekend but they come from a greater spread of countries and with a greater spread of abilities too.

We looked through the entry lists to find out where the riders are coming from and work out what that tells us about the state of competitive mountain biking.

This year every continent but Antarctica is represented in the entry lists but Europe still dominates the entry numbers with more than half the athletes at the World Championships (326) coming from there. North America takes the next spot followed by Oceania and South America. Asian and African athletes are in the minority, with fewer than 20 athletes each. 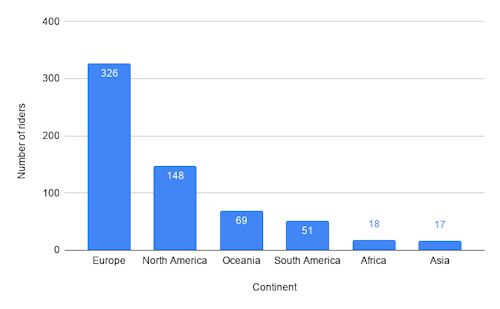 If we break it down by discipline, we can see that Europe still dominates in every field. Downhill seems to have the smallest gap though, especially in the juniors where Europe doesn't seem to have as dominating a presence. Maybe in the future we won't see such a big gulf between Europe and the other continents as this generation comes up. 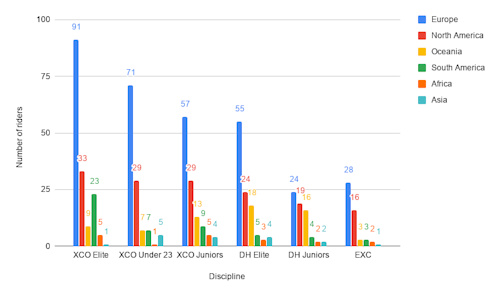 But what about the individual countries? Well, that's a total change with Canada, on home soil, managing to summon 73 athletes to represent it and the USA just behind it with 56 competitors. There are some surprises here though, who would have expected New Zealand to bring a bigger squad than Australia, or Germany to have a bigger squad than Great Britain? 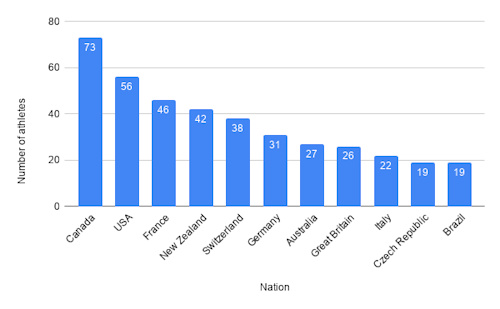 At the other end of the scale, there are five nations that have brought only one competitor - Ukraine, Sweden, Luxembourg, Iceland, El Salvador - and two countries that have just a pair of athletes - Namibia, Romania.

Below is the breakdown of the top five biggest nations in each discipline. With Canada maxing out their quota in almost every category, they come out as the biggest nation in cross country and in downhill followed by the USA. The only exception is the e-mtb race where France brought over the most athletes.

Time to look at who is racing what. XCO dominates the rider numbers with 94 riders in the men's field, 68 in the women's field and then a further four categories of junior riders and two ebike categories to pick from. In total that gives 404 XC riders compared to just 174 DH riders.

These fields are also much smaller than you would typically find at a World Cup. At the last round in Lenzerheide, 115 elite men entered the XC and 141 entered the downhill. European events typically attract more riders than North American ones but the gulf here is still significant regardless, especially in the downhill. 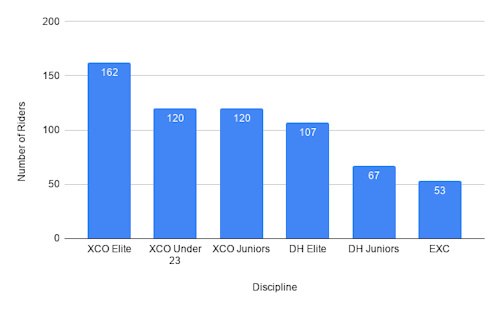 XC attracts riders from the greatest spread of nations, which makes sense as it also has the biggest number of riders. Downhill seems to be a lot less diverse with only 23 different nations racing in the men's field and 15 in the women's. 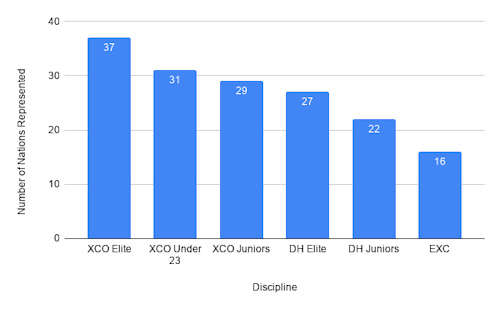 The biggest gender split comes in EXC, where only 8 women entered compared to 45 men. In fact, the women's field was so small that the UCI had to change the running order of the day and allowed the women to train with the men and moved forward their start time to 1 minute after the men. 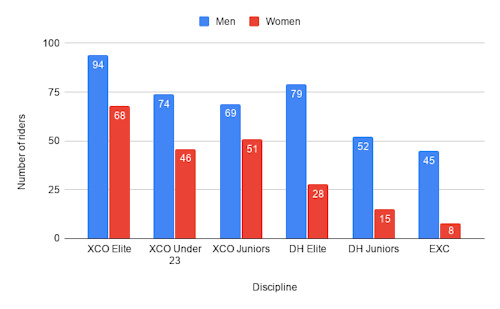 Jamminator (Aug 30, 2019 at 16:18)
Depending how you break it down, Europe potentially includes 40+ countries. North America is just three countries. Seems moot comparing oranges to apples under guise of similarity.

pcmxa (Aug 30, 2019 at 17:11)
I'm, there are 23 countries in North America. But sure only 3 with populations and economies where you might expect World Cup participation (in biking)

I'm sure the Bahamian national squad is ready to tear it up this weekend after a long season of pedal boat training. Yes, I'm being facetious (shout-out to Eddie in Eleuthera).

I hope the UCI realizes there is an untapped market out there. And the confederations of Africa and Asia need to think out of the box to grow the sport much much more in their respective continents.

tacklingdummy (Aug 30, 2019 at 20:27)
In Asia, MTB is starting to really grow, but it will be a while before they have world class riders. Limited gnarly trails to train on like Europe and US.

gnarnaimo (Aug 31, 2019 at 8:53)
@dubod22: In his defense he's likely right.. However there's no shortage of gnarly terrain and potential for gnarly trails.

tacklingdummy (Aug 31, 2019 at 8:57)
@dubod22: Yes because mtb is not very popular. So, they don't have many mtb parks or build trails for mtb. In China, there is only two mtb parks that I know of and both are not very gnarly. Brave Peak bike park in Hangzhou, China and Daray in Zhongshan, China. Japan and Korea are the same.

Vast majority of trails are hiking trails because hiking is extremely popular there. It is starting to change, but the mtb industry, popularity of mtb, and level of riding is still way behind.

gonzoracing (Aug 30, 2019 at 15:23)
And that my friends should you think represent UCI voting entitlement. But no, at this pinnacle of the sport and UCI's mission you will see some very enabled voting, event and approval voter blocks, not at all represented by above analysis. Neither is it due to the discipline, which again is fairly typically tied above to other cycling types.

kipvr (Aug 30, 2019 at 15:17)
I don’t think it is surprising GB’s squad is smaller than Germany, because of British Cyclings attitude towards MTB, and we’re also a fair bit smaller in population.

silentbutdeadly (Aug 31, 2019 at 4:32)
Dear James, I'll give you a hint. It tells you fuck all other than the capacity of the national MTB association to actually field a team in the first place. It doesn't reflect the popularity of MTB within a given nation...which should be all that really matters. Kind regards

Mtirado17 (Aug 30, 2019 at 18:06)
When is comes to XC cant we just split Europe into two categories Switzerland and everyone else. The Swiss just dominate the XC world.

naptime (Aug 31, 2019 at 2:55)
@Vulhelm:
Sarcasm
noun
the use of remarks that clearly mean the opposite of what they say, made in order to hurt someone's feelings or to criticize something in a humorous way: