The crowning of Steve Peat as 2009 World Champion put an exclamation point on the Santa Cruz Syndicate’s domination of the downhill arena for the past few years. Peat’s 2009 season put him in the history books - 17 career World Cup downhill wins, 50 World Cup career downhill podiums and finally the elusive championship - and he alongside teammate Greg Minnaar pushed the Syndicate to the pinnacle of success. Minnaar won three World Cup downhills in his first season aboard the Santa Cruz V-10 and captured the UCI World Cup overall in 2008. He continued his charge in 2009, winning three more World Cup races, thus scoring 6 of his 11-career World Cup wins during his two-year stint with the Syndicate. Young gun Josh Bryceland’s contributions to the squad with his Junior World Championship title in 2008 and 13th overall World Cup performance in ’09 has made the Syndicate the UCI #1 Downhill Team for two years in a row. More details inside,This success is only possible with the best products, riders and support out there. We would like to welcome our new sponsors to the Syndicate for 2010 and thank continuing sponsors for their commitment to the program. Our new partners are Edge Composite carbon wheels, Chris King for headsets and hubs and we are back on board with Maxxis Tires. Muc-Off has added their top of the line lubes and cleaners for Syndicate use and we greatly appreciate the continued support from SRAM, RockShox, Truvativ, Avid, WTB, Crankbrothers, Lizard Skins and Clif Bar.

The Syndicate roster remains stacked with reigning World Champion Steve Peat, Greg Minnaar and Josh Bryceland pinning it in the downhill arena, Jamie Goldman rocking the freeride world, and John Waddell is down under racing XC and endurance races.

Rob Roskopp, owner and CEO of Santa Cruz Bicycles, says, “I’m excited to see the Syndicate continue on for the coming years. It’s been a huge source for R&D, allowing us to come out with so many advanced products in such a short time. Having such a dynamic group of people has contributed to the overall success of Santa Cruz Bicycles.” 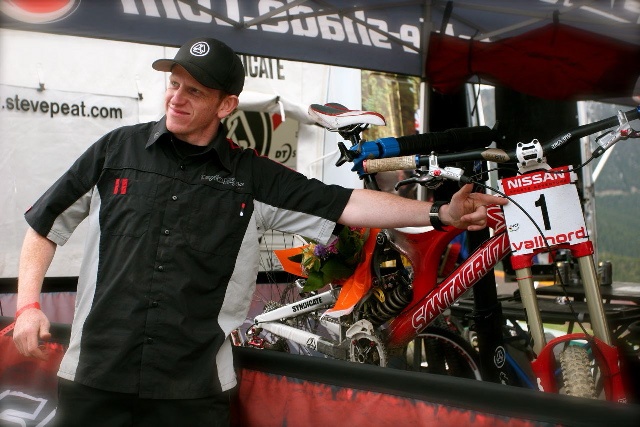 “Syndicate represents some of the best racers in the world, so what better program to show off our range of SRAM, RockShox, Avid and Truvativ product? SRAM is proud to be part of the fun that is mountain bike racing. SRAM loves racing, and of course winning so the Syndicate is an ideal fit. We’re looking forward to another great season!” ~ Eric Schutt, SRAM

“We at EDGE are very excited to be working with the Syndicate, we are excited to see the result of great product paired with great performance. We feel the DH environment and extreme capabilities of the riders will be the most defining way to demonstrate what sets the EDGE branded products apart from all others.” ~ Jason Schiers , EDGE Composites

“Maxxis is delighted to be back working with the Santa Cruz Syndicate. We have long admired their quest for perfection and with riders such as Peaty, Greg and Josh on board we are not only looking forward to more podium success but also the R+D feedback that such an experienced team can provide." ~ Leo Liao, Maxxis 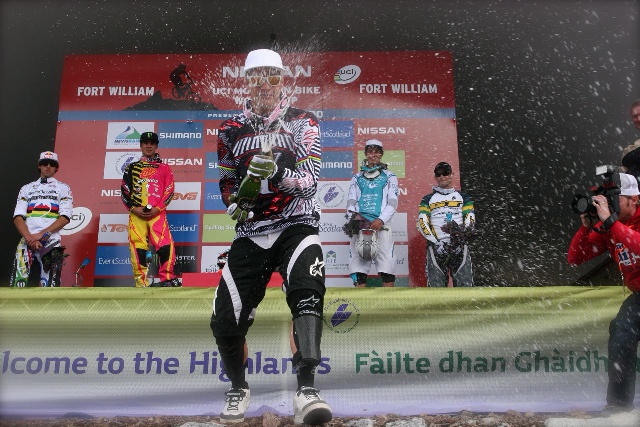 “I've had 2 great years with the Syndicate, so why change something that works? We have a couple new changes to our Santa Cruz V-10 for 2010. We're going to be rolling on carbon with EDGE Composite rims, we will continue to be Powered by SRAM/RockShox and would like to welcome back the best rubber in the business, Maxxis. With a V-10 set up with such amazing equipment, I can't wait for the season to kick off!” ~ Greg Minnaar

“Its great to be part of the Syndicate family again. We have built up a pretty special group over the years and I feel we have the best support from Santa Cruz Bicycles and all our affiliate sponsors. Whether I am out riding my V-10 or one of the many great bikes Santa Cruz makes, I am always happy and having fun because I know I’m on the right equipment. The Syndicate program has gone from strength to strength over the years and 2010 is no exception. We have had test sessions on new equipment that I think will raise our game considerably for the coming season.” ~ Steve Peat 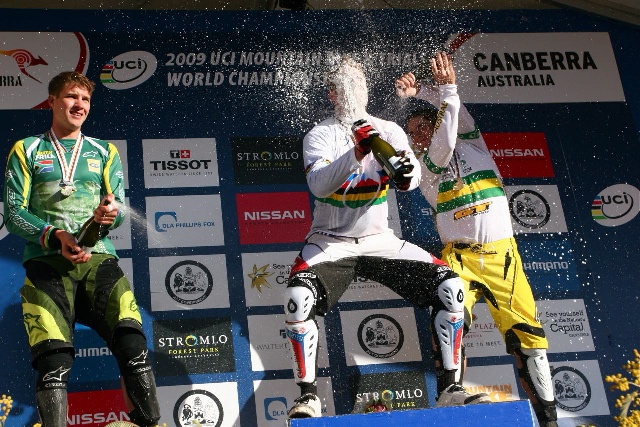 “I’m Superstoked to be spanking some shred with the raddest savages in the settlement!” ~ Josh Bryceland

"We're going to be rolling on carbon with EDGE Composite rims..."

kev1n (Feb 8, 2010 at 22:34)
don't expect for the team to be running the AM or even the XC rims. Edge will probably use the team as guinea pigs to test some FR/DH rims. Expect to see Edge components expand into the DH and maybe even freeride scene soon.

maximumattack Plus (Feb 9, 2010 at 4:48)
i love it when fools think they know there shit and shove it on here!!! For fooks sake...the Sessler even knows what Peaty,Minnaar and Miami have on their sarnies as well as all the Syndicate mechanics probably so she should know where they finished over all!!!! Lookin good Ricky Bobby!!!!

WAKIdesigns (Feb 8, 2010 at 23:35)
I don't think that EDGE as a relatively small business selling hightech super expensive, somewhat luxury stuff that just got itself a contract with one of the best teams in the Dh racing world, can afford providing a weak but hype'ish product.

fugazzi (Feb 8, 2010 at 22:16)
If you really love biking and buying the bike makes you feel like you will perform better with its new technology and backed by quality and winning titles than why not?

kathysessler (Feb 8, 2010 at 23:29)
You are looking at the current UCI world rankings, which is not the UCI World Cup DH Series overall standings.

dualsuspensiondave (Feb 9, 2010 at 17:15)
That's what I asked earlier and everyone was going on about the carbon bs.

derrickczn (Feb 9, 2010 at 6:33)
F*ck That!!! One imperfection in carbon and you have a fiber explosion! Not worth the minimal weight shed.

derrickczn (Feb 9, 2010 at 11:37)
No i dont! But i also don"t see F1 cars barreling ass down a mountian at 30 - 40mph. I had carbon handle bars on my Cannondale Moto Rise and crashed, the bars looked fine. Small 3' drop-in later the shattered at the stem like brittle cany! Carbon for lightweight road applications is perfect. IMO i don't care for it on my DH bike.

cmjperkins (Feb 14, 2010 at 15:00)
f1 car can produce around 6000N/m (around 600kg/m) of downforce at 100mph let alone any of the other forces to consider, which I’m sure on its own is equal to if not more than any force exerted on a bike in "normal" race conditions, but as with most "race" oriented components you wouldn’t want to use them again after a crash, certainly not without specialist inspection. Such components are designs to take nominal working loads and stresses that accure in normal race conditions. A crash isn’t taken into consideration with these types of components unless it is absolutely necessary as it adds weight and hampers performance.

For an average rider these types of components are not suitable, but for the pro's, every little bit of an advantage helps.

i wont be out getting myself any carbon fibre parts any time soon either, not for general use any way.

Sorry if I sounded blunt in my previous comment, it was the "One imperfection in carbon and you have a fibre explosion!” part that got me,(plus i was tired and in a stress lol)

WAKIdesigns (Feb 9, 2010 at 7:53)
man:
1. Carbon doesn't explode
2. Watch before further reading: www.youtube.com/watch?v=Y_O9PLorYPA
3. Every CF element is pretty imperfect. In every industry, including aerospace, there are no Nasa scientists laying every nanosize carbon fibers in an perfect place for months, and then when one of them fail "explosion" occurs... they use the whole damn filaments, take a brush for 20cents to apply the resin, then put it to form and then to the oven.
3. The Edge AM rim weigh 400g, and Singletrack MAg guys call it bombproof. Taking into account that the DH rim will weigh max 500g - it is a huge weight saving. Furthermore in many races I am sure they will use AM ones (as they used DT enduro wheels) which means their wheels are a ton lighter than Deemax Ultimates. In short words: better acceleration, better braking.

cmjperkins (Feb 9, 2010 at 9:37)
Well said. It annoys me how some people diss carbon fibre with no actual knowledge of what they are talking about.

derrickczn (Feb 9, 2010 at 11:52)
Yea what is the first thing he says in the video after hitting the carbon fork "YOU WILL NOT WANT TO RIDE THIS FORK AFTER" Also the steel shows visible dents....of course!! the problem with carbon is you dont know what could have happend to it till it just goes.

WAKIdesigns you ever crash a DH rig with any carbon components then put it to work a short while after? I wish i had pictures of the accident bc that would end this convo. Like i said carbon is a great material for certain apps. IMO IMO leave it off my wheels, bars, and frames. (DH Only)

derrickczn (Feb 9, 2010 at 11:58)
The explosion was an exaggeration as well. It snaapped, but the edges looked like it exploded. Just to clarify.

WAKIdesigns (Feb 9, 2010 at 13:34)
Well, this is the stuff for PROs, real PROs, so well U might be right in some way. Keeping this stuff from weekend warriors or weekend racers until it helps to develop a more affordable components. But without such a research as Edge does, we would still ride doublewides...