The 9 Women of Audi Nines & The Bikes They're Riding 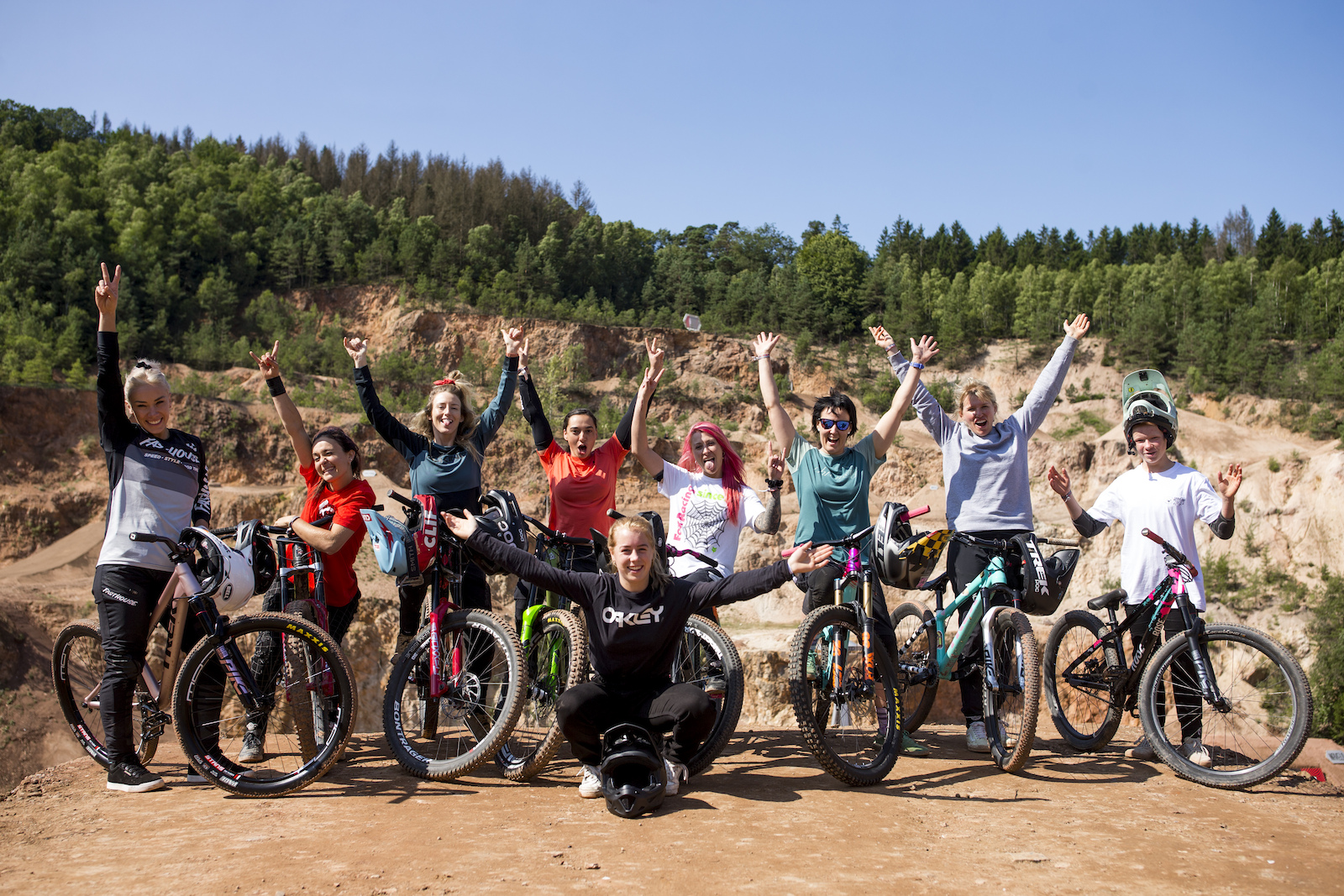 Audi Nines is renowned for being a boundary-pushing event, and whilst the snow Audi Nines has seen both men and women hitting the slopes together since 2011, and 2021 would be the year that women debut at Audi Nines MTB.

Back in the golden quarry for the 4th year running, this year will see 36 riders, 27 men and 9 women.

We've got a lot of exciting stuff to show you from the women giving the guys a run for their money at Audi Nines, but first, let's introduce you to who you're going to see a lot more of. 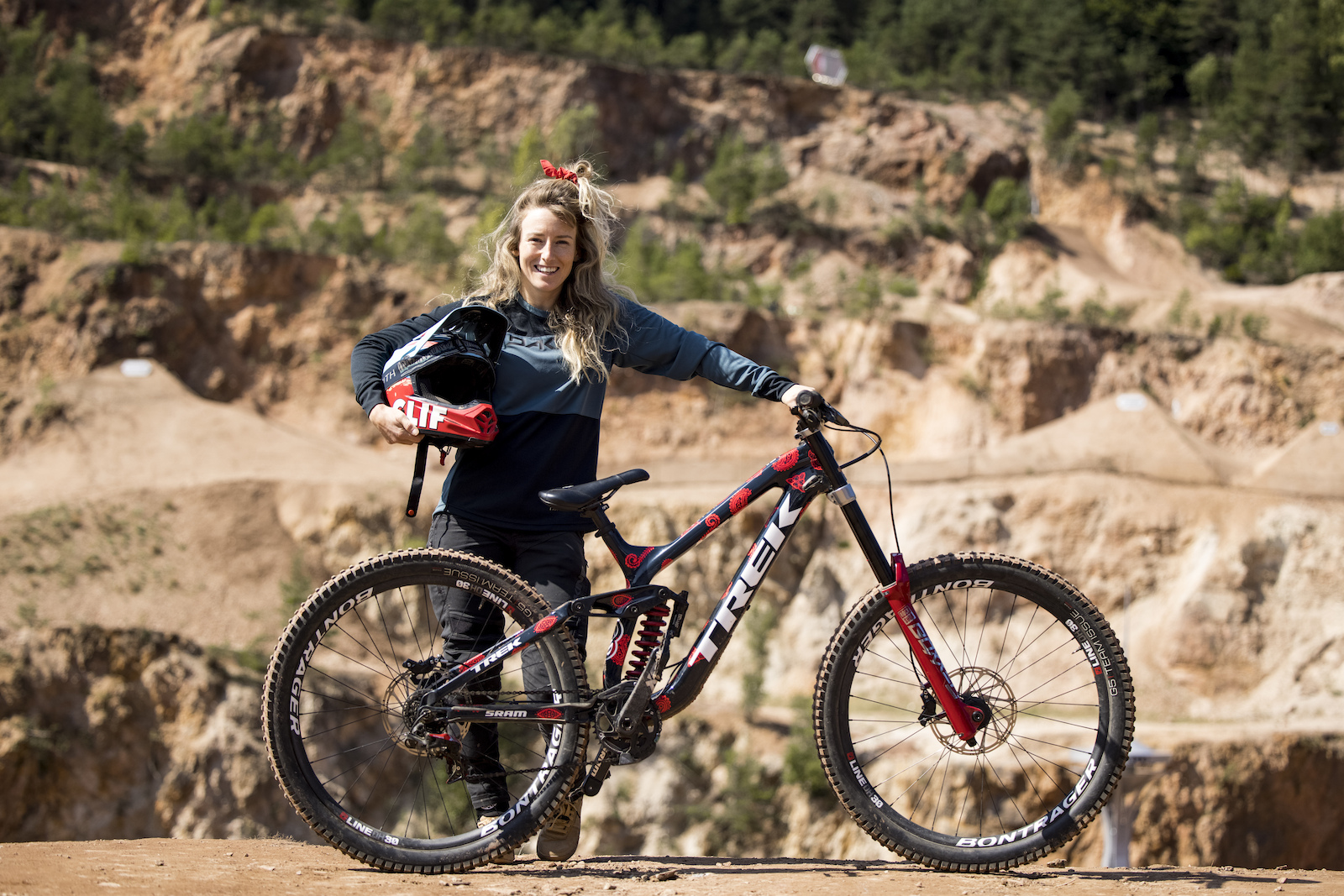 The 2x Queen of Crankworx winner and 5x Whip Off World Champion Casey Brown is known for going large, being amongst some of the first mountain biking women to show that the big takeoffs, weren't just designated for the guys. Hailing from New Zealand but now calling Canada home, we're stoked to have Casey here just off the back of sends at Dark Horse.

Casey will be hitting the multiple courses here at Audi Nines on her Trek Session Park. 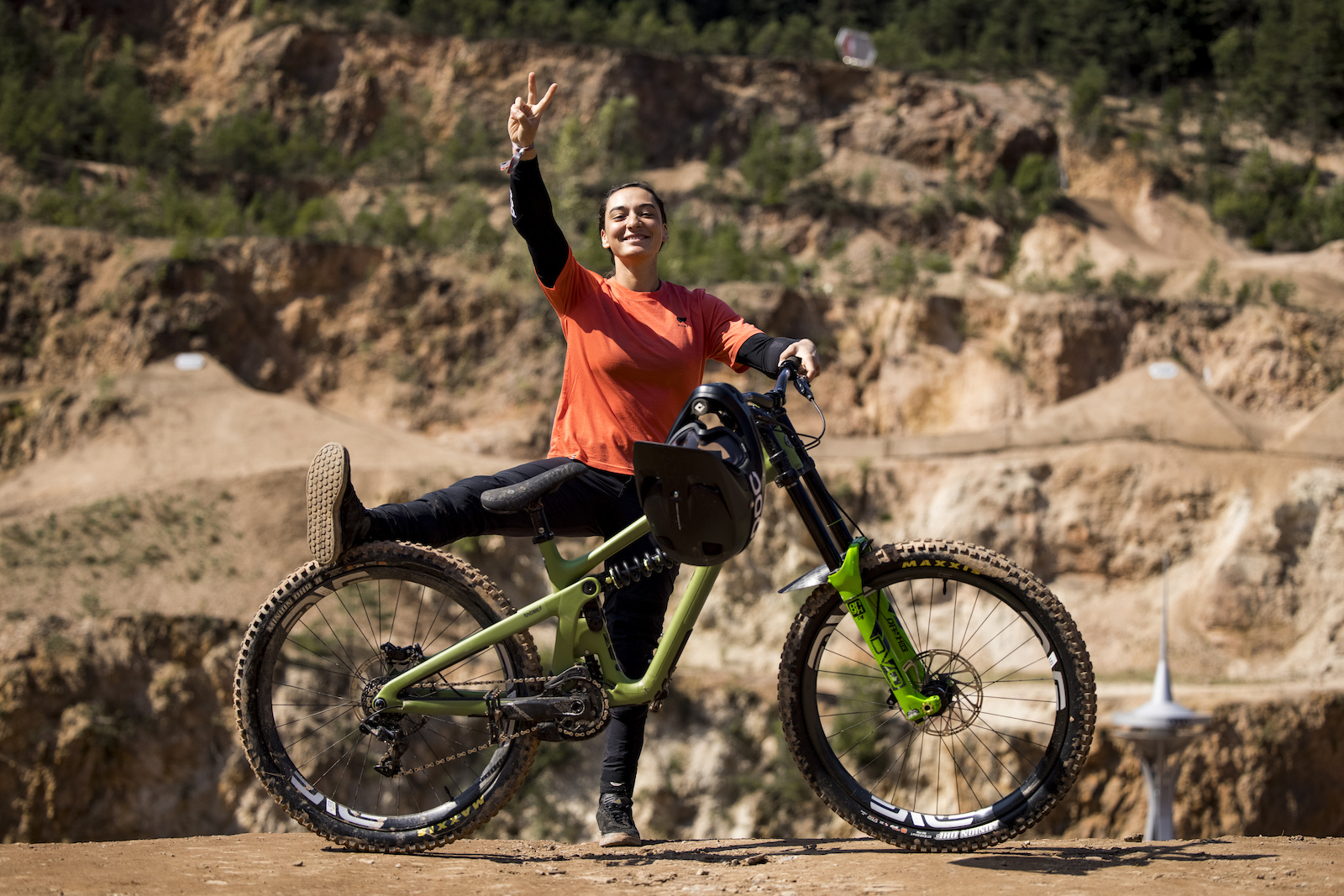 Next up we've got Robin Goomes, coming from Rotorua, New Zealand, Robin only picked up mountain biking in 2015 and has quickly become known for her determined and positive attitude on the bike, along with her flawless backflips as were perfectly demonstrated at Crankworx Innsbruck this year during the Speed & Style event.

Robin will be riding Audi Nines on her Yeti SB165. 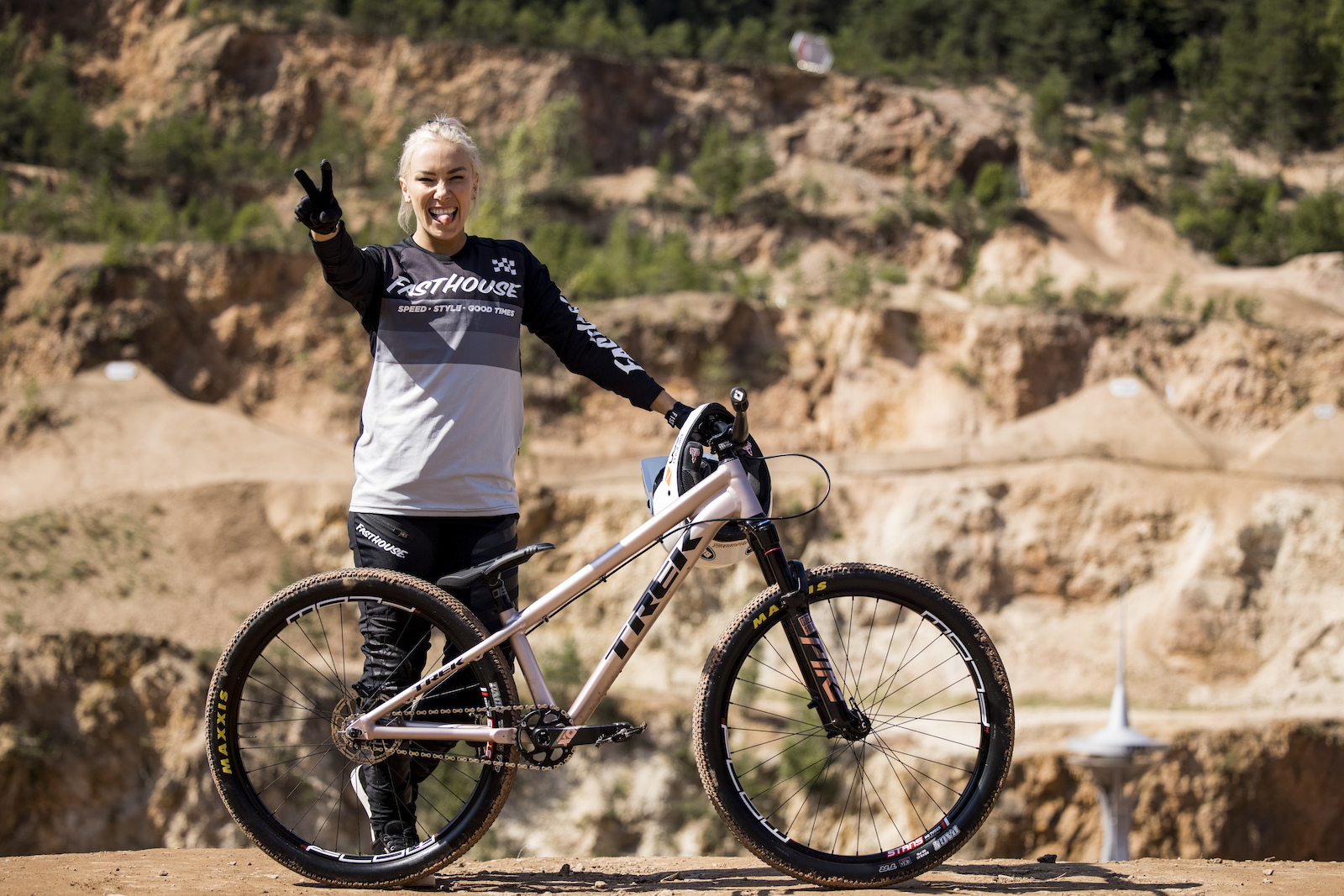 The 5-time BMX World Champion Caroline Buchanan has taken a different path this year, turning her sights more towards the world of MTB and sizing up her wheels and jumps and we're excited to see what the Australian brings to the jumps here at Audi Nines.

Caroline will be riding her Trek Ticket. 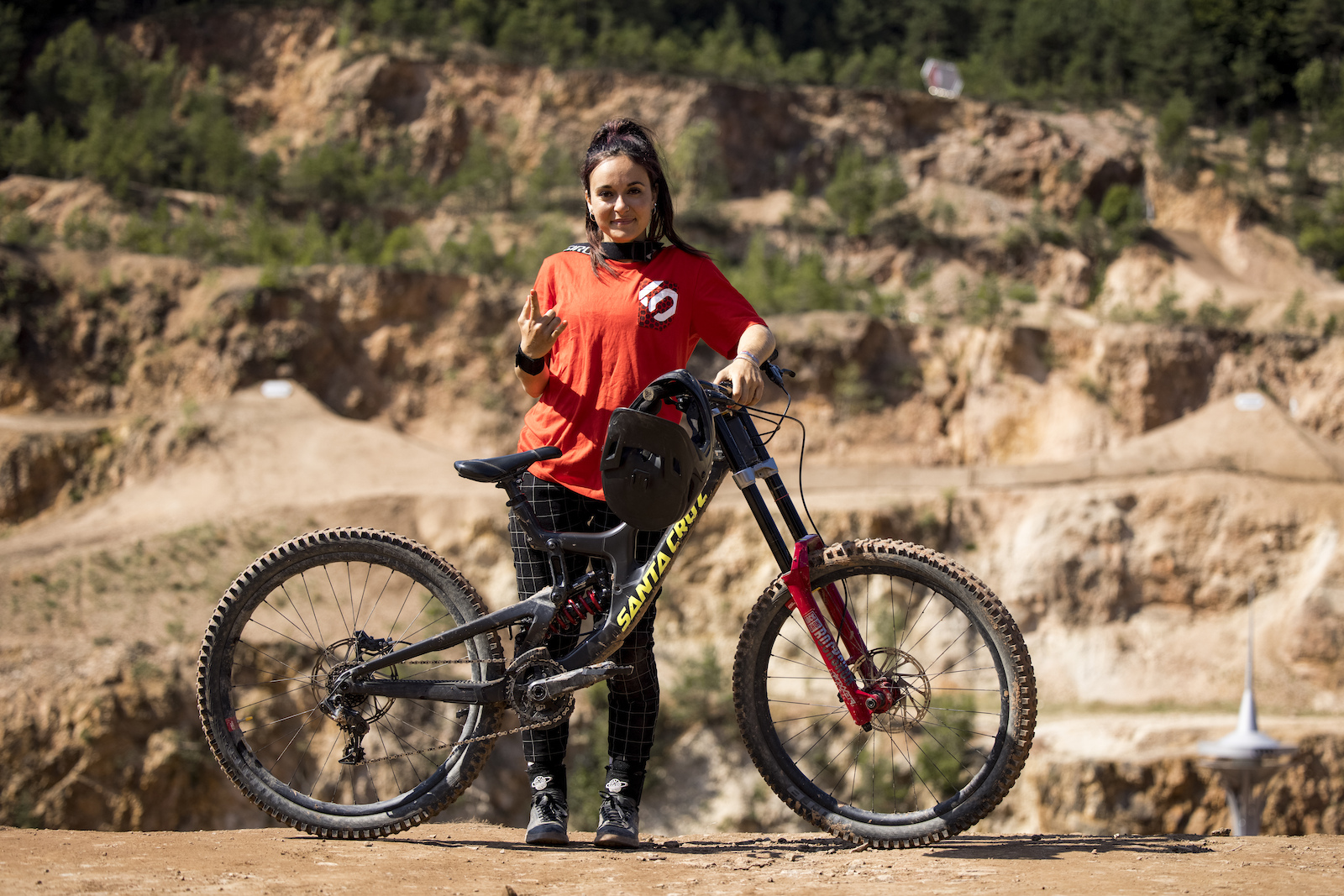 She's been responsible for getting people stoked to dig and shred in the UK for some time now, and we're stoked to see Kiwi/adopted Welshie here at Audi Nines. Her 2019 Vision Movie brought together big jump riders from all over the world to hit her Vision Line, so Audi Nines shouldn't feel too different from those awesome days of filming.

With her recent move to Santa Cruz, Vero will be riding her V10. 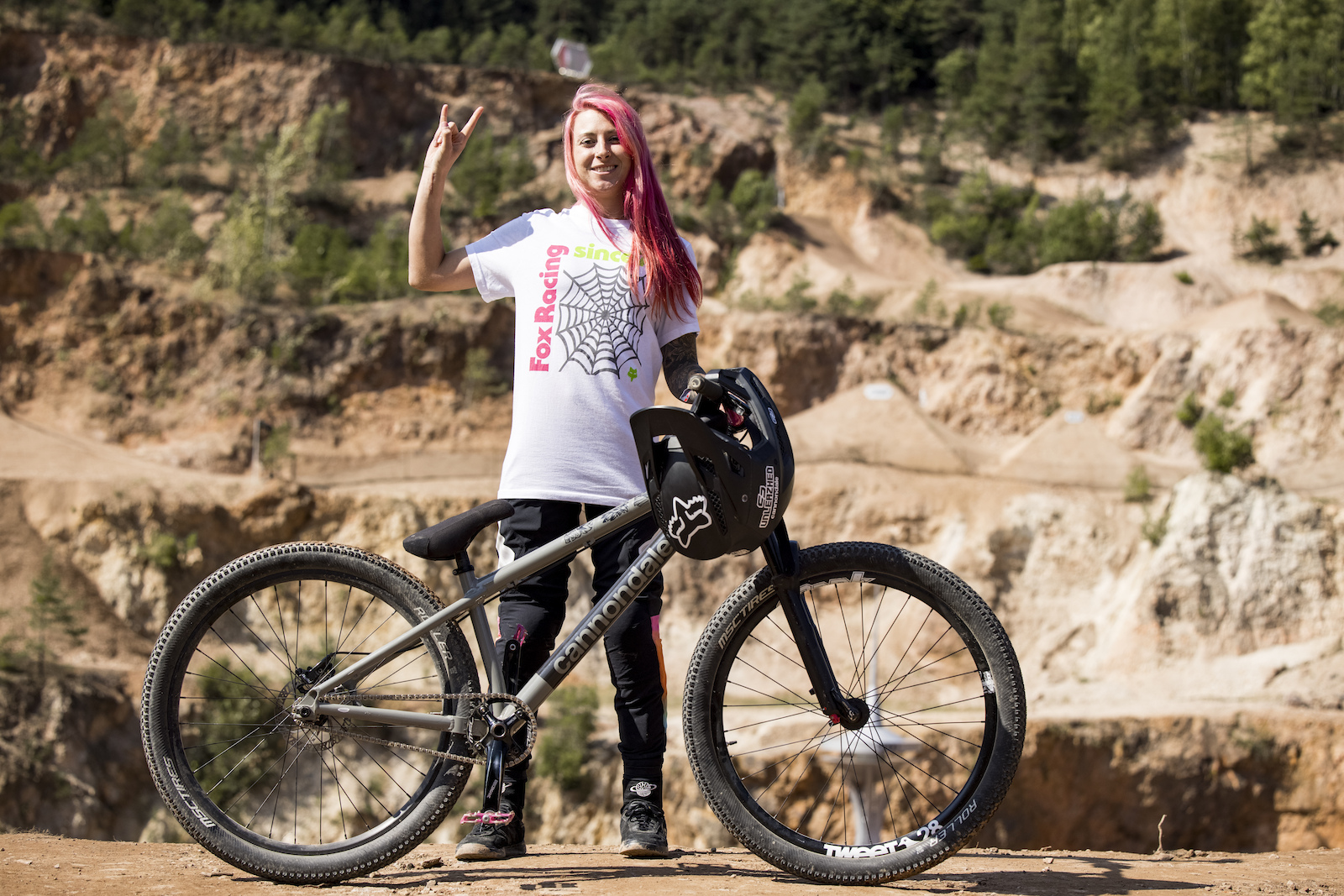 With La Poma bikepark on her doorstep in Barcelona, it's no surprise that Gemma found a love of two wheels and dirt jumps and it's even less of surprise that she's here at Audi Nines. 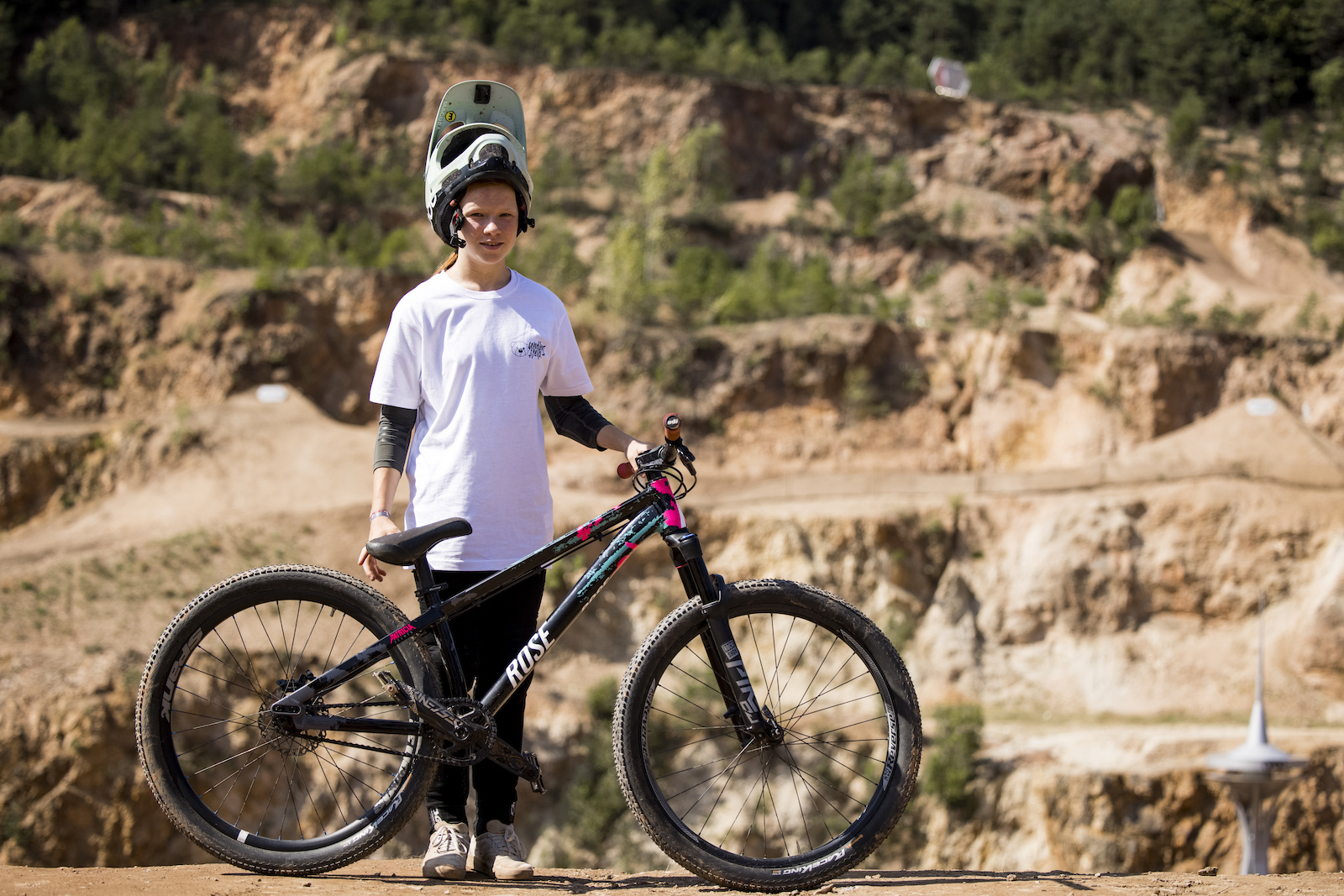 The youngest rider ever to be invited to Audi Nines is German shredder Patricia Druwen. Already throwing down a backflip on her first day, we're excited to see where this week of progression will take her

Patricia is riding her custom Rose "The Bruce" jump bike. 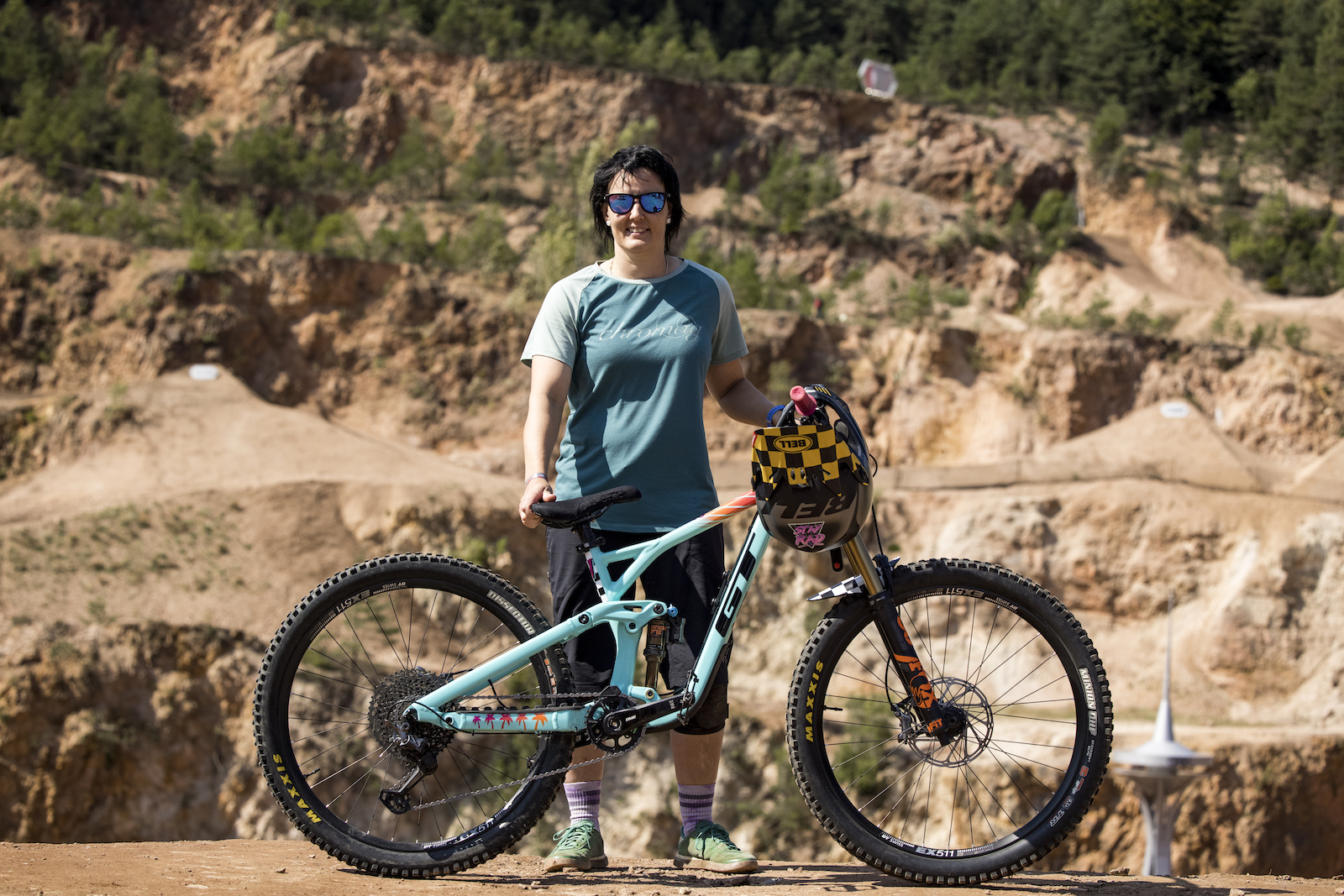 From the youngest, to the oldest rider we've got at Audi Nines. Joey Gough is a British Dirt Jump and BMX legend, and an underrated rider despite her endless skill and style on a bike. You can get to know Joey Gough more here. 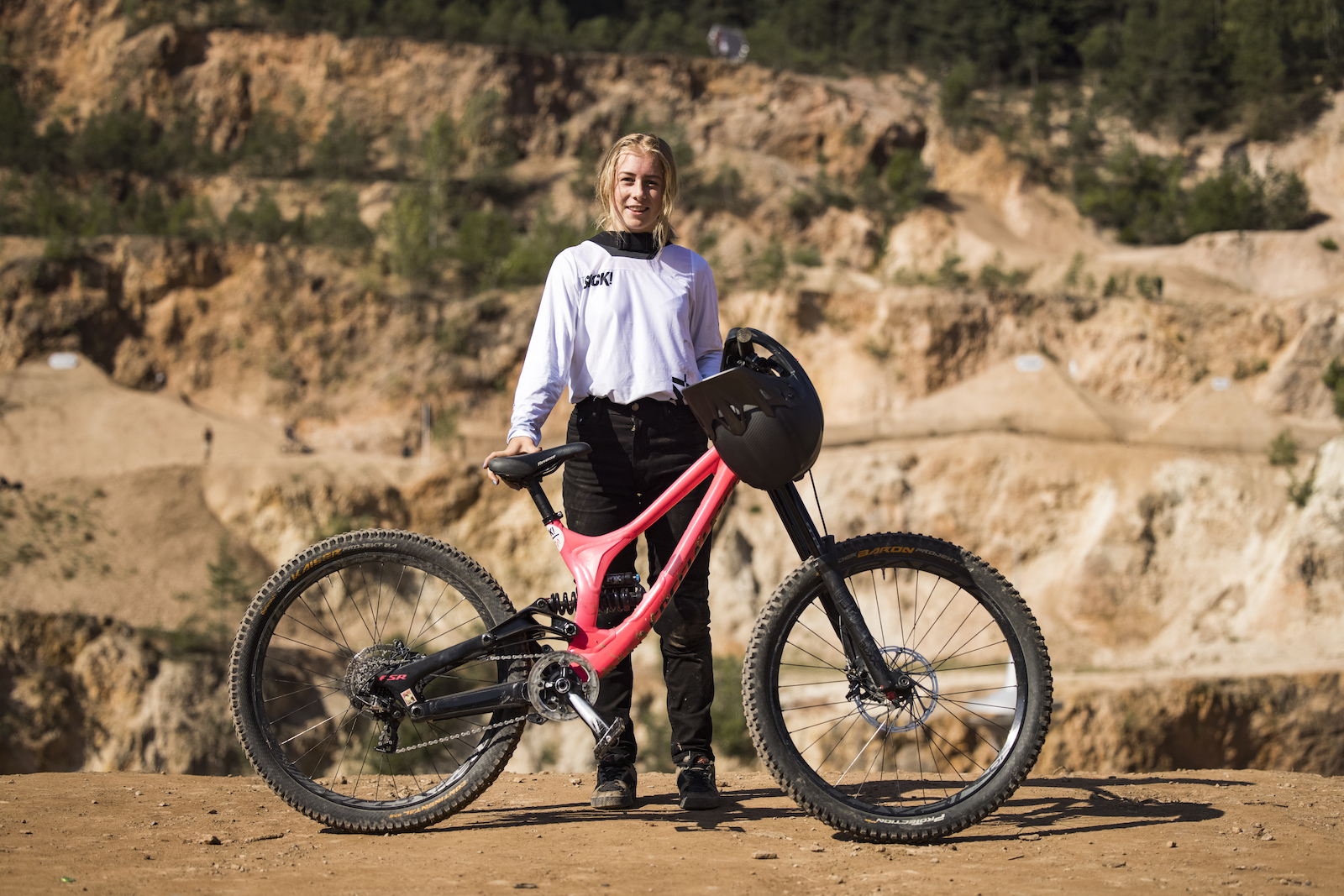 With all the slopestyle talent in Sweden, it's no surprise that there's a Swedish woman in the mix at Audi Nines. At just 18 years old, Alma is already known for her love of sending big jumps on her big bike, a Specialized Demo to be exact. We know Alma has smashed out a backflip at home, we're just eager to see how she will bring it to the course here in Germany.

Alma will be riding her Specialized Demo. 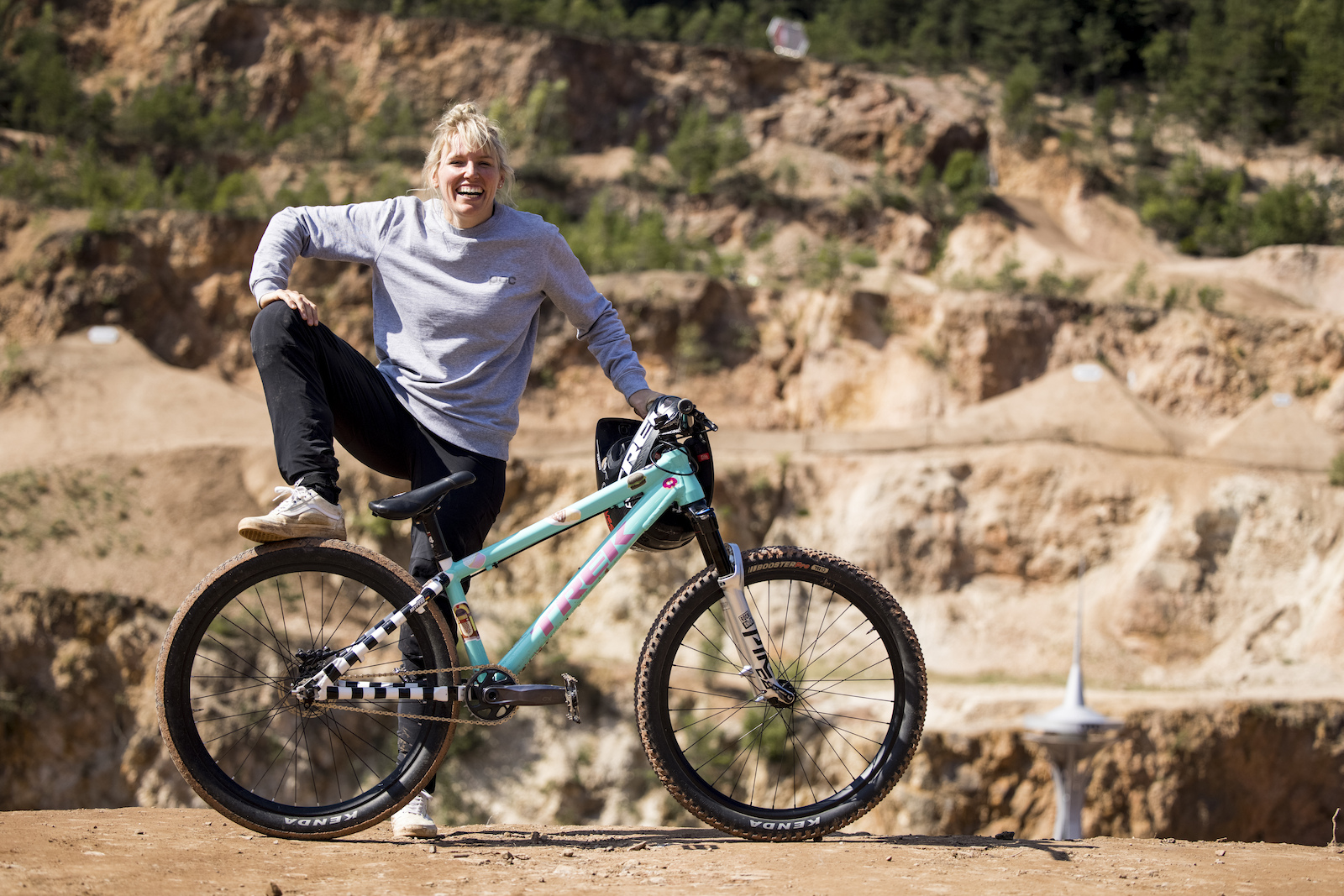 The dirt jump loving Austrian Kathi Kuypers is a lover of all things two wheels, Kathi found her true passion in dirt jumps and slopestyle, competing in the 26Trix event in Leogang as well as events like the Swatch Rocket Air in Switzerland. Kathi is no stranger to the Audi Nines way of life, stopping by in 2019 to check out the course, Kathi has helped push for more womens involvement in the event.

We are super excited to see all the women sending it this week, it's been a long time coming and is the next step to sharing the sport we love so much with all riders.

pimpin-gimp (Aug 25, 2021 at 12:21)
Joey is such a style monger, so smooth!
Every year she inspires me to buy a DJ bike for the winter, and every year I realise it’s a waste of time because watching her on Instagram doesn’t actually make me good enough to ride like her.

rcwellie (Aug 25, 2021 at 14:11)
Great to see so many NZ women in the line up and with Future Ground up and running there are more to come! Inspiring stuff for kids like my daughter.....

DKlassen8 (Aug 25, 2021 at 11:49)
Its seems they are either riding full blown DH bikes or dirt jumpers. To me, those two types of bikes always seemed to be on opposite ends of the spectrum.

danncam (Aug 25, 2021 at 14:02)
Only person who's nationality was left out was Caroline, she's an Aussie just in base you didn't know. Bonza lineup, carn Cazza!

korev (Aug 25, 2021 at 13:36)
Gemma was jumping at the Basel Bike festival last weekend and was looking impressive.