The Stevie Smith Memorial DH Race was held at Mount Washington Resort on August 28th and 29th. Tianna, Stevie's mother, has been carrying on Stevie's legacy since his accident in 2016. She runs the Stevie Smith Legacy Foundation that runs community enrichment projects and supports young aspiring racers. She was also running a tent at the race where riders had a chance to win Stevie's jerseys and helmets! So, a group of bike industry folks decided it was time to give back to Tianna. 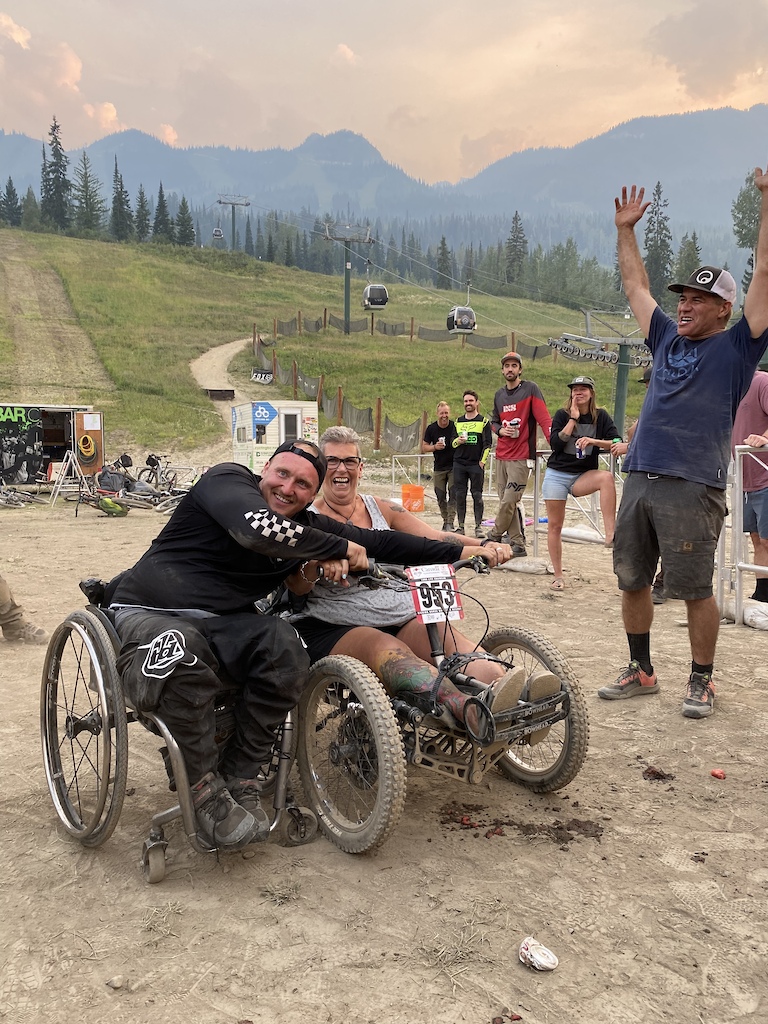 The seed for this initiative was planted earlier this year at the Canadian DH National Champs at Kicking Horse Mountain Resort. Tianna was celebrating with everyone at the wrap up party in the pits when she hopped in a Bowhead bike for the first time. Many racers hopped in to give the bikes a try as well, including Brett Tippie, Miranda Miller, Remi Gauvin, and others! While many others crashed, Tianna showed everyone how its done and had a clean ride!

Tianna expressed wanting one of these bikes due to hip issues, and because they're a heck of a good time. The bike would allow her to explore the trails around the island, and even ride Prevost, where she had shuttled Stevie countless times! All those shuttles arguably made Stevie the rider he became, which is another reason the community is grateful for Tianna and her dedication to the sport and athlete development.

Along with shredding on the adaptive bike and showing up all of the DH racers, Tianna also joined the Rippers Lounge Racing tent for her first keg stand! Stevie would be proud. 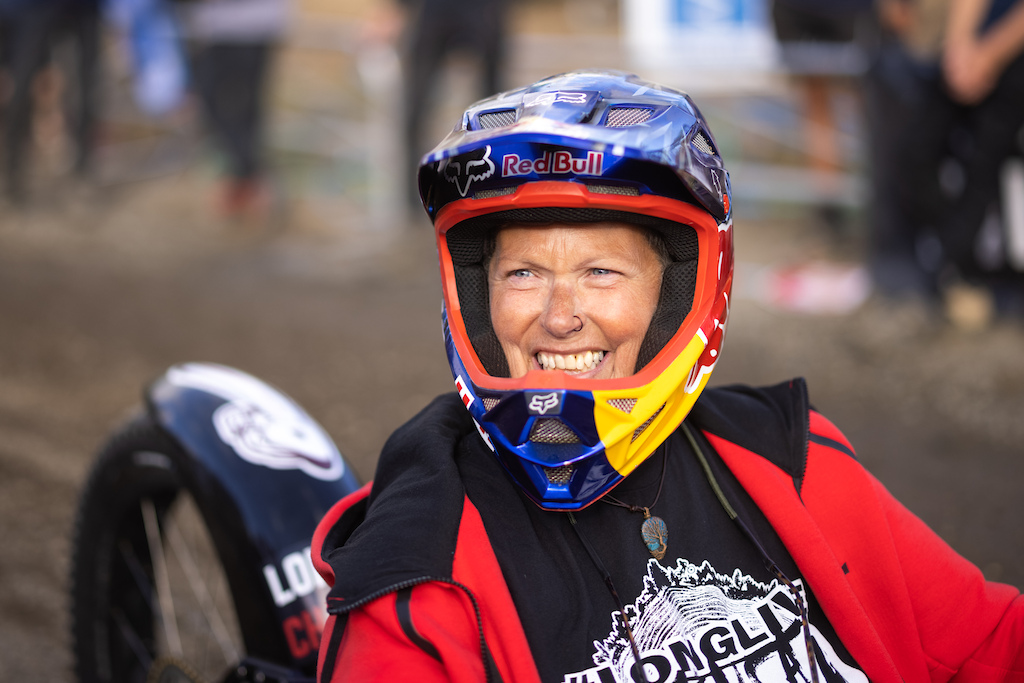 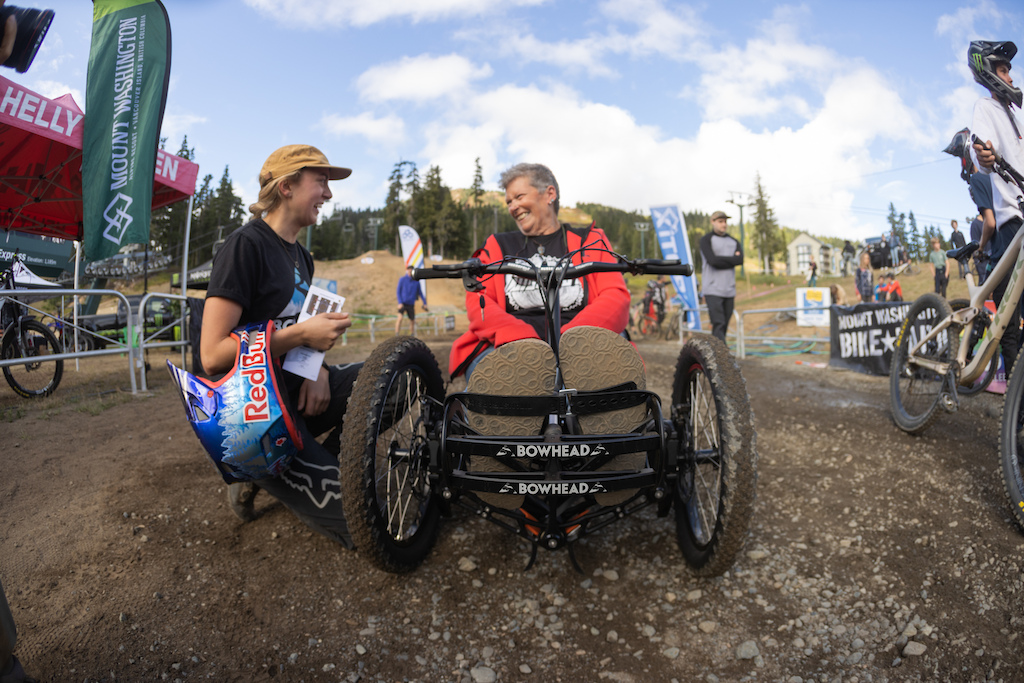 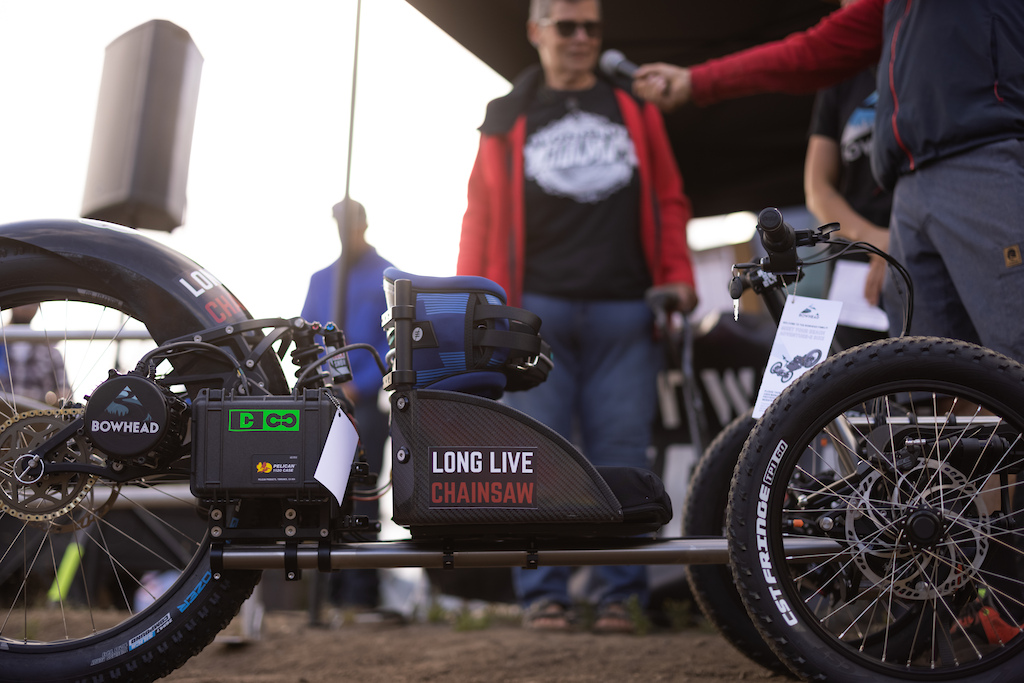 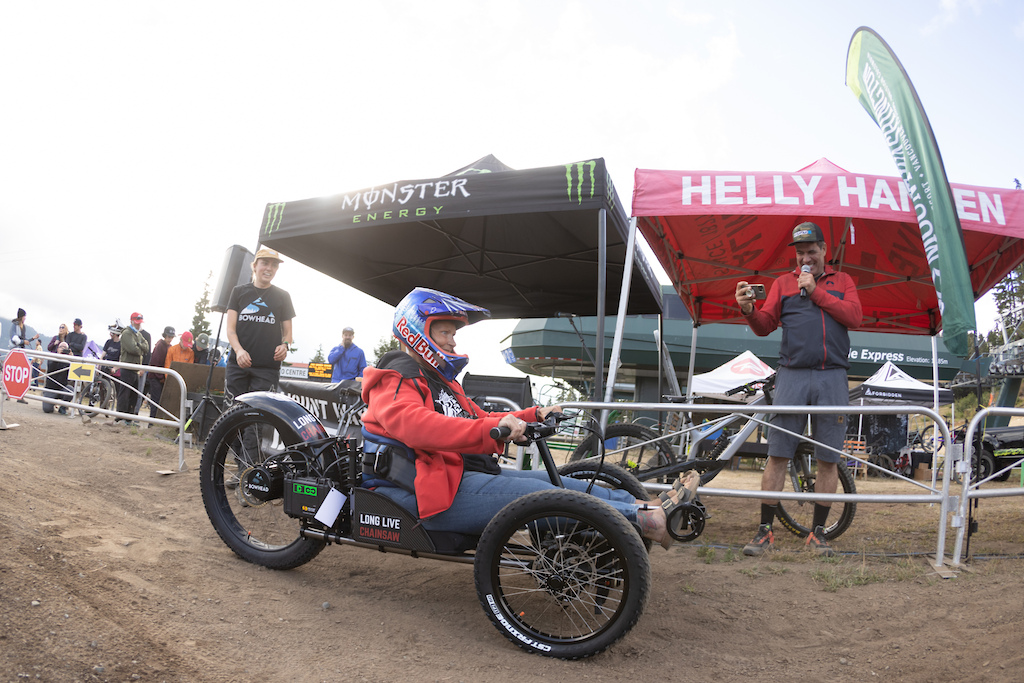 Her smile says it all! #longlivechainsaw 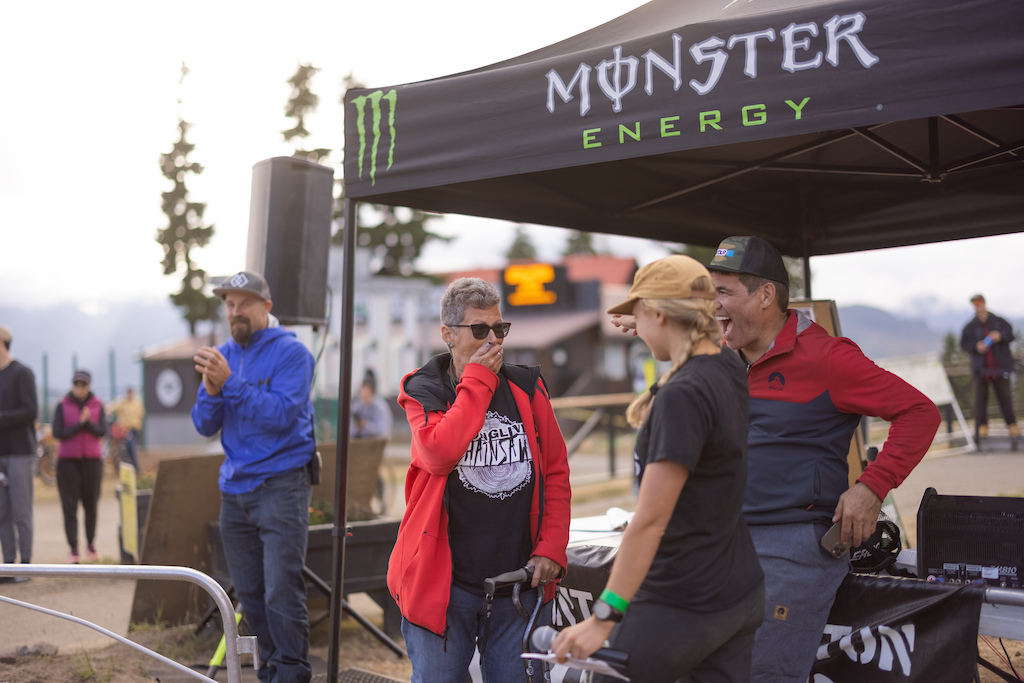 The moment Tianna realizes that she is getting a custom Bowhead Reach! 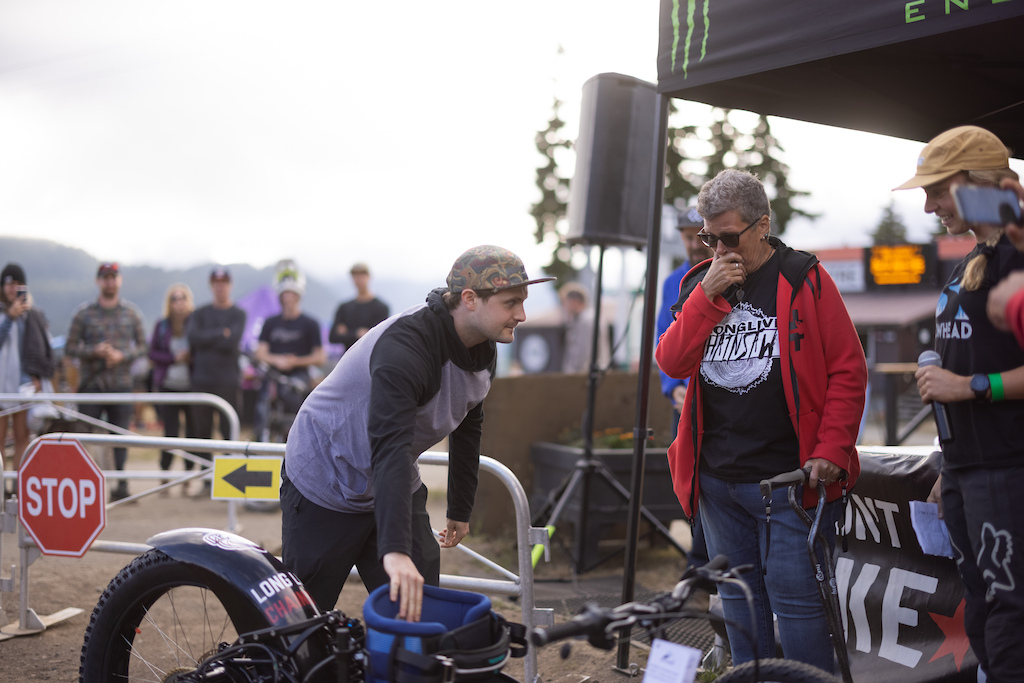 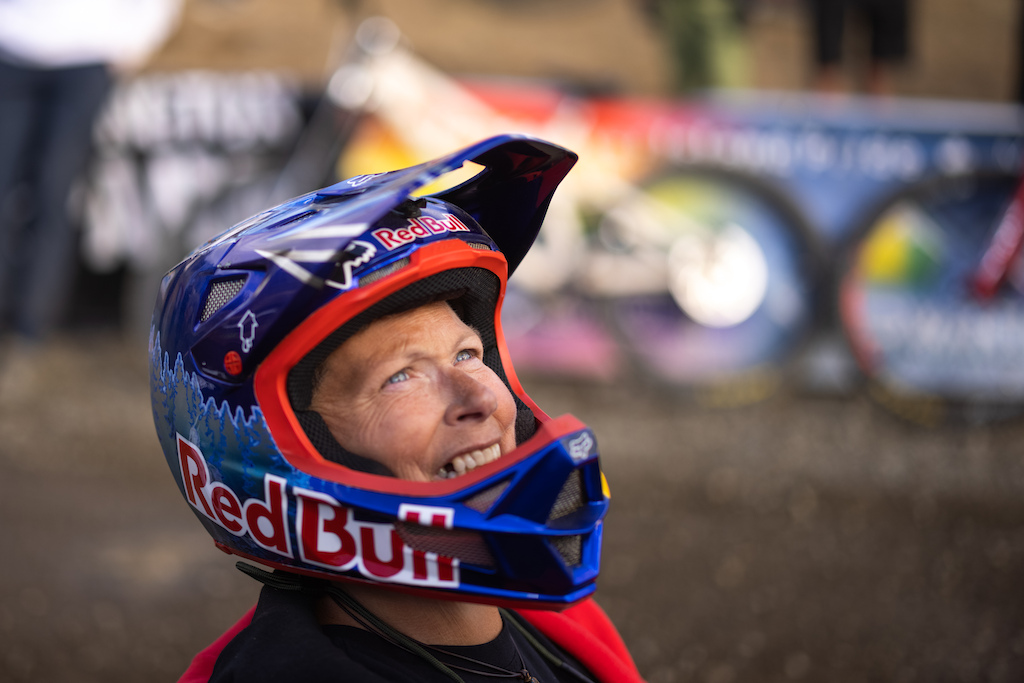 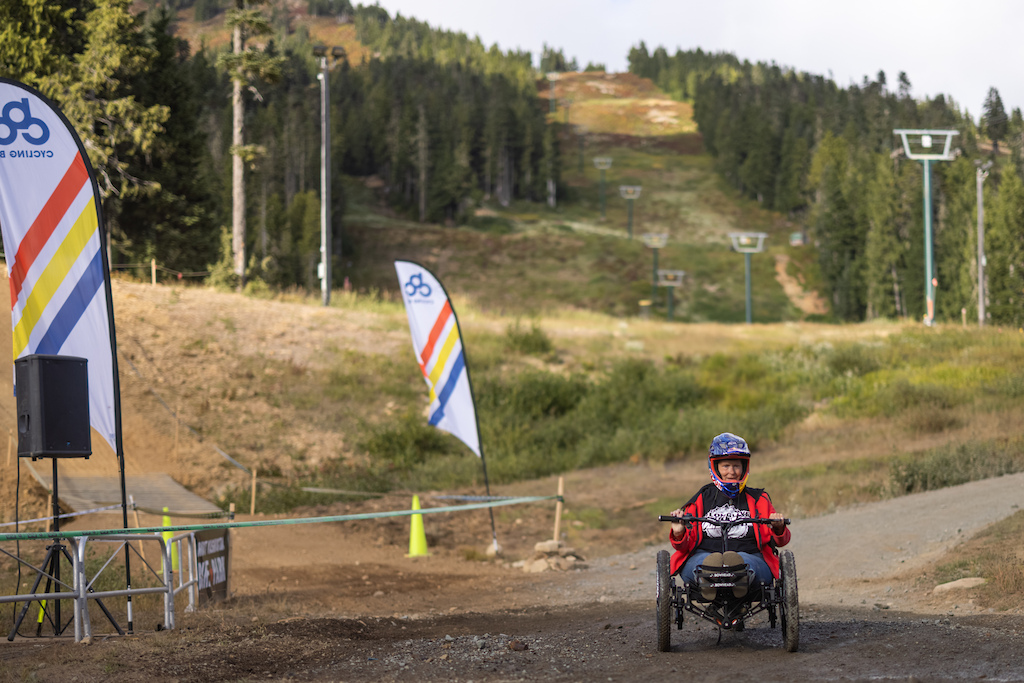 This project was made possible by Stevie's sponsors and other members of the bike community. Huge thank you to Anthill Films, Bowhead Corp, Kootenay Adaptive, SRAM, Devinci Cycles, Corsa Cycles, Rippers Lounge Racing, Niall Pinder, Cruz Family, Brook Macdonald, and all the other individuals who supported! We would also like to thank our team of engineers and builders who worked their magic and brought this bike to life at such short notice. 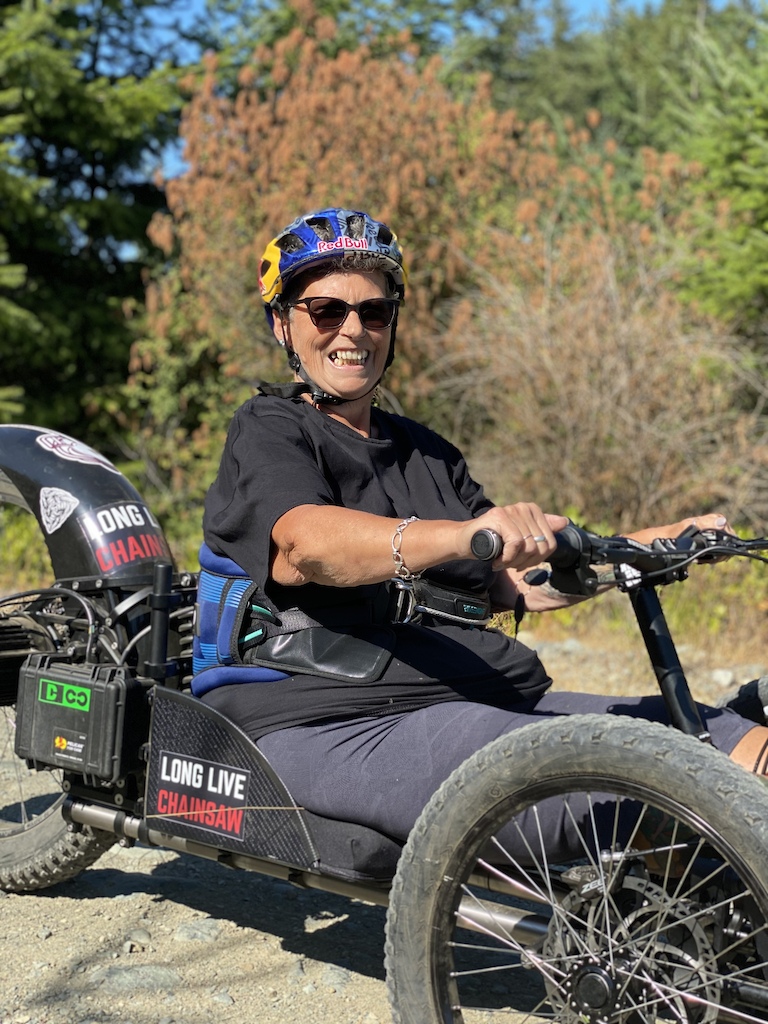 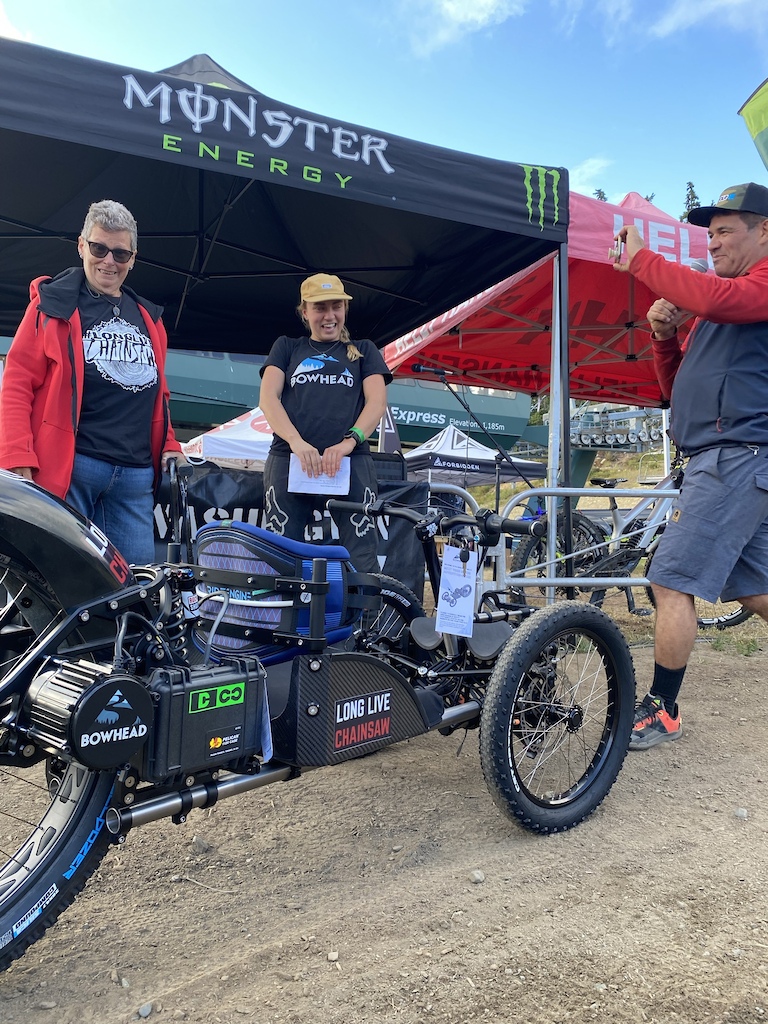 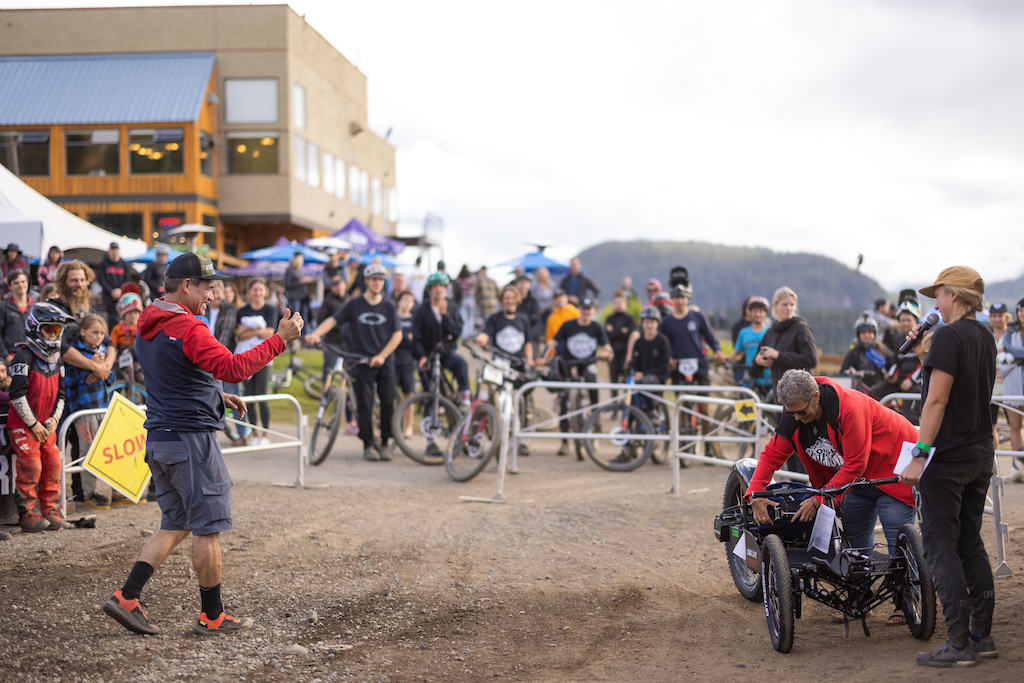 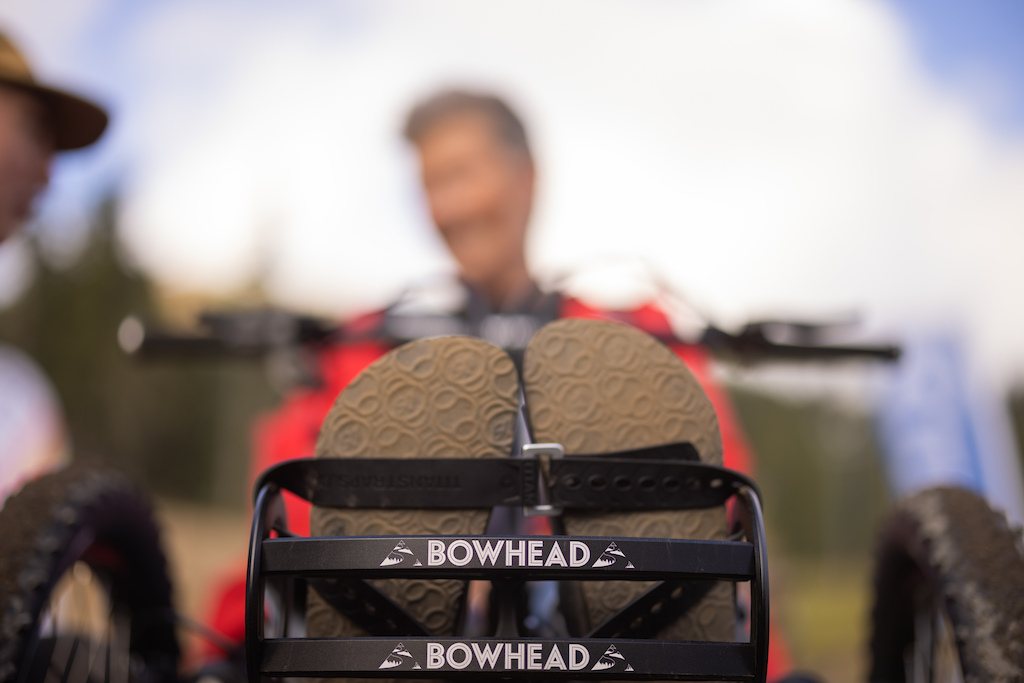 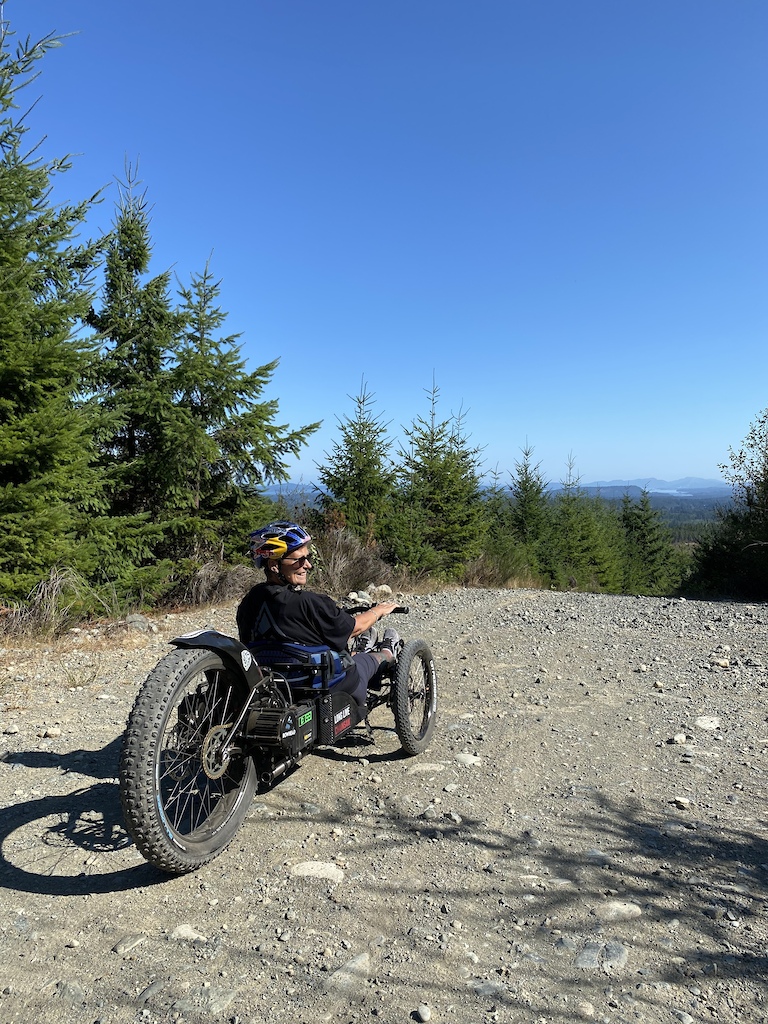 Tianna's bike is custom built in Calgary, Alberta. Bowhead uses as many mountain bike components as possible so that riders can get them serviced at their local bike shops. The articulating front-end allows riders to access off-camber, rough terrain, so that they can explore deeper off the beaten path! It is full suspension and has an electric motor. And of course, #longlivechainsaw decals. 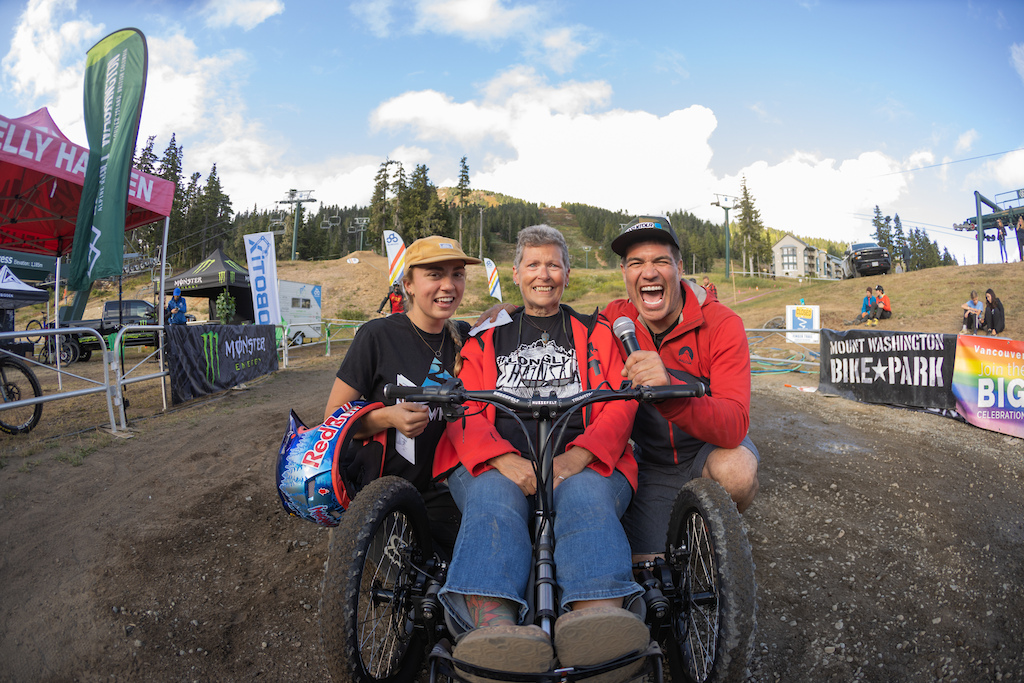 Watch Tianna Smith get her Custom #longlivechainsaw Bowhead Reach. Huge shout out to Brett Tippie for always bringing the stoke and making these events so special! See you on the trails, Tianna!

jgottya1 (Sep 3, 2021 at 8:26)
Coolest thing I’ve seen on here or anywhere in a long time! Chainsaw left a legacy and his mom helped create that by her tireless training shuttles and support. No one more deserving than her!! Thank you to all who stepped up!

mammal (Sep 3, 2021 at 10:48)
She's also been spending most of her free time supporting and growing the mountain bike community in BC since Stevie's death. She's an absolute force of biking good will, and so deserving of this.

notsofastoverfifty (Sep 3, 2021 at 13:55)
@hatton: Yep, the first thing I thought of too. What a fantastic gift for a wonderful woman. Kudos to all involved.

ClintTrahan (Sep 3, 2021 at 9:29)
Having T use one of Stevie's old helmets to take a rip in this was easily the highlight of the entire weekend. I remember talking to Tianne earlier in the day about this and that - she mentioned she was going to test ride another Bowhead and look at getting one as she was in love with what it could do for her. Little did she know by dinner time she would have one. VERY awesome more by everyone involved. super, super cool.

stephanepelletier (Sep 3, 2021 at 9:30)
I'm not crying, you're crying! Amazing work to Sally and the team at Bowhead. This is why the MTB community is the best in the world. Can't wait to see her tearing it up!

giantwhip (Sep 3, 2021 at 8:37)
Steve's the only racer I would wake up at 2 am to watch his race runs live. The way he attacked was unbelievable

JamieKnight (Sep 4, 2021 at 6:52)
I’m loving the recent uptick in adaptive cycling coverage. With the Phase and this. I recently had a life changing injury, it’s wonderful to still feel part of the community. Riding different bikes but still riding

davethesurfer (Sep 3, 2021 at 20:24)
Tianna is an awsome women who brings a ton of joy to the Island bike scene, you can often find her at her son's bike park giving out good vibes and watching the youngsters rip. One day last spring she came with a trunk load of Stevie's old gear, some of which was used some of it was brand new and gave it out to a ton of kids and adults alike who were stoked to be wearing the gear of an absolute Island legend. I was lucky enough to to pick up a pair of pants and a shirt and let me tell ya I feel faster just putting them over my out of shape body. Tianna you deserve this bike more than anyone, you and Stevie's legacy will be felt for generations to come here on the Island!!!!

w0dge (Sep 3, 2021 at 8:34)
If this doesnt give you a mega feelgood feeling going in to the weekend, nothing will. Awesome stuff from all involved. Love it. #longlivechainsaw #imnotcryingyourecrying

pen9-wy (Sep 3, 2021 at 14:19)
This is what mountain biking needs in the media. So good. Cuts through all the product placement crap we are forced to suck up. Real life , real commitment and improvement to mountain bikers lifestyles. Inspired and because of, one of the best racers I'll have ever witnessed.

VwHarman (Sep 3, 2021 at 14:58)
This is a very cool move, really representing what it means to have a community. Much respect to all who made this a reality.

thenotoriousmic (Sep 3, 2021 at 13:13)
She definitely had the best segment in seasons after Matt Hunter.
Post a Comment