anchoricex jamessmurthwaite's article
Apr 27, 2022 at 11:49
Apr 27, 2022
The Zoceli Nanetro is a Slopestyle Bike with a Unique Suspension Design
The stitched720 is still the best looking slopestyle bike change my mind. One thing I've seen is a lot of slopestyle athletes just ride hardtails now, most of these bikes are too heavy and not nimble enough to throw around as much as they need. The stitched720 was the only bike I've seen that seemed to check the boxes of being close enough to a hardtail but have a little extra cush for the big landings, but hell even the main riders of that went back to hardtails. The c3 athletes obviously rock their ticket-s's but they're just getting free frames a couple times a season it seems, I'd build free bikes up and ride them every chance I could.

anchoricex sarahmoore's article
Jan 28, 2022 at 16:45
Jan 28, 2022
Throwback Thursday: Looking Back on Brett Rheeder's 9 Years with Trek
Am i the only one wondering if Bretts doing okay? I think post competition life has been both rewarding for him but also potentially leaving you feel a little lost? Fox parted ways with him, and now Trek (unless the trek part was voluntary which who knows?) Overall just hope the kids good. His injuries keep hitting him when it matters most and I just hope he's in a good headspace and hope he's living his life in a way that's meaningful to him.

anchoricex edspratt's article
Oct 21, 2021 at 18:14
Oct 21, 2021
5 Things We Learned from Red Bull Rampage 2021
@jojotherider1977: Holy shit i just went and peeped that 5g drone footage at the end. The barspin he does looks fucking horrifying, then the flatspin he does onto that hill he wiped out on... okay wow yeah that's fucking horrifying. I completely get why someone who can execute tricks and stuff like this is scored so high now. The tailwhip just looks freaky. I would likely never send most of this with straight airs. 03:42:45 for anyone interested, I really think this footage brings the scale of it all into perspective. https://www.pinkbike.com/news/5-things-we-learned-from-red-bull-rampage-2021.html

anchoricex mikelevy's article
Oct 14, 2021 at 12:57
Oct 14, 2021
The Pinkbike Podcast: Episode 85 - Is the Red Bull Rampage Too Slopestyle?
I think a big problem people have is that want to see a ton of uncontrolled terrain and don't really care when they're watching from their computer screens if people get hurt. None of these riders want to get hospitalized, and people were falling like fucking crazy in the early rampage days. Sure it's entertaining, but shit I don't blame anyone for wanting to make a nice controlled groomed landing. They're still sending gnarly shit, and I'm sure zero people who preach "freeride4lyfe" in these comment sections are feasibly attempting any of what these athletes attempt on their groomed stuff. Scale is obviously lost when watching playback from our computer screens. I also think people tribalistically want to see their favorite freeriders win and hate when the slopestyle guys are capable of doing slopestyle AND winning this. I think it's fine to have your own preferences, but I think it's annoying as shit to discount that slope guys like Brandon are also huge fucking free riders. It's not like Brandon's never rode big mountain stuff before dude literally committed his life to riding shit like this and it's a hard pill for people to swallow to know that he can crossover between both disciplines and be at the top. It's not like the other more "big mountain" riders there are like "yeah brandons shit is weak" no they definitely celebrate when he does gnarly stuff and have no problem acknowledging that the guy goes big. Why cant you people do the same? I also hate the term big mountain. What the hell does that even mean? Like sliding left and right on shale on a volcano face on your bike? lol. We ride trails people, this was never a competition to highlight some purist form of what you think freeride is. Northshore gave me free ride personally, and to me it was always taking a trail bike or downhill bike and doing something else on it that wasnt racing. Hell fucking yeah that meant doing huge tricks in the woods with your friends.

anchoricex jamessmurthwaite's article
Oct 13, 2021 at 18:35
Oct 13, 2021
Video: Brandon Semenuk Tailwhips a Huge Drop at Rampage [Updated with Slow Mo Clip]
lol is that what freeride is 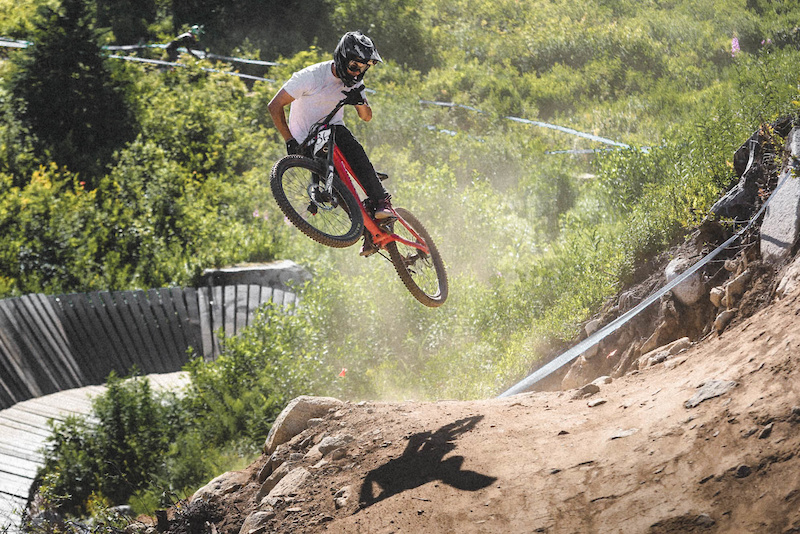