they call me slam hill

chup29 Canyon-PureCycling's article
Sep 22, 2022 at 8:33
Sep 22, 2022
Trailer: Braydon Bringhurst Climbs Moab's Iconic Whole Enchilada Trail in '8600FT' Film
Is there a scene where he gets mad at people for going too fast downhill/not pulling over for him? Wouldn't be a realistic uphiller otherwise and frankly that will ruin the film for me.

chup29 mikelevy's article
Jun 15, 2022 at 13:49
Jun 15, 2022
Review: Granite Hides a Tiny Socket Wrench in Your Steerer Tube
so this is brilliant and i really like it but i cant help but wonder... how do you tighten the headset with the tool if you need a long 5m to reach the bolt? doesn't look like the head of the ratchet rotates, can you use the bottom of the tool carrier if you to reach the bolt? the bottom of the ratchet?

chup29 alicialeggett's article
Mar 30, 2022 at 14:45
Mar 30, 2022
Video: A First Look at The New Vallnord World Cup DH Track
@Konashredder94: Imagine how much better rampage would be if they dropped them at the top and said "ok guys, the winner is whoever gets to the bottom fastest, not the person who does the most dumb flips... oh and you have to stay within this tape that we've arbitrarily marked and an old man with a giant hat will blow his whistle every time you go past."

chup29 alicialeggett's article
Mar 30, 2022 at 12:44
Mar 30, 2022
Video: A First Look at The New Vallnord World Cup DH Track
I'm sorry but that's not steep enough... A flow trail with some rough double track in the middle is not what I, a highly opinionated person on the internet, want. Just so we're clear, I want the last section of the old track, mixed with Champery and Les Gets. I want the riders outside the top 20 to lose control of their bowels mid-run so I can confidently sit on my couch and announce to people who have no concept of DH that "I could do that" and it wont conjure an image of me in tight pants doing a speed tuck in their heads. I want organizers to stop dumbing down every turn with a huge berm and flattening out world cup tracks so the racing is "closer" and more impressive on the 4 live feed angles they chose to film. I want to see people barely survive while crawling down the hill with brakes that are literally on fire. I want to see the fear and relief in the finish arena. This won't provide that and I am sad. Champery in the mud did and at least we got to see that.

chup29 pinkbikeaudience's article
Mar 22, 2022 at 15:45
Mar 22, 2022
LAST CHANCE to Build Your Team Ahead of Round 1 - Lourdes World Cup DH 2022
If I win I promise this comment section that I will publicly destroy that "thing" so that there will at least be one less in the world.

chup29 pinkbikeoriginals's article
Dec 28, 2021 at 15:51
Dec 28, 2021
Video: $180 vs. $1900 Contact Points - Budget vs. Baller Episode 3
crankbrother products are the true meaning of baller because you know that whoever buys any of their trash will end up spending another 200$ on something else almost immediately.

yeah... your ready for boulder hahahaha 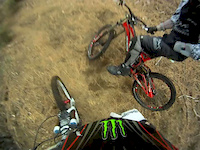