Pinkbike Primer: How Does the Double Header in Maribor Work? 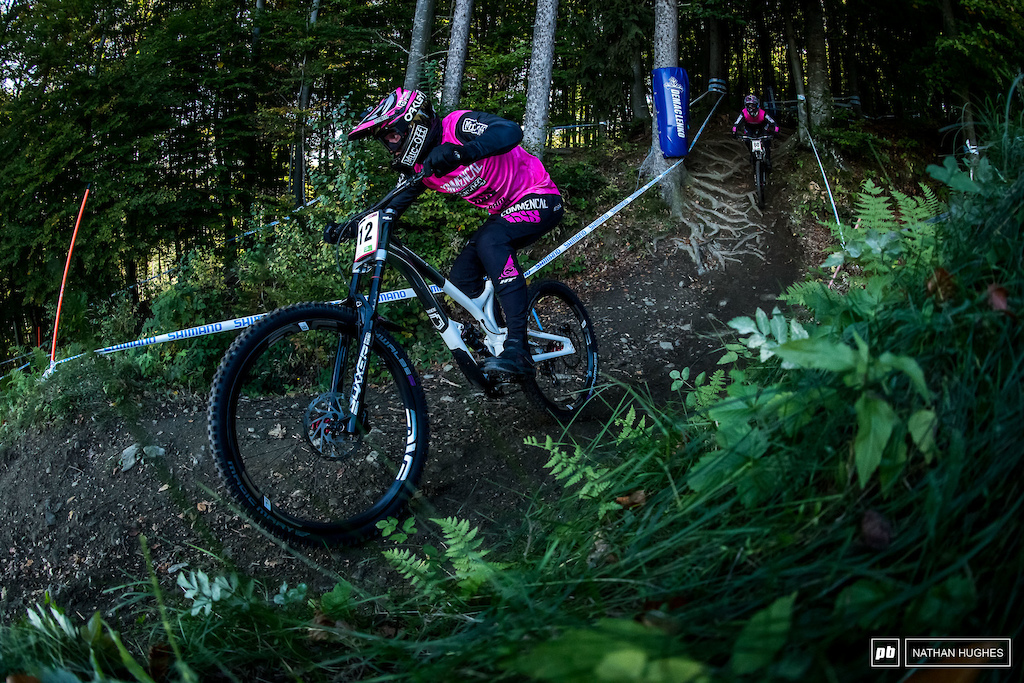 COVID has gutted the World Cup race season so to try and make the remaining races into more of a series, Maribor and the UCI have planned a double header round this week in Maribor. What that means is that there will be two separate rounds with two qualifying sessions and two finals with everything to play for. It's an experiment we have seen working already in other sports such as Formula 1 and the UCI has implemented it at XC World Cups too with the entire season happening in four races in under two weeks at Nove Mesto a fortnight ago.

The basic format will be qualifying Thursday, race Friday, swap tracks, qualifying Saturday, race Sunday. It's going to be a quick changeover with minimal turn around time, so it could bring some interesting tactics into play. Let's take a closer look at the format, schedule and look ahead to Lousa too. 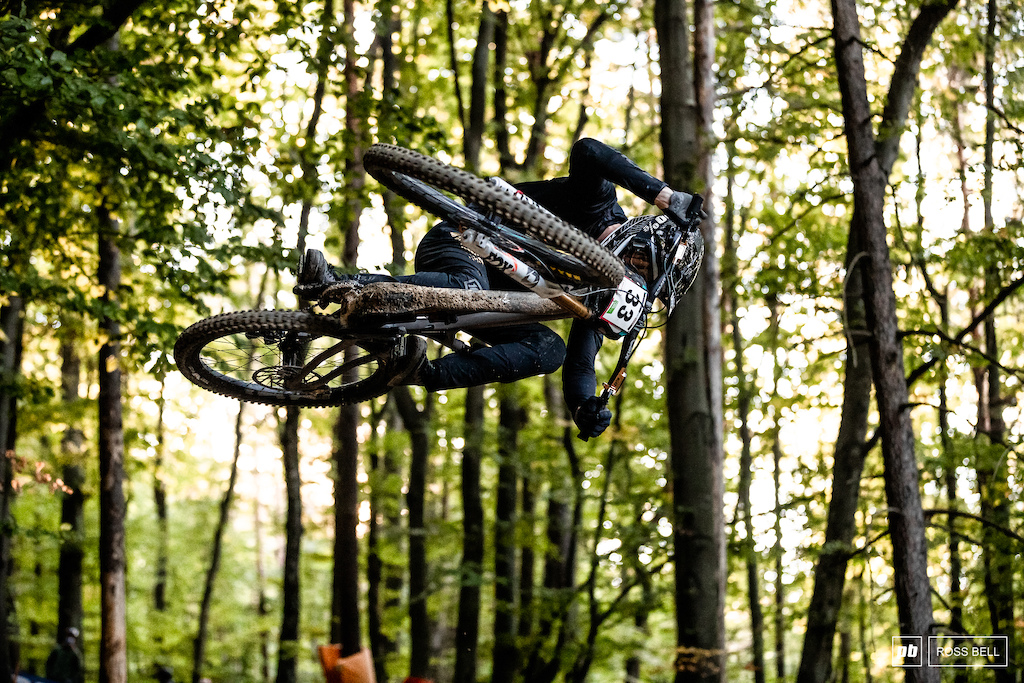 The races will be run on two different courses but they will both have the same start and finish point. In between those two points, the tracks will remain largely the same but there are four sections that have two routes taped through them. Race 1 will take one of these options all the way down and then riders will race through the other options on Sunday.

The first track is the classic Maribor format and is a well bedded-in, fast, hardpack line. The second options are more fresh-cut, loamy and rooty. If the bad weather we've seen so far continues, it could mean another wild ride. 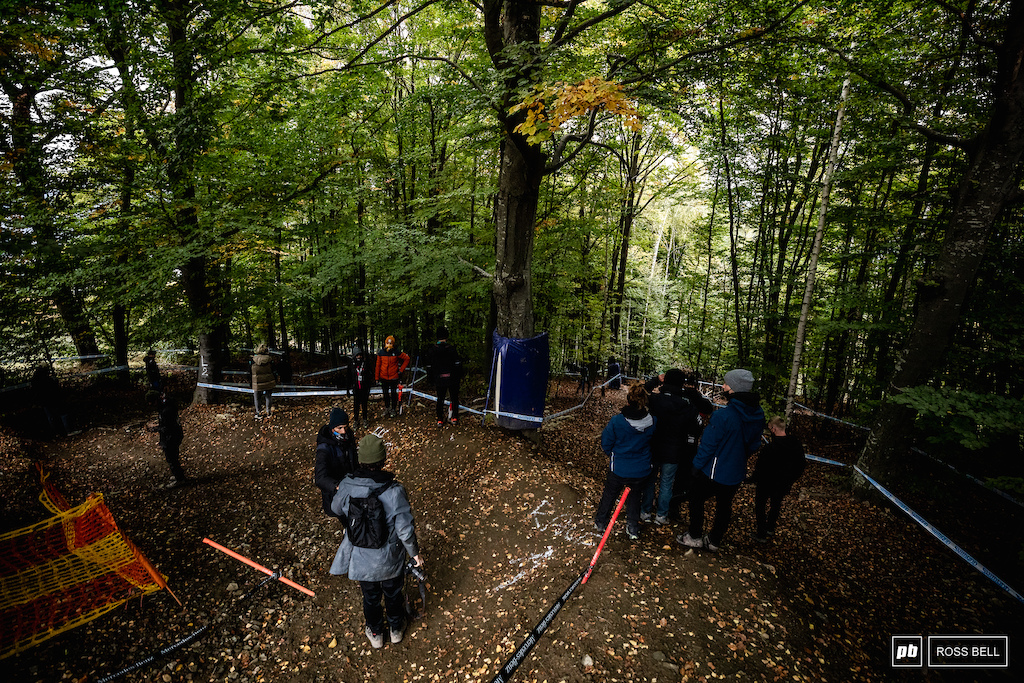 The first track split comes at the entry to the woods.
Riders have already been allowed to track walk both lines and have practiced on track 1 for the past couple of days. Riders will only have 90 minutes before qualifying to learn the second track on Saturday but thankfully it's only four short sections so shouldn't be too difficult. Riders that qualify will then have another hour of practice on Sunday to dial in their lines.

The UCI's schedule is outlined below:

Is There an Overall Series?

Yes, with four rounds currently on the cards, the UCI will be doing an overall series this year. Points will be awarded as normal for both qualifying and race sessions in both rounds. Apparently, if the race in Lousa gets cancelled, then the overall will be called off. More on that below.

Where can I watch the races?

We're back to World Cups and that means no geo-blocking as Red Bull TV is the sole rights holder. That means you don't have to resort to a VPN or an inferior broadcast, just watch this race as you normally would. The times and links are below.

Don't hold your breath. Yesterday the Portuguese Government announced that gatherings will be limited to five people following the resurgence of COVID infections across Europe.

The measures will come into force on Thursday and, with rounds three and four of the World Cup series scheduled to happen in two weeks' time in Lousa, it looks increasingly likely that Maribor will now start and end the World Cup season.

Reuters reported that yesterday the country recorded 2,072 daily cases across 400 outbreaks, the highest number of infections in a single day in the country since the pandemic started. Fines for businesses that do not comply with the rules will be doubled from an upper limit of 5,000 to 10,000 Euros and the government said it would impose stricter restrictions if the spread of the virus did not begin to slow.

The final two rounds of the World Cup series were due to take place on 29 Oct to 1 Nov in Lousa, Portugal. We have reached out to the organizers for more information on how this will affect the race and will update you when we get it.

nismo325 (Oct 15, 2020 at 13:23)
I like complaining too but lets be real. The prize money isn't enough either way to make or break a racer and entry fees are paid by the teams. The small amount extra they are paying/not making winning are nothing compared to the sponsorship deals that could be lost by places not having races at all. lets just be happy this season is being somewhat salvaged to keep all the racers and employees working who could all have been fired if this wasn't happening.

Rudy2455 (Oct 16, 2020 at 1:07)
@nismo325: You have highlighted the second issue, which is that the prize purse is an absolute joke. This is a joke compared to other sports, but also compared to other UCI Cycling disciplines.

So while you're 100% correct, the solution is to demand more realistic prize purses, it isn't "well, it's really peanuts anyway, the riders don't need that money." Not to mention, if you're a privateer, or even someone like World Champion Camille Balanche who is on a smaller team and probably not very highly paid, another 10k in your pocket is significant.

They should try asking Gurbanguly Berdimuhamedow for a hand-out

Will-narayan (Oct 17, 2020 at 5:55)
@Rudy2455: I don't know the prize purse or anything but I'd argue that it's more the other sports where it's gone crazy, as at the end of the day it's just sport (yes they're taking risks but it's not like they're nurses saving lives, neither am I). Anyway I'm not gonna change the world with a single comment, I just wanted to give a different perspective.

Tormy (Oct 15, 2020 at 11:44)
I love racing, watching the feed I root for every rider. Who ever is up next I hope wins, they are all so f'n talented and fast and all deserve to do well. Best of luck to all the riders.

kelpaso (Oct 15, 2020 at 14:01)
Mountain biking is so great like that! I’ve started watching a little UFC and I was really surprised when I saw how toxic the fans are. They trash talk and insult the guys they don’t like. It’s really off-putting coming from the awesome world of MTB.

I do have a dozen or two favorites, but somehow at the same time always kinda want to see Minnaar win.

ghirox85 (Oct 16, 2020 at 0:20)
@enduroNZ: and your statement is based on what? You can assume that people like @madfella are the problem just because he asked a more than legitimate question?
In the meantime keep saying “f*ck Covid” and “down with Covid”. That surely helps

BikesBoatsNJeeps (Oct 16, 2020 at 3:02)
We could throw some "thoughts and prayers" in there too to really solidify the effort.

Madfella (Oct 20, 2020 at 15:05)
@enduroNZ: I understand you're anxious enduroNZ, and to be honest I don't blame you. We're being bombarded by messages of how scared we should be, and how this is a truly deadly disease.
It pays to always take these messages with a grain of salt though. The popular media, an industry that was in serious trouble, is now enjoying much higher readership ratings. So straight away their motivations are not always trustworthy.
Social Media as we know feeds us algorithms to keep us afraid and returning to their product. There are a number of groups that benefit from freaking us out, least of all popular governemnt.

I know you don't know me from a bar of soap, but please take the time to listen to this 20 minute podcast from the BBC Inquiry. It was recorded a year before Covid, and is very illuminating. I am not saying that Covid is not dangerous, just that there are many things that can kill us and that we have got out of whack on this one.
www.bbc.co.uk/programmes/w3csytft

All the best, and most importantly stay positive!

Point1Athletic (Oct 15, 2020 at 12:13)
Riders have not been allowed to practice on both tracks the past two days, the decision was made by the UCI, based on feedback from riders and teams, that track 1 and 2 would be practiced separately. This means that the changes for track 2 that account for about 40 sec total. Will only be practiced on Saturday and Sunday mornings. #FACTS

chriskneeland (Oct 15, 2020 at 12:02)
This is wild. I wonder what each rider's strategy is. Do you only focus on one track until the race? Do you split your time evenly between both tracks? Do you lose your race pace on one track after practicing the other? C'mon Wyn. We need answers!

sadfusde (Oct 15, 2020 at 12:05)
It's not looking good, it's true. Things are kinda crazy right now, but let's hope that within two weeks it gets a little under control. Tbh, we are not that many either, at this pace, there will be nobody left to get infected by then xD

conoat (Oct 15, 2020 at 12:38)
@sadfusde: isn't it funny how it went from "14 days to flatten the curve so the hospitals aren't overrun" to "you can't have your life back until there are zero cases of Covid and/or there is a vaccine"?

Can't believe they picked this year to add it to the calander. Would have loved to have gone. Actually, i cycled past the racetrack last time i was in portugal.

sadfusde (Oct 15, 2020 at 14:26)
@DidNotSendIt: Yep! And F1 is coming too. October 25th I believe. If neither of those events gets canceled, there's no reason to believe the DH will... Sadly, this is the first year in a long time that so many classic and loved sports are coming here, and the public, most likely, won't be allowed to watch

sadfusde (Oct 15, 2020 at 14:32)
@conoat: this is happening because the government eased up pretty much all the measures taken by the first wave. Doctors were warning that a second wave was certain, but Portugal really needs that summer money, so, pretty much everything was allowed again (weddings, concerts, gatherings,...) and now, here we are again... Going back to a lock down is not the answer, applying effective measures and staying consistent is, which has not been happening. Let's hope this situation is an eye opener and that we won't need to get through this once again in the future. Right now, we're already on the second wave so, might aswell just hold on and wait for better days.

ghirox85 (Oct 16, 2020 at 0:11)
@conoat: you should know better by now than to express dissent on Covid restriction policies here on Pinkbike. Your comment will get downvoted and your day will be ruined

Wheelersmtbholidays (Oct 17, 2020 at 13:28)
@sadfusde: not sure where you are getting your info from. The lousa team are working hard on the track and pit areas for the race to go ahead. Check out Louzanpark instagram. Our home track and we are excited for the World Cup

sadfusde (Oct 17, 2020 at 15:16)
@Wheelersmtbholidays: Might want to read that again mate... I said that if neither F1 nor the MotoGP get cancelled, there's absolutely no reason for the DH WC not to happen. Honeslty, I'm really cheeering for you guys, this is huge for the national mtb scene! If spectators are allowed, you bet I'll be there

slayerdegnar (Oct 15, 2020 at 13:38)
Well, at least the weather looks better than anticipated. Should be some good racing!

sarahmoore Mod (Oct 15, 2020 at 15:03)
Not between the rounds. You can change your fantasy team right up until the start of the first race but then both rounds will be combined.

miguelcurto (Oct 15, 2020 at 16:27)
@sarahmoore: weird,it was locked already, was it unlocked later?Lots of people are going to get caught off guard.I only noticed after reading this...

nojzilla (Oct 15, 2020 at 21:36)
If you need to know how a double header works..
Your'e dumb
Cheers PB (saarcasticthumbsupemoji)
Post a Comment