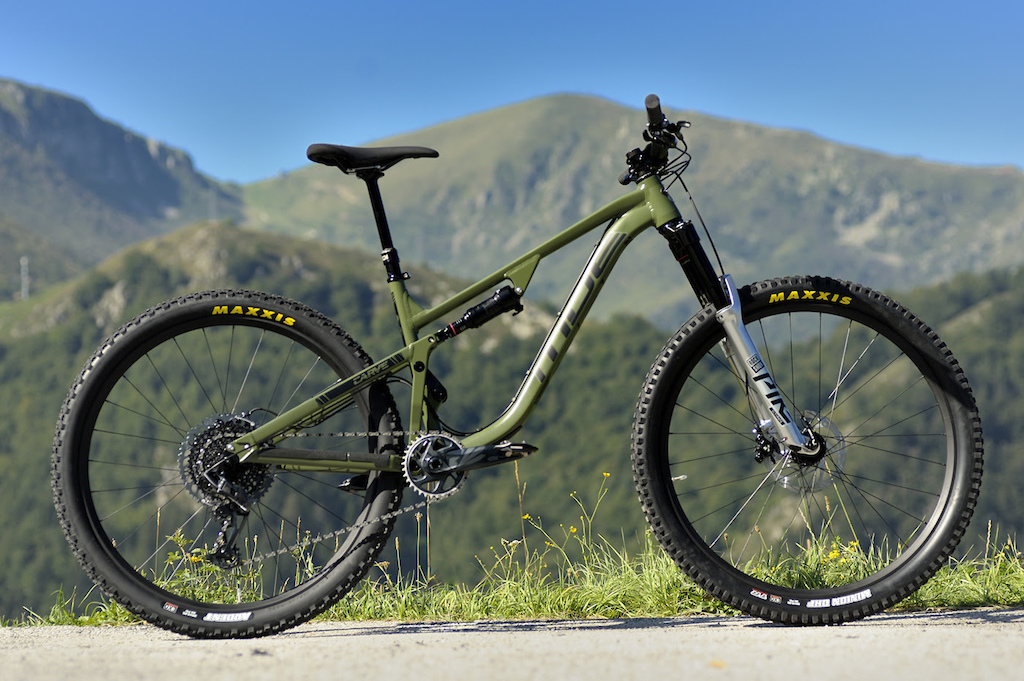 Following his recent collaboration with Gamux bikes, Federico Biora, of Italy's MDE Bikes, has updated his own range of bikes with a totally overhauled Carve trail bike and some updates to the Damper.

MDE frames are completely handmade in the workshop located at the base of the Susa valley close to Turin. As the frames are made in Italy, Federico offers standard geometries for 29" and 27.5" wheels, but the bikes are also customizable including geometry, colors, details, components for a €180 fee. 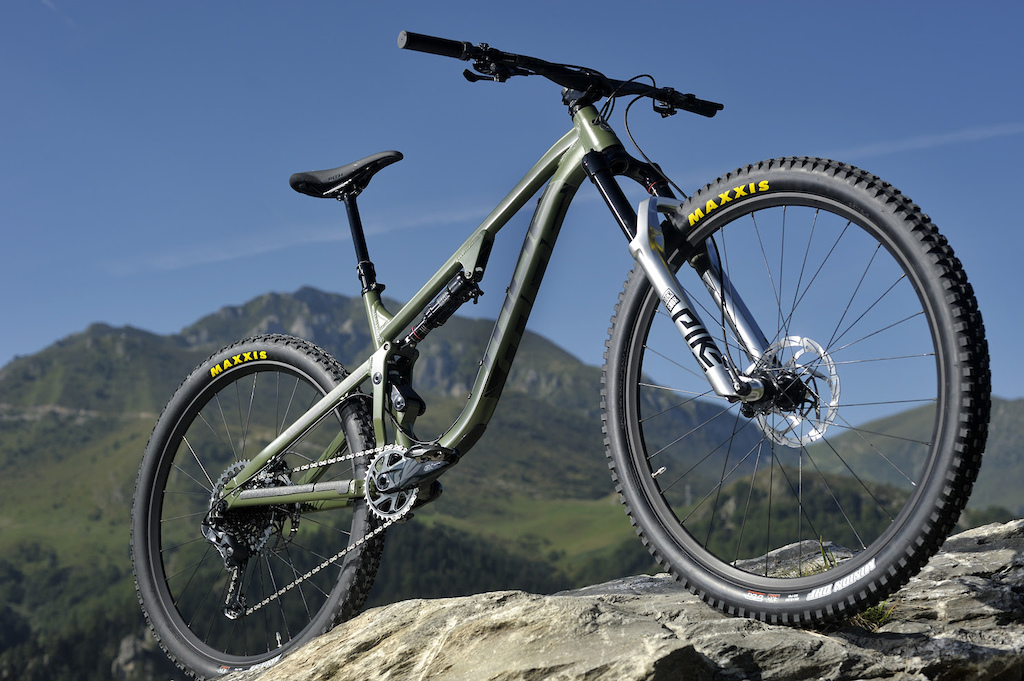 The Carve has a new front and rear triangle and has adopted the suspension linkage from the Damper to become a modern aggressive trail bike. The geometry of the bike has seen the largest overhaul, with the standard 29" version of the bike based on a 140mm travel fork having 5mm shorter chainstays, longer reach, 77.9° seat tube angle and 65.5° head tube angle. The bike can also be run as a 27.5" option though, based on a fork with 150mm of travel and that has a seat tube angle of 76.5°, reach and top tube similar to 29", a head tube angle of 65° and a BB height of 342mm.
MDE Carve Details

Also new is a re-shaped swing arm to help with mud discharge and cleaning, a straight seat tube to allow for longer dropper insertion and new external cable routing that can be concealed with a removable 3-D printed cover to protect the cables from dirt. 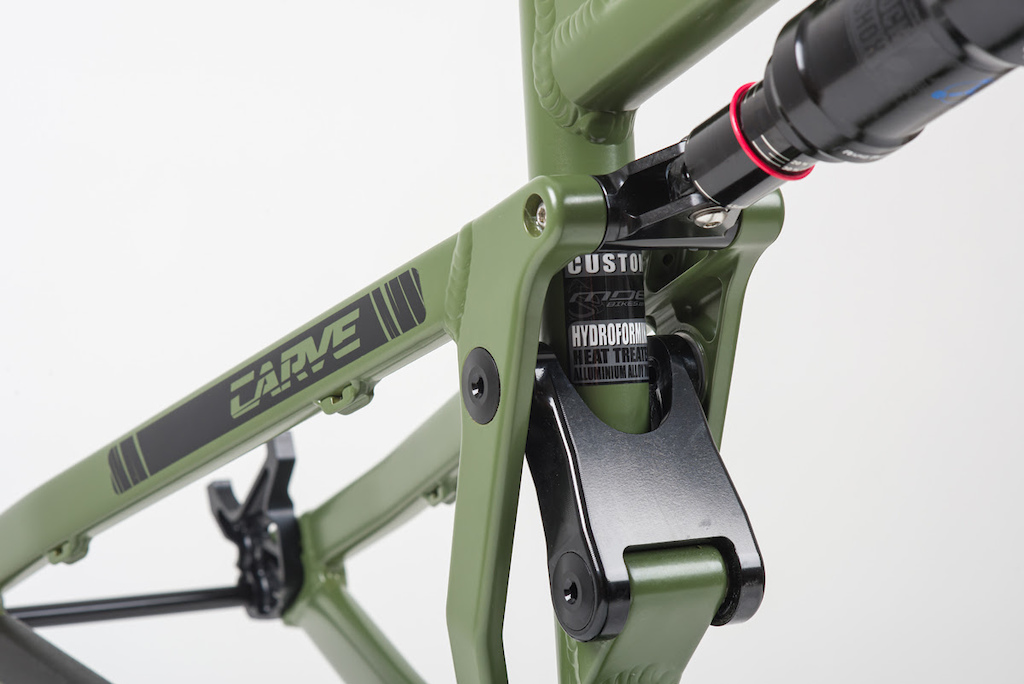 The new CNC'd upper link was carried over from the Damper. 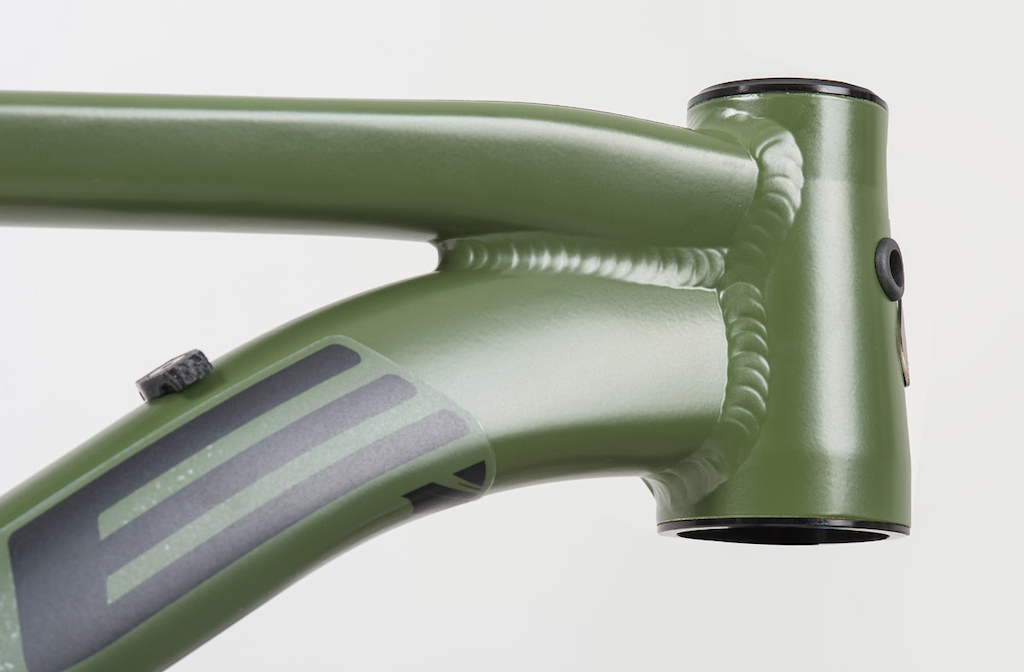 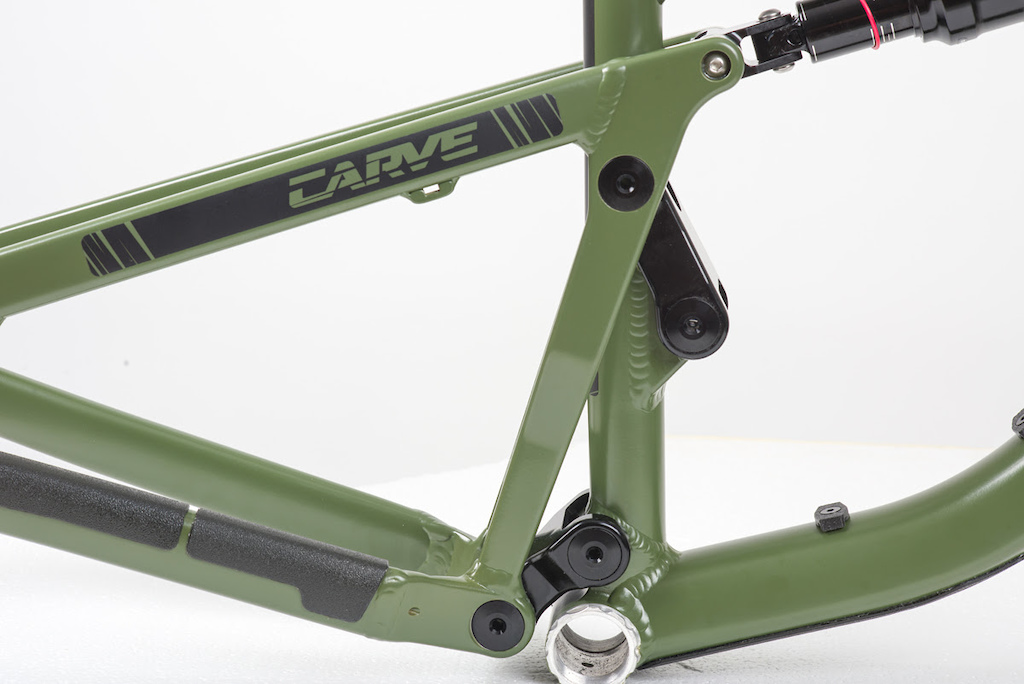 The short links that drive the Carve's suspension. 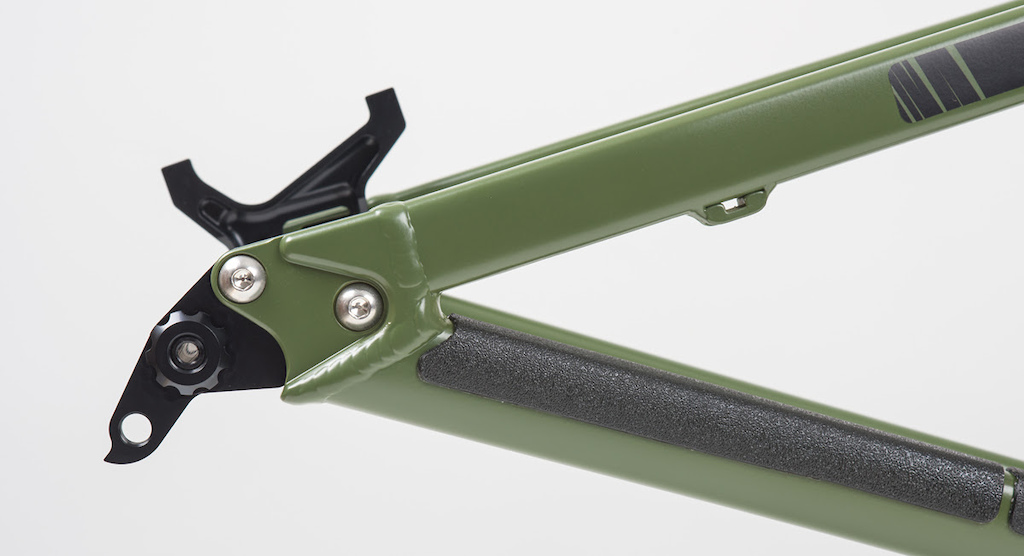 The chainstay protector is also new and 3D printed
The MDE Carve is available now for €1,890 as a frame only or €4,390 for a race build that includes Rock Shox Pike Ultimate RC2 DebonAir fork, Rock Shox Deluxe Select shock, a GX drivetrain and Maxxis tires on MDE wheels. An A La Carte spec build is also available as is custom geometry. 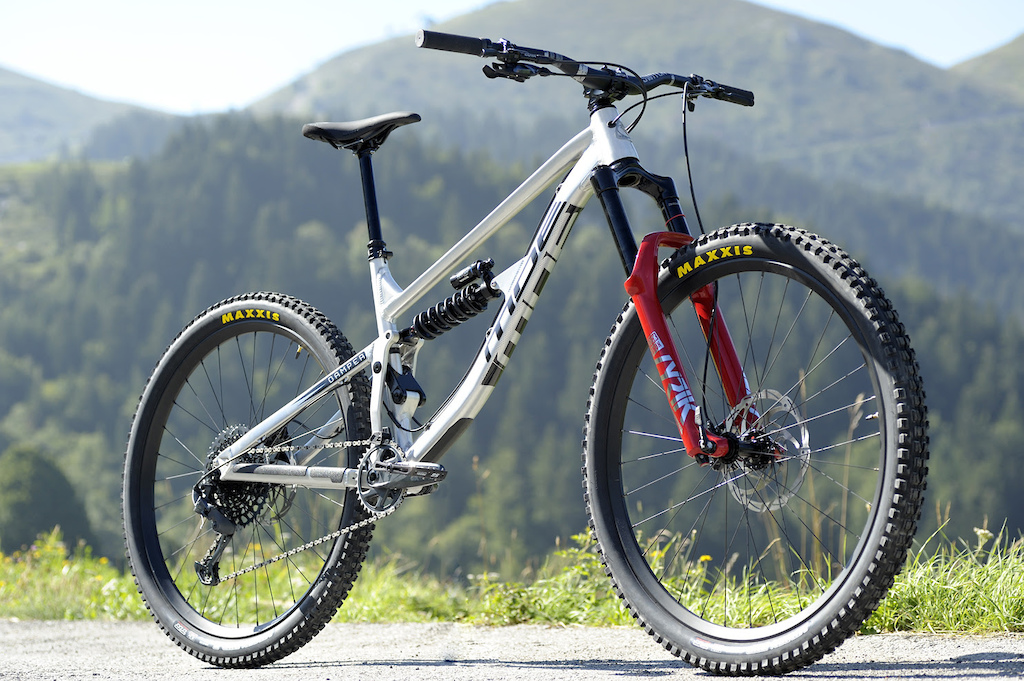 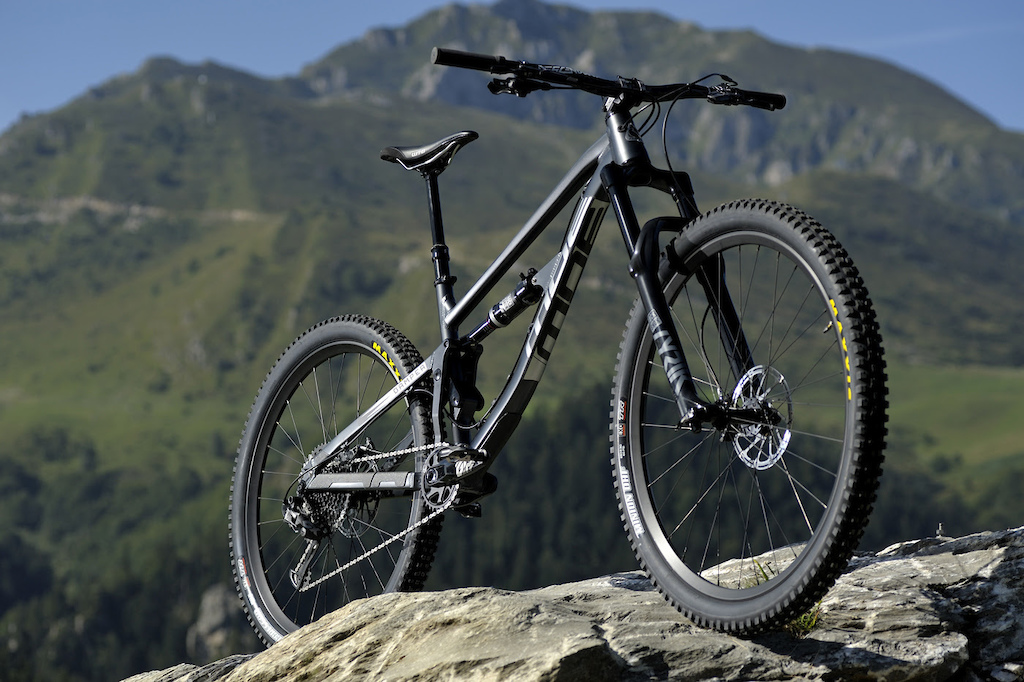 The AM spec has 10mm less travel front and rear and an air shock.
MDE is also now offering the Damper in 2 different spec levels, a 155mm air-sprung All-Mountain version and a 165mm coil-sprung Race spec. Both builds are 29ers but the All-Mountain version has a 160mm Rock Shox Lyric Select RC DebonAir fork and Rock Shox Deluxe Select shock while the Race version has a 170mm Rock Shox Lyric Ultimate RC2 and Rock Shox Super Deluxe Coil Ultimate.

goroncy (Sep 18, 2020 at 14:01)
This brand is horribly underrated. I regret that I didn't buy Damper in 2016. The geo looked just to strange. Who knew that this will be how everybody builds their bikes in 2020. I had a chance to ride this thing later. Kills my Tracer in every possible way.

x-rider (Sep 20, 2020 at 11:51)
I still love my damper and prefer the overall handling over the capra 29 2019... Federico is also a very nice person who can direct you to what you should ride and spec. It just happened that the damper 29 was not available when I wanted to get a new bike... But I will go back to MDE without hesitation.

Hopefully they can sort the insurance out!

goroncy (Sep 19, 2020 at 13:07)
It's not a bad thing. Instead of waiting tell them that you want to be their distributor in Canada. The bikes are top notch. They withstand Alps. Should withstand your trails too.

trackingadventures (Sep 18, 2020 at 13:02)
After 3 seasons of Damper, I'm seriously considering a Carve for a lighter all around bike... And I will have my Damper revamped and repainted over winter by MDE, ready for a 4th season

Skilldream (Sep 19, 2020 at 13:39)
I'm 6'4". This geo is almost useless. 78 deg STA is too steep, I wish there was a shot here of this thing in XL set up for a tall rider. It would look, and is ridiculous. It would need a 210 dropper and anything but steep climbing would be terrible. Even going down, I would want a more slack HTA, given my COG on this thing. I read and listen to Kazimer, he's rational, and he loves ex steep STA's, which makes sense he's right at the height limit 5'11"-6' where it maxes out . Much over 6 feet and this game changes.

Mrtrotter (Sep 19, 2020 at 6:19)
I had a Damper frame briefly. Super capable downhill and very well made but weighed a fair bit more than expected. Ended up selling it on flea bay for peanuts.

rafallied (Sep 23, 2020 at 9:10)
if only Damper top shock mount would be like in Carve on under the top tube - then plenty space for water bottle

What I mean is a woman's version of the frame.