Jcmonty alicialeggett's article
May 2, 2022 at 10:08
May 2, 2022
Video: 4 Value Hardtails Ridden & Rated - Field Test Roundtable
I got a short ride on my hardtail this weekend for the first time in too long as a relatively steep, tight and loose trail in the woods . It's Banshee paradox setup with a 150mm fork, mulleted because I am currently lacking functioning 29er wheels. I forgot how fun it can be! It's more on the enduro spectrum of hardtails, but it feels like much less of a bike when compared to my 170mm sled. I am definitely slower, don't do as many features, and feel more sketchy on anything chunky, but dang it's fun. It's a cool tool to have in the shed, and I will benefit if I actually ride it more. But all of that being said - my bigger bike is the one I will pick most of the time as it covers my flaws as a rider much more, which to me - lets me ride harder trails with less anxiety.

Jcmonty mattbeer's article
Apr 13, 2022 at 8:44
Apr 13, 2022
Review: EXT Arma Downhill Coil Shock
I had an EXT Storia V3 on my last bike. My only compliant with that was that it was I found it a tad bit firm on the smaller bumpers, chatter, etc. Based on anecdotal info, most average riders I have read seem to think it's on the firm side (not harsh, mind you, especially at speed). If I hadn't sold it along with the bike, I would have had it reshimmed. The E-storia apparently works on the sensitivity a bit as well. The HBC was awesome for my linear-ish bike. The turbulent flow noise was actually kind of nice as you knew the shock was working. Paired with a Sprindex coil, fine-tuning was super easy for a specific track. Overall, the rear performance was better in most scenarios than my X2 on my new bike (with 170mm vs. 150mm on old, and a more progressive leverage rate), which has already had a leak. Dang.. did i just talk myself into buying a new coil? Mah.. 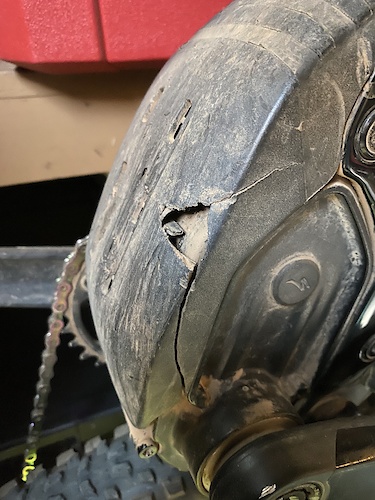 Jcmonty TEBP's article
Jan 18, 2022 at 9:02
Jan 18, 2022
The Chickadeehill LFB6 Shock has 2 Positive Air Chambers
Isn’t this what EXT is doing with their upcoming air shock as well? Two positive chambers? I am a fan of that design on forks (Had a lyrik with a DSD Runt and now have a mezzer with IRT).

Jcmonty mattbeer's article
Dec 3, 2021 at 16:00
Dec 3, 2021
Pinkbike Poll: What Do You Perceive to Be the Riskiest Outdoor Sport?
My buddy recently and a crash para-sailing.. ended up almost dying and having full reconstruction of his pelvis. We are grateful he is still here with us and looking to make a full recovery. Just had a little screw up on a landing. Gravity always wins

Jcmonty alicialeggett's article
Nov 19, 2021 at 8:54
Nov 19, 2021
Round Up: 6 Made in the USA Cranksets
@RadBartTaylor: Ebike cranks mount to the motor shaft and vary between manufactures on the interface.

Jcmonty seb-stott's article
Nov 5, 2021 at 15:28
Nov 5, 2021
Pinkbike Poll: How Much Further Should the Longer, Lower, & Slacker Trend Go?
@pink505: I know this was said in jest.. but i could see an "autonomous" shapeshifter concept in the future. Steeper/higher BB for climbs and bike adjusts automatically for the descents to slacker/lower/longer

Jcmonty jamessmurthwaite's article
Oct 26, 2021 at 8:24
Oct 26, 2021
Atelier Suji Releases a 'Hardcore' Version of its Wooden Hardtail
I think that you would be very poplar on the trail.
Load more...