Justin Frey with the prototype Fox 40 RAD fork. Frey has been there for every step of its development process.

How long as the 40 RAD been in development? The original Fox 40 is nearly a pound heavier than the RAD prototype on the right - and yet Fox says that the new chassis is at least as rigid.

What are the major differences designed into the new 40? 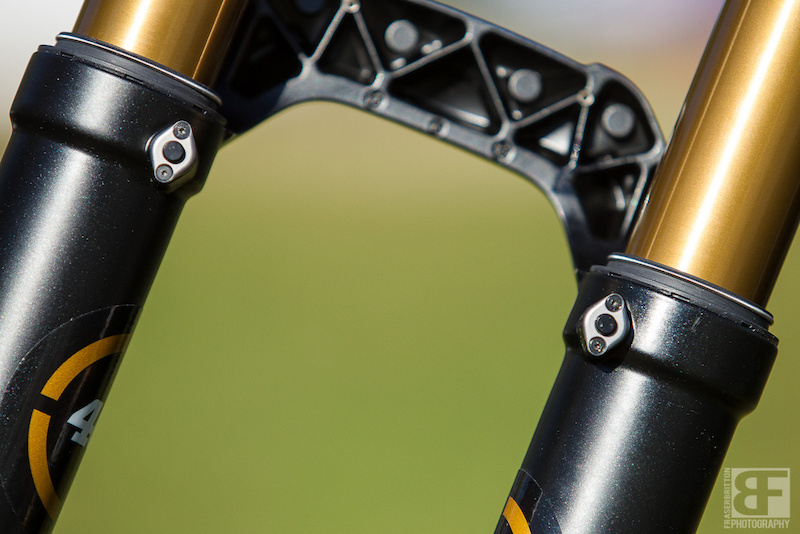 Air-bleed valves on each side of the lowers.

Is the 40 RAD still in the R&D stages, or is it dialed in enough to be ready for production? 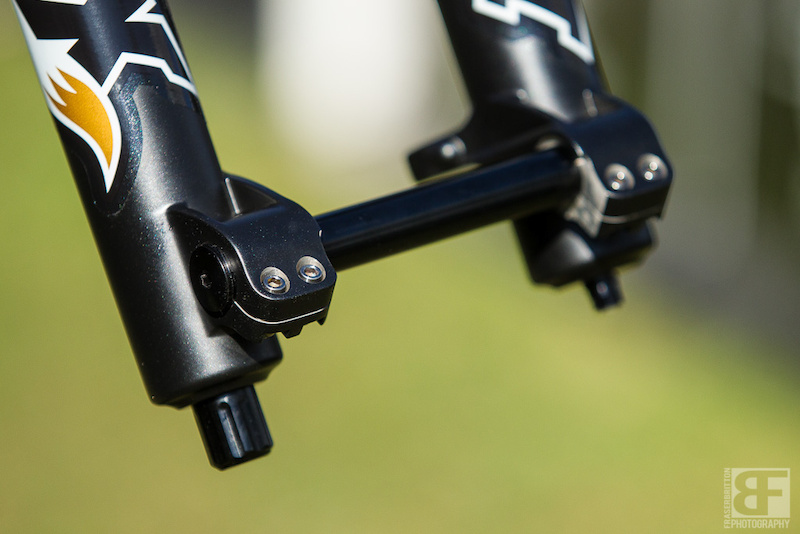 The new dropout system is much more compact.

How much influence have Fox-sponsored athletes had in the development of the 40 RAD? 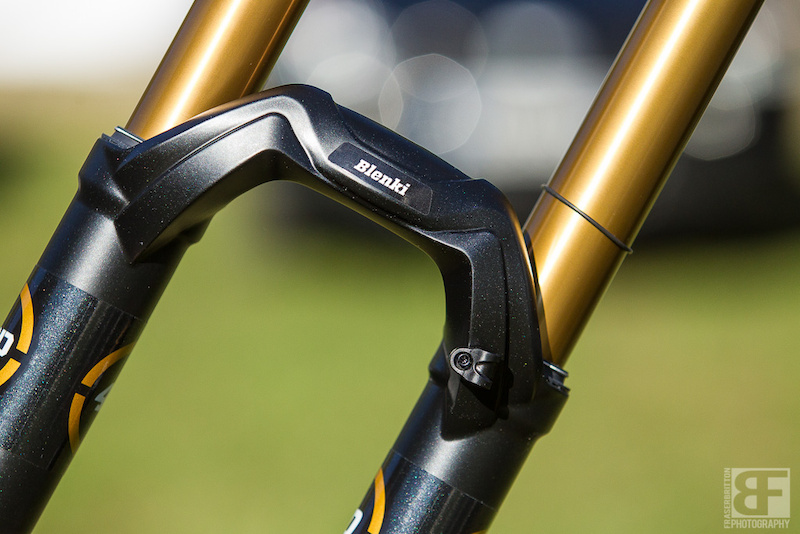 Each racer gets a custom name plate on the crown.

fantaman (Jul 29, 2012 at 20:54)
So it would be comming in at almost an Boxxer WC weight but than stiffer & stronger,good job Fox that is what i call a fast step forward.

lowers are slimmed down. if people were having puncture issues before, will slimmer walls not make that easier?

other than that it looks AMAZING, props to fox for pushing the envelope on this fork.

boylagz (Jul 29, 2012 at 23:18)
I saw a RAD 40 at the Northstar bike park 2 weeks ago. It looks sleek, and that unmistakeable arch. Guessing the dude who owned it was either a test rider or Fox employee. Matched perfectly on the V10c it was on

pbuser274424 (Jul 30, 2012 at 0:12)
While absorbing bumps fork is vacuuming some air through seals. Pressure is increasing and for become more firm, and less sensitive to small bumps/rocks etc. You will can push this little button below seals and release some air from the fork so it will can work normally

I don't know why, but this just makes me want it more...

i bought a set of 36 180s and for the full rc2 fit version it was 120 cheaper than the top offerting from zocchi 66 rc3 ti..... and it is just better....fox's "entry level" arnt... what youve got to remember is that alot of rockshox and marzocchi forks have pathettic dampers that drive the costs down.... i cant say ive ever ridden a fox fork that didnt feel good... thats just the thing... to get a rs or zocchi fork of simalar performance you have to shell out every bit as much, if not more!!

taletotell (Jul 30, 2012 at 3:51)
"The plan is for it to be a 2014 model." and as a result no one will buy any more new forks until then. No one wants to buy the current model (sweet though it is) and then find out that if they had waited a year they could have dropped a pound!

DHshredder5 (Jul 29, 2012 at 20:44)
Yeeeee Fox! Still proving that even the best can be improved upon. I was a little worried after that CTD thing that they'd lost their touch, good to see I'm wrong!

shishka (Jul 30, 2012 at 7:09)
Good idea testing this piece at plattekill-the roughest mountain in the universe. Did fox splurge this time and use actual oil seals???? I doubt it. See you in 2018 when fox starts using oil seals.

shishka (Aug 1, 2012 at 6:29)
We ride all over the world from whistler to france and one thing still remains the same. Plattekill mountain has more obstacles per square foot than any other mountain east west south anywhere. Get rad wherever you ride but must check platt to get your full stripes.

Rethonal (Jul 29, 2012 at 21:53)
They release the air pressure that builds in the lowers when the fork and oil heat up. The expanding air dampens performance, so the valves bleed off any excess.

Rethonal (Jul 29, 2012 at 22:35)
From the various stories I have heard, yes, it is automatic. But I've also heard a rumor that you can manually release the valves by pressing them in.

finnrambo (Jul 30, 2012 at 19:30)
nope but if you unscrew the top cap on the damper side and push it down 40-70% into its travel you can get it nice and plush as long as you stay within those numbers anyway

finnrambo (Jul 30, 2012 at 19:58)
just thought of something, can you buy one of those dorado/boxxer air springs and swap them in instead of a coil?

Lehel-NS (Jul 30, 2012 at 23:17)
A good idea, and I think that with a little machining knowledge it could be done. You would first need to make a new top cap, and maybe modify the down one too. Other than that, I don't see why it couldn't be done?

Sshredder (Aug 1, 2012 at 9:33)
EOpen bath dampners on marzz forks and the Fox 40,s use air and a coil as a spring. The internal pressure also effects the dampning. Almost all forks with a good seal will build up air pressure and will benfit from burping out the air. By the way with marzz forks you can just take out one of the springs and add some air many of the Marzz forks came with an air valve for increasing the spring rate. I would not recomend taking out the coil in the Fox 40,s the dampners are dialed in to work with springs.

That's a good thing on Marzocchis, you can swap cartridges between almost every fork with the same leg diameter, and pull out springs just like that (just not from the side with the neg. spring).

Martin-McInerney (Jul 30, 2012 at 9:24)
Has there been any info about the fox upside down fork or whatever you want to call it? I remember seeing something about it last year.

Downhill340 (Jul 30, 2012 at 9:46)
If I remember correctly , they couldn't find any big advantages to their USD fork, so they didn't bother going further with it for the time being.

Martin-McInerney (Aug 3, 2012 at 4:01)
Ah right, I thought it could have been good considering the MX background

robfd3s (Jul 30, 2012 at 9:45)
my 2011 40 is pretty rubbish, constantly losing front wheel grip despite trying all sorts of damping settings, if I set it slow it packs down and rides harsh, if i set it faster it bobs dangerously through compressions, bottomline is that it just doesnt absorb bumps that well and is a slow fork, you can feel it letting the bike down compared to the rear end which is V10 carbon with Fox rear damper, had better performance out of my old TF tuned boxxers from 07/08 so wont be investing in Fox forks for 2013/14, going for BOS or Bombers this time around.

nzstormer (Jul 30, 2012 at 16:18)
Proper suspension set up matters more than you can imagine. Find an expert (not just a guy at your bike shop, but a real expert), and get it set up for you. I have no idea who does it in UK, but for anyone in Vancouver, go see this guy when he gets healthy again (Concussed right now) suspension-therapy.com

mtnbykr05 (Jul 31, 2012 at 10:29)
You could try setting it up with more preload, or less low speed compression. Your preload will make it softer initially in the travel, aka better small bump compliance. Low speed compression holds you up in the travel during rolling whoops, corners, and g-outs. Less low speed damping will put you further down into the travel, allowing for more traction when suspension is compressed on corners/berms. However, with too little compression your fork will dive through berms and when braking.

baca262 (Jul 30, 2012 at 10:22) (Below Threshold)
it you need to save up for it then you definitely don't need it. everything fox is way overpriced and way overhyped, in reality it's marginally better than the rs stuff and best looking out of the crowd, it's a freaking iphone.

baca262 (Jul 30, 2012 at 22:50)
car, pc and house is what you need for life in general and are well worth saving up 2 years for but a mtb fork that should be much better than it is considering it's price isn't. on the second thought, they might turn out to be MUCH better than the current 40's but i wouldn't hold my breath.

abgreenbank (Jul 30, 2012 at 13:49)
I saw these forks on Emilie Siegenthaler 2013 scott gambler when she was behind me in the queue to a bike lift in moraine, looked amazing!!

o-l-a-v (Jul 30, 2012 at 15:01)
Will they make the 34mm edition, totally redisigned, full-blooded dirt fork that everybody wants? With similar style lowers?
Thats the question

groghunter (Jul 30, 2012 at 6:37)
Marzocchi Shivers have bleed screws in the top caps for the same purpose.

baca262 (Jul 30, 2012 at 10:14)
this is exactly why mtb suspension manufacturers get away with ridiculous prices - people don't know shit about suspension.

bmbracing (Jul 31, 2012 at 15:05)
The Lefty has had automatic air bleeding pretty much from the start 10 years go, I think - bleed holes with a filter to keep the crud out, to transfer the air both out of and in to the upper as the stanchion moves. Can certainly hear how much air gets displaced on mine, pssst pssst, haha!

BrigadierBuege (Jul 29, 2012 at 22:08)
Seriously? I highly doubt that. The application simply isn't there to start, among a zillion other reasons.

BrigadierBuege (Jul 30, 2012 at 2:43)
^ Really now? Let me point something out to you...tell me which downhill frame will you be putting it on that is designed for 650b wheels? Have fun finding downhill tires and downhill 650b rims with through axle setups that can hold up as well.

BrigadierBuege (Jul 30, 2012 at 11:40)
Yeahhh I'm sorry dude, I don't know why I got so defensive over that...probably because it was 3am and I was tired as hell. Didn't mean to be so argumentative

Gruta (Jul 30, 2012 at 13:11)
Well, 2014 is still a year and a half away, so what happened to 29ers on XC can also come to DH or Enduro in the time being, regarding 650b, judging by the polls here on pinkbike. Personally, I cannot justify to myself ( ok, maybe I could if I really wanted it) that, buying a new standard is going to improve my riding.

groghunter (Jul 30, 2012 at 21:52)
I am SO not down for another axle standard... seems like that's the new way to incite gear lust, just make some new standard, oval wheels or something...

groghunter (Aug 1, 2012 at 21:34)
Just thought about it for a sec and: I can't think of a way to make the clamps lighter than pinch bolts.
Below threshold threads are hidden

vroomvroompartystarter (Jul 29, 2012 at 23:06)
I can see some damping issues happening on really sketchy tracks with a lot of fork travel. The lowers being so thin, and so close to the stanchion is not going to help with heat dissipation, which is going to affect compression/rebound. Would really like to see them address that aspect for product longevity.

But on a side note, that is a damn sexy fork!

finnrambo (Jul 30, 2012 at 16:00)
exactly^ although I think he means they should add cooling fins which would look ugly and get the pound back up

alazamanza (Jul 31, 2012 at 16:45)
its not oging to effect the dampers even if that level of heat could be put into them, the cartridge is separate from the damping oil so it wont heat up, the air spring will get marginally stiffer but seeing as it is a hybrid air system and its got 40mm stanctions to house the air spring (massive volume air chamber) the pressure should be fairly low and therefore not have too much suffering from heat build up anyways

dirtworks911 (Jul 29, 2012 at 23:59)
Summit800, take your headset completely apart and check if your bearings are shot (don't roll smooth), remove the dust seals the the bearings and put as much grease as you can in them. After cleaning all your headset parts so they are dirt free, lube up the outside of your bearings, so there's no metal on metal, then tighten in all up again. I feel that will fix you problem.
Post a Comment