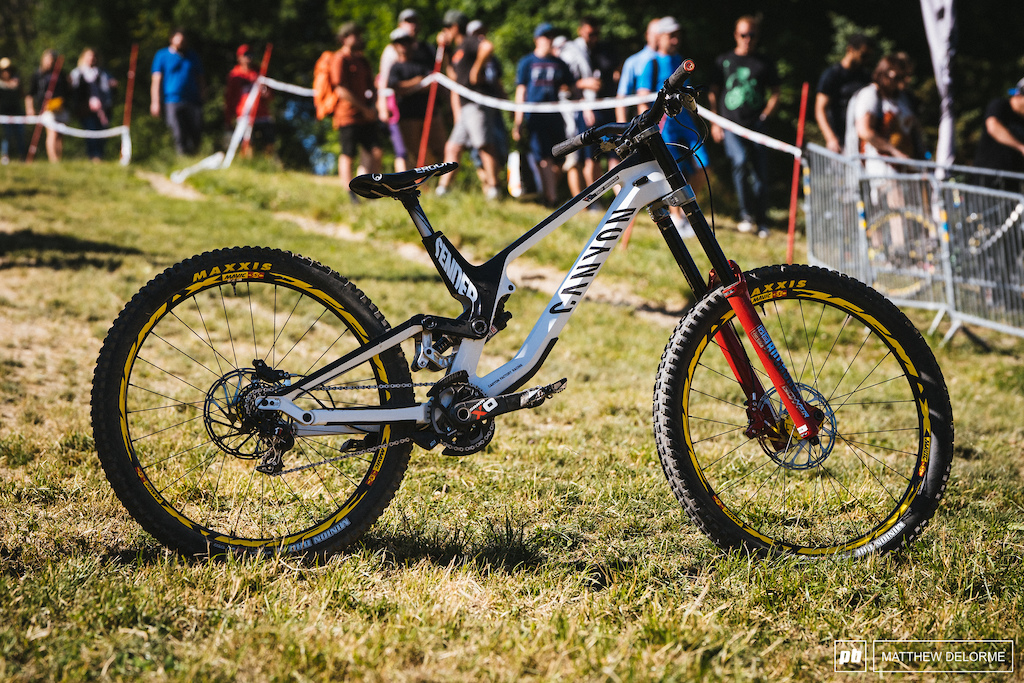 Troy Brosnan and his M-sized Canyon Sender reigned over the Supreme from Commencal and Amaury Pierron who won the previous two World Cup Downhills. 0.97 seconds was the difference between first and second, which is a big margin compared to the extremely close racing we have been seeing this year. 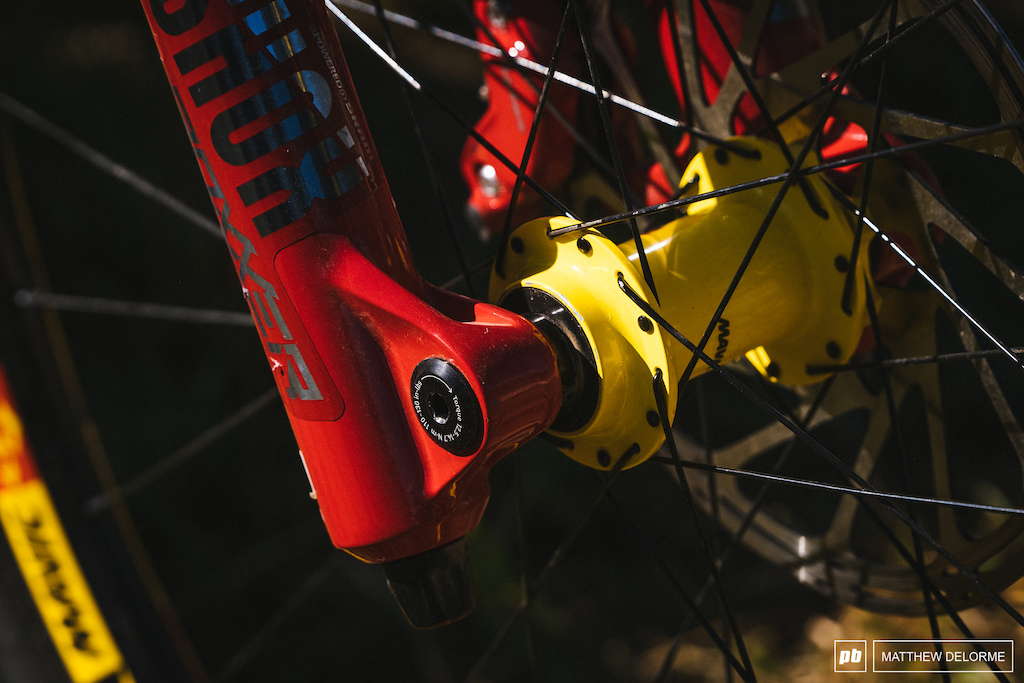 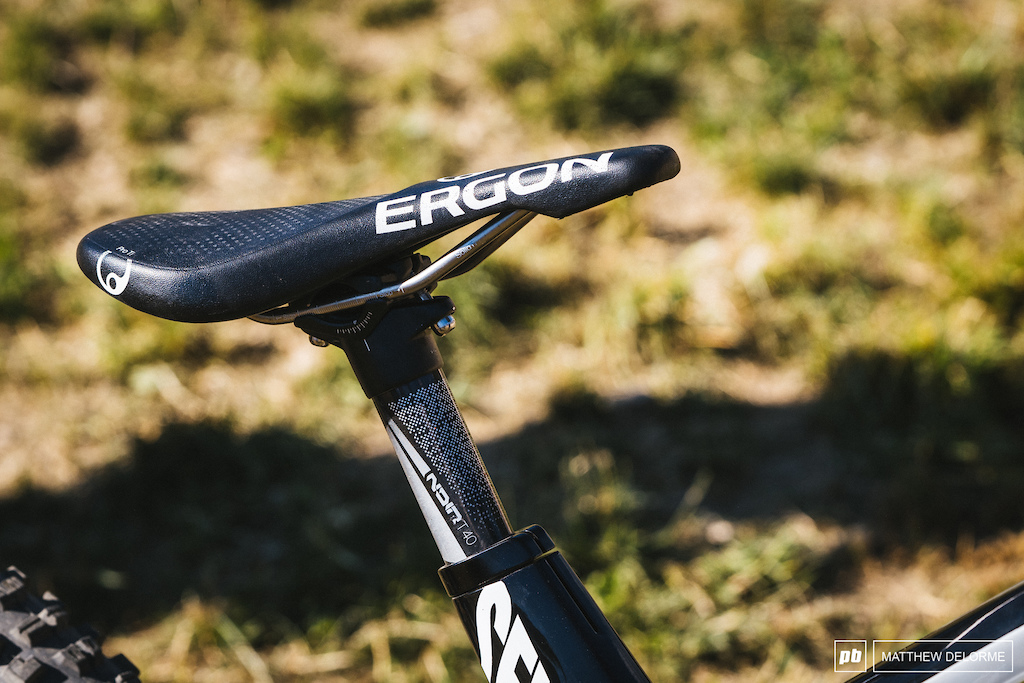 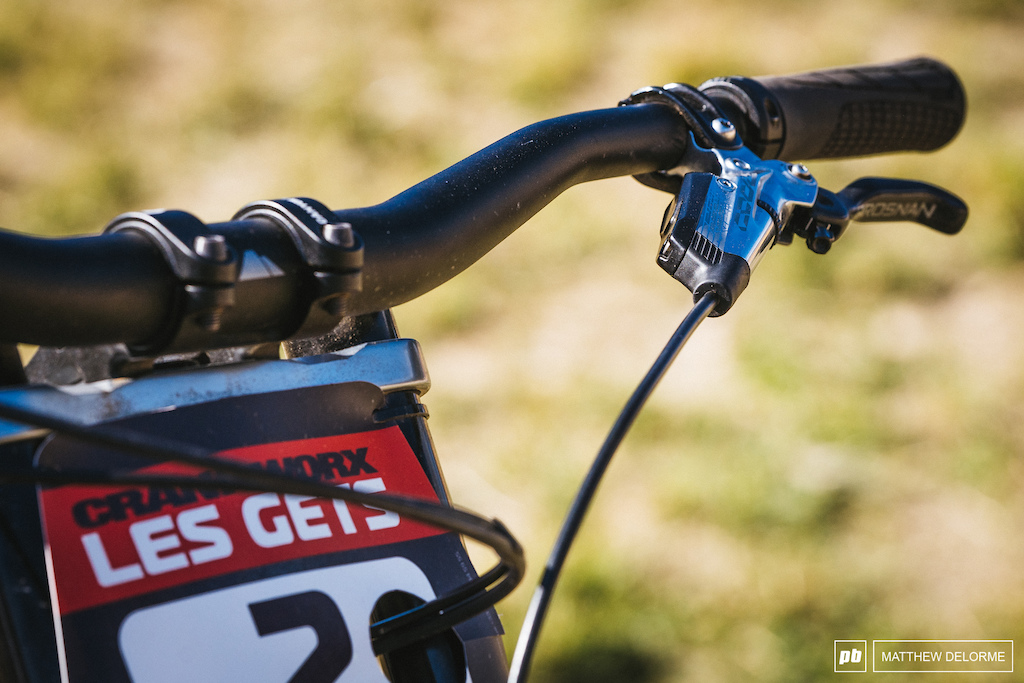 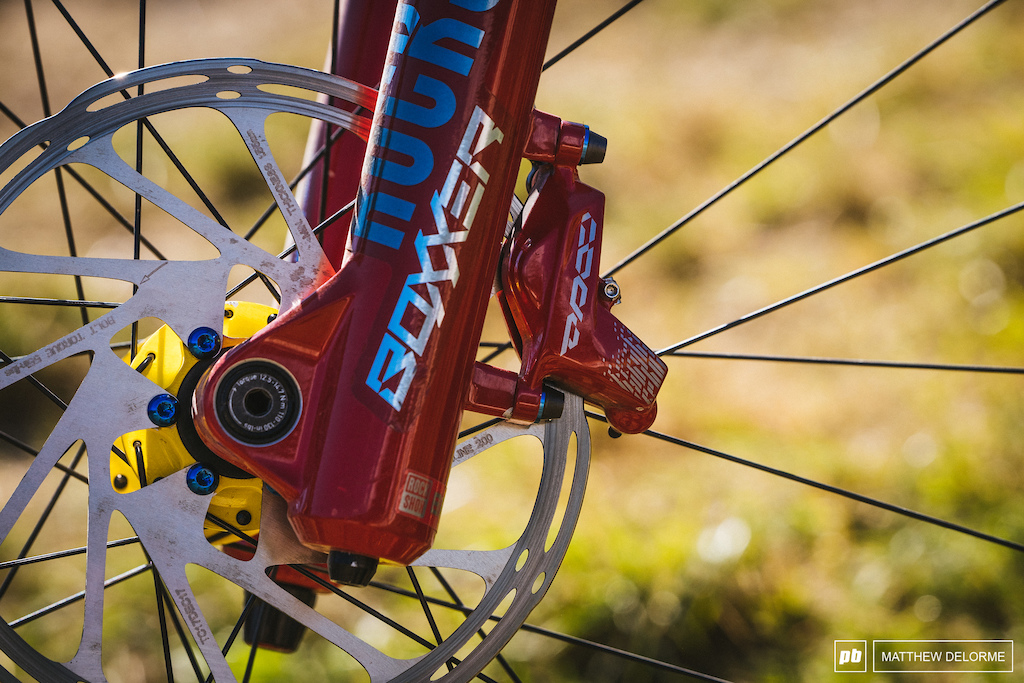 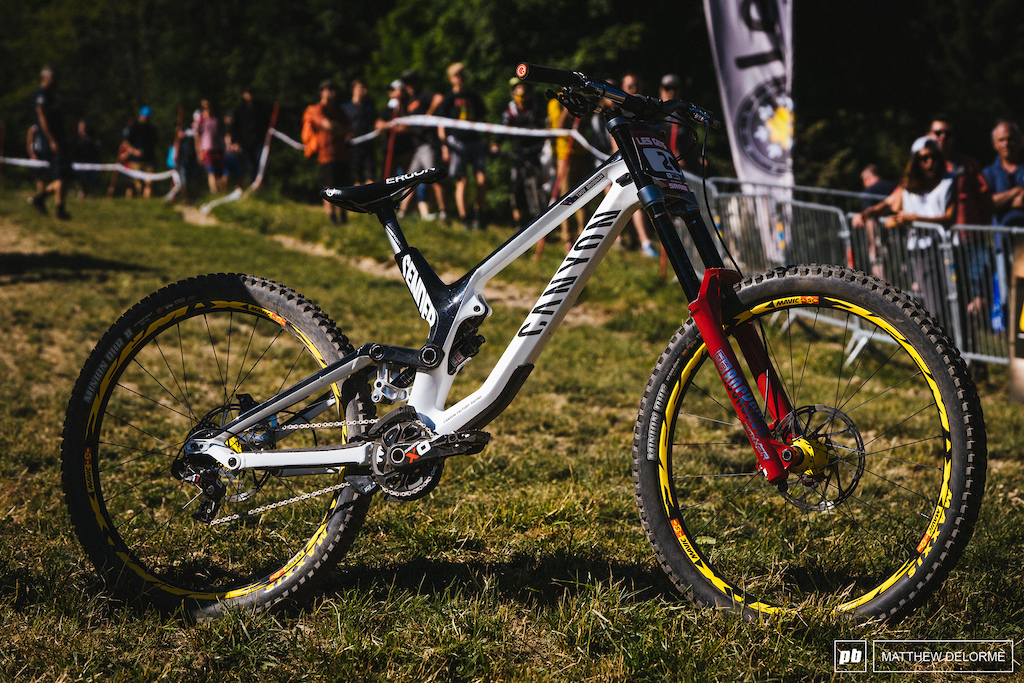 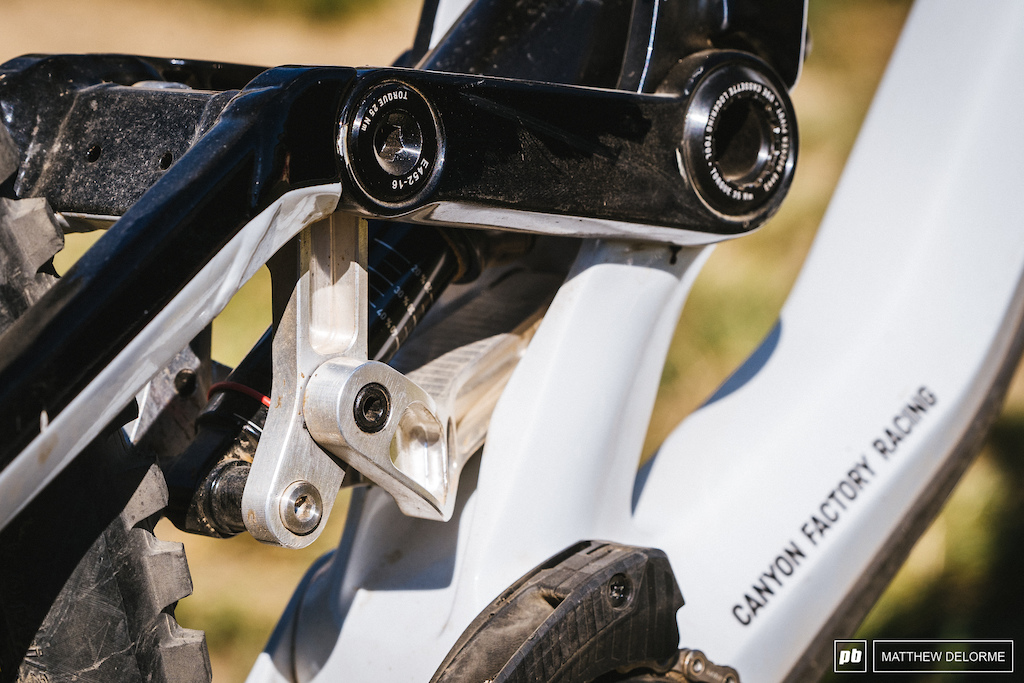 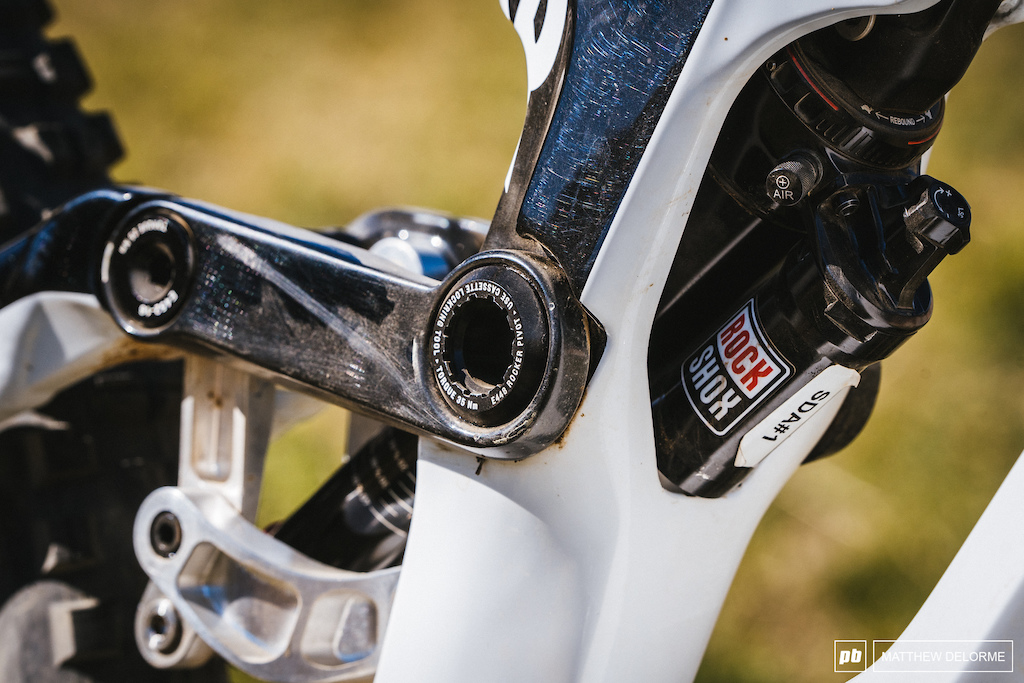 Troy has been using a bigger air can on the Super Deluxe air can to give a bigger negative spring volume, he also has a linkage that gives slightly more progression over the standard Sender. 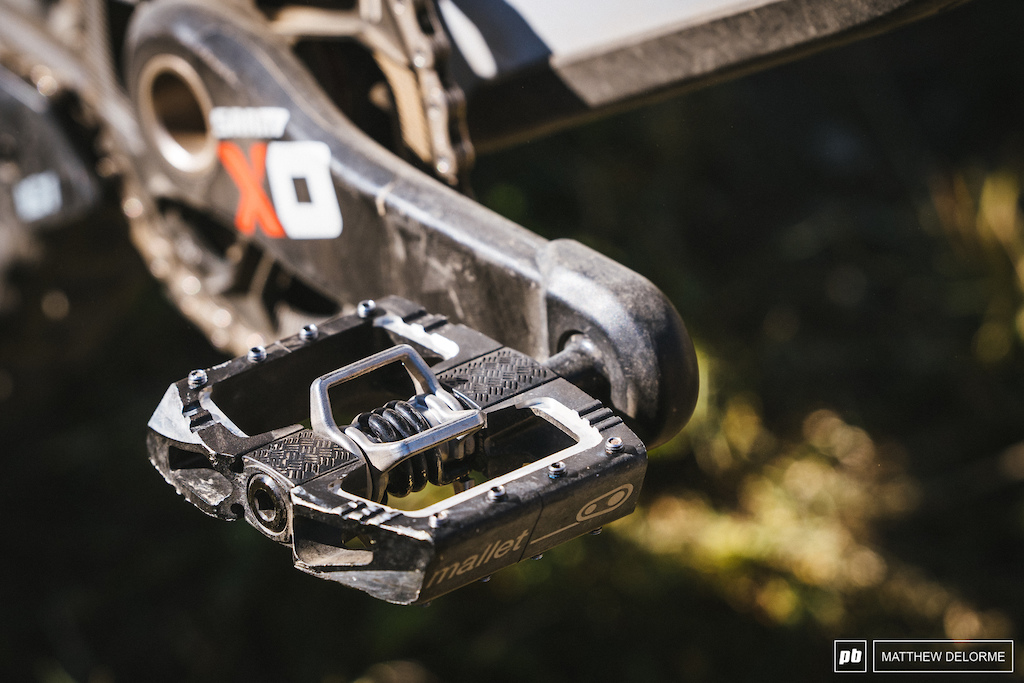 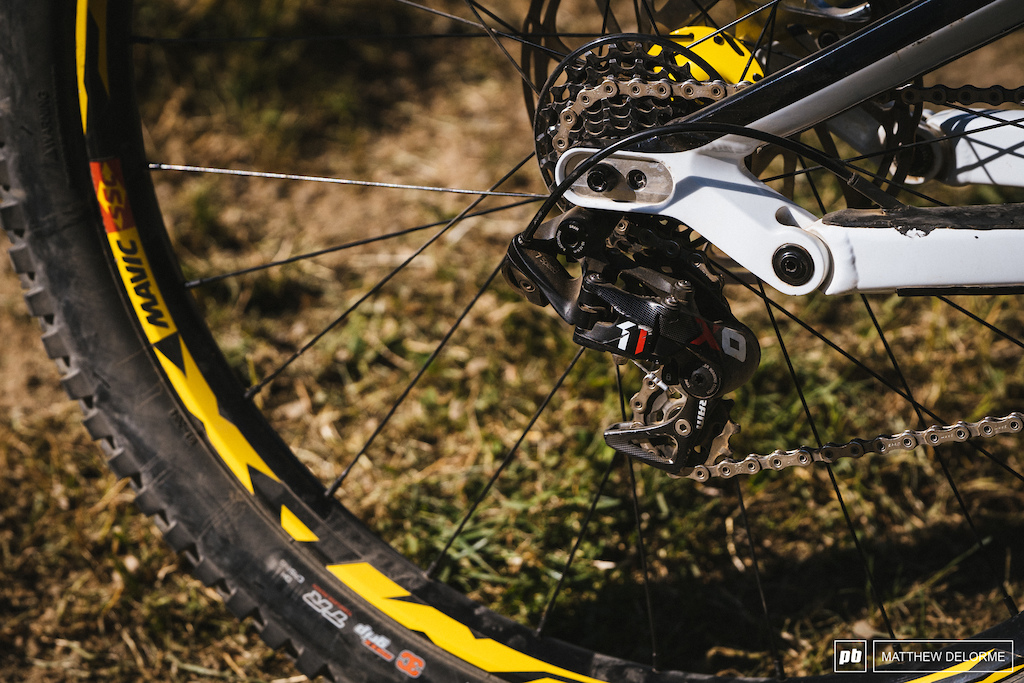 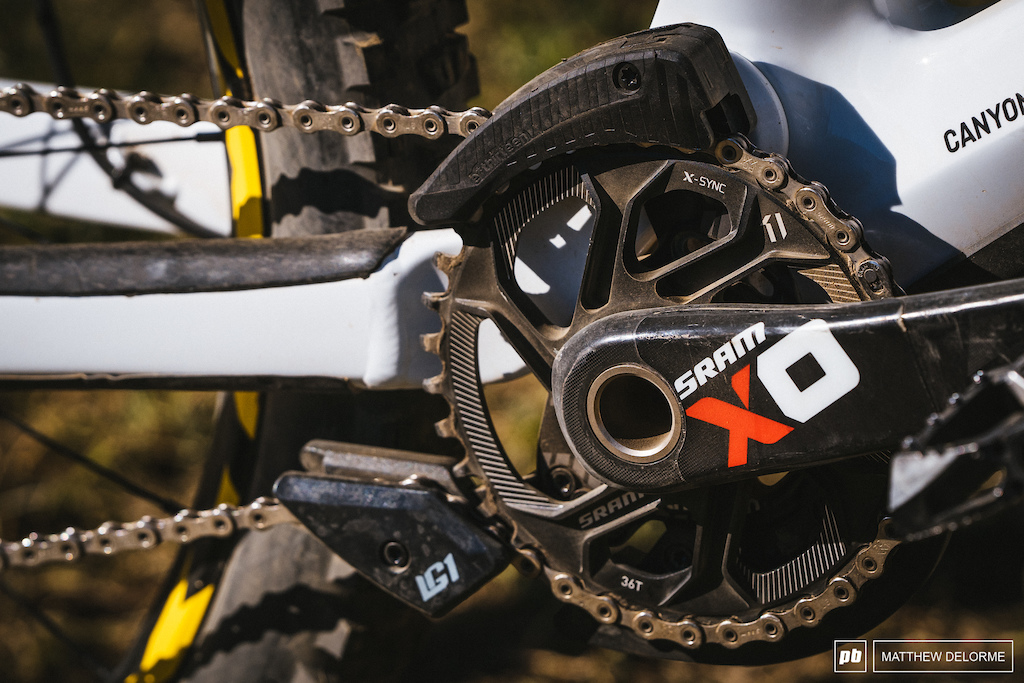 A standard X01DH 7-speed drivetrain and a 36t chainring upfront. 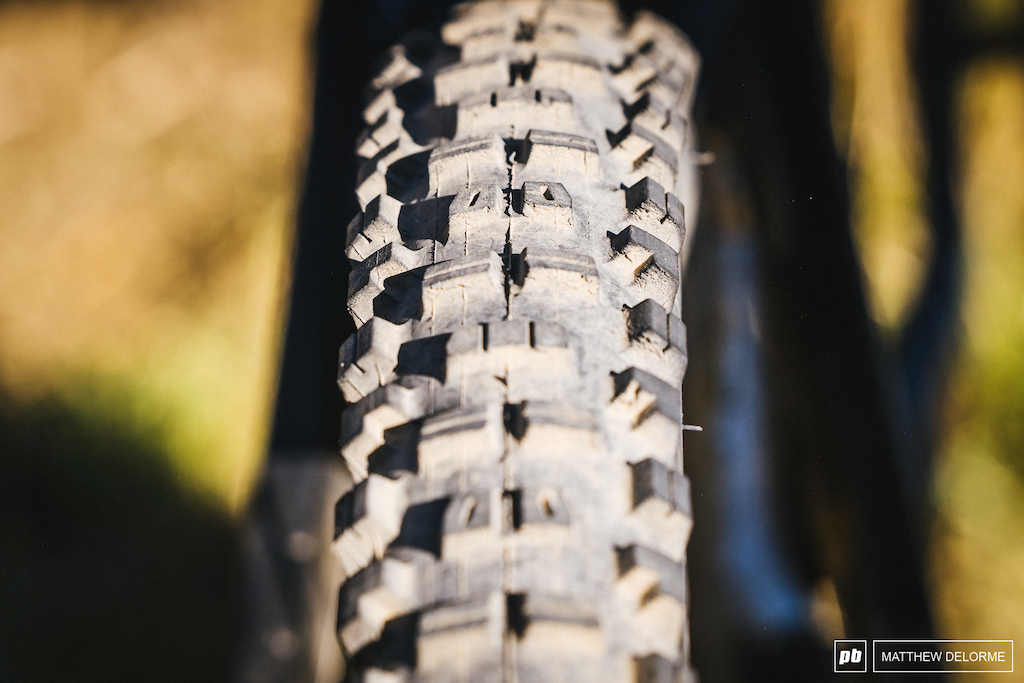 WAKIdesigns (Jun 23, 2018 at 15:23) (Below Threshold)
The mismatch of everything without a tiniest bit of pretentiousness is fantastic!

jaame (Jun 24, 2018 at 2:27)
@Randomscruff: I agree. The colours are going a bit far at the moment. It's like every company wants its own colour to separate it from the rest. We've got red, orange, blue that was green, yellow, purple, and gold that I can name off the top of my head. Not exactly easy to coordinate colours with all that mess!

HARv379 (Jun 27, 2018 at 17:39)
If you disagree that bike would look better without the yellow and red, well then, our design taste is way off. And those two colors just happen to be my least favorite colors.

NotAnotherClimb (Jun 23, 2018 at 15:47)
Yeah it was spoiled for me too. Sucks. They should black out the winner's name in the title til you mouse over it.

Those hubs look like another brand and just painted in Mavic yellow, or maybe Mavic just made some standard hubs for easily mounting test rims and decided that like all J-bend hubs, they are good enough?

redsled137 (Jun 23, 2018 at 18:31)
Not only that, the rims don't have the "fore" UST rim bed nipples, or the ISM milling between the spoke holes like the normal deemax. They have eyelets like normal mavic rims, but appear to be 28 holes, which none of the heavier rims are. Maybe they are a custom EN827, or some sort of prototype?

Some people claim to prefer j-bend spokes because they have a better/softer feel? But here he is with standard deemax last year? Hummmmm.

fecalmaster (Jun 23, 2018 at 16:06)
My bad, attempted to watch this morning but the delay was happening. Still haven't even watched it yet!

sevensixtwo (Jun 23, 2018 at 15:31)
I have mixed feelings on modern bike checks; on one hand the pros ride the exact same bikes we have access to, on the other, bike checks are boring with no truly custom aspects.

sevensixtwo (Jun 24, 2018 at 5:40)
Meh. Every team has alternate linkages, the can has a logo, so its prob not as custom as you think. And painted caliper? Please.

hasteTHEday (Jun 23, 2018 at 16:21)
Decreases break away force at the top of the stroke, increasing small bump compliance. Pretty much it works so that when the shock is fully extended the negative air chamber is trying to compress it, thereby making the shock sit close to an equilibrium at full extension. As soon as anything pushes on it it moves.

friendlyfoe (Jun 24, 2018 at 0:00)
Which I'm guessing he needs because he's running way higher pressures than the average person of the same weight.

There's no way Minnaar is running the same pressure (even within 2psi) as Bronson. Unless he's running a different casing.

Or are we saying single seaters should be running the same tire pressures as commercial vehicles?
Below threshold threads are hidden